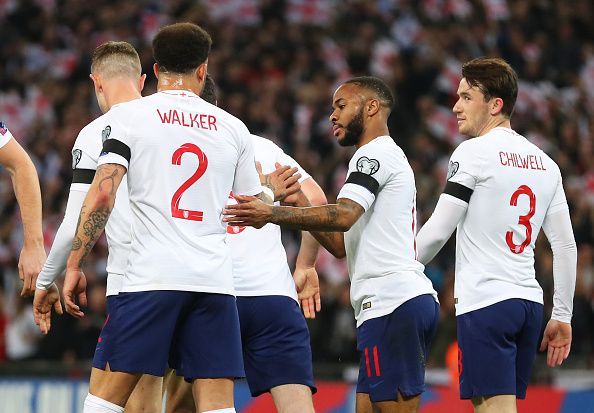 England cruised to a 5-0 win vs. Czech Republic, starting their EURO 2020 assault in style, but which players excelled while others struggled here?

England started their UEFA Euro 2020 qualifying campaign off to a flying start, after an emphatic 5-0 thrashing over a disappointing Czech Republic side at Wembley. In Group A alongside Montenegro, Bulgaria and Kosovo, England are expected to comfortably prevail and this victory will provide them with plenty of confidence with easier tests to come.

Raheem Sterling‘s hat-trick, coupled with goals from Harry Kane and a Tomas Kalas own goal sealed all three points for Gareth Southgate’s side – who were without key players and introduced more talented youngsters too.

Borussia Dortmund’s Jadon Sancho sparkled from kick-off, while West Ham’s Declan Rice and Chelsea winger Callum Hudson-Odoi made their senior debuts, impressing in cameo appearances from the substitutes’ bench in the second half. With all of that in mind, here’s a look at five hits and flops as England cruised to victory with an impressive showing at home on this occasion: 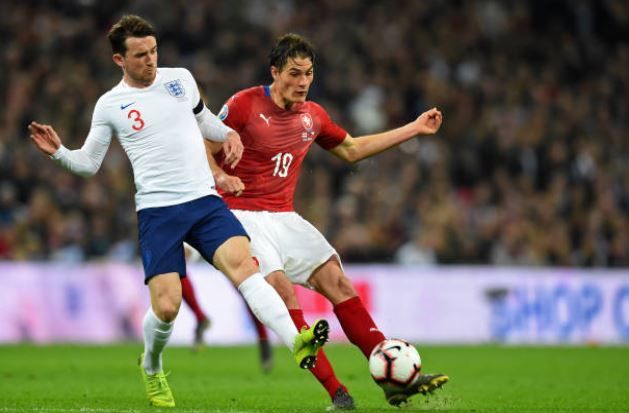 Schick, shackled for sustained periods, failed to justify why he’s such a highly-rated forward on this occasion

A player tipped for greatness, Patrick Schick’s struggles in the attacking third have been evident to see this term. After a breakthrough season with Sampdoria in 16/17, the 23-year-old was expected to flourish after joining Roma. Among better teammates and keen to justify the hype as one of the league’s top marksmen, so far he has failed to do just that.

Last season was understandable after suffering troublesome injuries, but this year he hasn’t kicked on either. Five goals and a solitary assist in 27 appearances (in all competitions) isn’t good enough for a player with his ability. So if anything, this international break could have proven a blessing in disguise for Patrick, in order to get away from the distractions and pressure at club level while linking up with compatriots and aiming to improve his goal tally.

Since his senior debut in 2016, he’s now made 15 appearances and netted five goals. He didn’t look like scoring on this occasion and instead, was quiet for sustained periods at Wembley against a determined England backline. Seen as the visitors’ main attacking outlet, he was effectively shackled by Harry Maguire and Michael Keane.

He won three aerial duels before being replaced with less than ten minutes to play, a stat only bettered by Theodor Gebre Selassie, Maguire (both 4) and Ben Chilwell (6). He relinquished possession on three occasions, committed two fouls and was booked for a cynical foul while only registering one hopeful strike from distance – which flew wide of the mark. Disappointing is an understatement: 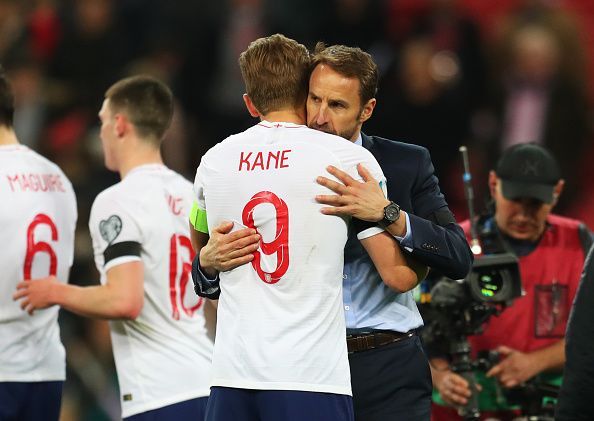 In a game where England created chances aplenty, Harry Kane only found himself on the scoresheet once: from the penalty spot.

However, this was an all-round impressive display from the 25-year-old, who showcased his unselfish tendencies in abundance and was duly rewarded for them. It was his smart pass into Sancho which set up their first goal, teeing up the teenager who had found space down the flank and was patiently waiting for the ball to arrive at his feet.

After Sterling was hauled down, he made no mistake to double England‘s lead from twelve yards before the break, powerfully smashing toward the bottom left corner despite Jirí Pavlenka’s best efforts.

He occupied a number of promising attacking positions and had his teammates been more aware at times, he probably would’ve had additional goals for his personal tally. Teeing up Sancho with a great chance near the hour mark, the teenager could only watch on as his effort was blocked near the goal-line by defender Filip Novak.

Sterling’s second was a prime example of his renewed confidence and composure in-front of goal, but Kane was alongside him and calling for the ball. On another day, the captain would have had a hat-trick and an assist for himself to boot. 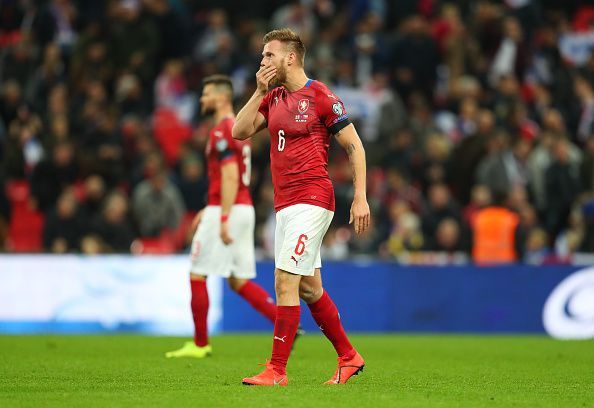 It was certainly an evening to forget for the defender, on-loan at Bristol City from Chelsea

It was certainly a night to forget for Tomas Kalas, who found himself left exposed as England broke with speed on numerous occasions. Despite the hosts’ dominance though, the 25-year-old’s own goal typified an eventful night for all the wrong reasons from a Czech perspective.

Overrun, outsmarted and crucially outplayed, they only had themselves to blame. Infrequent flashes of danger – mainly from set-pieces – were few and far between, while their defending was often either last-ditch or poorly timed.

The fact that between their four-man backline only one tackle was made speaks volumes in itself, but Kalas in particular stood out. Considering his dependable Championship displays this season are attracting interest elsewhere, he struggled under Wembley‘s bright lights here.

No tackles nor interceptions completed, he made seven clearances, won three aerial duels and made a block but it ultimately wasn’t enough to help his teammates keep the scoreline more respectable. His reactions were slow and he failed to sort his feet out quickly enough to avoid scoring in his own net after Hudson-Odoi’s effort was parried into his path by Pavlenka.

For his sake, he’ll be hoping prospective scouts are compassionate with their feedback after a defensive showing like this. 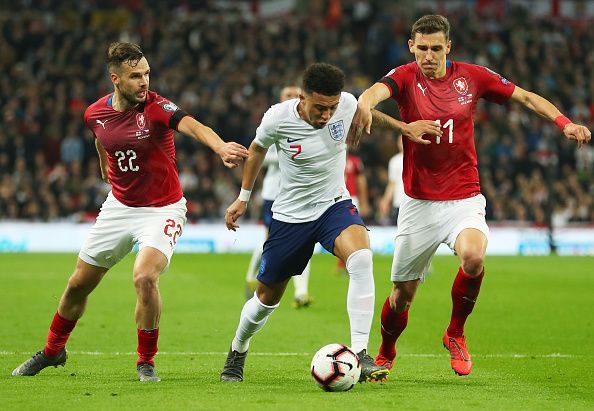 One assist, key passes galore, mazy dribbling, audacious skills and should’ve been on the scoresheet too – this was just another evening in Jadon Sancho‘s flourishing campaign so far.

If you didn’t know before, this display justified why Manchester United and Paris Saint-Germain are said to be interested in the teenager. He plays fearlessly and loves touches on the ball, relishing opposition challenges and almost taking each one personally in a way.

Having teed up Sterling at the far post with a clever pass across the box, he should have scored himself after half-time. Looking to return the favour for Kane on another England counter-attack, his eventual effort was thwarted by Filip Novak’s block near the goal-line.

There were many moments where he dazzled the crowd with his skills and composure, while others highlighted the fact he’s still got plenty of progression left – picking the wrong option or holding onto the ball too long in certain situations. A game-high four key passes (84.8% pass accuracy), one interception and assist. For someone so young and determined to already be as good as he is, that’s frightening. 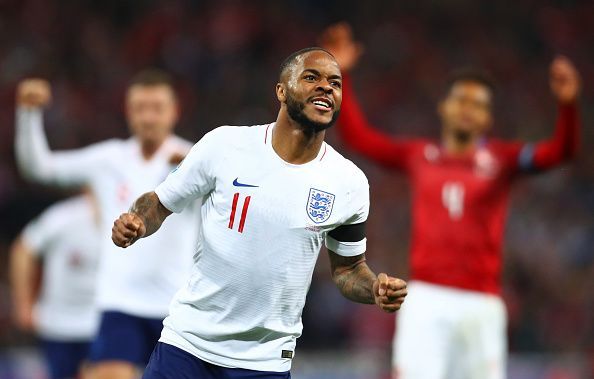 Three shots, three goals. One penalty won (and a consequent assist), 96.3% pass accuracy and a second hat-trick in the space of a fortnight. Not bad numbers for Raheem Sterling, who is going from strength-to-strength at both club level and on the international scene too.

His first was a smart finish at the end of a well-worked move, where he slid in at the far post to slot home from close-range. The second strike shows just how confidence can boost a player’s thought process, as he could have easily squared the ball to Kane or hesitated and seen the whole attack go to waste. Instead, his decision-making was razor-sharp and he was crucially assured, taking his time before curling home toward the bottom corner.

His third strike was fortunate, but you make your own luck. Firing goalwards, the effort took a wicked deflection on its way to goal but as it was going on target, it counted as his own.

The scariest thing is the fact that this wasn’t Raheem’s best display either. He was dispossessed on six occasions but crucially refused to relent and got the rewards his attacking play deserved. 42 touches in 70 minutes before receiving a warm reception when replaced – presumably being saved for another day – shows how he’s becoming more efficient in the final third with more exposure and experience in these situations.