The excellent Argentine has now taken his tally to 31 goals in Spain’s top-flight this term, after two goals after the break saw Barca maintain their 10-point gap over second-placed Atletico Madrid in La Liga.

His first was a deft free-kick, moments after former Barcelona midfielder Victor Sanchez was booked for a cynical challenge on Lionel as he shaped to shoot just outside the area.

He completed his brace just minutes before full-time, as Ivan Rakitic and substitute Malcom combined before the latter’s threaded pass into his path was perfectly weighted to beat Diego Lopez from close-range.

Espanyol defended well for sustained periods, even without much possession nor chances on-goal. There were plenty of fouls committed which broke up the game’s tempo despite Barca’s dominance in the final third.

This latest result sees the visitors just six points above the relegation places in 14th place. With all of that in mind, here’s a look at five talking points from Barcelona’s latest victory: 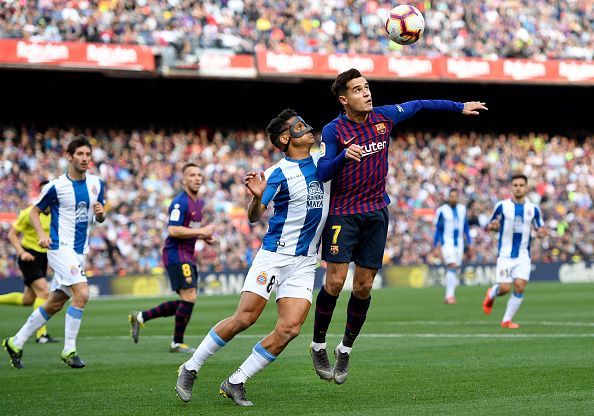 Coutinho was encouraging in flashes vs. Espanyol, performing defiantly despite suggestions he’ll be off this summer.

It was far from a vintage attacking display by the Brazilian, but Philippe Coutinho’s individual showing here was encouraging to watch.

He recorded two key passes – a joint game-high – while an 89.3% pass accuracy rate, two dribbles and one tackle completed show he was busier than you might expect starting on the left-hand side of their attacking trident. His decision-making was improved and a number of incisive passes went unrewarded.

To be critical though, he should have done better with his effort in amongst a goalmouth scramble, where he blazed high and wide. However, his attacking movement was troublesome and probing – though Ivan Rakitic’s shoot on sight policy meant promising attacks were wasted at times when Coutinho offered a better outlet in space.

On another day, he would have had a goal and assist to his name, but it’s an encouraging display from someone tirelessly linked with the exit door at Barca and is starting to play with the creative authority which convinced them to spend £105m (£146m after add-ons) for his services last January.

#4 Malcom with an encouraging showing off the bench 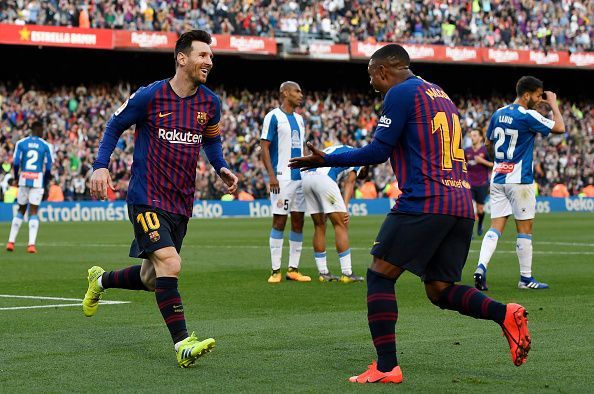 Just like Coutinho, Malcom has struggled to assert his quality since sealing a big-money switch to Spain.

Four years younger than his compatriot, the former Bordeaux winger conjured up an inspired display off the substitutes’ bench in the final half-hour on this occasion. He replaced Arthur as Ernesto Valverde opted for more attacking impetus with the scores still level at the time.

The fact he has only played 160 minutes of La Liga football this term speaks volumes in itself, though he’s sure to give Valverde a selection headache going forward if he maintains this consistency as an impact option.

Two key passes, 85.7% pass accuracy, 17 touches and crucially created the assist for Messi’s second goal late on – you could see what it meant to him during the celebrations and he’ll be hoping for more opportunities to assert himself as a real presence in Barca’s attacking plans moving forward. 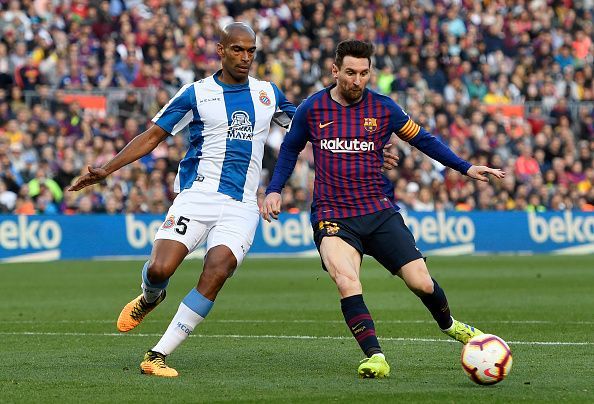 Collectively, Espanyol defended well as a team. However there was one player in particular who shone out beyond the rest and unsurprisingly, was involved in the Man of the Match voting too.

30-year-old Naldo. The central defender has sustained troublesome injuries and struggled for sustained minutes under his belt this season, but now started their last three fixtures and delivered his best against the league’s top side on this occasion.

The match statistics speak for themselves: two aerial duels won, three tackles, four interceptions and 11 clearances to go alongside two blocked shots. The Brazilian was everywhere within the visitors’ backline and needed to be too, stifling Luis Suarez while doing his utmost to keep Messi away from shooting distance where possible as part of a 5-3-2 formation. 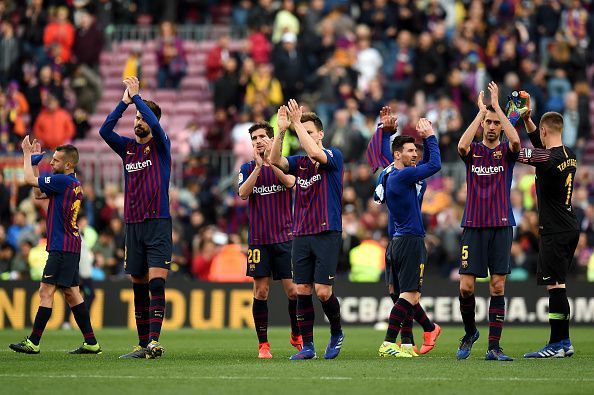 Why change a winning formula? Lenglet and Pique were solid as usual at the back for Barcelona, with Umtiti watching on

Plenty has been said about Samuel Umtiti and his repeated absence from Barcelona’s backline in recent weeks. After all, the 25-year-old has recovered from a long-term knee injury and been fit for the substitutes’ bench since their goalless draw against former side Lyon on February 19. However since then, he’s only made two league starts and featured for France in both their international fixtures this past week.

With the form of his compatriot Clement Lenglet and an experienced figure in Gerard Pique beside him, it’s difficult for Valverde to just drop either player because of Umtiti’s return – despite the dependable presence he is at the back.

This display in particular from both players proves why it’s proving more difficult for Umtiti to quickly earn his starting berth again. Lenglet was quietly excellent, breaking up play whenever Espanyol threatened and made a number of important defensive interventions to relieve pressure on his teammates in transition.

As for Pique, he was typically cool and composed in possession – even under pressure from opponents. The pair combined for four tackles, two interceptions, seven clearances and one blocked shot between them and kept the visitors to half-chances, leaving Marc-Andre ter Stegen with little to do throughout. Why would you change a winning formula right now? 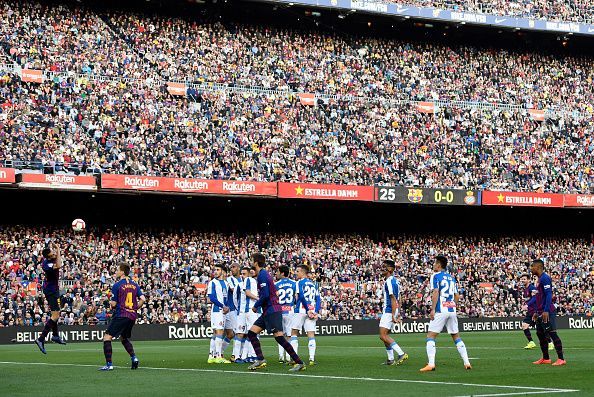 What more can be said about Messi? He was sharp from the first whistle and lead by example with regards to intensity, threatening Espanyol’s backline wherever possible and completing dribbles aplenty to provide width, creating chances or space for himself to strike goalwards.

A game-high ten dribbles, you might have been cautious that they led to no final product with the score still finely poised after the hour mark. A few near misses and important defensive stops meant Barca were still patiently probing for a breakthrough, until their talisman was fouled on the edge of the box.

A cynical but necessary foul by Sanchez inadvertently presented Messi with a better opportunity to break the deadlock. He did that with delicate ease, a Panenka style free-kick which floated above the wall and took advantage of Diego Lopez’s poor starting position to guide towards the right-hand corner.

Despite his and ironically Sanchez’s best efforts on the line, it bundled in over the line and Espanyol were punished ruthlessly. Messi wasn’t done there, either. He remained composed to convert from close-range after Rakitic and Malcom combined on the counter-attack, started by ter Stegen’s forward-thinking throw, to double Barca’s lead and seal all three points.

Barcelona were dominant but didn’t have the goals to show for their display in the final third. Messi, as he so often does, came up clutch when needed most to propel them ever closer to a second successive La Liga title and four in the last five years.