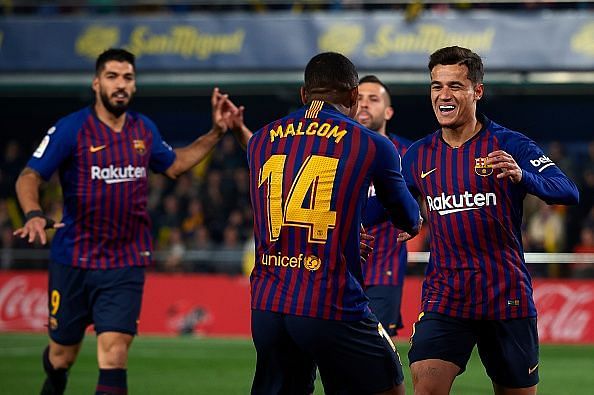 Malcom scored and created another on his first Barcelona start of 2019 in an eight-goal thriller vs. Villarreal, but what does it mean for the Brazilian after a difficult first season in Spain?

Barcelona, who raced into a two-goal lead after 15 minutes against La Liga strugglers Villarreal, had to rely upon last-gasp efforts from Luis Suarez and Lionel Messi to salvage a point during their 4-4 pulsating draw at Estadio de la Cerámica yesterday evening.

The result leaves them eight points clear with eight games to play, although they host second-placed Atletico Madrid on Saturday in a potential title decider.

Despite some suspect defending in a second-half goalfest, Barca recovered a two-goal deficit late on: meaning naturally Suarez and talisman Messi will be showered with plaudits for their late heroics. After all, they have only lost twice in 2019 to date – both Copa del Rey first leg fixtures – while their last league defeat was a surprise 4-3 loss against Real Betis in November.

However, there was one player in particular who stood out and needed to, being granted an opportunity to stake his claim for a regular starting berth. Malcom, who started in their loss vs. Betis, has only made three starts (across all competitions) since that date.

It’s a remarkable statistic when you break down the numbers further – having signed from Bordeaux for £36.5m last summer, chances have been limited for the Brazilian to prove his worth as part of a star-studded Barcelona attack.

Yesterday presented an opportunity to provide Ernesto Valverde with an unwanted selection headache, ahead of tougher fixtures to come. His individual display did precisely that too, essentially from kick-off. 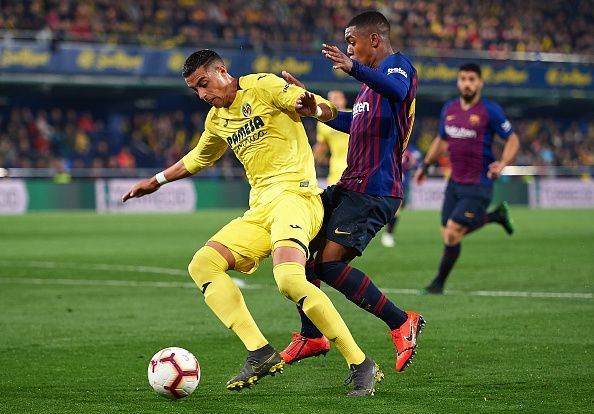 It was his infectious pressing which forced the hosts into relinquishing possession, while he was comfortable on the ball and made good decisions under pressure. Deployed on the right-hand side of their 4-3-3, he either looked to cut inside or stretch Villarreal’s backline along the flank – while willingly dropping deep to create spaces too.

He created his second assist in as many games, following an inspired cameo this past weekend against Espanyol. Just like on Saturday, this was a well-worked move and Sergi Roberto’s defence-splitting pass was met with good control by the Brazilian, who accelerated goalwards and teed up compatriot Philippe Coutinho with his weaker right foot. With the goal gaping, the former Liverpool man simply couldn’t miss.

Then just three minutes later, he got himself on the scoresheet with a well-taken header at the far post to double Barca’s lead. Arturo Vidal’s inviting delivery was met by the winger, who showed great anticipation and attacking awareness to evade two defenders before steering his effort back across goal, leaving goalkeeper Sergio Asenjo helpless. 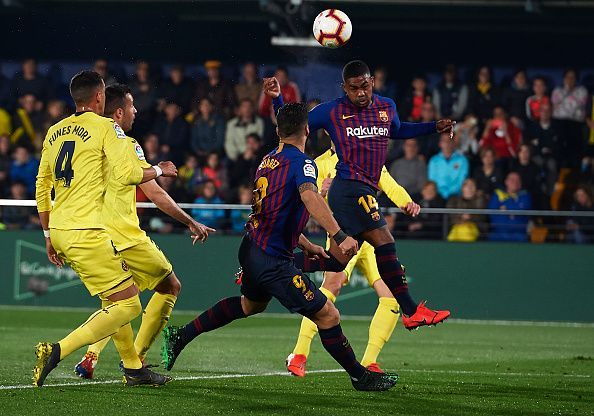 Combining with Coutinho and Suarez in the final third where possible, he created promising chances for Arthur and Samuel Umtiti. On another day, he would’ve had a hat-trick of assists in the first half.

As Villarreal got themselves back into the match and into the lead, Malcom’s influence understandably lessened. He was still ever-present on the flanks and although they were aware of his threat, his intelligent movement and positioning was key as he continued creating chances – essentially hugging the touchline down the right-hand side.

Rather than trying to shoot on sight or adopting a more selfish approach in attacking situations, he’s clearly learning the Barca style. Passing where possible and being more selfless is allowing him to acclimatize to their playing style much quicker too, allowing teammates to trust him more.

Only Santi Cazorla (8) had more than Malcom’s four key passes over the 90 minutes. With 85.4% pass accuracy, two completed dribbles, a goal and assist, Valverde certainly has decisions to make going forward.

Former Bordeaux boss Gus Poyet, who worked with Malcom during his short-lived spell in France, spoke highly of the Brazilian last summer and performances like these justify why he needs to play more regularly.

In the next two-and-a-half weeks, here are Barca’s upcoming fixtures:

Goalscorer Coutinho has been encouraging but isn’t exactly on top form at the moment. Ousmane Dembele (hamstring) is facing a race to be fit for their Champions League encounter but too has been inconsistent this term, so now presents a great opportunity for Malcom to earn an extended run in the side as they target the elusive quadruple this term.

He can play on either flank, left or right – but needs more minutes and experience under his belt in order to kick on now. Watching on from the sidelines can only help so much, he needs to be given time and patience to apply himself and contribute to one of the world’s best attacking frontlines.

Otherwise, what was the point in signing him? He’s better than the role of an impact player and with the club’s transfer policy shifting towards youth in recent seasons – incoming additions Frenkie de Jong and Jean-Clair Todibo being prime examples – it’s futile unless those players are utilized effectively and given time to integrate into the club’s demanding but rewarding nature.