A quick-fire double late on courtesy of Luis Suarez and Lionel Messi broke Atletico hearts, to extend Barca’s La Liga lead to 11 points in dramatic style – essentially sealing the title against their closest rivals in the process.

Diego Costa’s sending off just before the half-hour mark sparked an already feisty affair, in a must-win fixture for Atletico Madrid: if they wanted to keep their faint title hopes alive.

Jordi Alba and Philippe Coutinho both came close for the visitors, before Costa’s crazy moment saw him sent off after an extreme case of dissent towards referee Jesus Gil Manzano.

Costa needlessly sees red as Atleti down to ten

Despite player protests and the resultant bookings that ensued, Atletico had a numerical disadvantage to deal with – Costa’s moment of madness would later prove costly.

Colombian fullback Santiago Arias was enjoying a decent outing up to this point, but Costa’s dismissal saw him replaced by Angel Correa in the first of two attacking changes by Diego Simeone. Álvaro Morata came on too just before the hour mark, on in Filipe Luis’ place – combining with Antoine Griezmann and Correa to form a 3-3-3 type formation.

Jan Oblak continued his goalkeeping heroics and needed to, as Barcelona persisted in their attempts to break the deadlock. Suarez, Messi and second-half substitute Malcom all tested the Slovenian international – who was both composed and equally imposing against a Barca side keen to capitalise. 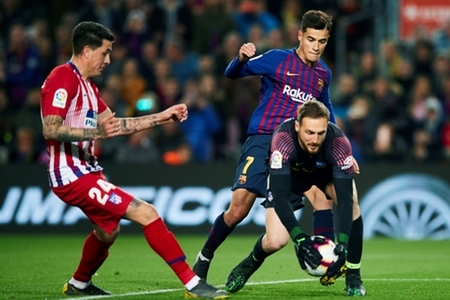 Atletico worked tirelessly off-the-ball, with the likes of Saul Niguez and Godin picking up cynical – but necessary – bookings while attempting to frustrate Barca in transition. Jose Maria Gimenez excelled alongside his compatriot and needed to, but after yet more substitutions and time running out, Barcelona turned on the style.

The overlapping Jordi Alba teed up Suarez with a pass across to the edge of the box. As Thomas Partey trailed, he took one touch to control and another to set himself before unleashing a curling low effort into the bottom corner.

Oblak, the visitors’ best performer, did his utmost to stretch down and claw away the Uruguayan’s effort, but could only watch as it cannoned in off the far post.

If that wasn’t enough, Barca were then presented with the opportunity for an emphatic second – as Lionel Messi doubled their lead less than a minute after the restart. Ivan Rakitic’s clever probing pass set the Argentine through on-goal and despite Gimenez’s best efforts, Messi made it 2-0 with a subtle finish into the bottom corner from close-range.

Atletico, for all their hard work and determination with ten men, found themselves undone by two moments of magic. Now they find themselves 11 points off top spot with seven games left and it’s clear they need to consolidate second place more than chase Barca any longer.