Recent reports suggest AC Milan are planning a shock approach for Tottenham boss Mauricio Pochettino this summer. Is a move to Italy something he should consider, given Tottenham’s financial flaws and lack of success in recent seasons?

Reports on Sunday claimed the Serie A giants are considering a move to tempt him away from the Premier League – which isn’t as surprising as it seems. After all, they are eager to push themselves back among Europe’s elite.

Milan eager to develop – why not target pochettino?

For all of Milan’s fame and illustrious success over the years, they have stalled under Gennaro Gattuso this term. Their 2-1 defeat by defending champions Juventus on Saturday leaves them in a vulnerable position as far as their European aspirations go this season.

Atalanta in fifth place are level on points (52), while AS Roma (51), Lazio and Torino (both 49) also harbour European qualification hopes this term. With many underperforming players who need to be replaced by better quality, they’re reportedly prepared to offer him £300m as part of a bumper transfer warchest to compete on all fronts going forward.

Tiemoue Bakayoko’s loving life in Milan, while red-hot forward Krzyztof Piatek has excelled since a January move from Genoa – but many players have struggled for consistency this season. There’s a reason why they finished third in a Europa League group among Real Betis and Olympiakos, two beatable sides. 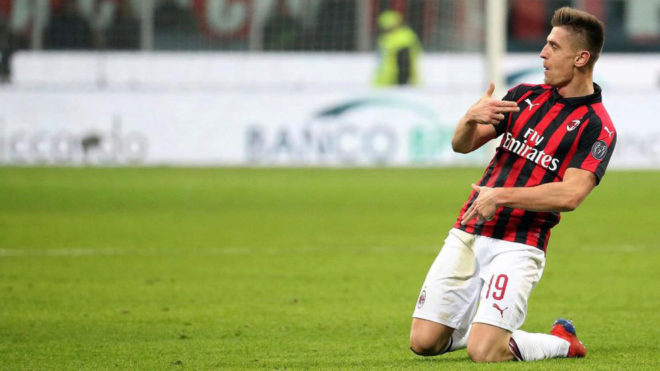 Piatek has netted 29 goals in 34 appearances (all comps) for Genoa and Milan this season, but quality is not in abundance

Former Arsenal chief executive Ivan Gazidis, who left the club last year, will want to be accompanied by familiar, top-quality company. Pochettino has already been linked with Real Madrid and Manchester United in recent months, something Daniel Levy and Spurs’ press team have been eager to shoot down.

Despite admitting he’s flattered by links surrounding his future, Tottenham’s new state-of-the-art stadium and promises of improved funds to challenge their title rivals is what Levy hopes can ward off interest from suitors. After all, Pochettino used Southampton as a stepping stone to sign for Spurs back at the end of the 2014/15 campaign. Who’s to say that four years later, history doesn’t repeat itself?

His existing deal in north London expires in 2023, so Milan would need to agree a significant compensation sum to buy out his contract – even if he was open to leaving early.

Tottenham’s progression under the Argentine has been evident since his appointment. Establishing their top-four credentials, acquitting themselves well with valuable lessons learned in the Champions League, there’s still a serious problem that needs addressing. They seem no closer to their title rivals than you’d expect from a side constantly on the up.

Kyle Walker jokes with former boss Pochettino, having left Tottenham for £50m – to win the PL title the following season at Manchester City

They finished third last term, 23 points behind eventual winners Manchester City. The season before, they finished second to champions Chelsea – a seven-point gap between themselves and their London rivals. Their best opportunity to win a title was undoubtedly 2015/16: they finished third in a two-horse race, with surprise package Leicester City finishing eleven points above Spurs.

With six matches left to play, only three points separate themselves in third place and Manchester United in sixth. Liverpool (82) and Manchester City (80, game in hand) are both leading the pack comfortably, so you get the picture.

Are they really improving as much as it seems? Pochettino himself has revealed his desire to sign world-class players like Paulo Dybala – who would never join Tottenham under their current financial climate with regards to wages and their transfer policy.

Kyle Walker’s departure and consequent Premier League title success, is something Pochettino should look to emulate if given an opportunity to. Tottenham, for all their development in recent seasons, will not have the financial firepower to compete with rivals for the world’s best on the transfer market.

It’s why they have to unearth gems and improve their own shrewd signings. Creative midfielders Christian Eriksen (Ajax, 2013) and Dele Alli (MK Dons, 2016) are perfect examples – their progression has plenty of interested suitors, Real Madrid et al, continuing to keep tabs on them.

Tottenham currently find themselves in a better position to Milan, though things can change quickly in a matter of months. All things considered, it seems inevitable that he will leave Tottenham for a better or bigger side in future should things continue as they are.

If he were to leave England, where he’s heralded as one of the world’s best coaches, it’d be a risk regardless of the destination. Going to Italy though, where he’d have different targets, competition – Juventus and Napoli – as well as another language to learn, you have to ask: Is it worth it? Right now, no.