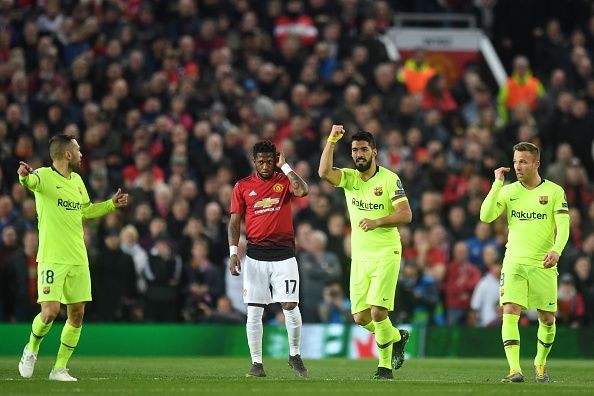 Barcelona earned a slender 1-0 win over Manchester United in their UCL quarter-final first leg tie. Here are five talking points from their victory…

Barcelona recorded a slender yet important 1-0 victory during their Champions League quarter-final first leg against Manchester United at Old Trafford last night to take an away goal with them, ahead of next week’s return leg in Spain.

Barca, who are 11 points clear atop La Liga, were far from their best but one moment of quality separated the two sides in Manchester. Lionel Messi‘s clever pass into Luis Suarez saw the Uruguayan head back across goal, with Luke Shaw inadvertently getting the last touch as the effort trickled into the far corner after 13 minutes. Despite initially ruling the goal out for offside, it was awarded after VAR review showed Suarez was onside as the ball was played into his path.

Despite flashes of their counter-attacking threat, United failed to register a single shot on target – the first time that’s happened in a Champions League home game since Opta started recording match statistics back in 2003.

Ernesto Valverde’s men have only lost once at home all season, against Real Betis back in November, so Ole Gunnar Solskjaer’s men certainly have their work cut out if they are to replicate their Paris heroics in the second leg. With all of that in mind, here’s a look at five talking points from a telling evening’s work in Manchester: 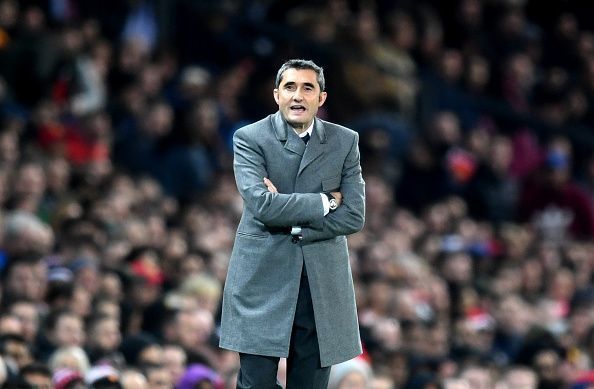 Valverde watched his side struggle for balance in midfield, but his alterations did nothing to rectify the issue

With a one-goal lead to protect and his side struggling to balance in midfield, Valverde opted for the conservative approach of replacing Philippe Coutinho and Arthur with Arturo Vidal and Sergi Roberto. Arthur was one of Barca’s better performers and Coutinho still possessed an attacking threat even though his influence on the game weaned. So why not replace the clear weak link in midfield, Busquets, who had already been booked?

Why not try something different and utilise the more creative subs available, like Malcom or Ousmane Dembele? The pair would have added width and blistering pace at a time where the visitors needed to stretch United. Valverde’s bravery probably would have resulted in a killer second goal at Old Trafford.

Instead, he brought on the error-prone, short-tempered Vidal, who got himself booked pretty soon afterwards and was committing fouls like they were going out of fashion. Rather than being a calming presence in midfield, the experienced Chilean was reckless and caused panic among his teammates – something United could sense in their attempts at a comeback.

Roberto made a few intelligent darting runs into the final third and having been fed by Messi, probably should have done better to double their lead – but his decision-making was poor. Vidal almost gave away a penalty for a reckless attempt at challenging Chris Smalling, jumping awkwardly without playing the ball in the box and Valverde’s safe substitute decisions nearly cost Barca their slender win.

#4 United’s defence tested, but how did they fare? 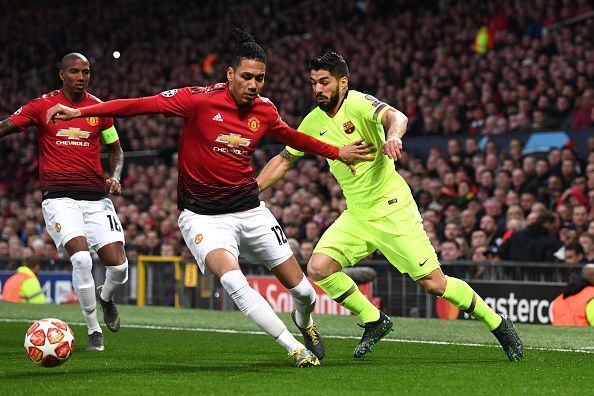 Smalling and Young endured a difficult 90 minutes, even against a below-par Barca attacking display

Playing against one of the world’s best attacking tridents, which just happens to include Messi, was always going to be a tough ask for United’s backline to contend with.

Collectively, they did well to shackle individual players for sustained periods and frustrate them too – but a slow start proved costly as Barcelona’s increasing pressure finally told after well-worked moves through midfield early on.

Shaw, one of the club’s best performers this season, was unfortunate to have an own goal chalked next to his name. He watched helplessly as Suarez’s headed effort flicked off him on the way through, but the full-back defended well for the most part – especially to perfectly time a last-ditch recovery tackle on Sergi Roberto – which is much easier said than done. Especially when you’ve been booked after 20 minutes and will miss the return leg through suspension next week.

As for the centre-backs Smalling and Victor Lindelof, they had to constantly remain alert and were kept busy throughout.

Smalling was penalised for an overzealous nature when launching into tackles and also booked. His cynical yet no-nonsense approach would have been more beneficial if not playing against crafty opponents, who are aware of United’s physical style in trying to frustrate Barca’s playing style. His five fouls committed was a game-high and truthfully, he – just like Busquets – was lucky to stay on the pitch.

Ashley Young struggled to retain possession, his crossing was wildly inaccurate (3 of 11 successful) and endured a difficult night, while Diogo Dalot had an encouraging outing but was made to predominantly act as support for Shaw with an overlapping Semedo making himself a problem to defend against. 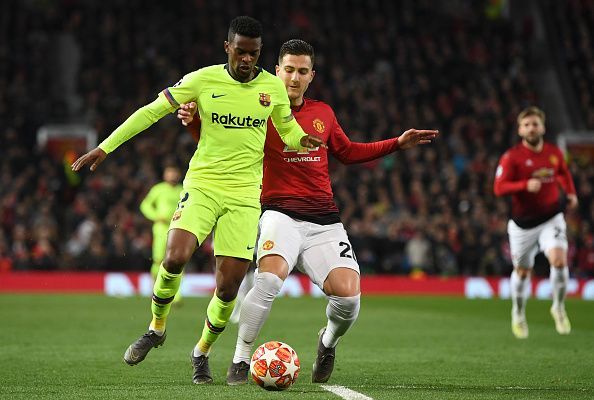 Semedo relished his battle with Dalot down the right, provided width and was defensively sound

Semedo certainly picked the opportune time to deliver one of his best performances this season and despite Barca’s creative struggles, the Portuguese international was unfazed on both sides of the pitch.

Alongside Gerard Pique, the 25-year-old was comfortably the visitors’ best performer on an evening where they didn’t have things all their way and needed dependable players to step up to play them out of difficult situations.

Semedo ran throughout, causing Dalot and Shaw problems down the flank while proving composed defensively and making important interventions when called upon. He provided width, created chances with intelligent passes too and should’ve had an assist, if not for Suarez’s wastefulness in front of goal.

His acceleration and determination to win 50/50 duels proved key in helping Barca play their way out of tricky situations, meaning he was a reliable outlet and oozed class that we haven’t seen too often from the former Benfica full-back. 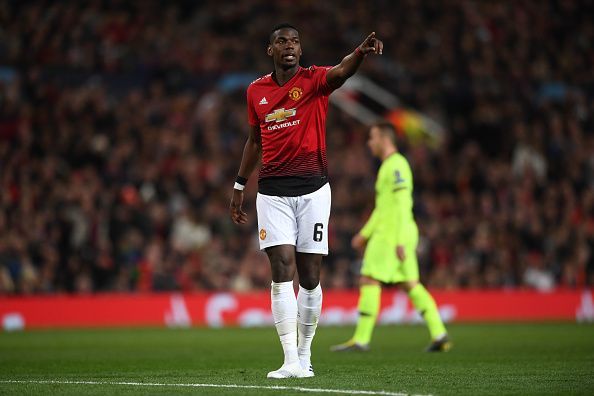 Pogba showed flashes of his quality, but they were infrequent in a game he needed to stamp his authority on

In a game of such magnitude, this was precisely the stage for Paul Pogba to impose his quality. Just like during their first leg defeat to PSG in February, his flashes of brilliance were just too few and far between.

With Busquets on a booking, you’d have been excused for expecting more from the Frenchman. He displayed his excellent passing range with some searching balls out wide and into the danger areas, but failed to grab the game by the scruff of its neck and dominate like we know he’s capable of – which was frustrating to see.

He started slowly and was clearly being man-marked off-the-ball as Barca looked to lessen his impact, though his movement wasn’t particularly sharp and didn’t warrant much faith from team-mates to drive forward either.

As for Rashford, it was a disappointing showing. He threatened with his blistering speed and direct nature but endured a poor evening in-front of goal – failing to test an alert Marc-Andre ter Stegen while also struggling to connect cleanly with any of his four attempts on goal. In matches like these, one needs to be more clinical and the fact Ter Stegen had no shots to save just isn’t good enough, not least at home against an underwhelming Barca display like this one was.

His brilliant ball into the box should have been rewarded with an assist after Dalot’s header flashed across goal, but in a game of such fine margins, he’ll know improvement is needed while showing more composure in such promising attacking positions. 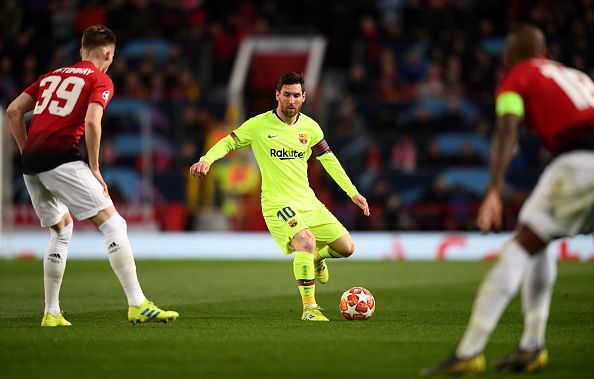 Messi was often quiet but effective, dropping deep to collect the ball and create chances

Suarez will be unhappy about not ultimately getting credit for Barca’s winning strike, but the Uruguayan endured a difficult evening’s work overall. Shackled well and often left isolated in attack by the Lindelof-Smalling pairing, he spent more time complaining to officials rather than doing what he does best – linking up play, creating chances and leading the frontline like the world-class forward he is.

He was dispossessed far too often and easily (game-high 8 times), dropped deeper to get the ball and often cut a forlorn figure in attack as teammates were aware of his struggles in possession.

Livened up after the inclusion of Roberto in the second-half and proved a pest as he usually is, but was wasteful in front of goal and didn’t do enough. Suarez should have scored after Semedo’s clever pass in the second half, but instead, he struck the side netting from close-range.

Messi, who can change games in an instant, was also left frustrated. It was his clever pass into Suarez which set up the goal, although the Argentine’s influence declined as United grew into the game.

Not receiving the ball as much as he would have wanted, when he did it was in deep areas. This allowed Scott McTominay and Fred ample opportunity to harry him into mistakes or playing it safe with passes, where he’d normally look to run at opponents and dribble beyond them with ease.

Despite flashes of his brilliance; the quality of passing, creativity in-and-around dangerous areas, intelligent movements which made it difficult to track him, he was clearly shaken up after Smalling’s forceful challenge and only really got involved again once Sergi Roberto was introduced.

He needed more forward runners in support and against United, who were starved of possession for sustained periods, he couldn’t afford to weave his magic for fear of losing the ball in a promising position and gifting the hosts a good counter-attacking chance. They defended harder and tighter, although his quality still shone through and he should’ve had an assist – but for Shaw’s excellent recovery tackle to thwart Roberto closing in on goal.

Busquets, who has been off-the-boil in recent weeks, continued in similar vein on this occasion. His passing was sloppy and he committed a number of needless fouls – gifting United players a reason to run at him from the first whistle.

Rushing into tackles, he was booked after 15 minutes and struggled to cope against the Fred/Pogba combination play in midfield. Clearly the visitors’ weak link, he improved slightly in the second-half but it still should have been him substituted, not Arthur, although fortunately from his perspective, Barca came through unscathed.