Moise Kean continued his excellent goalscoring form while former Arsenal youngster Stephy Mavididi made his competitive Juventus debut, during their surprise 2-1 away defeat by SPAL earlier this afternoon.

Kean, who has now scored in six consecutive games for club and country, broke the deadlock after 30 minutes – applying the finishing touch to convert Joao Cancelo’s speculative effort beyond a helpless Emiliano Viviano.

STAT: By doing so, Kean became the youngest player to score in four consecutive Serie A games, surpassing Mario Balotelli’s record in the process.

He could’ve had a first-half hat-trick though: Thiago Cionek’s important intervention halted him as he lurked in the six-yard box, before Juan Cuadrado opted to go alone rather than tee him up unmarked, running into traffic and ruining a promising opportunity.

Their missed chances proved key as SPAL recovered after the interval, with defender Kevin Bonifazi outjumping Rodrigo Bentancur to head home their equaliser before Sergio Floccari coolly slotted home in the bottom corner after Hans Nicolussi was swarmed out of possession by Alessandro Murgia. 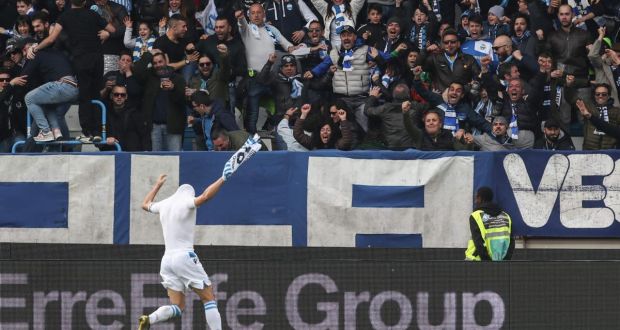 Juventus would have become Serie A champions for an eighth successive year, had they avoided defeat against SPAL – but will have to wait until next weekend’s home clash against Fiorentina for an opportunity to secure the Scudetto once more.

Mavididi replaced goalscorer Kean with just over 20 minutes to play and the 20-year-old forward will be hoping it’s the first of many appearances for Juventus’ senior side. He has been on the fringes of the first-team in recent weeks, an unused substitute against both Udinese and Cagliari recently, but predominantly impressed with the club’s under-23 side in Serie C this term.

It’s been a memorable season for the Derby-born striker, who left Arsenal for Juventus in a £2m move last summer. All things considered, it’s refreshing to see him finally earn his debut at one of the world’s best clubs and he’ll look to emulate Kean’s ongoing success in-front of goal when more first-team chances are granted.

It’s easy to forget that Kean himself turned 19 at the end of February and Mavididi turns 21 next month, so Juventus’ attacking options look promising for many years to come.

That’s welcome news for the Biaconieri, especially as Cristiano Ronaldo was rested for this fixture after his Champions League exertions in midweek. Kean’s excellent goalscoring form means he could start against Eredivisie giants Ajax.

Elsewhere in the league today, Roma and AC Milan earned narrow 1-0 wins over Udinese and Lazio respectively. Tomorrow’s fixtures are as follows (2pm unless stated):