Quick-fire goals in an action-packed second-half courtesy of Sadio Mane and Mohamed Salah sealed an important victory for Liverpool, who returned top of the Premier League after a 2-0 win over Chelsea at Anfield.

This was Jurgen Klopp’s 200th game as Liverpool manager in England’s top-flight and given the game’s magnitude, promised to be a tantalising clash against an unpredictable Chelsea side.

Season-defining fixture, it promised to be. After all, the title-chasing Reds couldn’t afford to lose or drop points after Manchester City’s 3-1 win over Crystal Palace earlier in the afternoon.

So naturally, they started the brighter of the two teams. Jordan Henderson and Salah both going close in the early exchanges, buoyed by a raucous crowd on Merseyside. The latter’s sweetly-struck volley was comfortably held by an alert Kepa Arrizabalaga, but it was quietly a sign of things to come.

Maurizio Sarri surprisingly opted against both Gonzalo Higuain and Olivier Giroud, with talisman Eden Hazard playing in the visitors’ false nine role. Despite buzzing around energetically, he found himself isolated by Naby Keita and a tough-tackling Fabinho.

The Blues’ only real chance of the first-half came after an innocuous counter-attacking move. David Luiz set up Willian, who darted forward and evaded the attention of both Joel Matip and Virgil van Dijk before firing wide of Alisson’s far post. Ironic jeers followed, but it was a necessary warning sign for Liverpool to heed.

Antonio Rudiger (knee) limped off after suffering a reoccurrence of a knock he’d earlier ignored, with Andreas Christensen coming on in his place.

Luiz was arguably fortunate not to have given away a penalty, after his lazily outstretched leg caught Salah as he slalomed his way towards the byline. Emerson was struggling against his former teammate, who relished their one-on-one battles and deftly skipped past him with ease.

Mane curled an effort wide after Ruben Loftus-Cheek was ruthlessly dispossessed in midfield and suddenly, Liverpool were in the ascendancy once more just before the half-time whistle.

Chelsea were clearly lacking a target man to distract or at least frustrate the Matip-van Dijk pairing, but things were about to get worse. Salah combined with Firmino before outmuscling Emerson to the turf, teeing up Jordan Henderson – whose clever chipped pass towards the back post was headed home by Mane.

He couldn’t miss from such close-range and it marked his 18th league strike of the campaign, as his goal tally continues to increase in his most productive season in-front of goal.

Just two minutes later, Liverpool were wheeling away to celebrate another strike. This time it was a thing of beauty: Salah rifling an effort into the top corner from 20 yards, after sidestepping Emerson and striking with Jorginho too slow to react.

After eight games without a goal, he has now netted twice in three games. This was the exclamation mark he has longed for and in a match of high importance, the timing was perfect. 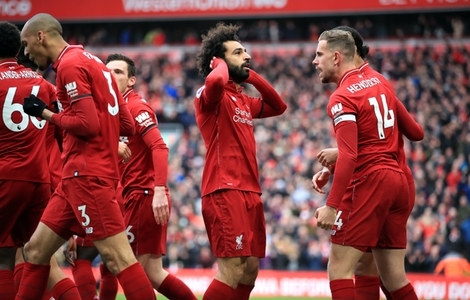 Hazard misses two great chances, Chelsea down and out

The same couldn’t be said up the other end, as Chelsea still created promising chances after Sarri’s substitution. Higuain replaced an ineffective Callum Hudson-Odoi, Hazard shifted out to his preferred role on the wing and should have provided the quick-fire double to equalise for his team.

Instead though, he hit the post from close-range with his first effort before failing to strike cleanly and giving Alisson an easy save to make for the second minutes later. Chelsea’s eight-game unbeaten run at Anfield was coming to an end and if their talisman couldn’t take clear-cut chances like those, they didn’t stand a chance. 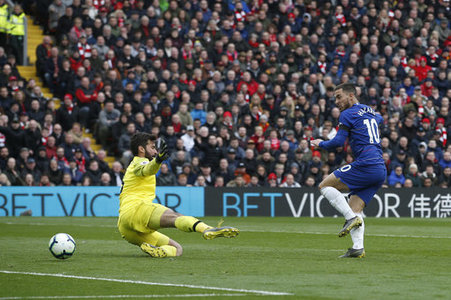 Hazard watches on as his close-range effort hits the post against Liverpool, who were again exposed on the counter-attack but not made to pay for it. (Picture source: PA Images)

It didn’t stop them trying. Trent Alexander-Arnold made a number of important interventions to thwart the combination play between Hazard and Higuain, while Ross Barkley was greeted with boos after replacing Loftus-Cheek as time wore on.

Liverpool, despite a few scares, held firm for their 18th clean sheet of the campaign in a memorable victory – one where they weren’t exactly at their scintillating best but a 10-minute spell aside, didn’t need to be.