During an edgy, tightly-contested affair, both sides began tentatively – knowing a place in the Champions League semis awaited the victor.

Considering their frenetic affair last week, neutrals would have been quietly hoping for more of the same in Turin. Despite the vast amount of quality on display, there was only ever one man capable of sparking the game into life: Cristiano Ronaldo.

So on his 699th club appearance, the Portuguese duly delivered. He benefited after a defensive communication mix-up from Miralem Pjanic’s corner saw him afforded time and space to pick his spot from close-range. Andre Onana stood no chance, as the ball flew into the bottom corner.

28 minutes played, the referee’s VAR check complete and Juventus found themselves a lead to protect. It lasted all of six minutes. You could empathise with Ajax, had their heads dropped. But they defiantly refused to let one mistake define their tie and instead, returned with a response which stunned their hosts into silence.

Daley Sinkgraven, a substitute making his competition debut after Noussair Mazraoui’s knee injury forced him off after ten minutes, whipped a hopeful cross towards the box.

Federico Bernardeschi’s block saw the ball spin out towards a determined Hakim Ziyech, who fired goalwards on the half-volley. His shot-turned-pass fell perfectly for van de Beek – played onside by an unsuspecting Mattia de Sciglio – who calmly slotted into the corner beyond a helpless Wojciech Szczesny. 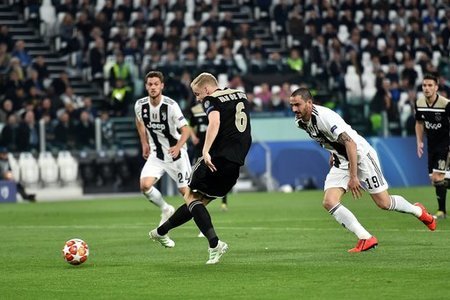 As the half-time whistle sounded, Erik ten Hag’s side were playing confidently and suddenly the tide shifted once more. Juve, who were heavy favourites – especially at home – had to deal with unfamiliar territory against a youthful Ajax side with nothing to lose.

Paulo Dybala was forced off with a muscle injury at the interval, as in-form forward Moise Kean replaced him.

Meanwhile at the other end, Ajax were finding more joy in the final third. Szczesny, making his 50th Champions League appearance here, was forced into an excellent stop to deny Dusan Tadic.

His outstretched hand proved pivotal in keeping the scores finely poised, having already committed his position to the right but remaining big to anticipate the Serbian’s potential change of direction.

Ajax’s quick passing combinations were splitting Juventus’ backline at will as the hosts found themselves chasing shadows. Another goal seemed increasingly ominous. They wanted it more and each Juve loose pass was met with a collective energy boost as they galloped forward in numbers. van de Beek’s curling effort from distance was swerving towards the top corner and again Szczesny came to his side’s rescue, tipping over the crossbar.

One thing was clear: Ajax were firmly in the driving seat. Juventus’ counter-attacking threat was briefly on display, as Ronaldo combined with substitute Kean before the teenager, being hounded by de Ligt to his left, shot wide. Pjanic made a goal-saving sliding clearance after David Neres and Tadic combined to tee up Ziyech, waiting patiently at the far post.

Massimiliano Allegri’s second substitution of the evening spoke volumes. Replacing Mattia de Sciglio, who had done well, for Joao Cancelo, highlighted just how difficult a task it was to constantly track Ajax’s wingers in transition.

A minute later, Tadic produced another defence-splitting pass. This time though, the visitors’ decision-making was poor and Ziyech chose the wrong option, opting for a pass too many as the danger was averted. If being overly critical, you might’ve wondered whether they would live to rue their missed chances. Ultimately though, their pressure showed and they took the lead midway through the second-half in emphatic style too.

Lasse Schone’s inswinging corner was inviting and de Ligt anticipated the dangerous cross. Leaping above both Alex Sandro and Daniele Rugani to head goalwards, he angled his strike perfectly and Szczesny found himself helpless again. Wheeling away to celebrate with the 2,000-strong travelling support, Juventus now needed two goals (away goal rule) to progress and suddenly Ajax’s semi-final dream was very real indeed.

But for their wasteful decision-making in the final third, they might have put the game beyond doubt long before de Ligt’s strike. Instead though, buoyed on by their circumstances, it saw them hungry for more goals.

Neres came close, Ziyech had a brilliant strike correctly ruled out through offside and with time ticking on, Juventus’ chances of a heroic comeback were increasingly slim.

Kean headed over from a Bernadeschi cross, while substitute Rodrigo Bentancur had an attempted pass blocked by the outstretched hand of Daley Blind. Despite a brief VAR check and the hosts’ vehement protests, no spot-kick was given and it rather typified their night.

We were expecting a better, more accomplished and experienced display from Juventus given their pedigree and quality in abundance. Instead, they were blown away by a fearless Ajax side who played them off their own pitch and were deserved winners over the two legs.

Tottenham lead 1-0 after last week’s first leg tie, but travel to Manchester with another tricky ask on their hands if they are to make history themselves. After watching another Ajax display like this, every remaining team in the competition has been put on notice.