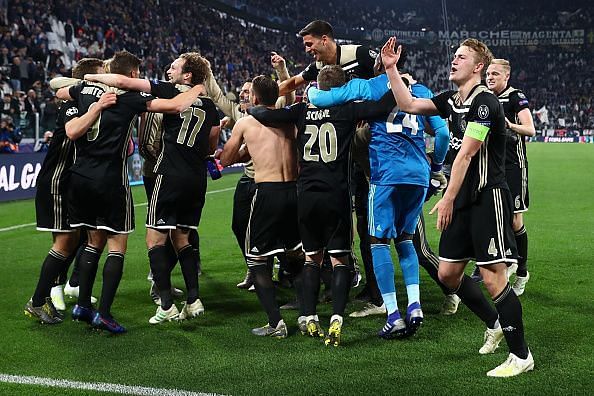 Ajax stunned the world again, this time beating Juventus 2-1 (3-2 agg) to earn their Champions League semi-final place. They’ll play either Manchester City or Tottenham for a place in next month’s final, but what are five talking points from their memorable victory in Turin?

Goals from Donny van de Beek and teenage captain Matthjis de Ligt saw Ajax stun Serie A champions Juventus with a 2-1 win to reach the Champions League semi-finals for the first time in 22 years after an unforgettable night of football in Turin.

Erik ten Hag’s men have broken records aplenty and won new admirers after another impressive all-round display, which marks the first time in nine successive years that Cristiano Ronaldo will miss out on the competition’s semi-final stage altogether, whilst also being the first time Ajax have beaten Juve since 1974.

It was Ronaldo himself who broke the deadlock with a close-range header just before the half-hour mark. However, the bullish visitors responded in style to equalise six minutes later, after Hakim Ziyech’s goalbound effort fell perfectly for van de Beek – slotting into the bottom corner beyond Wojciech Szczesny.

Juventus had Szczesny to thank for keeping the scores level, as the former Arsenal man was forced into making a string of important saves to keep Ajax’s fearsome attack at bay in a match where they carved open opportunities but failed to capitalise on most of them, predominantly by overplaying or picking the wrong option at the final moment.

But their pressure told and it was none other than 19-year-old de Ligt who provided the hammer blow, leaping above two defenders to head home midway through the second-half. For all their quality, experience and nous in high-pressure situations, Juventus wilted under the pressure and ultimately failed to recover.

Ajax are set to face either Manchester City or Tottenham for a place in next month’s showpiece final and with all of that in mind, here’s a look at five talking points from a memorable night in Turin: 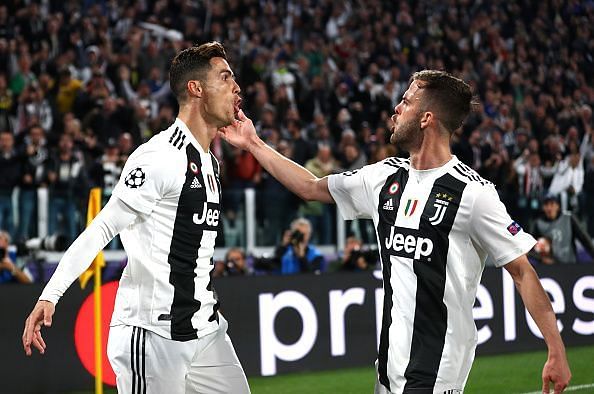 Ronaldo celebrating his opener with Miralem Pjanic, whose cross was duly converted by the Portuguese

Considering the frenetic nature of their 1-1 draw last Wednesday, neutrals would have been hoping for more of the same on this occasion. After a tense opening here, there was only ever really one man poised to spark the game into life – Cristiano Ronaldo.

So naturally on his 699th club appearance, the Portuguese duly delivered. It was by no means the best goal he’s netted this season, nor did it mirror any from the previous round during their impressive comeback over Atletico Madrid, but the 34-year-old broke the deadlock from close-range and made the visitors pay for their lax marking to devastating effect.

A defensive communication mix-up between de Ligt and Joel Veltman saw him left unmarked and from Miralem Pjanic’s corner, he had both time and space to dart towards the six-yard box and head goalwards, picking his spot beyond a helpless Andre Onana as the ball flew into the bottom corner.

It should have been the start of a memorable evening for Juve, but instead proved the catalyst for Ajax’s stunning response. Ronaldo, the man they happily spent £100m on last summer to win this competition, found himself marked tighter and frustrated more regularly as the match wore on after van de Beek’s swift equaliser.

Dispossessed twice, fouled on four occasions and regularly misplacing passes, Ajax’s backline did well to ruffle his feathers after conceding such a preventable finish. Rather than to continue playing with the fearsome attitude we know he can, Ronaldo was often arguing with officials and occupying areas in the final third that were easier to defend against in numbers.

It’s why de Ligt in particular sort to thwart him whenever possible, particularly as his movement was limited to the far/near post and preying on the last defender’s off-the-ball position. As a result, he’ll miss a great chance to retain the Champions League, a competition that he’s made his own in recent seasons and previously won three consecutive years with Real. 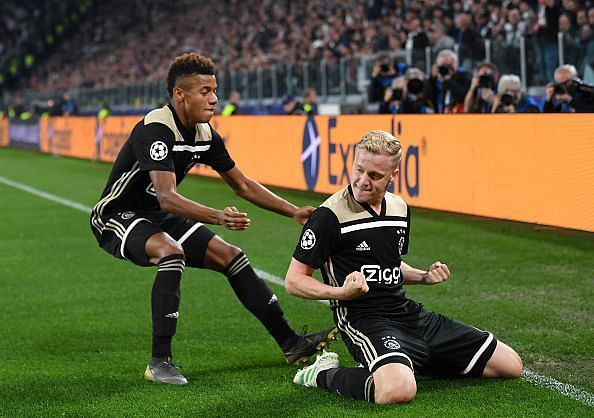 After running the show in the first leg, it’s fair to say a lot of eyes were fixated on Frenkie de Jong and his performance on this occasion – especially considering the 21-year-old will be joining Barcelona this summer after all.

Having limped off early with a hamstring injury during Saturday’s 6-2 win over Excelsior, it was surprising to see the Dutchman start because he didn’t appear 100% fit, but then again no player would want to miss a game of such magnitude. The commentators highlighted his perceived reluctance to drive forward and instead, he often adopted a more conservative approach in possession, perhaps wary of Juventus’ counter-attacking capabilities.

Instead, it allowed Donny van de Beek an opportunity to shine and he did precisely that – balancing attack with defence, he contributed well on both sides of the ball, displayed maturity beyond his years and crucially, composure when it mattered most. He made a difficult finish look easy, slotting beyond Szczesny for Ajax’s equaliser. With the same approach, he manoeuvred himself out of tricky situations when vying for possession.

His match stats speak for themselves: seven ball recoveries, three tackles, two shots, one key pass and goal. As for de Jong, he was conservative and more quiet than last week’s display but nonetheless effective.

Growing in confidence as the match wore on, he became more involved in passing combinations despite adopting a cautious approach in possession. Seven ball recoveries, two tackles and aerial duels won, one interception and key pass. Not bad for someone who was quiet, is it? 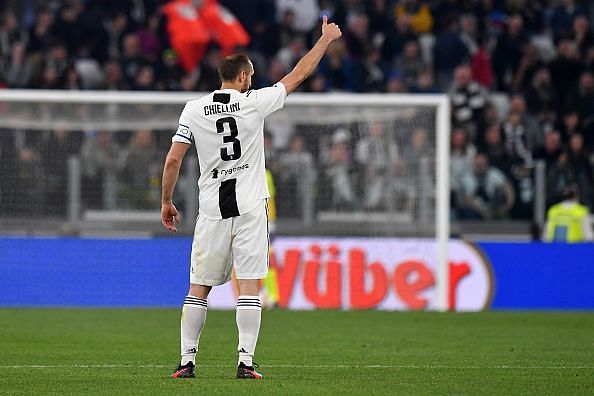 Despite their quality, Juventus were clearly missing their leader at the back – Giorgio Chiellini – in a must-win game on this occasion.

The vastly experienced 34-year-old was sidelined before the first leg through a calf problem and despite suggestions claiming he could make a surprise recovery in time for the second leg, they proved just speculation after the Italian failed to train with his teammates on Monday.

Daniele Rugani and Emre Can both started, while Rodrigo Bentancur made an appearance off the substitutes’ bench, but it’s clear to see that Juve are not the same team without Chiellini’s calming presence at the back. That goes for the league and cup competitions, but it doesn’t make for good reading when you’re losing at home in a crunch Champions League clash without Chiellini, who is 34 and not getting any younger.

Rugani is good but not yet world-class, while Leonardo Bonucci has always been suspect defensively despite possessing an excellent passing range that gets him out of trouble.

Rugani didn’t complete a tackle throughout the 90 minutes, committed two fouls and made four clearances, two interceptions and a block. As for Bonucci, he made two tackles, two interceptions, one block and was penalised once. Between the pair of them, they found it tough to cope against a relentless Ajax side who stretched their backline and often forced them into indecision – whether to commit to fouls or attempting to delay shot attempts in the meantime, waiting for support. 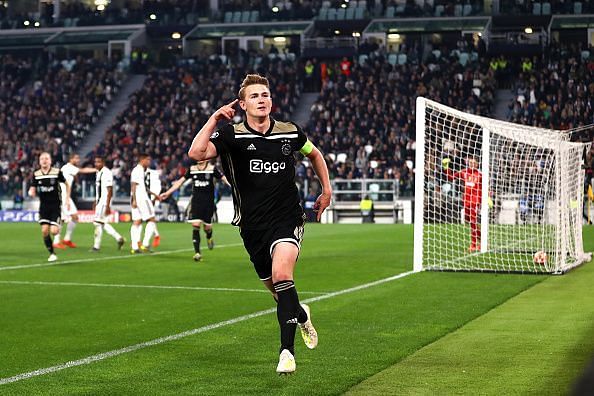 de Ligt delivered a captain’s display – excelling as he usually does against Ronaldo and co, while scoring

Lasse Schone’s inviting corner delivery was too enticing for de Ligt to not attack. Leaping above both Alex Sandro and the aforementioned Rugani to head goalwards, he angled his strike to perfection before wheeling away to celebrate. The header was well-taken, but it also seemed inevitable they’d score again given the wave of Ajax chances created in an action-packed second-half.

What was more telling though – other than his excellent winner – was an overall performance fit for the captain he is. It’s easy to forget that he’s still 19-years-old. Matthjis proved once again that age is just a number, not least when you’re tasked with leading by example against a dangerous Juventus side who had already broken the deadlock through Ronaldo.

Unfazed by the Portuguese, he relished the challenge and often came out on top – doing his utmost to frustrate, dispossess and make things increasingly difficult whenever Juve found themselves baring down on Onana’s goal.

Case in point being his sliding challenge to force substitute Moise Kean wide of the mark after Ronaldo’s flick-on. Another instance? A crucial headed touch which put Ronaldo off when shaping to shoot at the near post and in doing so, enough to avoid conceding again.

Five aerial duels won, a game-high 10 clearances, one block, interception and tackle completed – his individual display was great to watch and suddenly quality defending is back in fashion again.

Keen not to rest on his laurels, you could see him visibly communicating with teammates throughout the game, almost as if he was walking them through certain moments and giving them advice on how they could sustain their defensive efforts as Juve soon ran out of ideas. It was marvellous to watch, from someone whose transfer value continues to skyrocket this season. Consider this: Ajax started their Champions League campaign back in late July against Austrian side Sturm Graz, had to play two qualifying rounds and a play-off just to get into a group stage with Bundesliga champions Bayern Munich and Portuguese giants Benfica.

They finished second to Bayern, were unbeaten and have since then knocked out both the competition’s reigning champions and now the team who boast Real’s leading talisman over the past decade in their ranks.

That is remarkable, especially when you factor in the fact that they’ve got a refreshing mix of youthful exuberance and experience in their squad – Daley Blind, Tadic, Schone and Huntelaar all wise heads.

By beating Juve here, they have become the first team in history to reach the semi-finals having played three qualification rounds on route, while manager ten Hag revealed his belief that the aforementioned sides were a “little scared” of them, why wouldn’t they be?

They play with relentless speed on the counter-attack, have many technically-gifted players who can combine well in transition and are tough to contain for long.

With refined decision-making in the final third, there’s no reason why they cannot go all the way this year – not least against one of City or Tottenham in the semi-finals. The fact that all of their key players are destined for big-money transfers works in their favour too, as they ultimately have nothing to lose. de Jong, de Ligt, Neres et al – it just fuels their fire to succeed.