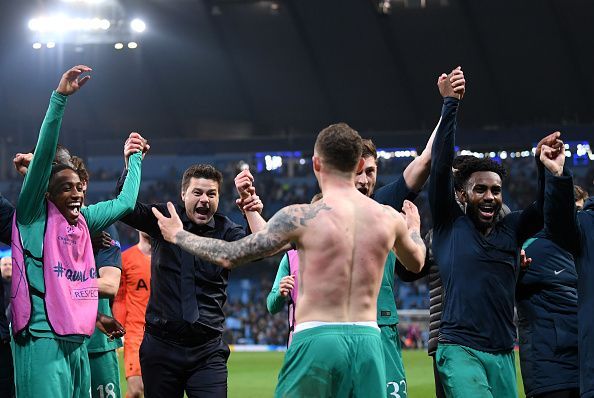 Manchester City’s quadruple hopes ended in dramatic fashion on Wednesday night, as Raheem Sterling’s stoppage-time winner was correctly ruled as offside after VAR review – meaning Tottenham have progressed into the Champions League semi-finals on away goals rule despite a 4-3 defeat at the Ethiad.

In a breathtaking spectacle during their quarter-final second leg, the pair broke a competition record for the fastest five goals ever scored in one match after 22 minutes with City 3-2 up on the evening.

Despite their narrow defeat on the night, Spurs’ 1-0 home win from last week’s first leg proved pivotal as they earned their first Champions League semi-final since 1961/62, where they’ll play against Juventus’ conquerors Ajax. With all of that in mind, let’s take an in-depth look at five player performances – some of whom excelled, while others struggled during a match of the season contender: 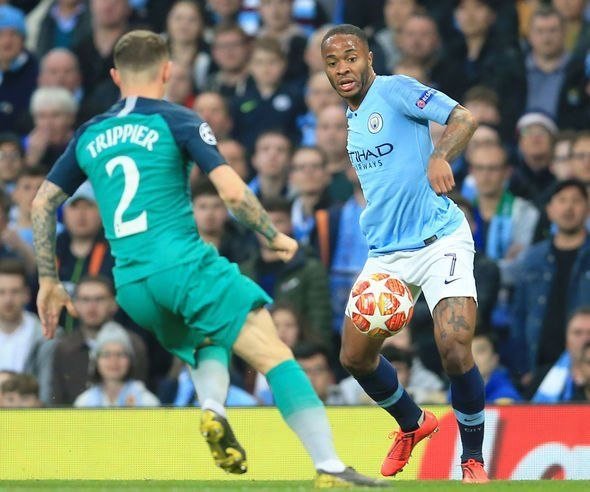 Trippier was given the run around by a rampant Sterling throughout

I can’t remember the last player to have received the mountain of abuse and vitriol that came Kieran Trippier’s way on Wednesday, in a game where he wasn’t even the worst performer.

Sterling ran rings around him and he was almost always second best against Raheem. He should have done more to stop his compatriot from scoring twice, agreed. The first was a brilliant finish after he evaded his attention and cut inside but the second was more sloppy positioning and man-marking than anything, failing to stick tight.

Even still, the Manchester City youth product had a job to do and among the criticism for his defensive display, rolled up his sleeves and redeemed himself as the match wore on. His form has been inconsistent throughout the campaign and he himself has sought out to improve after a memorable World Cup campaign with England last summer, but this notion that he’s suddenly become poor overnight is tedious in itself.

He has never been the best at defending wingers in one-on-one situations, so how can you expect him to excel against one of the world’s best in Sterling? Ultimately though, he struggled defensively but redeemed himself. Luckily the damage wasn’t terminal courtesy of the away goal rule – he created the assist with a teasing corner for substitute Llorente to bundle home in a relentless second-half. 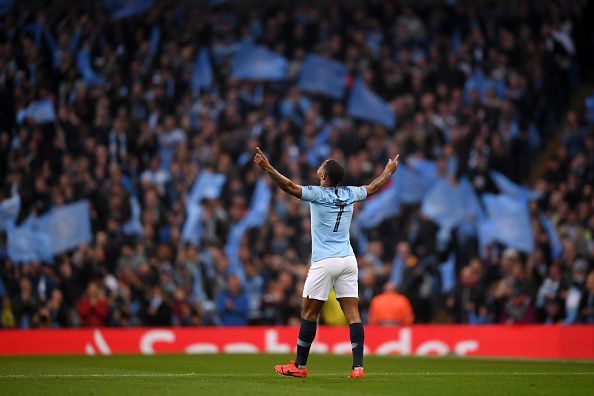 If only… On another day, Sterling would have dominated the back pages, buoyed by an inspiring hat-trick to help pull his side into the Champions League semi-finals. Instead, he had a dramatic winner chalked off after VAR review and the aftermath will live long in the memory after such an unpredictable match.

A lot has been said about his improved finish capabilities in recent months and after netting a brace away at Crystal Palace on Sunday, he did the same against Tottenham here. His first broke the deadlock in emphatic style after just four minutes, leaving Kieran Trippier for dead before cutting inside on his right foot and firing low into Hugo Lloris’ bottom corner.

Despite all the criticism levelled at Spurs’ first-choice keeper this term, he could do nothing to stop that strike – which goes to show just how Raheem is developing that facet of his repertoire, with confidence and improved decision-making proving he’s taken his game to the next level.

As for the second, well, it was a lot to do with intelligent movement and attack positioning – evading Trippier’s attention to slot home from close-range at the back post after de Bruyne’s devilish ball was fizzed across goal. Sterling was a livewire throughout, breaching compatriot Trippier on multiple occasions and had his tie-winning goal ruled out in what would have capped a brilliant performance from City’s main man this season. 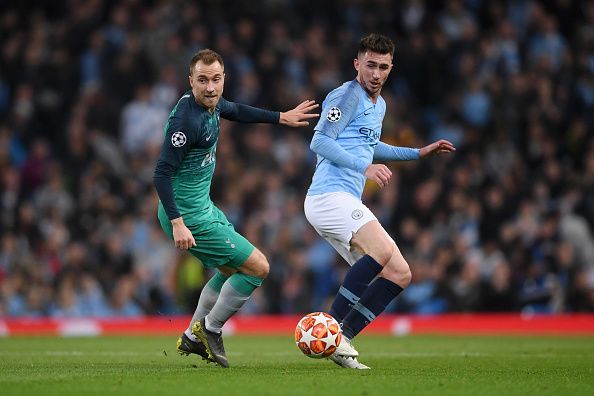 Given his excellent season to date, the timing of such a disappointing performance couldn’t have been any worse. Following last week’s 1-0 defeat, City needed a purposeful start on both ends of the pitch but defensively, were exposed. The Frenchman – normally composed and assured – was nervy and struggled to cope, playing a pivotal role in both Tottenham’s early goals before the 10th minute had elapsed.

You could see how the nerves were affecting his game and although he markedly improved afterward, the damage was already done. It allowed the visitors hope that, regardless of how many goals they would concede, City’s backline was still there for the taking.

For the first goal, his misplaced pass gifted Heung-Min Son a great opportunity to break the deadlock. As for the South Korean’s second, this time a heavy first touch presented the ball to Lucas Moura, who counter-attacked at speed and made the hosts pay to devastating effect.

Should have done better to outmuscle Llorente in the build-up to Tottenham’s dubious third, whether it was a handball or not. An all-around forgettable evening’s work for the 24-year-old. 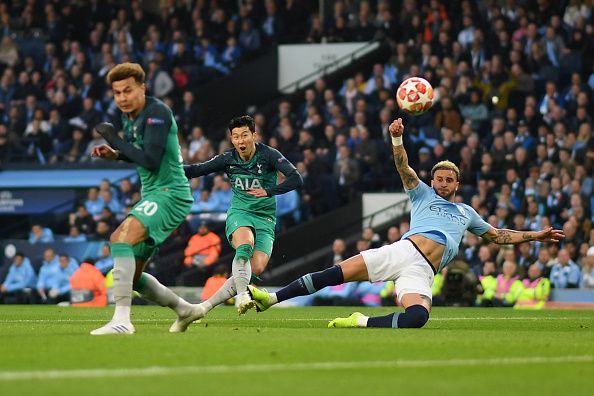 Son, just like Sterling, netted a first-half brace – including this fantastic strike to gift Spurs the lead again

A lot has been said about Harry Kane’s absence and how Tottenham would deal with their talisman being sidelined. Yet again though, Son proved critics and the naysayers wrong – he is more than capable of being up to the task.

Popped up with two quick-fire goals to stun a nervy City backline, the second of which was a strike of the highest quality beyond a helpless Ederson. His first was just as ruthless, albeit not the cleanest strike, after Laporte’s mistake in possession gifted the visitors a counter-attacking opportunity.

He deceived the Brazilian to slot home from close-range, despite Ederson’s best efforts – but there was no stopping his second minutes later. It flew into the top corner from distance and his strike zapped the life out of the stadium, even if just for a ten-minute spell.

His finishing has, just like Sterling, been progressively improving in recent seasons and despite fading in influence during City’s dominant second-half display, he crucially did enough to force them into an attack-heavy mindset – one they were not expecting after Sterling’s opener. Worked hard out of possession as usual and carried the ball forward well during a less busy second-half in the final third for Tottenham. 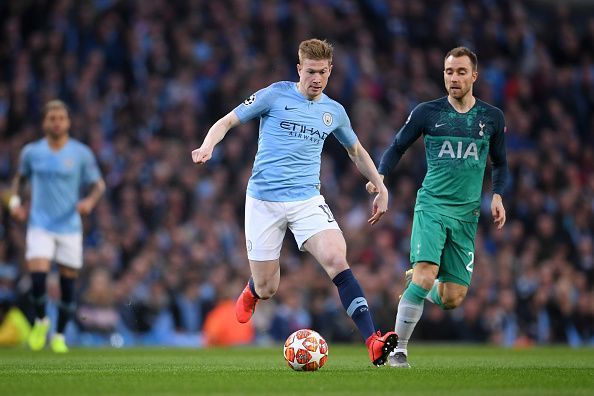 In a game of such magnitude, de Bruyne excelled – becoming the first player in over a decade to record three assists in a UCL QF

After an excellent display like this, it makes his very brief cameo in last week’s first leg all the more baffling. Kevin de Bruyne, City’s best player last season, has been struggling with troublesome injuries throughout this term – that much we all know.

However, the quality and creative presence that he provides are just too integral to leave out, even if he’s not necessarily at 100% fitness. It was his quick-thinking nature, inventive approach and spatial awareness which saw him become the first player since Ryan Giggs (vs Roma in 2007) to register three assists in a Champions League quarter-final. During a match of such magnitude with high stakes and pressure on City’s shoulders, de Bruyne didn’t flinch. He flourished.

A lot can be said for Trippier’s poor positioning and failure to stick tighter to Sterling, but de Bruyne’s inch-perfect pass, fizzed in low across the box, created Raheem’s second goal. It’s become a sort of trademark for the Belgian, whose creative capabilities are only now really being highlighted – mainly because of City’s creative struggles without him. His first was from a surging run through midfield, where he found Sterling to his left and soon enough wheeled away to celebrate.

Continually marauding forward and eager to orchestrate attacks, his third typified another highlight reel performance: gliding through midfield before teeing up Aguero with a great pass, before the Argentine slammed home with aplomb at Lloris’ near post. Superb display, he certainly didn’t deserve to bow out of the competition.