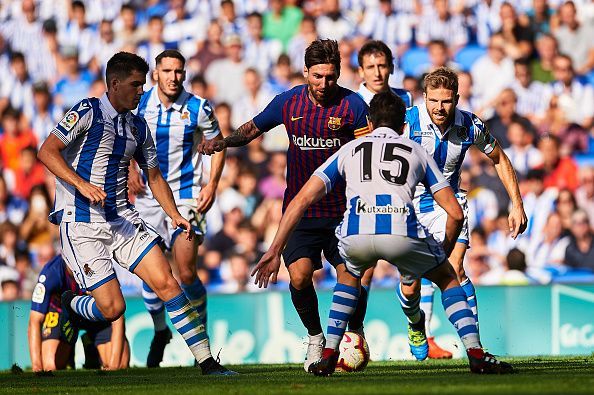 After their Champions League quarter-final win over Manchester United in midweek, can Barcelona continue their winning ways in La Liga against an ambitious Real Sociedad side?

Barcelona return to league action today aiming to all but secure their second successive La Ligatitle against a determined Real Sociedad side, who harbour hopes of European qualification this term.

Their commanding 3-0 Champions League quarter-final win over Manchester United in midweek means they’ll face last year’s finalists Liverpool for a place in the final next month, though boss Ernesto Valverde is expected to field a strong side here with fixtures coming thick-and-fast over the next month for the league leaders.

With six matches and a nine-point gap separating themselves and closest rivals Atletico Madrid, it’s increasingly unlikely that Barca will not retain their Spanish crown – although Sociedad are a tricky prospect and often give them a stern test.

As previously mentioned, Barca won in midweek and will be coming into this fixture on a high, having earned a UCL semi-final berth for the first time since 2014/15, when they last won the competition.

You’d be wise to focus upon Lionel Messi and Philippe Coutinho after their midweek displays. After his brace, Messi has now netted 15 goals in his last 11 club appearances and Coutinho, heavily linked with the exit door in recent months, continues to quietly progress. 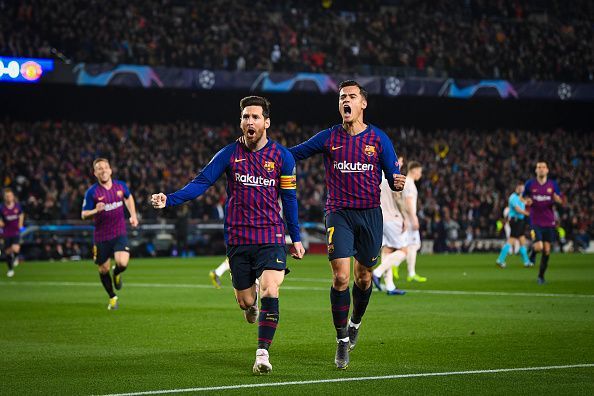 Messi and Coutinho wheel away, celebrating one of the goals during a demolition job vs Manchester United

Sociedad’s last game was on April 14, a 1-1 draw against an inconsistent Eibar side – so with a full week’s rest, they will be hoping to build and secure another result. Sociedad will be relying on the performances of former Newcastle midfielder Mikel Merino and talismanic winger Mikel Oyarzabal if they are to get anything from the Camp Nou.

Oyarzabal, who turns 22 tomorrow, has captained the side recently and been leading by example in attack this term. With 12 goals and four assists in 30 league starts, the Spain under-21 forward will need to be at his best against a defiant Barca backline.

Given their excellent form, squad depth and sheer quality, I’d be naive to bet against anything other than a comfortable Barcelona win on this occasion.

Sociedad should prove tough opposition but just like others before them, it shouldn’t be enough to derail the hosts’ title pursuit. The only way I see them winning this is if Valverde opts for a less than full strength side, as he did with a whopping ten changes at Huesca last Saturday.