Arsenal secured their Europa League semi-final place after a 1-0 (3-0 aggregate) victory over Serie A giants Napoli away from home at the San Paolo, but which players impressed while others struggled in Italy?

Alexandre Lacazette’s excellent free-kick strike helped the Gunners secure their passage into this season’s Europa League semi-finals against a Napoli side who flattered to deceive at the San Paolo and have crashed out of the competition in underwhelming fashion.

Despite creating many promising opportunities, Napoli struggled for cohesion and consistency in the final third when it mattered most, squandering chances and ending the two-legged tie without scoring a solitary strike.

Arkadiusz Milik scored midway through the first-half, but his goal was correctly chalked off as the Poland international strayed offside. He missed another chance minutes later, while Jose Callejon and Lorenzo Insigne disappointed too. Aaron Ramsey limped off before the break with another muscle injury, this time straining his hamstring – minutes prior to Lacazette’s fantastic finish from distance.

The Gunners have now reached the same stage in two consecutive seasons and will face La Liga side Valencia for a place in next month’s final.

It was somewhat surprising the Belgian didn’t start for Carlo Ancelotti’s men, but upon his arrival to start the second-half, you could understand the Italian’s decision. Replacing Nikola Maksimovic given the hosts’ significant deficit to overturn, he was expected to provide pace, purpose and creativity to help steer his teammates towards an unlikely comeback.

Instead, he was frustrating to watch and lacked the cutting edge we know he’s capable of producing – struggling against an Arsenal side who defended well in stages but are vulnerable even at the best of times.

Dispossessed on three occasions, he had 80% pass accuracy and created one key pass in 45 minutes. Those statistics are simply not good enough for a player of his pedigree, especially after the career-best season he enjoyed in 2017/18. This term, he has failed to sustain his high levels and this type of performance rather typifies his struggles.

How could he not be included in this list? Lacazette’s excellent finish proved the winner in a game that shouldn’t have finished 1-0, in truth. But it proved the perfect away display by Arsenal against tough opposition – with the Frenchman again outshining strike partner Pierre-Emerick Aubameyang, who is often preferred to him when leading the line in the Premier League.

Despite a sluggish start, his link-up play was solid as ever, he looked to create chances and cause havoc for Napoli’s backline, hovering in-and-around the final third. Allan’s forceful challenge on him presented an opportunity to conjure up some magic from distance and he did precisely that. Alex Meret in the Napoli goal took one step to his right and was left rooted to the spot, as Lacazette struck perfectly up, over the wall and down into the bottom corner with aplomb.

He could’ve had an assist if for better timing and anticipation on Aubameyang’s part, as a teasing pass caught Kalidou Koulibaly out but the Gabonese forward failed to latch onto the pass as it trickled out of play.

Involved in most of Arsenal’s promising attacks, even without needing as many touches (35 total) on the ball, just shows how efficient he can be in games like these. Won one aerial duel and two tackles too.

Napoli collectively were poor and Insigne’s performance, more than most, really sums up how Ancelotti’s men have performed over the two legs. Despite showing flashes of promise and threatening with chances, they’ve been equally wasteful and decision-making laboured too.

He skipped past Sokratis’ advances to tee up Milik with a great through ball. Despite that sprinkling of quality, Insigne’s minuscule moment of hesitation and the forward’s overeagerness to latch onto the pass itself combined to mean the goal – a well-taken chip over Petr Cech – was correctly ruled out as offside.

Having shown great pace and agility to skip beyond Ainsley Maitland-Niles near the byline, he ventured into the box before releasing a teasing pass for an onrushing Fabian Ruiz to latch onto. The eventual shot was struck wildly and ballooned over the crossbar, but Insigne’s decision-making in another key moment was questionable.

Rather than tee up Mertens on the run to his left, he went backwards and consequently reduced their chances of scoring by a considerable amount. Mertens’ run was not tracked well by Lucas Torreira and although Koscielny was alert, the Belgian would have had a better chance to score from close-range.

But perhaps the moment which most typifies his display was just before the hour mark. Ruiz’s excellent crossfield pass fell perfectly into the winger’s path with Maitland-Niles and Sokratis hot on his heels. Mertens in support to his right, Cech and a shot on-goal directly in-front of him.

Instead of cutting back inside to tee up Mertens, or shooting with venom so the Belgian could gratefully attack the ball in hopes of a rebound, he essentially passed it to Cech. A minute later he was substituted and reacted angrily, but how can you explain that? Not good enough from a player of his creative capabilities, not least with the opportunities presented his way. 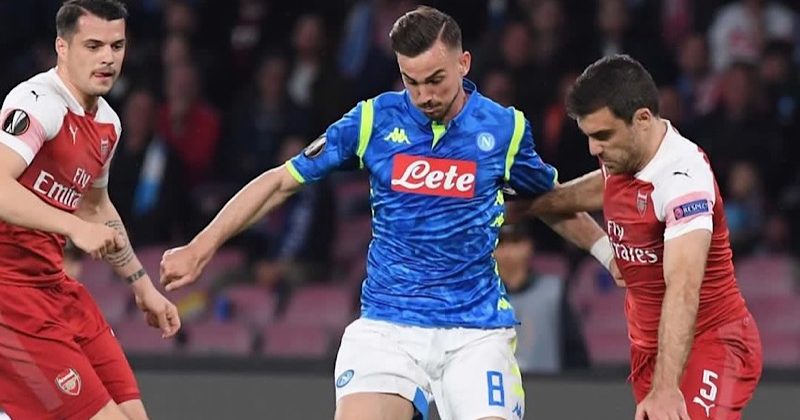 Napoli were knocked out and rather surprisingly they departed the Europa League in feeble fashion on Thursday night – but there were a few positives. Vlad Chiriches defended well, while the midfield combo of Piotr Zielinski and Fabian Ruiz impressed.

Ruiz in particular, stepped up in a game where Napoli needed to start quickly and threaten Arsenal – which they did, ultimately though without reward.

Aside from his shot that flew wildly over the bar, the Spaniard acquitted himself well and against an ever-improving Gunners midfield, was unfazed in possession. Regularly looking to get touches on the ball and importantly, push teammates forward in support, the 23-year-old was composed and comfortable enough to break the lines with perfectly-weighted passes.

If for more ruthlessness in the final third, he would’ve ended up on the winning side. A game-high seven key passes, three completed dribbles, two tackles and one clearance – a busy but nonetheless excellent display from a midfielder improving all the time after his £27m move from Real Betis last summer.

Koscielny embraces Lacazette at full-time, with a hard-fought win and clean sheet in the bank

I thought he was supposed to be finished? 33-years-old, a year after rupturing his Achilles, Laurent Koscielny continues to silence his doubters in the best possible way – leading Arsenal by example at the back and being key to their defensive improvements in recent months.

The club captain was, as usual, quietly impressive and needed to be against a Napoli side who possess a vast array of attacking quality, even if their decision-making leaves a lot to be desired.

Despite a poor 53.3% pass accuracy on the evening, Koscielny made his presence felt even without having as many touches (28) or opportunities to distribute out from the back as he normally does. That is mainly due to Napoli’s dominance in possession, 70% total over the 90 minutes, although he remained composed at the back and concentrated whenever they probed in-and-around the area, well equipped to deal with dangerous situations when they arrived.

A game-high eight clearances reiterates that fact, as he was alert and needed to be at times when Sokratis or Monreal would get caught ball-watching or out of position. Always there, he made one tackle, interception and block with countless interventions frustrating the hosts in their pursuit of an all-important goal to boost their comeback hopes. It ultimately didn’t come, something that Koscielny in particular made sure of.