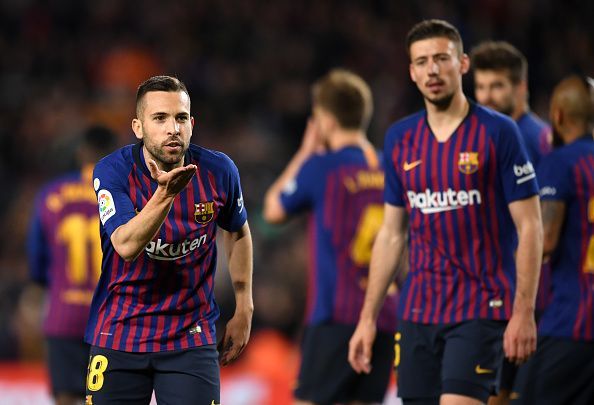 Barcelona edged ever closer towards their second successive La Liga title with a hard-fought win over European hopefuls Real Sociedad, but what were five thoughts from their 2-1 victory?

Barcelona edged a step closer to sealing their second successive La Liga title, and seventh domestic triumph since the 2008/09 campaign, after a hard-fought 2-1 win against Real Sociedad on Saturday evening.

With five matches remaining, Ernesto Valverde‘s side only need six more points to mathematically ensure that closest rivals Atletico Madrid can no longer catch them, after Atleti’s 1-0 away win over Eibar in one of the day’s earlier fixtures. Without further ado though, let’s take an extended look at five talking points from Barca’s latest win:

#5 Sociedad with work to do to fulfil their European ambitions 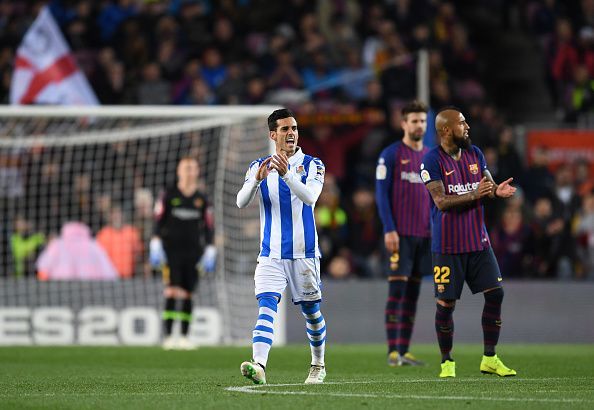 Real Sociedad fought hard and to their credit, valiantly against the league leaders. It proved futile though and given their European ambitions this term, questions must be asked after a performance like this.

They started slowly and rather than to take the game to Barcelona – who themselves were playing fatigued in the early exchanges – were more concerned about their defensive efficiency and having adequate numbers back to deal with their hosts’ counter-attacking prowess.

It was this mindset that gave Barca players the confidence within themselves that they could score at will and if for better service in the final third, they probably would have done before Lenglet’s header.

With only six points separating Athletic Bilbao in seventh (46 points) and 13th-placed Eibar, every point could prove pivotal in Sociedad’s race for Europe. Despite missing a few key players, they have important games against Getafe, Alaves and Espanyol before the season’s end: no easy games on their schedule.

So naturally, this game was one they needed to earn a result in. Adopting a defence-heavy tactic only proved to stifle their own attacks and present Barcelona with more opportunities to break them down. 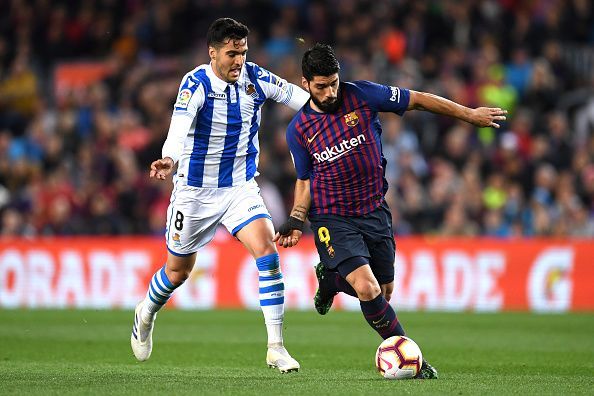 It was another frustrating evening’s work for Suarez, who huffed and puffed despite creating chances

As one of the commentators remarked, you don’t know what you’re getting on a given night with Luis Suarez. At his best he can be fearsome, unfazed as he delivers a 9 or 10/10 performance. But as he continues to age, deals with troublesome injuries and gradually loses the same attributes that gave him a real edge over opposition defenders, it’s clear he’s also losing his consistency.

In terms of goals and overall contribution to the team, he’s still up there and shines when they need him most. But individual displays, intricacies with regards to decision-making and the like, he does disappoint.

His 65.6% pass accuracy was a game-low for the hosts and despite creating one key pass, winning three aerial duels and completing two dribbles. There were more negatives than positives.

He was dispossessed on seven occasions and caught offside thrice. The former Liverpool player also missed a great opportunity after Messi’s mazy run and clever pass. So perhaps the club planning for a long-term Suarez replacement isn’t as far-fetched as it seems. In games against better oppositions, there’s no guarantee he’ll be afforded more chances than those he squandered in possession on this occasion. So although Barca won, he needs to improve or refine his overall game. At 32, is he really prepared to do that?

ter Stegen quietly made his presence felt again as Barca’s no.1 made important saves when called upon

It’s easy to force a narrative and one of football’s most common at present is that the world’s best goalkeeper is in the Premier League. Well, he’s not. David de Gea’s a quality goalkeeper, but the battle lies between Spain’s top two – Marc-Andre ter Stegen and Jan Oblak.

Both go about their business quietly and without much fanfare, even when making acrobatic saves and important interventions to save their team from dangerous situations. ter Stegen once again displayed his class when called upon against a dangerous Sociedad team, who created a few promising openings and really should have scored more than their eventual one on this occasion.

He made a smart stop to deny goalscorer Juanmi from close-range in the first-half, closing down the angles at his near post and spreading himself to block the Spaniard’s effort. Willian Jose should have hit the target from the rebound but blazed over.

Then, he made an acrobatic stop to thwart Ruben Pardo’s deflected effort after the break as it appeared destined to creep in at his far corner. Clawing the strike to safety, there was nothing he could really do to stop Juanmi from eventually scoring his tidy finish to equalise.

Juanmi equalised from close-range, Willian Jose had his moments but Oyarzabal struggled

In my preview, I outlined that Mikel Merino and Oyarzabal would have to perform well if Sociedad were to have much chance of earning a result in this one. Only one half of that duo did their job – talented winger Oyarzabal struggling to impose himself against a reliable Barca backline.

His match statistics speak for themselves: two shots, both off-target, three aerial duels won, one completed dribble, dispossessed three times and one foul committed over the 90 minutes.

As you can tell, he wasn’t involved enough in the game – evidenced by his lowly 32 touches – and often picked the wrong option in possession, whether that was too reserved or needlessly forcing play forward when he didn’t need to.

Willian Jose’s performance will always be remembered for his open goal miss in the first-half. Latching onto the rebound after ter Stegen’s initial save, the goal was gaping at his mercy before he fired wide over the crossbar. Who knows how the game might have transpired, had he converted from close-range on that occasion?

He created two key passes despite a poor 64.3% pass accuracy, completed three dribbles and made two clearances – though neither player was able to score from their two chances, like Juanmi eventually did.

It was a tidy close-range finish and deserved after his intelligent movement was spotted by Merino, whose threaded through ball was perfectly-weighted and caught Gerard Pique flat-footed to devastating effect. If only they had more of a clinical edge.

#1 Lenglet gets his first Barca goal, continues to shine 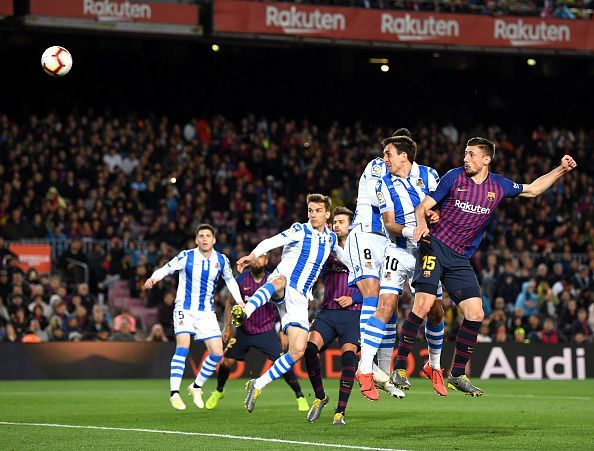 A lot has been said about Clement Lenglet this season. Having arrived from Sevilla for £30m last summer, his arrival coincided with Samuel Umtiti’s injury struggles – so he’d initially be a convenient replacement for his compatriot. Since then, his dependable performances at the back ensured he earned a regular starting berth alongside Gerard Pique.

Now though, critics are appreciating his newfound status: he’s not a rotation player nor competition for Umtiti, but instead has already shown the capability to be a long-term success with Barca going forward.

His transfer value continues to rise and why would it not? At 23, Lenglet is establishing himself as one of Europe’s best defenders in an ever-improving Barcelona side, one that have notoriously been seen to have a porous backline. With players like himself and Umtiti at the heart of the defence, they’re proving the stereotype to be outdated.

After almost a full season getting accustomed to life with the defending champions, it seemed only natural that he finally scored his first goal under Valverde’s watch in another display where he let his defensive work do the talking. He showed great anticipation and timing to meet Ousmane Dembele’s corner delivery, leaping above the challenge of two defenders to head beyond Geronimo Rulli into the far corner with aplomb.