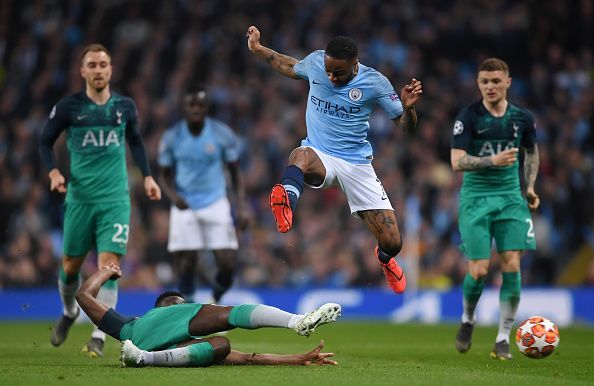 After a seven-goal Champions League quarter-final thriller in midweek, can Manchester City refocus and beat Tottenham once more to return top of the Premier League?

Manchester City will be looking to exact revenge while boosting their Premier League title hopes when they host Tottenham again today.

After their dramatic 4-3 win on Wednesday saw Spurs progress into the Champions Leaguesemi-finals through the away goal rule, Pep Guardiola’s men know they need to refocus quickly – otherwise what promised to be a historic season will end in tatters.

Liverpool hold a two-point lead atop the league standings, though have played a game more. City still have away games against Manchester United and Burnley, as well as a tricky test against Leicester among their final few fixtures of the campaign, so it will not be straightforward.

Raheem Sterling is leading the way with the Player of the Year voting having begun and the 24-year-old continues to flourish as a key component within Pep Guardiola’s 4-3-3 system.

Being afforded more creative freedom and attacking opportunities in transition has led to him enjoying improved production, sharper finishing and better decision-making – while Kevin de Bruyne’s return to form couldn’t have been timed any better.

The Belgian midfielder has struggled with persistent injuries this term but became the first player since 07/08 to create three assists in a UCL quarter-final this week and continues to prove why he’s arguably their best player.

Heung-Min Son’s brace in midweek proves Tottenham can cope without talisman Harry Kane leading the line, while Christian Eriksen and Dele Alli have both provided flashes of their creative brilliance even when not on top form. 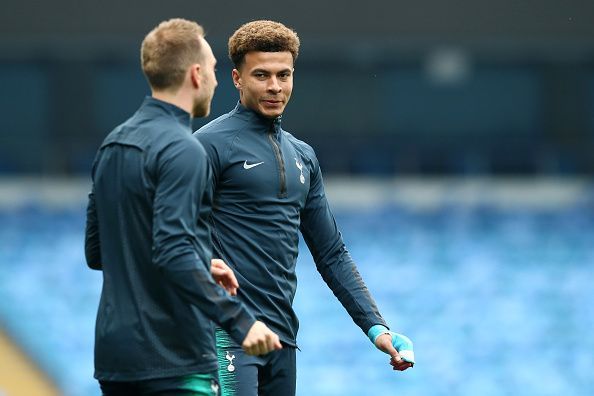 Eriksen and Alli are two of Spurs’ best players and even when not on top form, can create chances at will

The aforementioned trio will be key to Pochettino’s plans as he hopes to avoid a repeat of Wednesday’s result – a narrow defeat – as they aim to solidify their top-four place. Ahead of kick-off today, only three points separate themselves and sixth-placed Manchester United, so every win matters with five matches remaining.

Wednesday’s encounter was memorable for many reasons, not least being a seven-goal thriller that went right down to the wire in stoppage-time. City fans left with broken hearts after VAR intervened to stop Sterling’s strike sending them into the UCL semis – but frustration must fuel the players’ fire as they’ve still got a job to do: retaining the Premier League title.

There was some suspect defending and individual mistakes on show, but I’d back City to atone for their errors against a Tottenham side who have quality but are unreliable at the best of times.