Amir Khan could have easily just stayed at home, with the possibility of a bigger payday against Kell Brook in the offing. Everything was supposedly agreed between the pair – years in the making – but the 32-year-old Bolton-born boxer had other ideas once an unmissable opportunity arose.

Terence Crawford (35-0, 26 KOs) was in search of a challenge with his welterweight title up for grabs and Khan gladly accepted. Aware it wouldn’t be easy, he embraced the critics who claimed it was his final shot, as he knew it himself too.

Kell was watching in the New York crowd and considering his comments, it’d be interesting to see what he thought of the fight. One that could’ve been all over with a brutal first-round knockdown.

It wasn’t power nor precision of Crawford’s punches that startled the crowd, but perhaps the ruthlessness of it all. Khan had started brightly, as you’d expect, and connected with a few good combinations without too much fanfare.

It was an encouraging two-minute spell and Crawford had barely landed any strikes of his own. Until he spotted a chink in Amir’s armour as he over-reached, hitting him cleanly twice in quick succession on his blindside and walking off with Khan stunned to the canvas.

He spent the next minute or so trying to survive, essentially, and while it was a valiant effort from Khan in the forthcoming rounds, Crawford sensed his vulnerabilities without needing to reach top gear.

Failing to follow up on promising combinations meant that on the judges’ scorecard, as well as mine, Amir didn’t earn much more than a solitary round at best from their eventual six contested.

It spoke volumes for a man as ambitious as him, that Terence was in control and seemingly going through the motions – though his punch output increased as he sensed the end was near in rounds four and five.

Khan told his corner he was struggling with his right arm and later elbow, though Crawford was simply no match for him. It was gradually turning into a striking clinic, Khan soaking up punches before loading a few of his own – only to wobble and weave away towards the ropes every so often.

The anticlimactic finish typified the fight itself: Crawford landed an accidental low blow early in round six and despite referee David Fields stressing Khan had five minutes to steady himself, he told him and trainer Virgil Hunter he was unable to continue.

On my card, I scored the bout 49-45 in Crawford’s favour and in truth, who knows what could have happened had this continued? It was an interesting spectacle and refreshing to watch Crawford at work but Khan simply doesn’t appear cut out to compete at world level anymore. 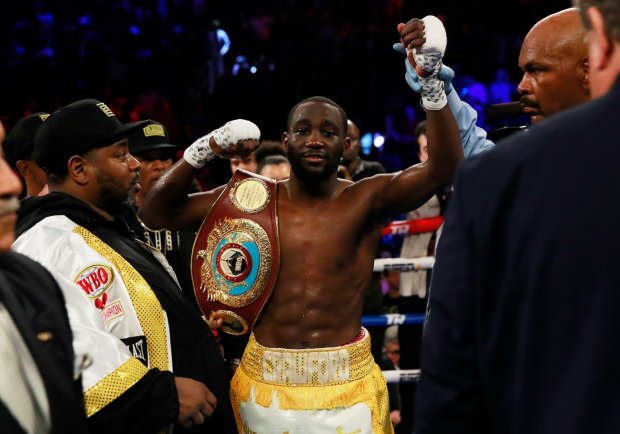 Crawford celebrates retaining his title after an impressive performance against Khan

Crawford rather bizarrely refused to admit his shot, albeit an accidental one, was a low blow: “First of all, it wasn’t and second of all, Virgil knew the fight was going in a bad direction, he saved his fighter before anything bad happened to him.”

Confusion and delirium ensued as most believed Khan had taken an easy way out, though the referee revealed post-match that it was Hunter who asked for the fight to be stopped, regardless of the low blow, after 47 seconds of the round.

“It’s obvious he was in a lot of pain. I thought it was the bone chip in his elbow but he indicated it was the low blow. Sometimes you can continue, sometimes you can’t, it depends on how hard you were hit in the testicles. I asked him if he could, he said no.”

As for Khan, he did his best to explain his side of the story to an underwhelmed crowd, saying: “The fight was just getting interesting. I now realise why he [Crawford] is one of the best pound-for-pound fighters in the world.

I’m a good boxer, but he was showcasing great skills and movement. I was caught with a shot right below the belt, could feel it in my stomach and legs. I’m a warrior, would never give up a fight like this but I was in pain and couldn’t continue.”

Crawford is now 13-0 in title fights and after another impressive win, it’ll be interesting to see what’s next for both men.