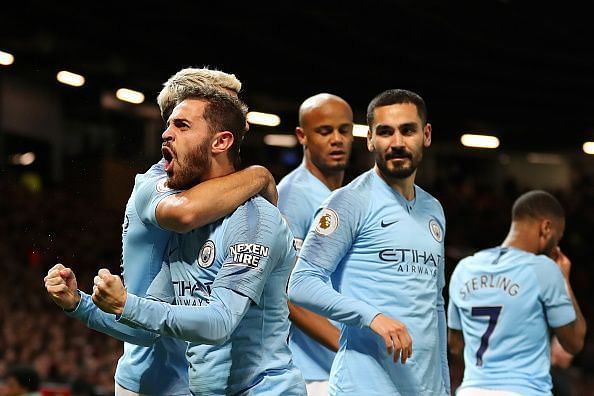 Manchester City took a big step towards retaining the Premier League title with a 2-0 win over rivals Man Utd, but what were five talking points from their Derby win?

Silva netted his sixth league goal of the campaign with a clever close-range finish after 53 minutes, leaving Luke Shaw for dead before rifling low and hard into the bottom corner. David de Gea had little chance of saving that effort, but should have done better at his near post to deny substitute Leroy Sane’s finish on a devastating counter-attack twelve minutes later.

The defeat is United’s seventh in their last nine games, with Ole Gunnar Solskjaer’s men struggling for both confidence and consistency as they pursue a Champions League place with three top-flight games remaining this term. With all of that in mind, here’s a look at five talking points from another intriguing Manchester Derby:

#5 Lukaku and Sane in stark contrast from the subs’ bench 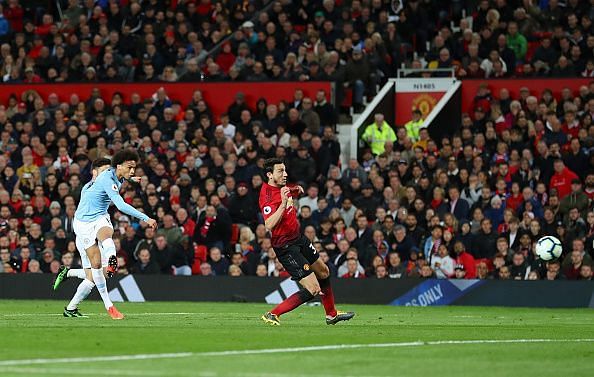 Sane’s effort beat de Gea at his near post, but his impact was in stark contrast to Lukaku’s for United

United had a few notable surprises while City made three changes to the side that beat Tottenham 1-0 on Saturday. Even when you compare both benches, the attacking quality having to bide their time on the bench is remarkable. Leroy Sane, £60m man Riyad Mahrez and Gabriel Jesus vs Anthony Martial, £75m man Romelu Lukaku and an out-of-form Alexis Sanchez – still dangerous – to choose from for Solskjaer.

The real battle I’m focusing on though, was between Lukaku and Sane. Both forwards have seen their long-term futures questioned – for different reasons – though were introduced in the second-half.

Sane came on after Fernandinho’s knee injury in the 50th minute, but with United needing fresh attacking impetus after City’s spirited display after the restart, Lukaku was tasked with helping steer an unlikely comeback with 20 minutes left.

Leroy was pivotal in the build-up to their first goal, albeit a brief warning sign before Silva’s finish. A well-worked move saw him attempt to cut the ball across goal for Sergio Aguero – but the Argentine was denied by an important interception by Victor Lindelof.

It ultimately counted for little though, as City went and scored 35 seconds later, this time attacking the other side. Then it was he who doubled their lead with a powerful effort driven into de Gea’s near post after Sterling teed him up on the counter-attack. Despite his best efforts, the Spaniard could only parry it into the bottom corner.

As for Lukaku, well, his presence didn’t have a significant impact on the game. His evening’s work was typified by a miscued shot that flew horribly wide of goal and in truth, it didn’t help his case. He, alongside Pogba, was scapegoated for a number of United’s shortcomings under Mourinho and hasn’t really had a fair crack at the whip under Ole’s current reign despite flashes of his ability.

The Belgian’s match statistics speak for themselves: 18 touches, dispossessed five times, one tackle completed, one shot (off-target) and 57.1% pass accuracy – a game-low. Naturally the sample size isn’t big because he only played 20 minutes, but you get the point. For someone so eager to impress, whether that be United or other interested suitors, he needs to do more to justify a starting berth – even if his teammates are struggling for form. 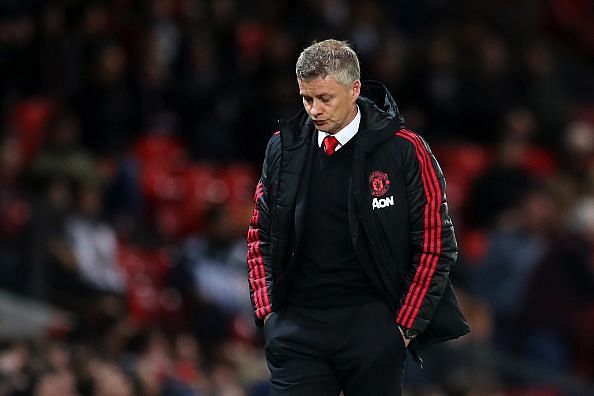 It’s a team that he’s inherited but not exactly one that he’s utilising to the best of their capabilities and again on this occasion, Ole Gunnar Solskjaer’s tactics were puzzling as United started brightly but faded after an encouraging half-hour display. Matteo Darmian made his first league start since mid-December as an auxiliary centre-back, while Fred partnered Andreas Pereira and Paul Pogba in a midfield trio.

So the hosts were lining up against their local rivals in a 5-3-2 formation out of possession, and a 3-5-2 with the ball. Ashley Young and Luke Shaw providing width, while Jesse Lingard surprisingly partnered Marcus Rashford up-top – with varying degrees of success.

Fred, despite encouraging flashes, was disappointing. Pereira worked hard and did okay despite some frustrating moments, while the same could be said for Pogba. His individual brilliance was on display but he found himself on the periphery too often.

Why choose Lingard over Martial in a more attacking role? Nemanja Matic was poor against Everton so his omission is justified, but why play a five-defender formation when your biggest rivals come to town?

After an energetic 30-minute burst of pressure, it invited unnecessary danger and forced players back behind the ball too often, which can be easily exploited if one of the midfielders – often Fred or Pogba – isn’t disciplined enough to hold their position. It’s how they conceded the Sane strike and if they had a more positive mindset, perhaps they’d have created more clear-cut opportunities to test Ederson.

#3 Vincent Kompany quietly impressive and needed to be 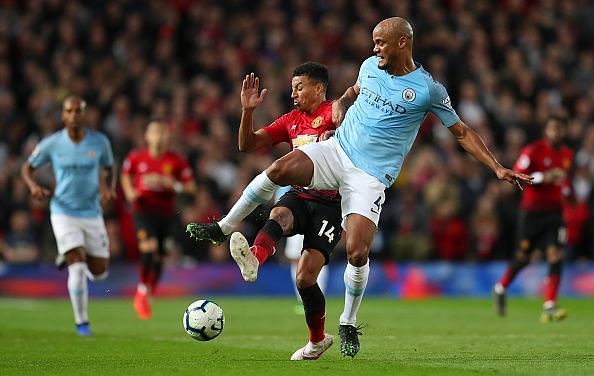 Kompany delivered a real captain’s performance, despite being on a booking after 10 minutes

Occasionally playing with fire, Vincent Kompany crucially didn’t get burnt on an evening where he was again put to the test and passed – despite a shaky start.

Ederson and Fernandinho’s mistakes didn’t exactly help the experienced Belgian’s cause as he attempted to play out from defence or pass forward into space for teammates. Not least with a marauding Marcus Rashford battling with you for possession. It’s easy to forget that Kompany, 33, has struggled with injuries and a consistent run of games for so long that he’s only completed a full 90 minutes on five occasions in 2019.

Up against a determined United side eager to atone for their 4-0 thrashing by Everton last weekend, he needed to be sharp and a commanding presence at the back for his teammates. Although there were a few nervy moments, he came through unscathed and surprisingly did so with a booking for 81 minutes after committing a cynical blocking foul on Rashford as he attempted to advance beyond him in transition.

It was rough but necessary, considering he’d overpowered the forward as they previously tussled again for possession just minutes earlier and went unpunished. It was equally the type of foul he’s content to commit if he feels threatened enough by an opposition attack.

He didn’t shy away after the caution, instead standing tall to lead by example alongside Aymeric Laporte at the heart of City’s backline. He completed three tackles, two clearances, one block and aerial duel won to accompany his 98 touches and 89.7% passing accuracy. Quietly, he delivered a real captain’s performance and although he’s not a regular starter under Pep, has proven time and again that he’s dependable in big games like these. 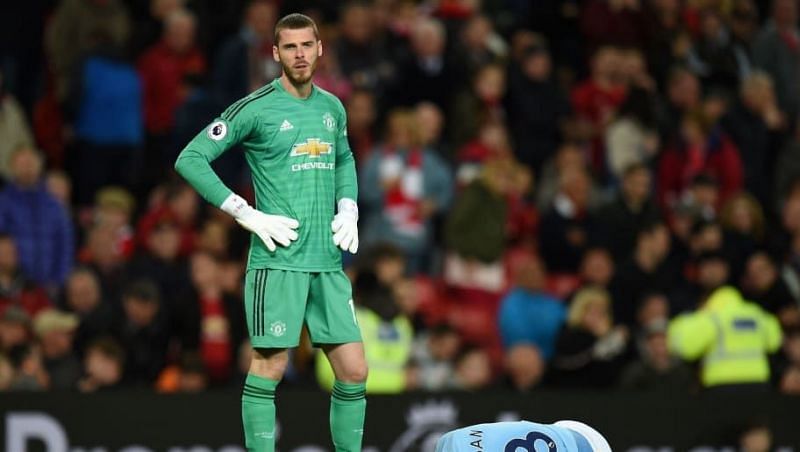 The issue with de Gea is that his mistakes are magnified when they lead to goals, but can easily be swept under the proverbial rug if they are recoverable or don’t lead to anything. As previously mentioned, there wasn’t much he could have done to stop Bernardo Silva’s strike. It was clever, a deft finish and instead Shaw should have done more to block the Portuguese’ effort, even if it looks damning on the replays.

Ultimately though, he was beaten at his near post. Not once but twice in the same game after Sane’s powerful effort crept in, as City’s 2-0 lead sees them reclaim top spot and naturally, the Spaniard’s poor form will provoke questions for many to debate over the coming days – is he unsettled by transfer talk again? Should Ole give him some time out of the side with the season almost over?

It’s easy to forget that just like others, goalkeepers can have poor games themselves, but de Gea’s are becoming more prevalent and increasing in frequency every season. Arguably one of their best and most important players, he’s rightly heralded for producing excellent saves, keeping his United teammates in games they shouldn’t be, but it comes with the territory: a world-class ‘keeper shouldn’t be making as many errors as he does. 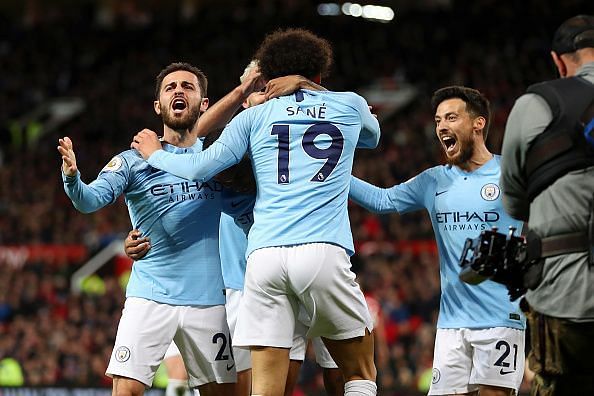 Bernardo, Sane and David Silva celebrate during City’s 2-0 win over their neighbours

After a quiet showing against Tottenham last time out, David Silva was City’s midfield metronome and blossomed – proving the focal point in attacks while creating chances at will.

Bernardo was the opposite, at least in the first-half, as the Portuguese international endured a lethargic start despite his excellent form of late. Following the break though, Bernardo played with more freedom and combination play saw him get into promising positions in the final third, particularly during the build-up to his goal.

Despite an average 79% pass accuracy, he completed five dribbles, made one interception and scored the all-important opener from which kickstarted City’s pursuit of another goal soon afterwards. Sane’s introduction saw him drop deeper in midfield to partner David and Ilkay Gundogan as part of the central midfield trio, where he is comfortable covering every blade of grass and frustrating opponents no end.

David Silva meanwhile, completed two tackles, one interception and blocked shot alongside his game-high four key passes (88.6% pass accuracy). He didn’t get a goal or assist but that shouldn’t take away from an impressive display where he imposed his quality on the game and dictated play – leaving United the unenviable task of trying to cut passing lanes and pressure a rampant City side into mistakes.