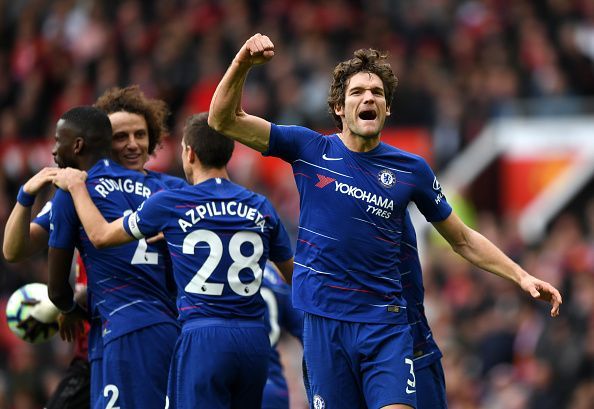 Manchester United were held to a 1-1 draw by top-four rivals Chelsea at Old Trafford, but which players struggled while others excelled?

Marcos Alonso‘s second league goal of the campaign ensured Chelsea earned a share of the spoils during their 1-1 draw with Manchester United at Old Trafford on Sunday evening.

The Spanish fullback has been rightly criticised for poor performances this season, but it was another error by compatriot David de Gea which gifted him a close-range opportunity after fumbling Antonio Rudiger’s powerful strike from distance.

De Gea has been under-fire for poor goalkeeping displays of late, which continued against the Blues on this occasion. However, it was creative midfielder Juan Mata, on his 31st birthday, who broke the deadlock after 11 minutes.

Neither side created many clear-cut opportunities after the break. Willian came close at one end while Pedro’s goalline clearance in stoppage-time meant Chelsea held firm for an important point – which sees them remain fourth with a two-point gap over Arsenal (5th) and three ahead of Manchester United (6th). Without further ado, here’s a look at five hits and flops from an intriguing 1-1 draw: 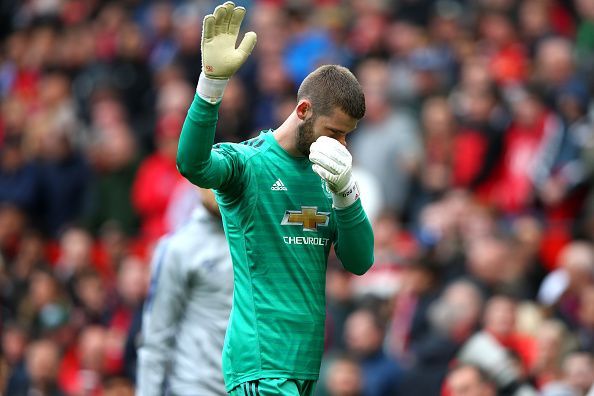 Given his poor form of late, it was rather surprising that Chelsea didn’t opt to test his nerves in the early exchanges with some speculative efforts. When they did, they snatched a dramatic equaliser before half-time.

Rudiger’s powerful strike from 35 yards out saw the Spaniard fumble, rather than comfortably smother the shot and Alonso duly slid across to convert a rebound into the bottom corner.

It happened so fast that naturally replays and slowed footage makes his error appear more damning, but he didn’t have much protection from his defenders either as they reacted too slow to help after the shot was taken.

That is his third error leading to a goal conceded in United’s last four games (all comps), which is as many as they suffered in his previous 123 matches combined. He was called into action and made an important last-gasp save, denying Higuain after Pedro’s excellent pass into his path – otherwise, he’d have featured higher on the list here. 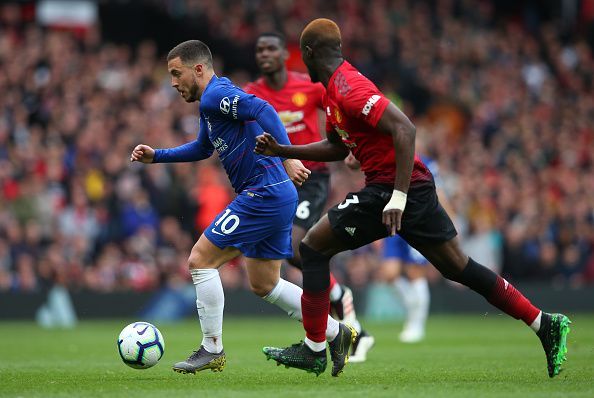 Hazard was a constant threat that United needed to be wary of, despite not getting on the scoresheet

Eden Hazard was, unsurprisingly, Chelsea’s best creative outlet as usual and although he didn’t score or create an assist on this occasion, did plenty in attack to threaten United’s backline and force them into constantly tracking him where possible.

Similarly to the man-marking job assigned to Ander Herrera a few seasons prior, the Belgian international had plenty of opposition focus on him as they looked to limit his influence on the game.

As you’d expect though, he took it in his stride and galloped forward with the same dangerous slaloming runs and close-control dribbling that has become somewhat of a trademark to his arsenal.

He completed six of his eight attempted dribbles, won 11 duels and created two key passes with 88.4% pass accuracy too. Unable to test de Gea himself, if he had combined better alongside other attacking teammates, Chelsea might have stolen all three points. 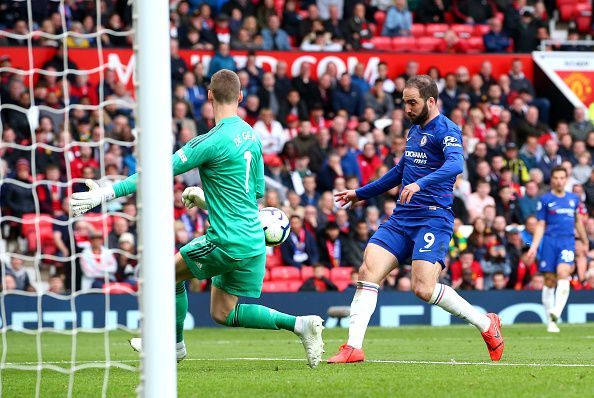 Right on cue, Higuain appears in this list and struggled once again to convince many why he’s worth extending the loan agreement they have with Juventus beyond this summer.

The 31-year-old Argentine had a game-low 28 touches and from afar, you might assume he was starved of service. Instead, though, he was wasteful in possession and sloppy in attack.

This made things much easier for Eric Bailly and Victor Lindelof to deal with, further compounding his frustrations as combination play alongside Hazard was proving unsuccessful and saw plenty of promising opportunities go to waste.

Misplaced passes and poor decision-making showing how Chelsea lack invention in the final third unless Hazard is inspired, he was caught offside a whopping five times over the 90 minutes while being dispossessed on four separate occasions. Then to make matters worse, he squandered a great chance in stoppage-time – shooting at de Gea from point-blank range after Pedro’s excellent pass! Not good enough. 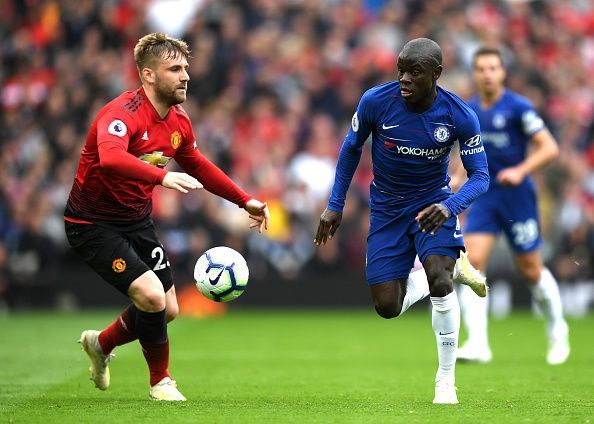 A lot has been said about Shaw, his consistency levels and the fact he was a boyhood Chelsea fan, released by the west Londoners for “being too small” in his early teenage years. Well, on his tenth senior appearance against the Blues, he quietly delivered another impressive display and should’ve been rewarded with a win for his endeavours.

His link-up play down the left with Romelu Lukaku and goalscorer Mata was excellent to see. It was the fullback’s piercing through ball which set Lukaku through on-goal with only Kepa to beat and although that chance didn’t result in United’s opener, he created the assist for Mata’s finish with a clever reverse pass inside the box after displaying composure and good decision-making to bomb forward to begin with.

Luke‘s creative abilities were on show here: two key passes (82.1% pass accuracy) and three successful long balls – but he crucially didn’t shy away from his defensive responsibilities either. Four clearances and two blocks despite not completing a tackle, United have struggled for form this term but Shaw’s been one of their most reliable performers and continues to prove his worth in big games like these. 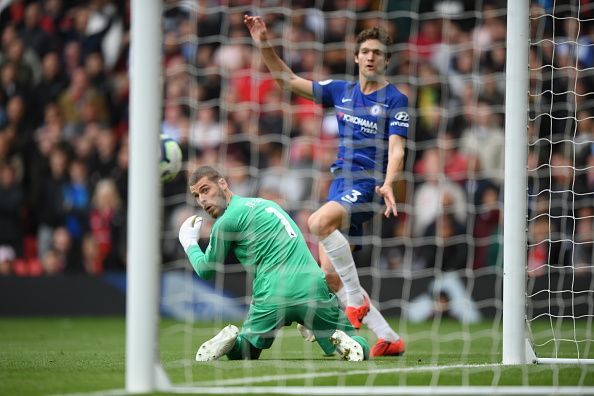 Who’d have thought it? After the turbulent season he’s had, Marcos Alonso finally finds himself in the hits column for once and it’s thoroughly deserved. Defensively suspect and questionable in tackles, the experienced Spaniard produced a solid display despite again showing some of the flaws which make him so susceptible to fans’ criticism.

He completed two tackles, three interceptions and a game-high six clearances as United enjoyed early spells of pressure. Despite only winning 41% of his duels (7 of 17 total), he recorded a respectable 83.7% pass completion rate too.

However, his crossing was inaccurate to say the least while he found himself dispossessed (4) too often. He attempted four crosses, none of which were successful – but you could not fault his effort. Only Nemanja Matic (88) had more touches than the Spaniard’s 83, as he was eager to get forward and create chances with Chelsea often struggling for creativity.

He reacted quickest before taking his finish well, slotting into the bottom corner after Rudiger’s initial effort was fumbled – despite the fortuitous circumstances which presented the chance at his feet. Defending better than we’re used to seeing this season, the timing couldn’t be better placed with must-win fixtures to come between now and next month when the campaign is complete.

Chelsea battled hard and remain in the Champions League qualification places, while the first leg of their Europa League semi-final against Bundesliga side Eintracht Frankfurt awaits this coming Thursday.