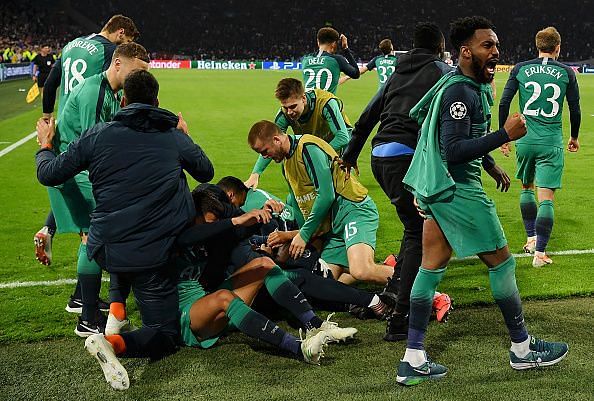 Tottenham defied all odds to recover against Ajax with a 3-2 win, booking an all-English UCL final in the process – but who struggled while others excelled in Amsterdam?

24 hours after Liverpool‘s incredible comeback, Tottenham replicated the same result in more difficult circumstances away from home comforts, earning their place in an all-English Champions League Final after a 3-2 win (3-3 agg*) over Eredivisie giants Ajax.

With a three-goal deficit to overturn, their star striker Harry Kane nervously watching on from the stands injured, they needed a miracle. 45 minutes left to play, Lucas Moura was on hand to produce his third career hat-trick, second this term, inspiring his fearless teammates into a last-gasp comeback after slamming home Spurs‘ third in the fifth minute of stoppage-time.

Ajax players, who had battled so hard and were deservedly in-front, fell to the turf. They couldn’t believe their dreams were being crushed so brutally with their home supporters helpless. Mauricio Pochettino‘s men progress through courtesy of the away goal rule after drama in Amsterdam, but who were five hits and flops from another Champions League thriller on this occasion? 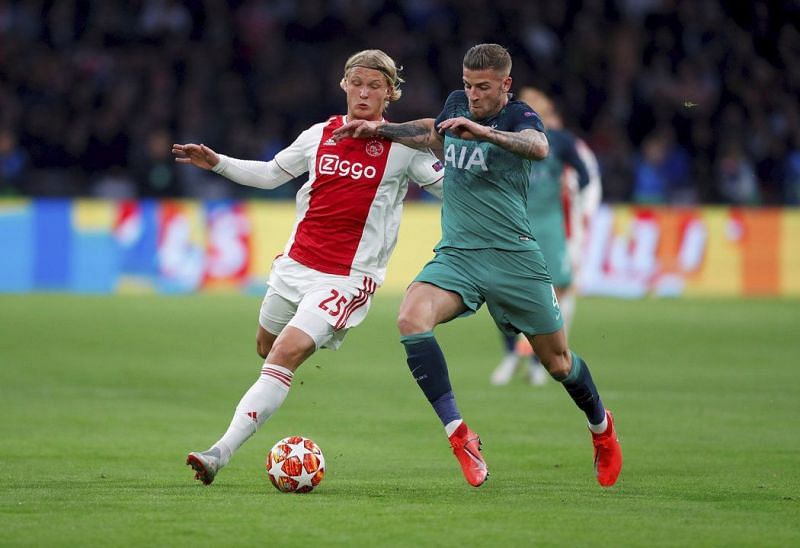 Dolberg, a late replacement for the injured David Neres, struggled to impress in attack

It’s unfortunate that Kasper has earned his way into the flop section on this occasion because in truth, he wasn’t even expecting to play. David Neres’ injury in the warm-up meant the Danish international had a golden opportunity to help Ajax into the Champions League Finals, but he was unprepared and his individual display reiterated precisely that.

He won five of 12 duels contested on an evening where Tottenham recovered another unlikely lead and despite a few nice touches, he was often subdued by the visitors’ backline in the final third. Trying his utmost with some decent link-up play at times, it was few and far between for the 21-year-old, who barely touched the ball and failed to get involved in many of Ajax’s attacks.

With 66.7% passing accuracy, he had a lowly 18 touches and found himself more involved defensively than in more creative areas where he’s known for flourish. Three tackles and one interception, coupled with a booking and four fouls committed, it typifies a frustrating evening’s work for the talented forward – one of the reasons he’s failed to truly kick on in the last twelve months. The experience will be a humbling one for him as he’s still only 21, but not yet good enough at this level with a lot to learn. 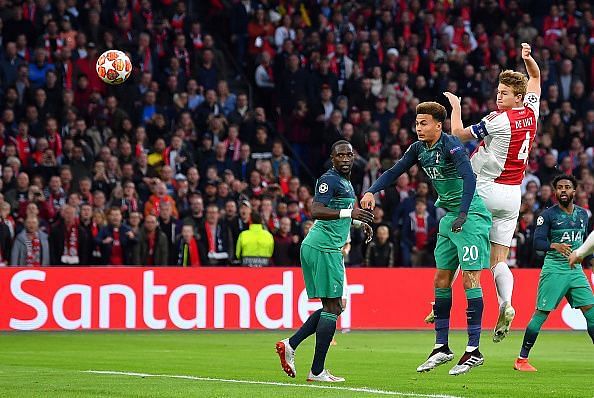 de Ligt broke the deadlock early on with a pinpoint header, defended well but it ultimately wasn’t enough

Having set the tone with a bullet header after five minutes, Matthijs de Ligt ultimately deserved better. He showed great awareness and anticipation – just like against Juventus in the quarter-finals – breaking the deadlock after leaving Kieran Trippier in his wake, leaping above Dele Alli like he wasn’t even there. Hugo Lloris had no chance.

With a game-high 11 aerial duels won for the hosts, it was another busy defensive display from the 19-year-old. Six clearances, three interceptions, two blocks and one tackle completed alongside no fouls committed, his defensive effort unfortunately didn’t have any baring on the final result. Despite this, he was one of few Ajax players that emerge from this last-gasp defeat with much credit really, as poor game-management gifted Spurs a way back into the tie.

A shame we won’t get the chance to see him compete in next month’s showpiece final, where he would have had the opportunity to make history – being the youngest Champions League-winning captain after Marseille’s Didier Deschamps back in 1993, aged 24.

This is a painful experience but one he’ll remember for the rest of his life and naturally fuel his fire for future seasons as he strives to continue developing, whether that be in Amsterdam or elsewhere with Europe’s elite circling.​ 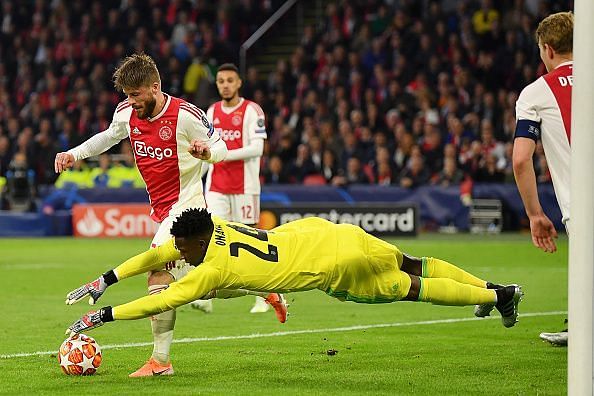 It was his lofted cross into the box which de Ligt headed home to double Ajax’s aggregate lead after five minutes, but the 32-year-old turned villain in a frantic second-half with a moment of madness. Andre Onana’s excellent point-blank save denied Fernando Llorente as Spurs probed and with players packed in a goalmouth scramble, the young Ghanaian attempted to collect the ball between his gloves.

Rather than trusting his ‘keeper and leaving it to him though, Schone panicked and attempted to clear his lines. Instead of doing so, he presented Lucas with the ball and moments later, Ajax’s three-goal cushion (and two-goal lead on the night) had been erased.

It was a needless action, not least in the middle of a goalmouth scramble, and the Brazilian duly punished him. Typical it was their most experienced player who committed the mistake, where you’d expect better in that situation given the high-pressure environment.

He was their best passer (89.7%) besides Frenkie de Jong, completed four tackles and didn’t commit a foul either – but failed to really impose himself in midfield and found himself bypassed far too easily in transition. Unsurprisingly replaced on the hour mark for Joel Veltman, he certainly will be replaying that moment in his mind for days to come. 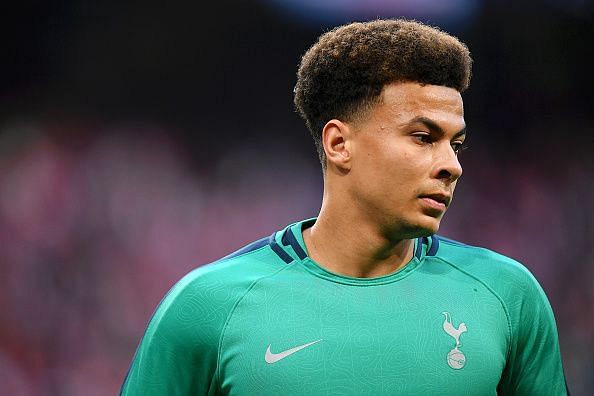 Dele was quietly impressive and needed to be, as Spurs erased a three-goal deficit in an inspired second-half

An honourable mention must go to Fernando Llorente after his immediate impact from the substitutes’ bench was felt. Ajax couldn’t handle him. However, a lot has been said about Dele Alli and his inconsistencies this season – injuries have ravaged his form, while questions over off-field commitments and whether he’s been struggling post-World Cup continue emerging.

In this game, he stepped up. Not immediately though, as he was suspect defensively and caught out against an alert de Ligt from Ajax’s corner after five minutes. All of the Tottenham players were.

Despite this, you could see him making a concerted effort on both sides of the pitch – defensively and from a creative sense. He caused Ajax’s backline plenty of problems and should have had a hat-trick of assists, but will be content with a match-winning two. It was his perfectly-weighted through pass for Heung-Min Son that the South Korean squandered, but provided him motivation to deliver more of the same. He forced Onana into a good save at his near post in the second-half, just seconds before the game was shifted on its head.

Turning creator once more, he combined well with Lucas in transition after Danny Rose’s crossfield pass for the Brazilian’s brace. It was his clever reverse pass into the forward’s path that was rewarded with a last-gasp winner.

With four key passes, two tackles and dribbles completed (76.3% pass accuracy), it was a refreshing display from someone who gets more criticism than is warranted. Despite getting dispossessed, losing duels and enduring close calls, his head never wavered. This has been a difficult season for him on a personal level and yet he can still quietly enjoy games like these with pressure at its highest. 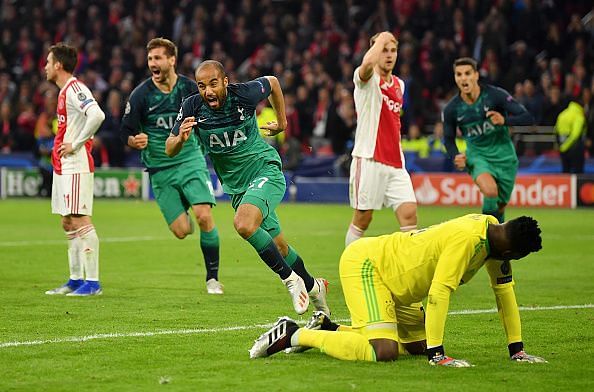 Moura wheels away to celebrate his hat-trick, sealing Spurs’ passage into the Champions League Final

Matchwinner and what a time to come up clutch! Lucas has really come into his own over the last few months for Tottenham and this hat-trick performance typifies his marked improvement this term.

He has always been one of those players where you doubt their ability to consistently deliver when called upon. His finishing, decision-making and overall efficiency in the final third have all developed – while an infectious desire to press and force mistakes from the front is a welcome sight to see.

His first goal was deftly placed and much-needed as Hakim Ziyech had just hit the woodwork up the other end, but as for his second? Ridiculous. Even with Lasse Schone’s mistake, he had no right to score from there: wriggling his way beyond opposition challenges as they attempted to clear their lines. It was futile as he slotted into the bottom corner from a tight angle in the goalmouth scramble.

Combining well with Alli in particular, his well-taken winner was precisely that: fifth minute of stoppage-time, potentially their last attack of the game and he struck the ball sweetly on the turn and wheeled away to celebrate with sheer pandemonium as it flew into Onana’s bottom corner with aplomb.

Post-match, Christian Eriksen admitted Spurs were lucky and that Lucas deserves a statue. After a heroic goalscoring display like that, he’s fired his teammates into their first ever Champions League Final and rightly, it’s the most memorable night of his career. Nothing less than he deserves.