Kemar Roofe’s deft finish during a controversial second-half proved enough for Marcelo Bielsa’s Leeds United as they earned a slender 1-0 lead over Derby County in their Championship playoff semi-final fixture at Pride Park.

Frank Lampard’s Derby must rewrite history if they are to progress into this year’s Championship Playoff Final on May 27. No side has ever lost the semi-final first leg at home and managed promotion to England’s top-flight, so the odds are certainly stacked against the Rams ahead of their return leg on Wednesday.

There wasn’t much in the way of action in the first-half, bar Stuart Dallas’ speculative effort which flew over the bar for the visitors.

However, a well-worked passing move and excellent through ball from winger Jack Harrison – his fourth and most important assist of the campaign – saw Roofe latch onto the ball before duly slotting home beyond goalkeeper Kelle Roos. 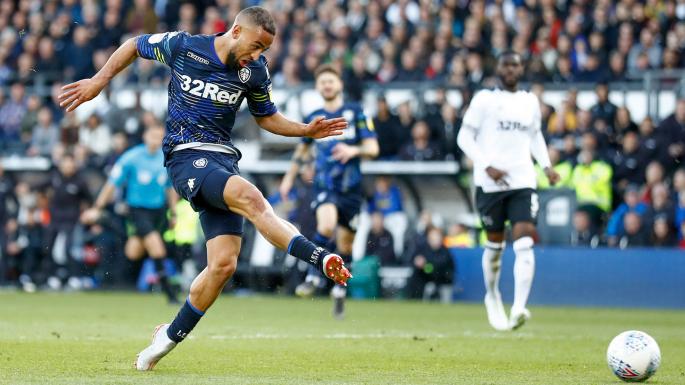 Controversy as penalty decision is overruled

The second-half burst into life after Roofe’s goal and unsurprisingly, the game wasn’t without controversy at Pride Park either. It’s nothing less than you’d expect in a game with such high stakes as this one, though Harrison almost went from hero to zero at the other end.

Harry Wilson’s probing pass was inches away from finding Jayden Bogle on the far side, but the midfielder (on-loan from Manchester City) slid wildly and caught the wingback in the box.

Referee Craig Pawson originally pointed for a Derby penalty but after consulting his linesman on the far side, overturned the decision and awarded Leeds a free-kick. A contentious moment which could’ve had match-defining ramifications for the tie itself, video replays showed Pawson’s initial judgment was perhaps the correct one. Bogle (right) goes down under Harrison’s challenge in the box. (Picture source: The Times)

Harrison didn’t win the ball and impeded Bogle, though the counter-argument from the linesman’s perspective was that the attacker clearly had one hand on Harrison, which shifted him off-balance enough to commit the foul.

Buoyed by the decision going against them, Derby persisted in their attempts to get back into the game – without truly testing Leeds’ backline and in particular, goalkeeper Kiko Casilla. Mason Mount (on-loan from Chelsea) and Wilson were getting increasingly involved on the ball but the team collectively struggled to turn their possession into clear-cut opportunities. They failed to register a single shot on target throughout the 90 minutes.

Mateusz Klich was fortunate to avoid being sent off after headbutting defender Fikayo Tomori (on-loan from Chelsea), having lost possession in a promising position for the visitors. The Polish international, 28, will not receive any further disciplinary action after Pawson booked him in the aftermath – but it was another in a handful of decisions that went in Leeds’ favour.

It means Lampard’s men have it all to do if they are to overturn their slender deficit at Elland Road in midweek, although stranger things have happened and they’ll certainly take heart from this week’s Champions League comebacks.

The winner will play against either Aston Villa or West Brom on May 27 at Wembley, for a place among the Premier League’s big boys. Goals from Conor Hourihane and a Tammy Abraham penalty sealed a 2-1 win for the Villains in their first leg fixture, earlier on today.