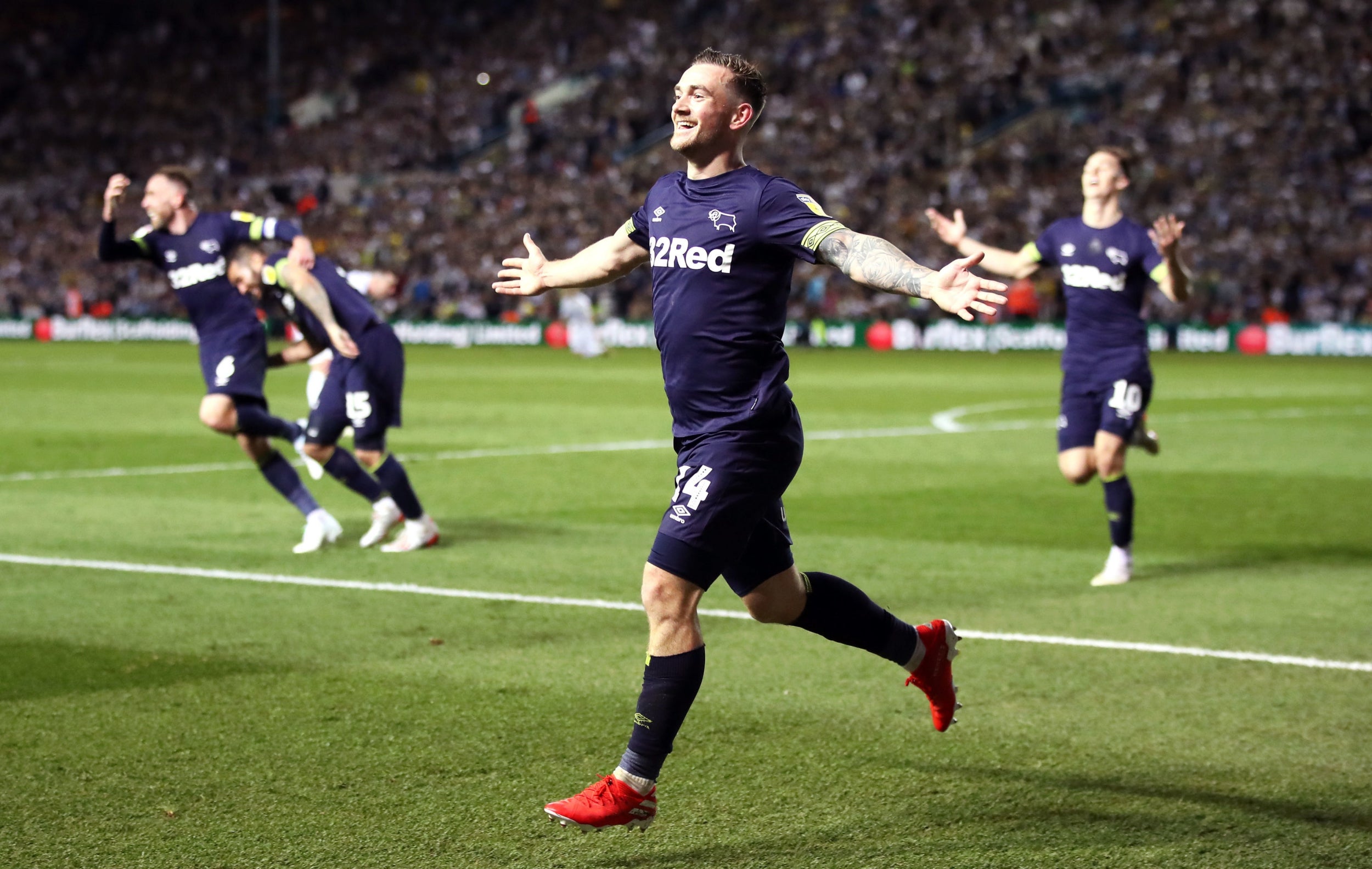 Jack Marriott proved an inspired substitute with a brace to help Frank Lampard’s Derby make history, overturning a 1-0 deficit in an unpredictable six-goal thriller at Elland Road, sealing their place at Wembley in the Championship Playoff Final – against Aston Villa on May 27.

Leeds had a one-goal first leg cushion to add to. Hungry and motivated to seal their place at Wembley, Marcelo Bielsa’s men were aware of what they needed to do.

Frank Lampard’s men were eager to spoil their big night at Elland Road though, with history and a point to prove both interesting sub-plots. After all, overturning a deficit away from home would see them become the first team in Championship playoff history to successfully do so. 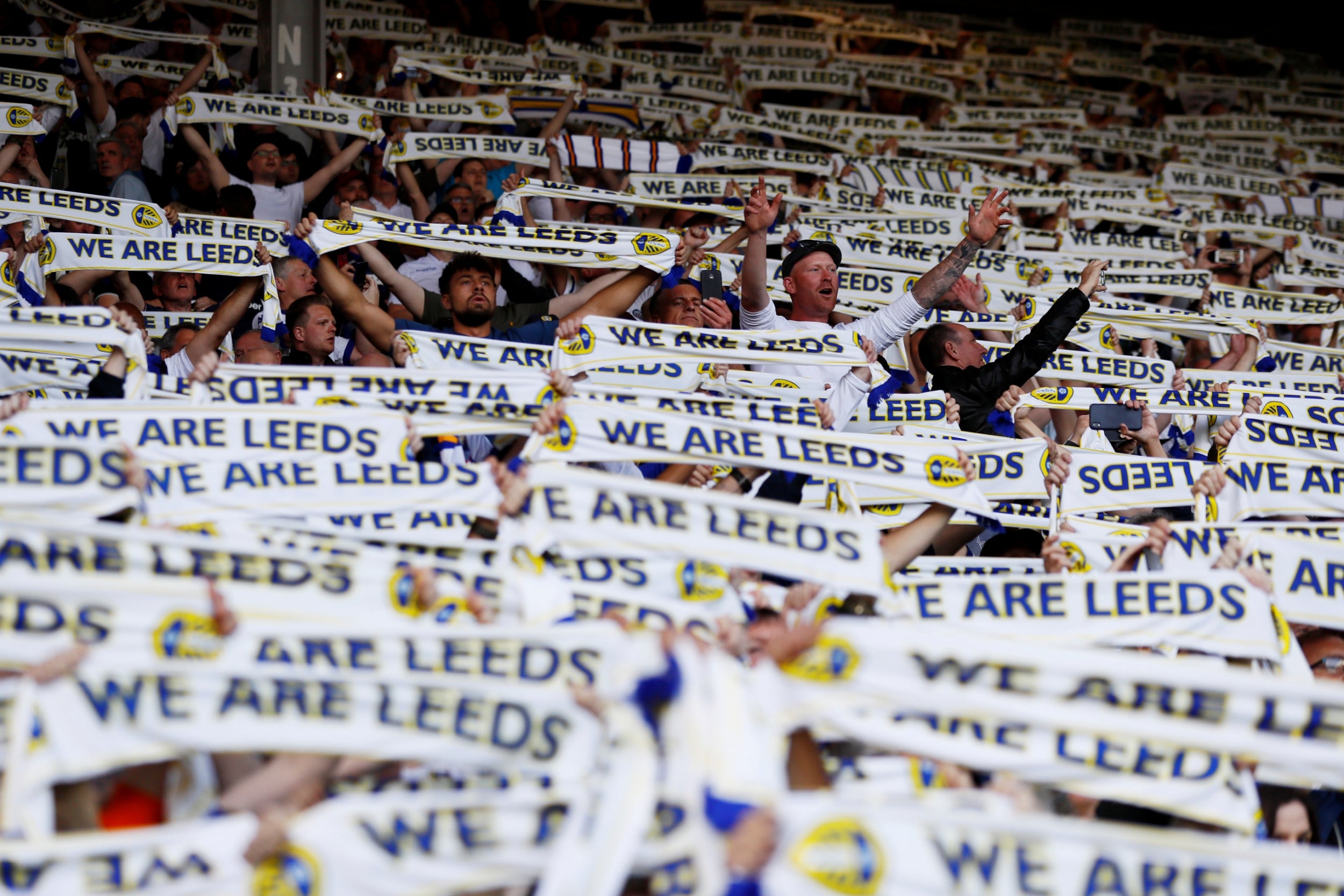 Leeds fans provided excellent support for their players, but it ultimately wasn’t enough

Despite a frantic start to proceedings, the visitors were a goal behind after 25 minutes. Kalvin Phillips’ sumptuous free-kick delivery inadvertently teed up an unmarked Stuart Dallas to double their aggregate lead with a rebound, moments after defender Richard Keogh’s missed clearance saw him watch on helplessly as the cross cannoned off Kelle Roos’ far post.

Their lead could’ve doubled, if not for the woodwork denying Mateusz Klich’s deflected strike from distance. It swerved and took a wicked ricochet off Keogh – but that wasn’t to be the final twist in the first-half alone.

Before a twist arrives with half-time lurking

Duane Holmes was replaced late on for striker Jack Marriott and just 33 seconds after being introduced, he levelled the scoring with his first touch. It was a horrible mistake from Leeds’ perspective, but neither Marriott nor his teammates were complaining. 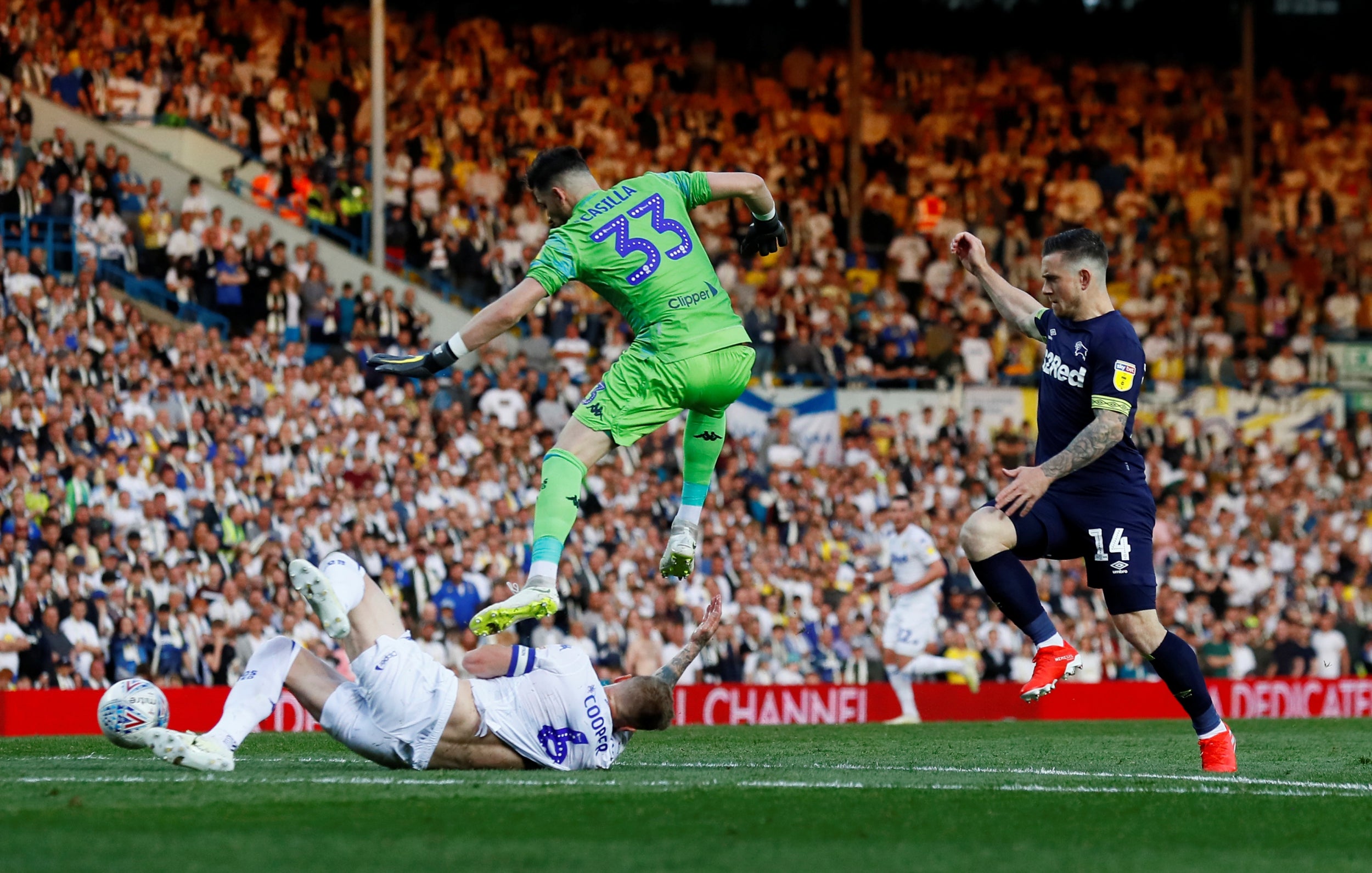 Marriott’s pressing forced Leeds into a horror mistake at the back between Casilla and his defensive teammates… (Picture source: Getty Images)

His tireless pressing from the front proved too hot to handle for an onrushing Kiko Casilla, despite captain Liam Cooper clearly shaping to clear his lines in a dangerous position. The pair almost collided, the ball broke free and with the goal gaping at his mercy, Marriott made no mistake.

It was his first goal since January 5 against Southampton in the FA Cup and given the circumstances, he certainly picked the right time to draw fresh hope for Derby just before half-time.

Within a minute of the restart, Derby took the lead through Mason Mount. Elland Road fell silent.

It was a deft finish by the talented midfielder, on-loan from Chelsea. He showed great agility and composure to beat his man before striking beyond Casilla, while falling to ground mid-strike. He revealed post-match that the goal itself was “lucky” but even while grinning madly, you could tell it was anything but.

After combining well with Jayden Bogle down the right, the 20-year-old probably should’ve doubled their lead – but saw his next effort beaten away by the vulnerable Casilla. Leeds were reeling. Their purposeful start, powered by Jamie Shackleton and Dallas, had seemingly evaded them. Things then went from bad to worse.

Pablo Hernandez came close twice in successive minutes down the other end, before the hosts’ backline was split by another piercing through ball. Mason Bennett’s give-and-go exchange with Tom Lawrence would have come off, if not for a cynical but nonetheless silly challenge by Cooper.

He deliberately held Bennett to stop the run and referee Anthony Taylor had no hesitation in pointing to the spot. Harry Wilson, who had a disappointing game up to that point, duly stepped up and made no mistake – sending Casilla the wrong way to give them a 3-2 aggregate lead.

Bennett was replaced for Tom Huddlestone on the hour mark, though this game was still far from over. Dallas completed his brace to level the scores again – with an excellent solo run and finish into the bottom corner. It was the type of goal made to look much easier than it actually was, the degree of difficulty didn’t faze him – darting beyond a pair of challenges along the way.

Despite a suggestion of offside when the ball was played into Dallas, the goal was given – no VAR meant the visitors felt hard done by, but it wouldn’t last long. Luke Ayling came close with two efforts as Leeds were suddenly rejuvenated, before Gaetano Berardi’s poor challenge saw the Swiss defender sent off for a second booking with time ticking down. 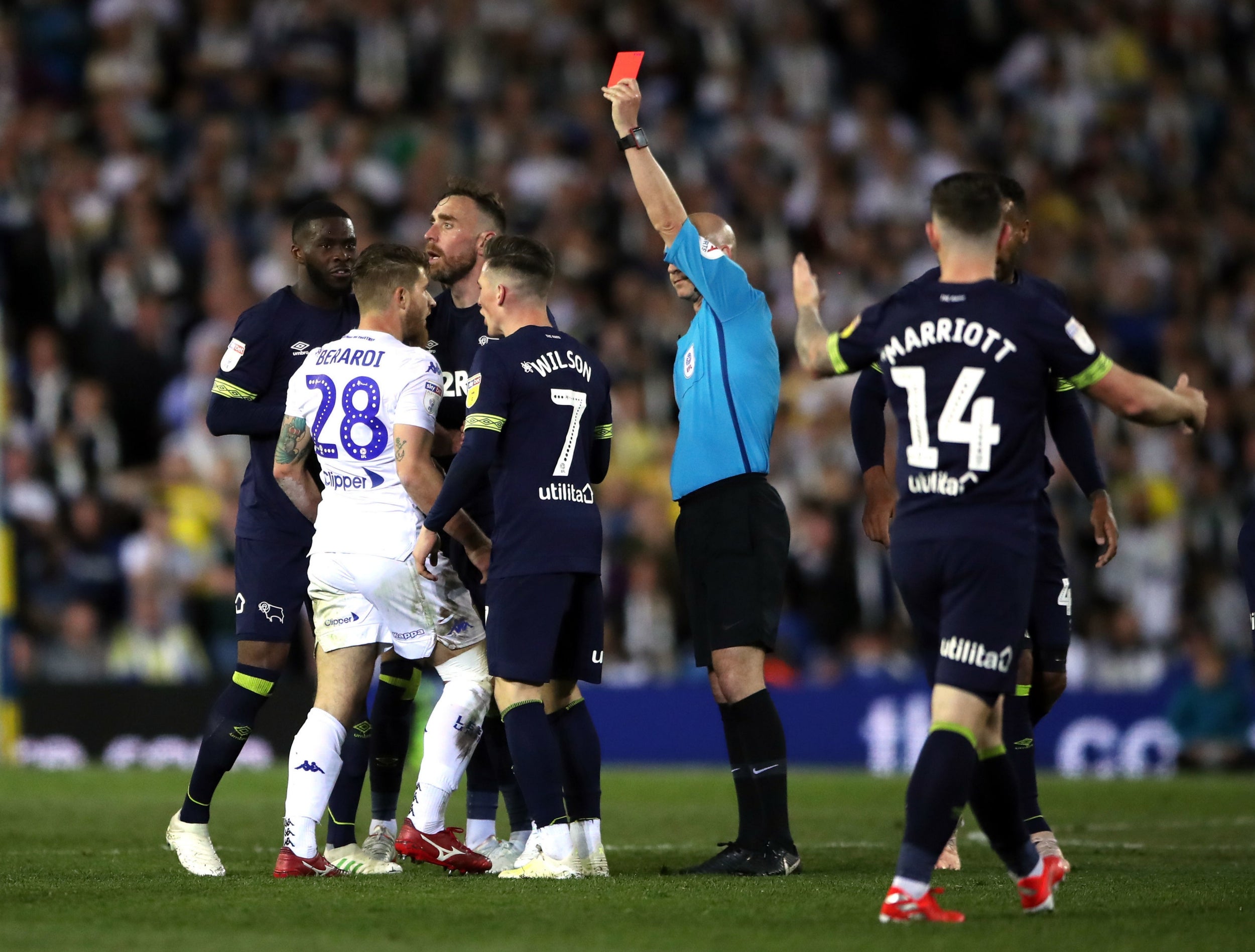 Berardi (no.28) is given his marching orders after a second bookable offence for a needless sliding challenge. (Picture source: PA)

Wilson hit the post from close-range with Derby utilising their numerical advantage, though his miss didn’t prove costly. Instead, Marriott added his second with a composed finish to deliver the killer blow just a minute later, seeing Derby retake a slender aggregate lead on the night.

Keogh, partly at fault in the build-up to Leeds’ first goal, made amends with a lung-busting venture forward. Teed up by Mount, he played a good pass into Marriott’s path and with an onrushing Casilla out to meet him, the 24-year-old made no mistake – dinking over him and into the bottom corner. 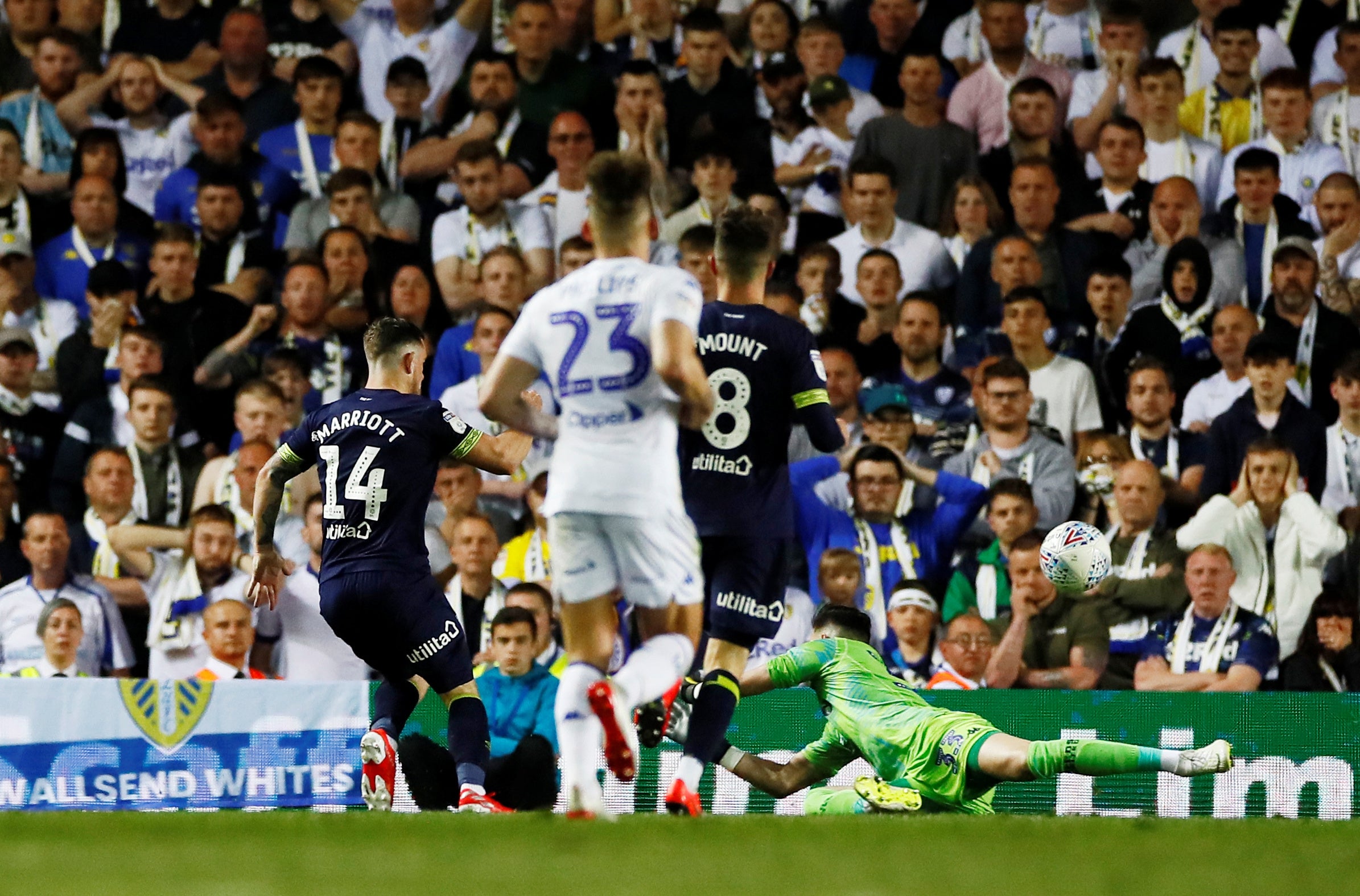 Marriott made no mistake with a deft chip to end Leeds’ playoff hopes late on. (Picture source: Action Images via Reuters)

Jack Clarke and Isaiah Brown came on for the final few minutes, but Bielsa’s alterations proved futile. Left-back Scott Malone was given his marching orders after a second booking and Ashley Cole made a stoppage-time cameo for the visitors as Derby held firm for a famous victory in a memorable playoff match – certainly one of the best, most entertaining in recent seasons.

Lampard, the coaching staff and players were celebrating with their travelling supporters at full-time: you could see just how much it meant to them. But as he and a few players stressed in their post-match interviews, they were the underdogs going into the second leg and have to do it all again against a strong Aston Villa side at Wembley before they can plan ahead for the Premier League next season.

Nonetheless, there are exciting times ahead and this was the perfect advert for Championship football – both teams going at it, being played at a relentless pace.