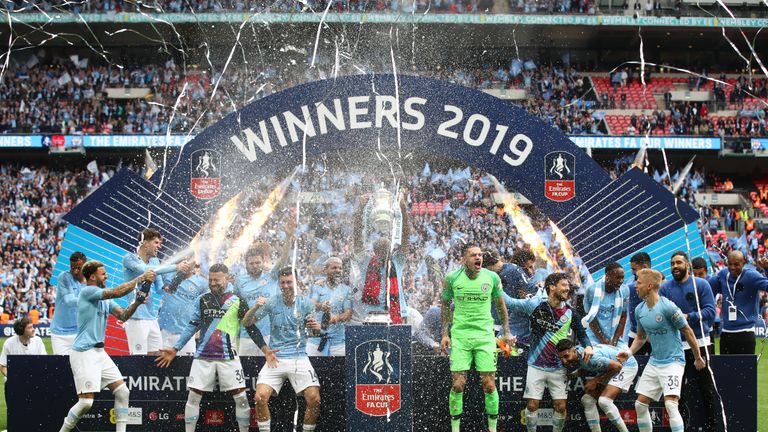 Goals from David Silva, Kevin de Bruyne and a brace for both Gabriel Jesus and Raheem Sterling helped Manchester City clinch a record domestic treble with an emphatic 6-0 win over a spirited Watford effort, securing this season’s FA Cup trophy at Wembley.

For all of Watford’s achievements this season, they were rightly the heavy underdogs for this year’s FA Cup Final. They ultimately came unstuck against a far superior City side, who were both confident and ruthless despite a slow start at Wembley – though Javi Gracia’s men only have themselves to blame.

Craig Cathcart made two goal-saving interceptions in the first ten minutes as Riyad Mahrez and Bernardo Silva relished cutting the Hornets open down the right-hand side. Jesus, a surprise starter ahead of Sergio Aguero, lurked dangerously in the box and remained patient as the Citizens continued to probe.

However, the best chance in the early going fell to Roberto Pereyra. Oleksandr Zinchenko’s misplaced pass was pounced upon and after Gerard Deulofeu’s clever pass, Pereyra was denied from close-range on the counter-attack by the outstretched leg of Ederson. The goal was gaping at his mercy and the Argentine, who hasn’t scored since Boxing Day, fluffed his lines with the pressure at its highest.

City were rightly flustered by Watford’s counter-attacking success, but eventually their pressure told and they netted two goals before half-time to settle their nerves. Zinchenko’s devilish passes were threatening, while Mahrez continued to leave Jose Holebas chasing shadows in one-on-one duels.

However, it was Sterling and David Silva combined to break the deadlock after 23 minutes. He shrugged off the attentions of Adrian Mariappa to win an aerial duel and head the ball towards Silva, who slammed low and hard into the bottom corner.

In the build-up, we saw the best and worst of Abdoulaye Doucoure. He lost possession after being swarmed by City players in midfield, just seconds after unleashing an excellent pass towards Deulofeu from his own half. An alert Ederson reacted quickly to stop the attack in its tracks, which proved pivotal as seconds later City were wheeling away to celebrate taking the lead.

Silva, usually the playmaker, showed steely composure to convert – having gone 27 games without a goal before this fixture. Mariappa made a goal-saving tackle to deny Jesus at the last second after Ilkay Gundogan’s deft pass with Bernardo also lurking close-by. But again their defence was split just five minutes later, as Bernardo turned creator to deliver an inch-perfect chance for Jesus at Heurelho Gomes’ near post. He flicked it across goal with his first touch and although it trickled over the line, Sterling was there to ensure it was a goal – though it correctly was ruled as the Brazilian’s strike.

Mahrez almost made it three before the break after leaving Holebas in his wake once more, as City began to flex their muscles in midfield and were enjoying the game more. Watford, after an encouraging 20-minute spell, were wavering – not least with Gundogan’s all-action midfield display, winning loose balls, duels and recoveries everywhere demoralising them.

As if that wasn’t enough, City started the second-half in similar fashion. Jesus was thwarted by his compatriot at the near post after a brilliant individual run from their own half by Sterling, before Zinchenko had a headed finish correctly ruled out as offside from an inswinging free-kick the following minute. Mahrez made way for Kevin de Bruyne after 55 minutes and if the game wasn’t already over by this point, the Belgian was hungry to kill off the Hornets’ faint hopes.

de Bruyne did precisely that. Less than five minutes after being introduced, he added City’s third from close-range after some sloppy defending and quick reactions from Jesus to win a duel, counter-attack at speed before teeing up the midfielder.

The pair combined once more, this time with Jesus applying the finishing touch to complete his brace – patience a virtue as he slotted through Gomes’ legs, before Sterling got in on the act.

He made it five and six before full-time with close-range strikes after probing passes into his path by Bernardo and de Bruyne, against a Watford side who were simply overwhelmed by City’s attacking prowess and were punished on the counter to devastating effect.

They will certainly be ruing their missed chances at a time when City hadn’t truly settled into proceedings, but only have themselves to blame and there’s no shame in being beaten by the league champions – although the scoreline itself doesn’t flatter them, it’s a result of their gung-ho approach to try and get back into the game with a two-goal deficit to overturn at half-time.

Watford have a decent core of players – Doucoure, Hughes, Chalobah, Deulofeu, Deeney/Gray partnership in attack – but if they’re to reach the next level and really push for the highly-coveted seventh spot, they must be more consistent and invest wisely in the transfer market.

They have failed to really build after Richarlison’s departure last term and the fact he left for Everton, who finished three points off Wolves in the Europa League spot, speaks volumes for how players perceive the Hornets in the bigger picture.

City meanwhile, have completed a record-breaking domestic treble and done so despite all their issues this season – injuries have forced their squad depth to be tested, while a record 169 goals in 61 games this season is another in a long list of impressive achievements.

They will look back with a twinge of disappointment at failing to secure the quadruple, having lost to Champions League finalists Tottenham in the quarter-finals, but it’ll fuel them forward with added motivation to finally break their European hoodoo in 2019/20.