After all of the pre-fight animosity between the pair, pledges and promises from both, Wilder picked Breazeale apart and finished him in brutal fashion before the first round had even been concluded – retaining his WBC heavyweight title with worrying ease.

Well, so much for that then. After weeks of trash talk, the insistence that Wilder would regret underestimating him and the bad blood between the duo, Breazeale was sent crashing to the canvas with no reply just two minutes into the very first round.

It was precisely the type of powerful, scary display from a world champion full of confidence – while edging ever closer to his ultimate goal. He has consistently stressed his desire for the glamour fights, a Tyson Fury rematch and the big one with three-belt world champion Anthony Joshua: performances like these make it increasingly hard to argue against that.

Breazeale fought Joshua in 2016 and AJ inflicted the first defeat of the American’s career with a seventh-round knockout at Wembley. Three years on and a three-fight win streak to his credit, this was a golden opportunity to shock his critics, make a statement and throw a curveball into the heavyweight mix at championship level.

Instead, he tasted defeat again and it was far more ruthless. Almost as if deep down he knew that his efforts would prove futile, there was a sense of foreshadowing after Wilder clipped him with a few good combinations and kept pressing the issue.

He only really hurt Wilder when he himself was in the corner and given the bout’s brief nature, it was more a last-ditch effort to force Deontay back – prompting those warning signs that suggested Breazeale was game for a real scrap.

Unfazed, Wilder backed off and took a few seconds to regain his composure before pushing the pace once more. Breazeale had no answer and the distinct lack of head movement stuck out like a sore thumb: Wilder would enjoy picking him apart.

A devastating right hand strike landed flush and Breazeale fell to the canvas. He didn’t know what hit him. Wilder revealed post-fight that he didn’t, either. The ferocity and sheer hand speed caught him sweetly and despite referee Harvey Dock’s futile ten count, everyone inside the Barclays Center reacted in disbelief. This was well and truly over before it had a chance to marinate. 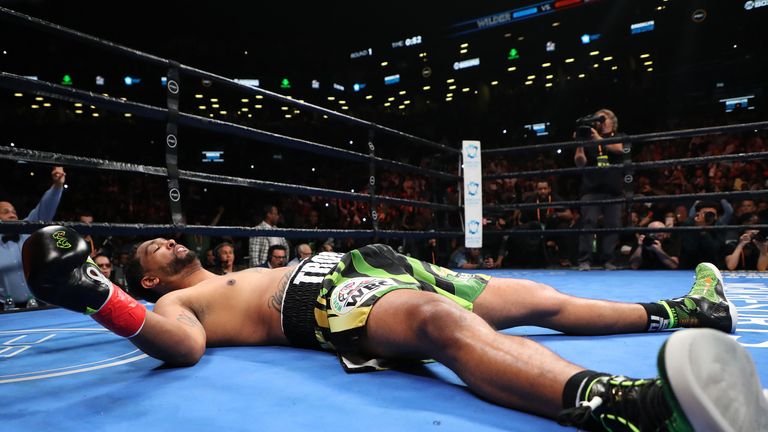 Dominic Breazeale lies on the canvas, helpless after being knocked out in the first-round by Wilder. (Picture source: Sky Sports)

The victory sees Wilder extend his undefeated record to 41 wins with his 40th knockout and ninth successful title defence.

“The power is real, it’s something I don’t have to really train for. I think it [those big fights] will happen, it’s going to – I believe in all my heart it will.”

Wilder was approached by Cuba’s Luis Ortiz in the ring after his victory and when interviewed, the 38-year-old revealed he’d be more than happy to engage in a rematch, leaving the ball firmly in the American’s court.

“All parties involved are talking. There’s too many people and opinions involved – it will take our teams to sit down, handle things, squash everything and get it done for the fans.

The big fights will happen the way we all benefit – we risk our lives in here, so let us get our time to iron out our differences and you guys will know when it happens. All good things come to those who wait!”

Questions will and should be asked of Breazeale, who has managed to seemingly worsen as a boxer since his title fight against Joshua – despite having Virgil Hunter in his coaching circle.

His lack of head movement made him a sitting duck and at 33, it’s hard to see him get another opportunity among the big boys again after this.

After all that talk of an AJ rematch when, not if, he beat Wilder, he’s managed to embarrass himself with a grim performance. It’s not as though Deontay was spectacular, he picked his shots well but essentially smelled blood and pounced. 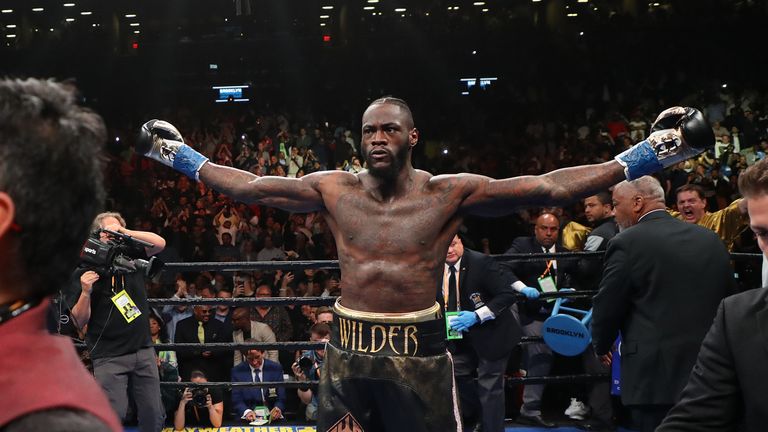 Wilder said he “hyper-extended” his arm mid-round but was more than willing to continue with any niggling injuries if the fight had continued. His team are already planning their next opponent, that could be revealed in the coming weeks should negotiations go well.

When analysing his knockout win, he told Showtime that Breazeale’s body language, lack of head movement and slow movement were all signs he should intensify his strikes – ultimately paying off with a typically ruthless win. All eyes are now on Joshua, as he faces Andy Ruiz Jr on June 1 – before Tyson Fury’s fight with Tom Schwarz two weeks later.