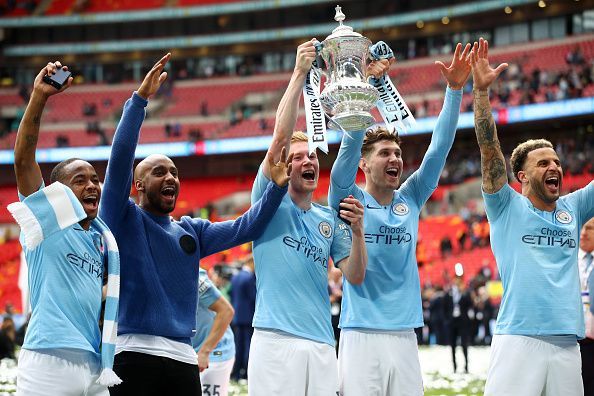 Manchester City completed a record-breaking domestic treble with a thumping 6-0 win over Watford at Wembley, but what were five talking points from their latest trophy-clinching victory?

Goals from David Silva, Kevin de Bruyne and two apiece for Gabriel Jesus and Raheem Sterling helped Manchester City clinch a record domestic treble with an emphatic 6-0 win over a spirited Watford side to secure this season’s FA Cup at Wembley.

Despite their dominant scoreline, the Hornets were threatening in an eventful first-half – where Roberto Pereyra missed a great chance to break the deadlock and Abdoulaye Doucoure had a penalty appeal waved away by referee Kevin Friend.

With a two-goal deficit to overturn at the interval, Watford committed more players forward and were clearly eager to cause more problems for Pep Guardiola’s men to ponder. de Bruyne’s introduction just before the hour mark was the catalyst though as the Citizens turned on the style and were ruthless in their pursuit of further goals.

City, who retained their Premier League title with a 3-1 win away at Brighton last weekend, finish the season on a high – while the result also means seventh-placed Wolves have qualified for Europa League competition in 2019/20. With all of that in mind, here’s a look at five talking points from a memorable evening for both sides in different ways: 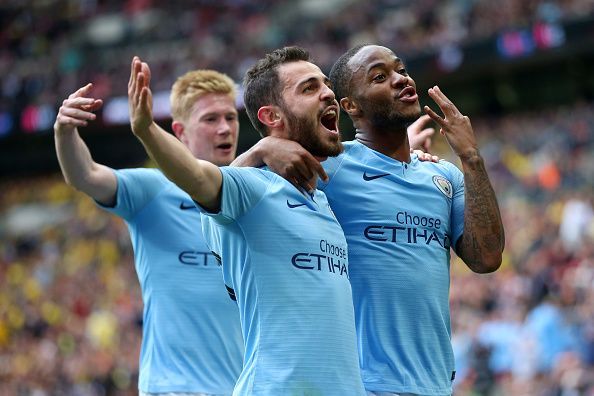 (L-R: de Bruyne, Bernardo Silva and Sterling celebrate as City cruised to a 6-0 win over Watford

Raheem Sterling has been vocal about Wembley and how much it means to him to be successful there, not least given his childhood and the fact he grew up just minutes away from the illustrious stadium.

He was inches away from becoming only the fourth player to score an FA Cup Final hat-trick and despite not performing at his electric best, he scored a brace while creating their all-important opener for David Silva.

It was his clever headed pass, having out-jumped Adrian Mariappa, which proved pivotal as Silva broke the deadlock from close-range – though the Englishman was characteristically hungry for more. There’s no limit to his potential and I’m sure Pep would have told him the same post-match, aware that there are still improvements to be made within his game.

de Bruyne has been sidelined for large periods this season and this campaign has been a frustrating one for him on a personal level. However, he has importantly shown his class when called upon and continues to prove why he’s their best player: this time an inspired display from the substitutes’ bench where he earned the Man of the Match award with a goal and assist, three key passes and 100% pass accuracy.

Dragging the Watford backline both left and right, they couldn’t handle him and post-match you could tell just how determined he has been to put his injury struggles behind him – after five injuries in less than a year following Belgium’s third-place finish at last summer’s World Cup, he wanted to prove he’s “still got it” and will be hoping for more fortune as they’ve got lofty ambitions once again next season. 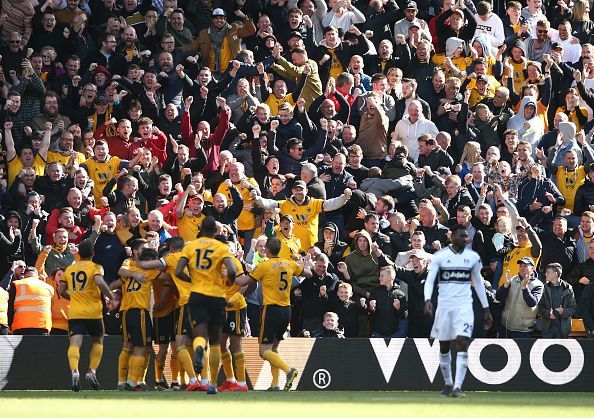 Watford’s defeat here means that Wolves will be in the 2019/20 Europa League, which is a remarkable achievement for a newly-promoted side – regardless of how much they’ve invested. You only have to look at Fulham’s demise after also getting promoted last term to see that spending mass sums of money doesn’t always guarantee success, so credit must be given to Nuno Espirito Santo and his players.

Making Molineux a fortress, they were excellent against the league’s top sides and despite inconsistent results against some of the division’s weaker teams, they picked up their form when it was needed most and earned enough points to pip Everton, Leicester, West Ham and Watford to seventh place.

Their squad depth and quality will be tested as they’ll only have roughly six weeks off before playing in the qualifying rounds. Balancing the competitions well and squad rotation is key to success, so it’s imperative they learn from the mistakes that have plagued both West Ham and Burnley in recent seasons.

If possible, they must avoid selling many, if at all any, of their key players – Rui Patricio, Matt Doherty, Leander Dendoncker, Joao Moutinho, Ruben Neves and Diogo Jota all form part of the club’s core while Raul Jimenez will be looking to continue his goalscoring exploits after agreeing a permanent deal earlier this year.

Meanwhile, this result and the season they’ve had just shows Watford have a lot of work to do if they want to reach that level. Failing to properly invest after the sale of Richarlison last summer has proven costly, while their two best acquisitions – a subdued Deulofeu and gracious Ben Foster who watched on at Wembley. 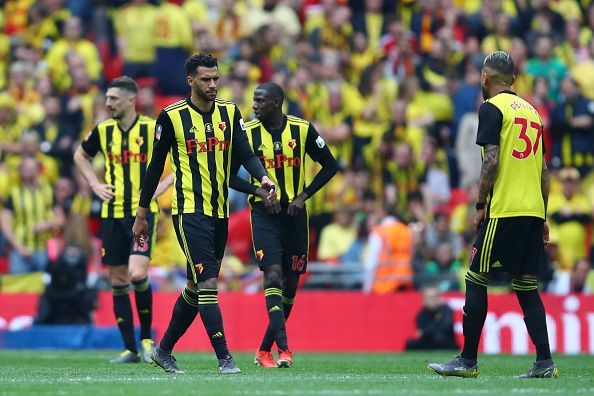 Pereyra (far right) missed a great opportunity at 0-0 to give Watford the lead, which led to their downfall

It was an excellent stop by the outstretched Ederson but ultimately still a big chance squandered by Pereyra, who had a variety of goalscoring options and chose the wrong one. Had he dinked the ball or finessed it toward the far corner, Watford would’ve gone a goal up after 10 minutes and it’s a completely different game.

Instead though, it’s a moment he’ll be repeatedly replaying over in his mind as his team were thumped by the league champions – ruthlessly punished for their mistakes and lack of a clinical touch when it mattered most.

In a real David vs Goliath clash, Watford knew if they wanted to spring an upset, they had to take their chances. They failed to convert those opportunities and despite creative flashes, this was another disappointing display by the Argentine which has rather typified his spell at Vicarage Road since a £10.4m move from Juventus three years ago.

His defensive capabilities have rightly come under question and in the build-up, he was at fault for at least one of City’s second-half strikes. It was frustrating to watch and despite Watford’s encouraging start, they didn’t even manage a goal to show for their efforts. He hasn’t scored a goal since Boxing Day and fell short of expectations once more when the pressure was at its peak. The word frustrating doesn’t quite do it justice.

#2 Gabriel Jesus proves he can fill the Aguero void 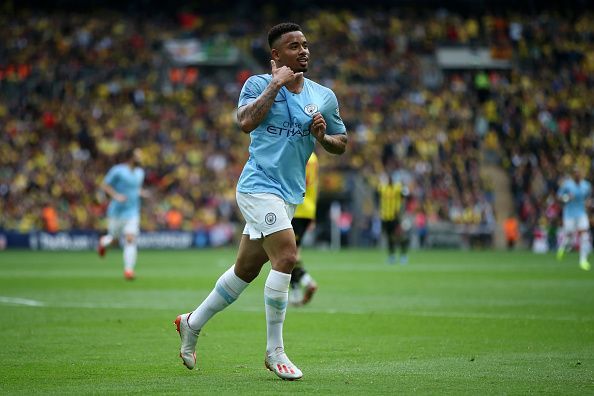 Jesus wheels away to celebrate his second strike of the evening against Watford, repaying Pep’s faith

When the team news was announced, it was slightly surprising to see Jesus preferred to Sergio Aguero in attack for City, but shouldn’t have been. He has netted 21 goals and created six more in 47 games this season (all comps), despite starting less than half of those (eight in the league) during that same spell.

Sergio Aguero is a world-class forward and still one of the best, but isn’t getting any younger. He turns 31 next month and although healthy competition is good, perhaps it’s time to grant Jesus more opportunities after all.

His goal record is impressive despite not playing regularly, though you could be excused for thinking it’d take him time to settle into the game after 20 minutes. Watford defended well in the early exchanges but after finally getting the breakthrough, Jesus ensured he was in on the act before long.

Bernardo Silva’s excellent through ball was converted after a cushioned touch at the back post saw the ball trickling goalwards beyond an onrushing Heurelho Gomes.

As for the Brazilian’s second, it was a composed finish after combining well with de Bruyne on the counter. He ultimately made the Hornets’ sloppy backline pay for failing to pick him up and after recent comments suggested he should leave City, it’s important that Pep subconsciously tells Jesus that his future lies in Manchester.

Raring to go and more than capable, it’s certainly a selection headache for Pep to ponder ahead of next season, not least with dominant display like that one. 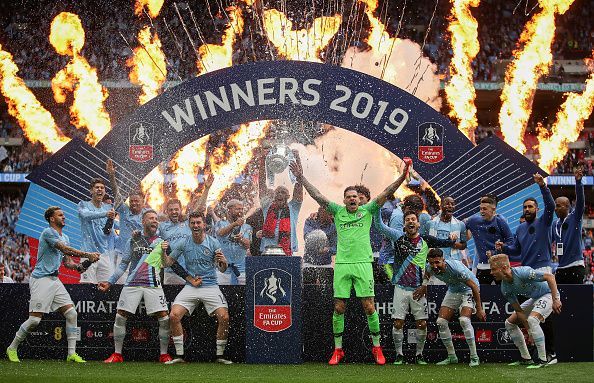 City became the first male team to win the domestic treble in England – the Premier League, League Cup and FA Cup in a single season. That is certainly impressive, though players will be quietly frustrated within as this campaign presented a great opportunity for them to clinch a record-breaking quadruple.

Bayern Munich, Real Madrid and PSG were poor, Juventus inconsistent and Barcelona over-reliant on Lionel Messi. Whether it’s harsh or not, the Champions League was there for the taking and although the title race was closer than it has been in recent years, they were widely expected to retain their crown too.

Winning cup competitions is nice and naturally, some critics will nitpick the quality of opposition they’ve faced but even given their strength in depth, it’s a difficult achievement to conquer and they rightly should be proud of their efforts this term. There’s a reason why no other side has managed it because it’s much more difficult than it seems to balance all those competitions at once.

However on June 1, they’ll be wondering what if those individual mistakes hadn’t cost them the quarter-final against Tottenham: Aguero’s missed penalty, Laporte’s two costly errors, Llorente’s dubious goal and much more besides. Pep was ultimately brought in to secure the Champions League and yet Spurs, who have been inconsistent all season, have a great chance to win their first. Liverpool, their closest league rivals, have a golden opportunity to add to their five titles.

So for all their dominance and quality in abundance, the big one still eludes them and you could see some players had a twinge of regret, they knew they were missing one more: there’s still work to be done and it’ll be interesting to see what happens over the summer.