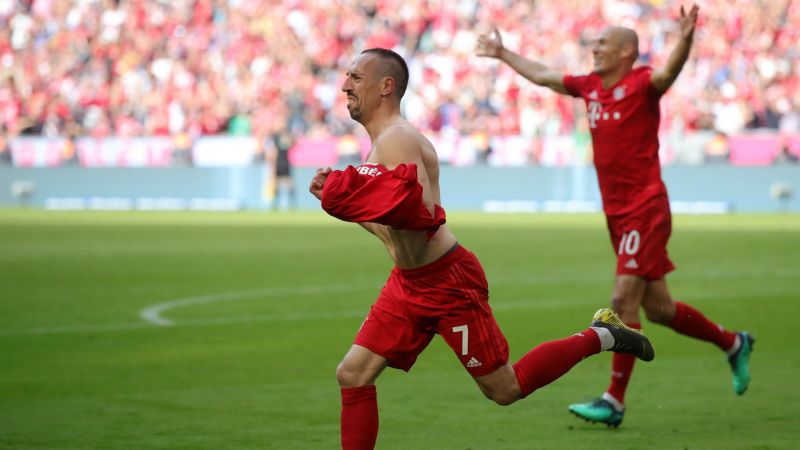 It was a fitting end to illustrious careers at Bayern for creative duo Franck Ribery and Arjen Robben, who bid farewell with a 5-1 win over Eintracht Frankfurt yesterday – securing their seventh successive Bundesliga title while doing so.

Departing Bayern Munich stars Ribery and Robben were in celebratory mood after saying farewell to the Allianz Arena with an emphatic league victory on the final day of this Bundesliga campaign.

Despite Borussia Dortmund’s promising lead atop the standings for much of the season, Niko Kovac’s men picked up consistency after the Christmas break and managed to usurp them once more – though needed to avoid a final day defeat by travelling Frankfurt to seal their fate.

Both wingers are set to leave Bayern with their contracts set to expire and it proved fitting that the pair, who have shaped the club’s identity over the past decade, both got on the scoresheet off the substitutes’ bench.

After 12 years and nine Bundesliga trophies, Ribery was thankful – not least after his family had travelled from France to watch a memorable final home appearance.

“My whole family: my kids, wife, parents, wife’s parents and my cousins have come from France for this special moment. It was hard but the main thing is we’re champions. It’s my last great moment here at the Allianz with my colleagues and the fans.”

“It’s not as if I’ve been here two or three years, I’ve been a Bayern player for 12. I’ve had many great moments here but my best season was 2013 – what we achieved then was incredible.”

Robben, 35, joined the Bavarians back in 2009 for £22.5m from Real Madrid and despite persistent injury struggles (calf, thigh, knee, abductor) of late, echoed similar feelings post-match.

“Many emotions run through your body after a match like this, you can’t put it into words. It’s something you have to experience yourself. But the best thing is that many lads who played with me were here today – I fought for my comeback for five months and this was the reward.”

Bayern are set to face RB Leipzig in next weekend’s DFB-Pokal final, their final action of the 2018/19 campaign.

Ribery revealed earlier this month that he still wants to continue playing for one or two more years, but remains undecided about his next destination. Robben meanwhile, has already admitted retirement is an option – though also wants to think carefully before making his next career move. Injuries have plagued both, moreso Robben, so it’s understandable he might want to finish on a high.