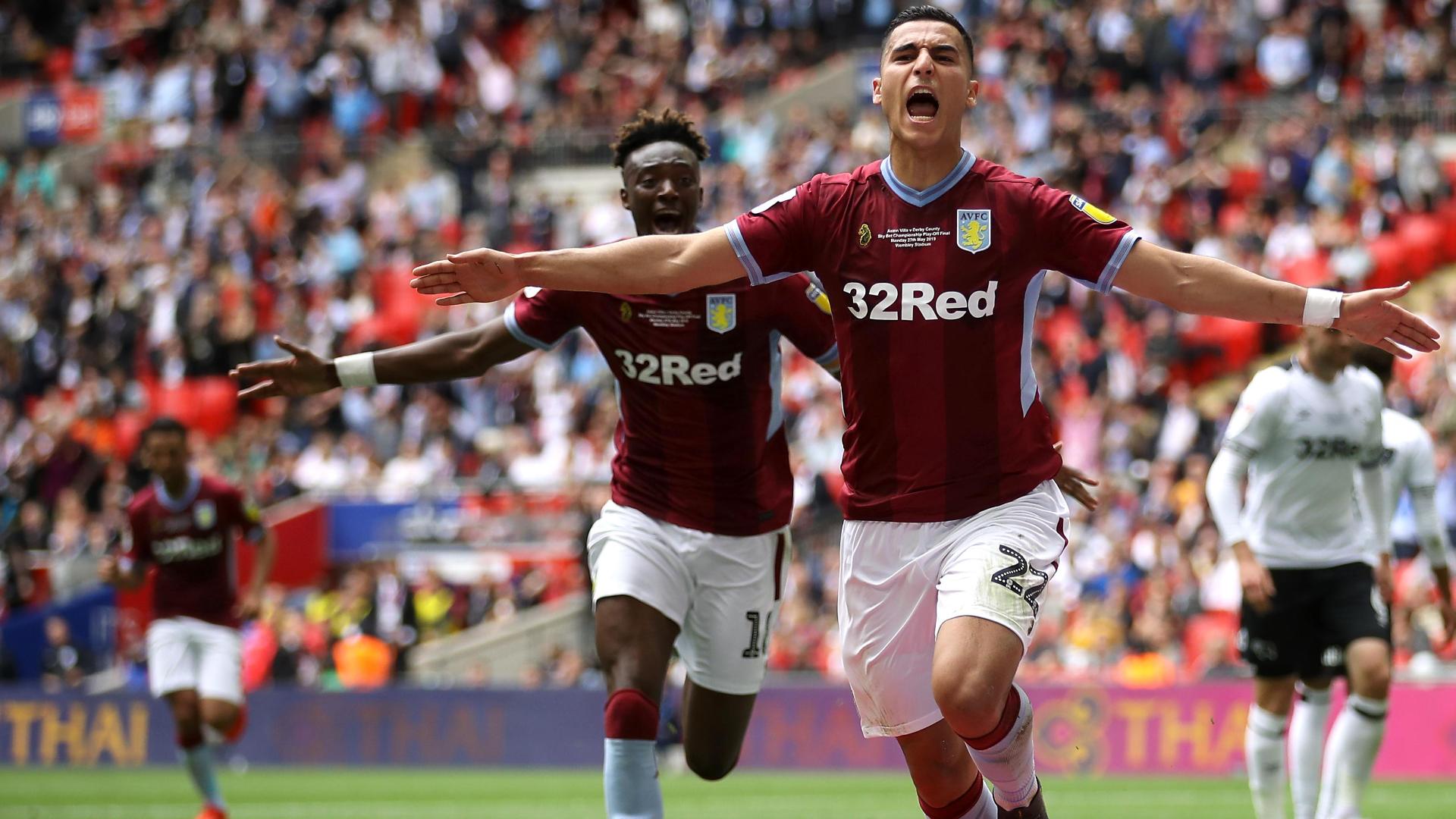 After playoff final heartbreak twelve months ago against Fulham, the Villains earned their redemption in frantic circumstances against a spirited Derby side – who just weren’t good enough on the afternoon.

Both sides endured dramatic victories in the semi-finals against West Brom and Leeds respectively, but given last year’s frustrations, it was the more experienced Villa who started brighter in this one.

Jack Grealish’s inviting corner deliveries caused mayhem in the Derby box, as the midfield pairing of Tom Huddlestone and Bradley Johnson were unable to clear their lines.

Axel Tuanzebe, on-loan from Manchester United, was presented with a golden opportunity to break the deadlock from their collective error after four minutes – but miskicked the ball and their blushes were spared.

Goalkeeper Kelle Roos had a miskick of his own and gifted Villa another chance two minutes later, but Grealish’s strike from distance flew over the crossbar. Nonetheless, the warning signs were there. Derby striker Mason Bennett, making his first successive start since October, did his utmost to cause havoc at the other end – his pace and direct playing style threatened.

But it was the work of El Ghazi which put Dean Smith’s side in the ascendancy. His excellent solo run, eventually thwarted by Richard Keogh’s last-ditch sliding tackle, gave their forward players another timely reminder they were on top and needed to take advantage. McGinn fired wide from distance, while you could sense Derby were gradually beginning to settle more on the ball without the final ball their possession needed.

Then on the half-hour mark, the tide appeared to turn. Tyrone Mings and McGinn made important interceptions in quick succession to repel Derby as they intensified their attacking pressure, before a visibly frustrated Tammy Abraham had his first chance of the goal.

Having weaved beyond Keogh and Chelsea teammate Fikayo Tomori into the box, he watched his strike as it curled narrowly over the top corner. Derby’s backline were caught ball-watching and again the tide had shifted.

Tammy, who scored 25 Championship goals this term, knew they were there for the taking. His teammates’ inability to feed him chances saw the 21-year-old increasingly agitated, but that was another unwelcome sight from Frank Lampard’s perspective.

El Ghazi was almost toying with Derby’s backline at times, but his indecisiveness in the final third saw a promising opportunity go to waste – before Grealish did the same a few minutes later.

El Ghazi was constantly pulling the strings down the left and Derby players struggled to contend with him. (Picture source: Derby Telegraph)

Mason Mount, who hadn’t really got on the ball enough, registered Derby’s first shot on target with a strike from distance which Jed Steer comfortably dealt with. Keogh headed over the crossbar from a rare Derby corner, before the deadlock was finally broken on the stroke of half-time.

Jayden Bogle, one of Derby’s best performers this term, was caught flat-footed and duly punished. Ahmed Elmohamady delivered a teasing cross and El Ghazi evaded the fullback’s attentions lurking from behind to head into the bottom corner, leaving Roos helpless.

Half-time and a goal behind, it was about to get even worse for Derby. Roos, who endured a few shaky moments in the first-half, had another moment to forget after attempting to catch a lofted ball in the box.

Rather than to parry, the 26-year-old Dutchman’s catch wasn’t clean and instead it dropped from his grasp. McGinn was on hand to his left to prod home into an empty net and without warning the game was seemingly over. Both sides made changes, Derby more bold and attacking, to try and respond accordingly. 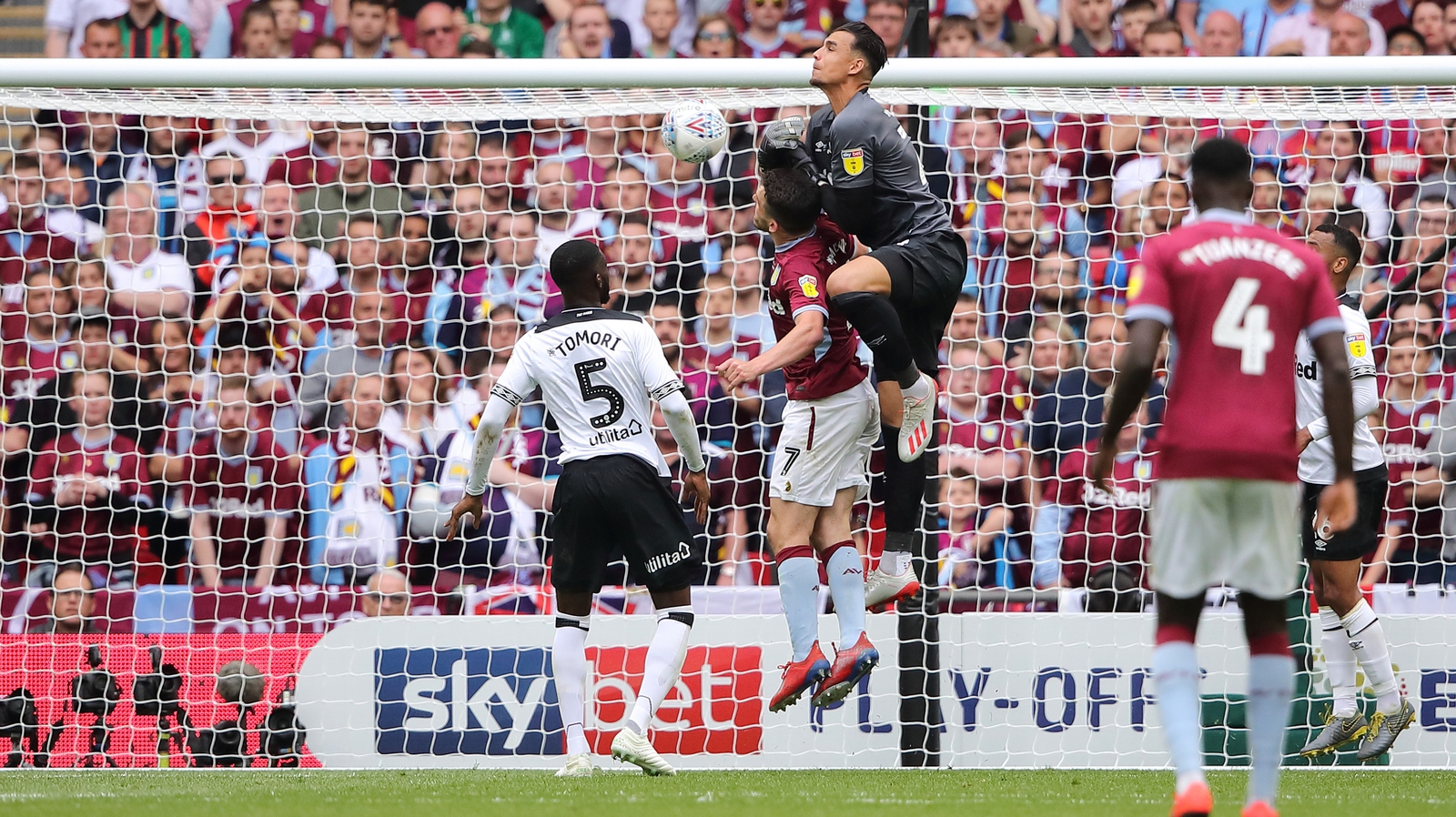 Roos’ decision to catch, rather than punch, cost Derby a killer second goal and they struggled thereafter. (Picture source: RTE)

Jack Marriott, who scored a brace in their semi-final second leg win over Leeds, was introduced. Martin Waghorn and Florian Jozefzoon also came on with Lampard keen to pile on the pressure.

Derby halve the deficit to set up frantic finale

Marriott and Bogle both came narrowly close, but they eventually got their reward with nine minutes to play. Tomori’s searching long ball threaded through Waghorn in the box and as he shaped to shoot, Mings made an excellent sliding recovery tackle – injuring himself in the process.

As he lay clutching his ankle on the turf, Derby played on and scored: Marriott’s goalbound effort taking an acute deflection off Waghorn on the way through into the bottom corner to set up a dramatic finish.

Despite some nervy moments in stoppage-time, Villa held firm to secure their promotion back into the Premier League at the end of an arduous campaign which nearly saw captain Grealish leave with Champions League finalists Tottenham having bids rejected for him.