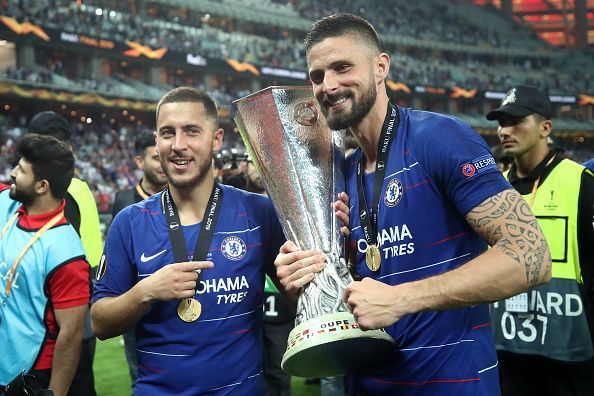 Chelsea earned their second Europa League title in six years at Arsenal’s expense in Baku, but which players excelled while others struggled?

Hazard, widely expected to be joining LaLiga giants Real Madrid in a big-money move this summer, excelled against a wasteful Gunners side – who were easily carved open in transition and duly punished.

If it was his final game for Chelsea, the Belgian leaves on a high: a well-taken brace and assist, as he combined well with fellow goalscorers Pedro and former Arsenal man Giroud.

Alex Iwobi made an immediate impact off the substitutes’ bench, hammering home an excellent volley from distance to provide a glimmer of hope for an unlikely revival, though it proved little more than a consolation as Hazard scored again three minutes later.

The result means Maurizio Sarri’s side are the first team to win a major European competition without losing a game throughout their campaign since Manchester United won the 2007/08 Champions League unbeaten – while Arsenal miss out on a place among Europe’s elite for next season after finishing runners-up.

With all of that in mind, here’s a look at five hits and flops from a memorable but somewhat subdued evening in Azerbaijan: 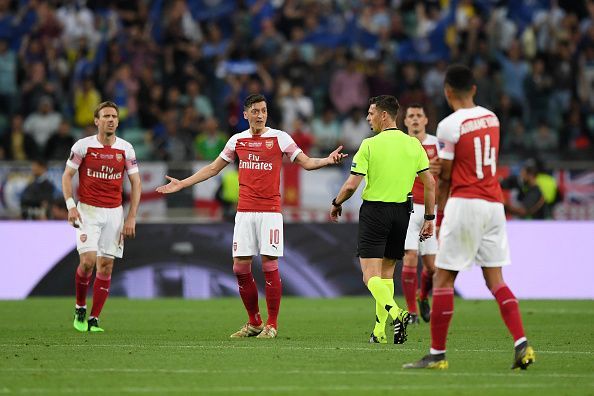 Questions over his suitability within Unai Emery’s plans have been continually asked throughout the campaign, not least with Aaron Ramsey’s impending departure – though the German failed to impress on this occasion.

Granted, he wasn’t given ample opportunities to do so but it says plenty that he was more involved defensively than in the final third, where the 30-year-old can create chances from seemingly nothing and possesses the ability to change games in an instant.

Starved of possession in a constant battle with Jorginho, he was regularly left frustrated by infrequent supporting midfield runners to provide passing options and push Arsenal forward. Being their sole playmaker behind Aubameyang and Lacazette, the onus was on him to set the tempo. He registered only 40 touches of the ball before being replaced after 77 minutes and in truth, he’ll be scapegoated for what was truly a poor collective display.

Despite 89.7% pass accuracy, one key pass and two defensive interventions – he only won two of his eight duels contested, was dispossessed on five separate occasions and overall frustrating to watch. Not great by any means, this type of individual display highlights his flaws in a system that doesn’t suit his strengths. When have we heard that before? 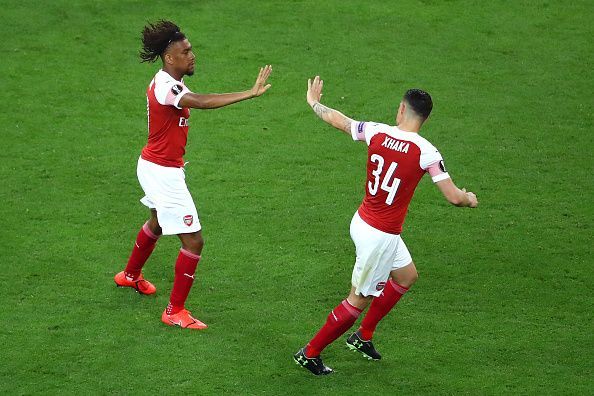 Inconsistent, erratic and just not good enough to feature regularly for Arsenal. It’s something that Alex Iwobi has learned to ignore in recent months despite finding himself often out of the side and truthfully, the 23-year-old attacker stomped his authority on the game admirably.

Replacing Lucas Torreira with just over 20 minutes to play, Chelsea had already found themselves three goals ahead. Iwobi, determined to prove a point and make Emery rue the decision to leave him out of the starting eleven, was excellent.

Direct and deadly in transition, he created their joint game-high (3) key passes and on another day, would’ve had two assists to go with his efforts. Teeing up Lacazette late on as well as Kolasinac with promising opportunities spurned, the Nigerian’s weight of pass and decision-making was razor-sharp.

Ultimately it had no baring on the full-time result, but that’s not his fault either. The question now is whether he can kick on over the summer, continue developing weaknesses and progress – as his display was one of very few bright points from Arsenal’s perspective. 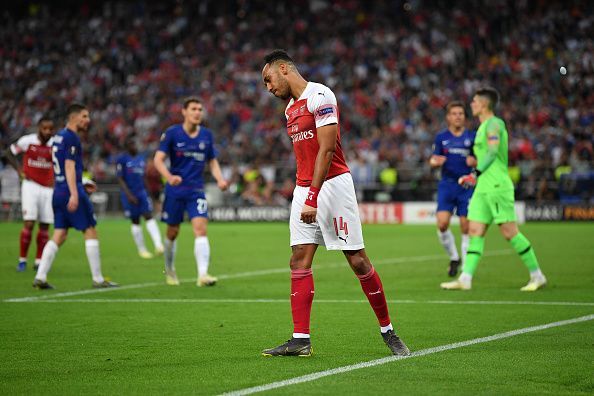 A big game and it was a significant chance missed for Aubameyang, who squandered two great chances – one in both halves – while relinquishing possession cheaply in the build-up to Hazard’s second goal among other forgettable moments on this occasion.

Despite some brief flashes of promising movement in the attacking third, he was disappointing and largely shackled by Andreas Christensen and David Luiz when called upon. Struggling for composure and a clean strike on the ball, all the pre-match focus on his partnership with Lacazette ultimately proved futile as neither was able to carry the creative load against a Chelsea side prepared for the task at hand – thwarting them.

He had a game-high four shots and yet none of them registered on target, which speaks for itself. Only Sead Kolasinac’s 72.1% pass accuracy was worse than his 79.2% for the outfield starters across both sides and he again didn’t offer much else in the way of build-up play.

Losing all four of his duels and failing to connect on four cross attempts, it was a very underwhelming display from the club’s top goalscorer this term. 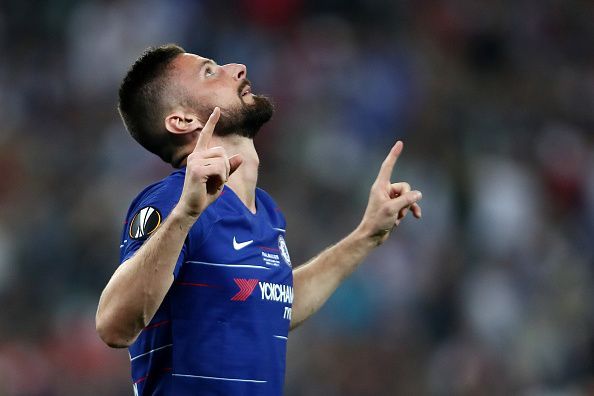 Talk about poetic justice! Giroud, who left Arsenal for pastures new last January after being made surplus to requirements, scored one and set up another against his former club.

Post-match, he revealed his gratitude to Arsenal and how they’d helped him develop his craft which is nice and all, but what else did you expect from the experienced Frenchman? He was tirelessly criticised for lacking a clinical edge in last summer’s World Cup, but he has certainly led the line with precision and combination play alongside Hazard this term.

It’s the type of partnership that Hazard was expecting from both Álvaro Morata and Gonzalo Higuain, but Giroud has relished the role and excelled against a porous Arsenal backline.

Although he should have opened the scoring in the first-half, he made amends with a ruthless effort early after the restart. Timing his diving header to perfection, he caught captain Laurent Koscielny unaware with just how low he was willing to go to head the ball goalwards from Emerson’s teasing delivery.

Petr Cech should’ve shuffled his feet quicker to save it, though it was a classy finish nonetheless and the beginning of the end from Arsenal’s perspective. Something we’ve seen multiple times in England over the years happened:

Giroud involved in intricate link-up play with attacking teammates as they lined up to shoot. With three key passes completed with an 82.6% pass accuracy rate, Olivier certainly haunted his former side. 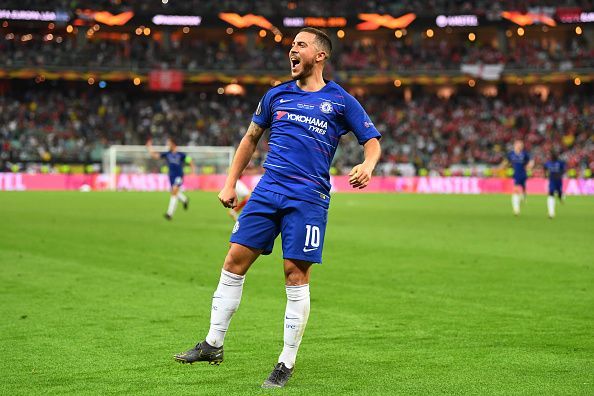 Hazard rules the roost with a commanding display in Baku

Who else but Eden Hazard? On his first European Final appearance – having missed their win over Benfica in 2013 – he relished tormenting Arsenal’s backline and as he often does, appeared doing so with consummate ease gliding across the turf.

Ainsley Maitland-Niles had his work cut out and despite an encouraging first-half showing, he and the rest of Arsenal defensively wilted under Chelsea’s pressure. They didn’t start well but crucially finished strong as they usually tend to do: Hazard as always was their fulcrum in attack and combined well with Giroud once more.

A game-high five key passes, 86.7% pass accuracy and five completed dribbles, his presence alone in the final third proved a nuisance that Arsenal couldn’t handle. His trademark penalty finish, coolly sending Cech the wrong way, before making no mistake from close-range to complete his brace, is the typical Hazard display we’re all used to seeing.

Questions over his consistency are justified, but when you’re carrying a Chelsea side like he has been doing season-after-season, you can’t begrudge him wanting to complete his dream move to Madrid with different expectations and targets to achieve in Spain.

It’s a joy to watch him perform at his best and if not for him, the Blues might not have won – especially not as comprehensively as they did in the end. Two goals, an assist and more silverware to celebrate, he revealed it’s “probably a goodbye” post-match and if so, definitely not a bad way to depart the west Londoners, who cherish him so dearly.