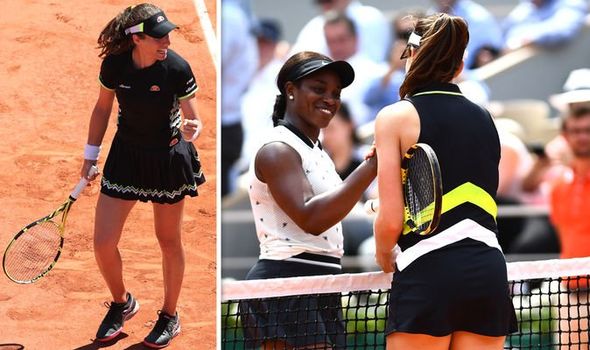 The British number one, seeded 26th, was excellent during her straight-sets win over the American – who looked stunned and struggled for much respite, especially during a punishing first set.

Just like Konta, Vondrousova – who turns 20 later this month – reached the quarter-finals for the first time in her career. Konta will be playing in her third Grand Slam semi-final – on a third different surface – after going deep at the 2016 Australian Open and Wimbledon the following year. Marketa Vondrousova celebrates during her straight-sets win over Martic – she’s yet to drop a set this tournament. (Picture source: DNA India)

Enticing opportunity opens up ahead of Saturday’s final

Despite inconsistency after reaching world number four status, she’ll look to win her first Grand Slam tournament and with an excellent showing in Paris, there’s no reason why that cannot be done.

READ: Konta will be tough to beat, says new coach

She’ll look to surpass Jo Durie, Britain’s last woman to reach the semi-finals 36 years ago, with a place in Saturday’s final up for grabs.

“To play on the new Chatrier court against a top player, at the level I did, I’m really proud of myself. It’s hard to say if it was one of the best matches of my career, but dealing with conditions out here against an opponent like Sloane who can run away with it, I was pleased to get her on the back foot and control points a little bit.”

That’s precisely what she did: starting strongly and with purpose, forcing Sloane into a plethora of unforced errors and a bewildered look towards her box after Jo continued to hit ridiculous winners for which she had no answer to.

Konta’s aggressive approach worked wonders, as she recorded 25 winners and six aces as well as 87% of first-serve points played. Stephens, who now has a 0-3 record against the Brit, struggled to sustain her usual levels against a mix of power and precision across the court.

After surprise defeats for Naomi Osaka and Serena Williams, this remains an unpredictable test ahead for whoever can come out on top and claim gold on Saturday. There’s no reason why that cannot be Konta, though.