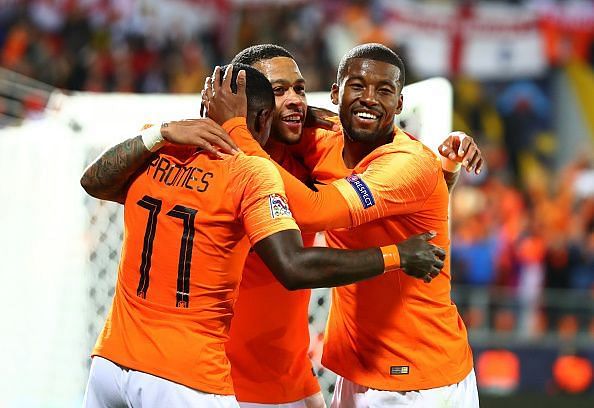 Here’s a look at five talking points, as the Netherlands earned a 3-1 (AET) win over England to book their place in Sunday’s Nations League Final against Portugal…

Kyle Walker‘s own goal and a clever finish from substitute Quincy Promes was enough for Ronald Koeman’s Netherlands to book their place in Sunday’s UEFA Nations League Final – where they’ll play Portugal after a 3-1 (AET) win against an unpredictable England display in Guimaraes.

Marcus Rashford broke the deadlock from the penalty spot after the half-hour mark, converting with poise after Matthijs de Ligt’s lapse in concentration and lunging challenge sent the Manchester United forward sprawling to the turf.

Widely considered as one of the world’s best young talents, de Ligt atoned for his error with a trademark bullet header beyond a helpless Jordan Pickford after 73 minutes. It was nothing less than the Dutch deserved, having continued to pile on the pressure against England’s nervy backline.

Rashford’s club teammate Jesse Lingard, who had come on after the hour mark, thought he had restored their slender advantage after a well-worked move was finished past Barcelona’s Jasper Cillessen.

After VAR review though, his goal was correctly disallowed as the 26-year-old midfielder had strayed marginally offside before Ross Barkley’s pass was played into his path. The scores remained the same and into extra-time we went, but it was England who wilted under the pressure.

Catastrophic mistakes in possession by John Stones and Barkley presented Holland with golden opportunities in the final third and despite last-ditch efforts to keep them at bay, it ultimately proved futile. So without further ado, here’s a look at five talking points from another eventful semi-final encounter: 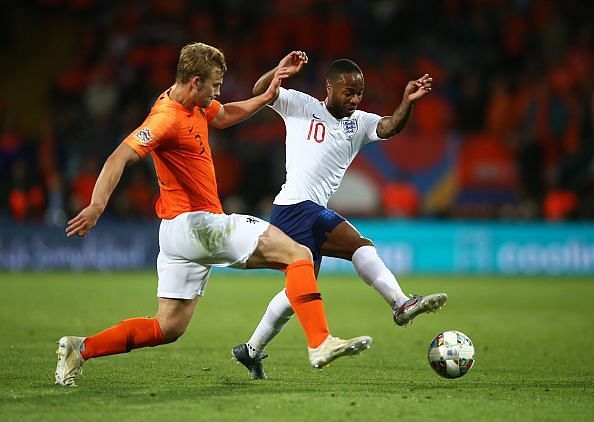 Despite being at fault for England’s solitary goal, de Ligt equalised and recovered from a sluggish start

Over the past twelve months, Matthijs de Ligt’s market value has skyrocketed – as many of Europe’s elite sides have been linked with big money moves for him.

Still only 19-years-old, the Ajax captain has led with distinction on all fronts and been unfazed against some of the world’s top attackers: something that has seen him earmarked as the building block to base teams around for the next decade and more.

So with that in mind, when someone as highly-regarded as de Ligt makes a mistake, everyone tends to overreact. He made two in quick succession and was at fault for England’s solitary goal of the game after making a lunging challenge on Rashford in the box, moments after failing to control Marten de Roon’s backpass.

Rashford instinctively pounced on the loose ball and naturally, de Ligt panicked as he quickly looked to atone for his mistake. By doing so he made another, conceded a penalty and gifted the Three Lions a slender advantage they didn’t necessarily warrant.

Within minutes you had armchair pundits furiously blasting the teenager’s decision-making; claiming he was incompetent, error-prone and vastly overrated. Too big to manoeuvre quickly as a centre-back.

Well then, why did he win a game-high six aerial duels, complete three tackles and clearances, one interception and blocked shot – as well as heading home their all-important equaliser?

Within a half of football he went from overrated back to his normal transfer value and having effectively nullified Harry Kane, his critics went silent again. He did well to not let his mistake affect the rest of his game but this is something he’ll have to get used to with experience, especially if he joins Ligue 1 champions PSG this summer – the new reported favourites for his services. 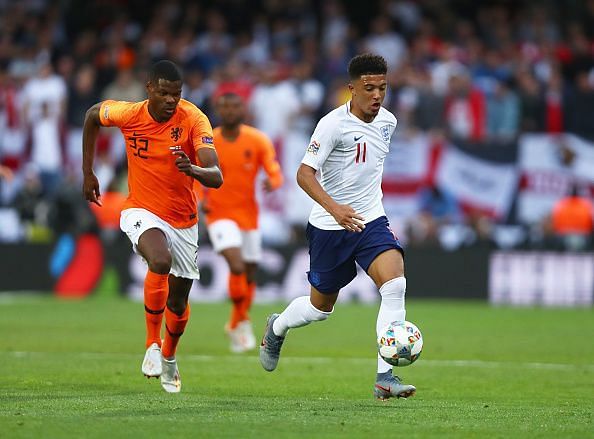 Sancho was a constant livewire whenever he had the ball, as Dumfries and Blind struggled to cope

At least in Rashford’s case, the substitution was warranted. Denzel Dumfries’ last-ditch challenge on the forward was powerful and fair, but clearly left the United youngster feeling worse for wear just before half-time. So he didn’t reappear for the second 45 and instead Harry Kane came on, relatively fresh from his Champions League heartbreak with Tottenham on Saturday.

Borussia Dortmund winger Jadon Sancho, a frequent livewire whenever near the ball, was replaced 15 minutes later. Jesse Lingard, who has struggled with injuries in recent months, came on in his place and besides scoring an offside goal, didn’t really do much in his hour on the pitch (extra-time included). Perhaps harsh but Jadon was one of England’s few bright sparks and the Dutch were struggling to deal with him too.

He had the beating of both Dumfries and Blind whenever he darted down opposite flanks, left de Ligt in his wake on a mazy dribble in the first-half and should’ve earned an assist from that run too if Rashford took the effort earlier. Despite only recording 21 touches – one more than Rashford – he continued to look a goalscoring threat and should have done better after heading Ben Chilwell’s excellent cross straight into Cillessen’s gloves from close-range. 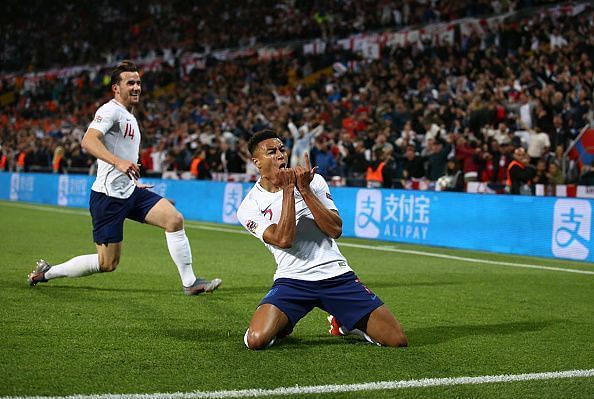 Just like Wednesday’s semi-final was not without shortage of talking points, this one didn’t disappoint either. However, VAR was much more conclusive on this occasion and once again highlighted the importance of having it within the sport – regardless of suggestions the atmosphere and nature of football is ruined by tense waiting for match officials to do their checks.

If VAR was not in operation, England probably would have won this fixture in normal time. Whether they deserved to is another question entirely, again the answer there is probably not but the decisions were correctly clarified after video review so how can you argue against that?

No-one wants controversy dominating the headlines and had Lingard’s goal stood, the game would have come into serious question. It’s 2019 and whether you like it or not, technology is needed at times to determine the verdict when incidents occur which could go either way.

In a game of this magnitude, with a reported €10m (£8.8m) prize money for the Nations League winner, we could have seen completely different finalists had VAR not done its job over the past two evenings.

Lingard was standing marginally offside, just as Ben Chilwell had his hands by his side and his back turned when Dumfries’ cross hit his body as it trickled back across goal. On both occasions, the correct decision was confirmed after a thorough review: but could you imagine the chaos had that not been the case? Thankfully, football won in this instance. Those who are complaining need to get with the times, as they are changing for the better. 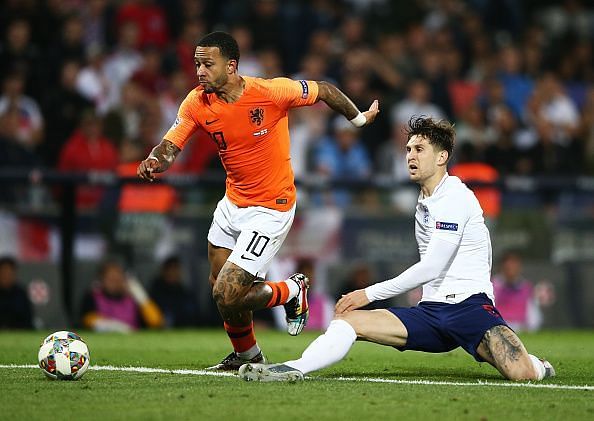 Stones dithered in possession and gifted Netherlands the lead in stoppage-time, before Barkley did the same

Gareth Southgate was defiant post-match, insisting that England’s pass-out-of-defence philosophy will continue to stick despite the individual mistakes which saw them exposed on this occasion. Brave some might say, but it makes sense as that’s how their best passages of play originated.

With that being said, he has more of a selection headache than he’s probably letting on within his backline to decide upon. If not for Jordan Pickford and his reflexes, the scoreline could’ve been ugly. Leicester fullback Ben Chilwell was the best of their four-man defence, which doesn’t come as much of a surprise with Manchester City monitoring the 22-year-old’s progress.

Kyle Walker (29), Chilwell’s club teammate Harry Maguire (26) and John Stones (25) should all know better though. Between the trio, they have 101 international caps but didn’t exude much confidence with their passing nor comfortability in possession against the Dutch – who sensed as much from the offset.

Stones will earn plenty of criticism and justifiably so, after dithering and gifting Memphis Depay the ball in extra-time. Memphis couldn’t believe his luck and despite Pickford’s initial save, Promes’ effort was inadvertently bundled home by Walker into his own net.

Walker almost fell victim to the same thing early on, but for Pickford to rescue him after attempting to dribble out of defence and getting the ball stuck between his legs. Both players were outjumped by de Ligt for his equaliser, while Maguire too was very nervy at times and the only defender on either side not to complete a tackle in 120 minutes.

Joe Gomez, Michael Keane and a number of England’s other defenders waiting patiently for their chance centre-stage will be licking their lips after yet another unconvincing display against credible opposition. 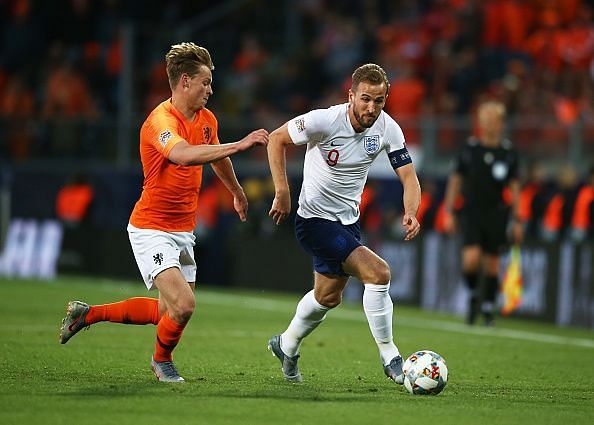 With each passing day, Barcelona will be increasingly glad they managed to complete the signing of Frenkie de Jong before these last few months intensified just how good the 22-year-old already is to the rest of the world.

€75m (£66.5m) spent to secure the Ajax midfielder’s services and naturally, they will be hoping teammate de Ligt joins him at Barca in the coming months. However, he shone as the Man of the Match in a classy display by the type of player England themselves have lacked in central midfield – to bridge the gap between encouraging promise and a winning machine.

In a climate where transfer fees are vastly inflated by a number of factors, it’d be too simplistic to claim de Jong will succeed Sergio Busquets at the Nou Camp. There’s no reason why he can’t be a better version of the experienced Spaniard for years to come and individual displays like this one prove exactly why.

He was more than the typical metronome and proved a nuisance for England both in possession and out of it. Whether it was tirelessly harrying opponents into mistakes or starting attacks with patience and surgical poise as he always does, Declan Rice said he’d be eager to nullify his impact in an intriguing midfield battle. Instead, he and the rest of England’s midfielders were second best against one of the world’s best.