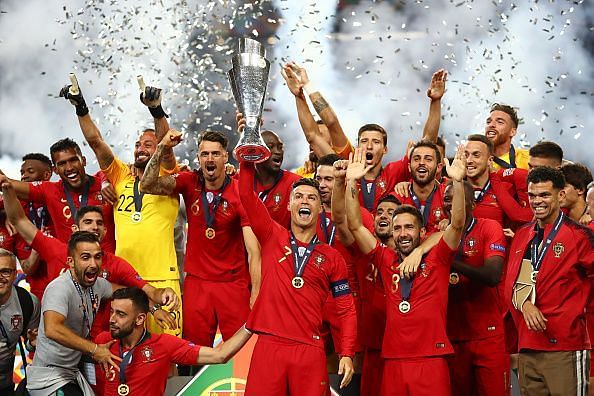 Here’s a look at five hits and flops after Portugal’s slender 1-0 win against the Netherlands saw them lift the inaugural Nations League trophy in Porto overnight..

Portugal taste European silverware for the second time in three years after a slender but deserved 1-0 win over the Netherlands means they have been crowned the inaugural UEFA Nations League winners.

A well-taken effort on the hour mark by Valencia’s Goncalo Guedes proved the difference in Porto as Fernando Santos’ men eventually made their pressure tell against a sluggish Holland – clearly still feeling the affects from their extra-time win over England on Thursday night.

Despite going close with Memphis Depay and substitute Luuk de Jong late on, Portugal held firm to keep their clean sheet intact and shut out the Dutch: who had scored in all of their last 13 internationals, dating back to a 1-0 defeat by this competition’s third-placed England side last March. With all of that in mind, here’s a look at five hits and flops from an curtain-raiser which proved a welcome ending to a successful international tournament: 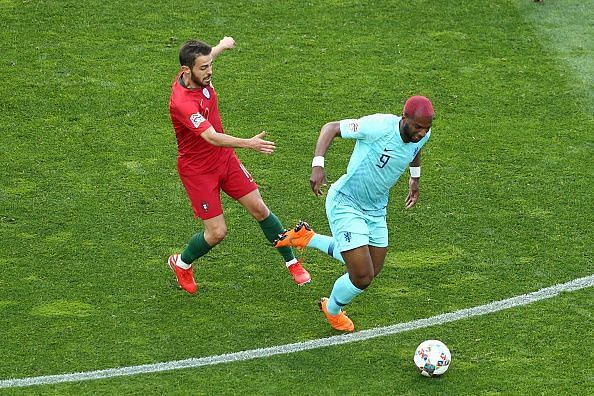 The experienced Fulham winger, 32, started again as he did against England on Thursday but it quickly became apparent that Ronald Koeman should have shuffled his attacking bunch for this one.

After delivering a match-defining contribution from the substitutes’ bench, Sevilla’s Quincy Promes was there again on this occasion when he really ought to have started. Babel had just 13 touches in 45 minutes of action and despite the team’s collective slow start, he didn’t do much to influence them forward from the left-hand side of their 4-3-3 formation.

He was dispossessed twice in promising areas and failed to stretch Portugal’s backline with his movement in wide areas either. Unsurprisingly replaced at the interval, you could make a case for all three of their forwards to feature here as this game was crying out for a quality centre-forward and Koeman didn’t have that luxury to call upon. 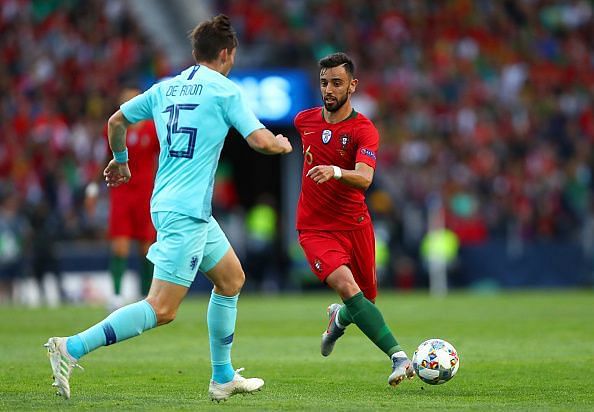 Constantly looking to get on the front foot, Fernandes was a nuisance for the Dutch to contend with

Well after an influential display like this, you can understand why the Sporting midfielder has been tirelessly linked with a lucrative Premier League move in recent months. Three key passes created, an eyewatering six shots registered, two tackles and an interception – this was an all-action performance from someone with an eye on bigger things to come.

He found his shooting range as time wore on and although decision-making wasn’t always perfect, he certainly tested Jasper Cillessen more than any of his Dutch counterparts could say for Rui Patricio.

Holding himself to high standards, he was visibly frustrated after wasting a promising chance on the edge of the area after Silva teed him up neatly. Importantly, that only spurred him on to continue probing and alongside the Manchester City man, the pair were Portugal’s driving force as they went in search of the all-important goal.

Looking to create chances wherever possible, he also didn’t shy away from his defensive duties and you can understand why Liverpool, Tottenham and Manchester United are heavily linked with a summer move for the 24-year-old. 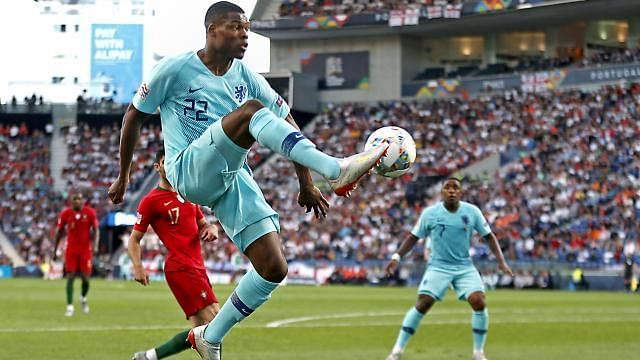 No tackles, one interception, three clearances and a game-high four fouls committed – this was a game to forget for PSV’s Denzel Dumfries. The 23-year-old has enjoyed an excellent campaign for both club and country, although his final two displays of the 18/19 campaign have left a lot to be desired.

Against England, he found himself on a tightrope early on struggling to cope against the interplay between Ben Chilwell and Jadon Sancho. On this occasion it was no different either: he didn’t appear comfortable and questions over his best position are justified as he appears more suited further forward – similar to a right-sided midfield role.

Dispossessed on three occasions, only Depay (58.1%) had worse pass completion rate than him over the 90 minutes and he was clearly being targeted by Portugal’s forward players as time wore on. Winning only four of 12 duels contested, this didn’t make for comfortable viewing from a defensive standpoint and his booking was only a matter of time. 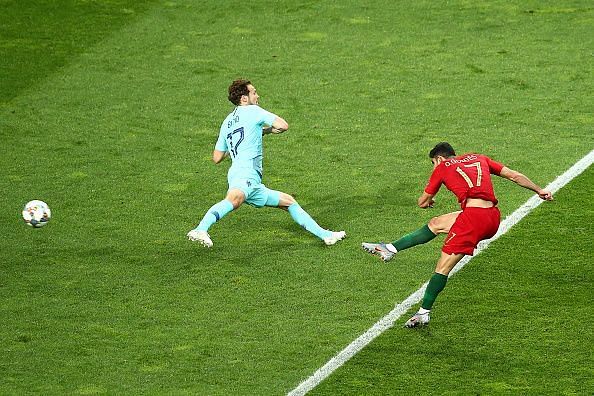 I’ve been critical of Guedes in recent seasons and feel justified for it because when he does apply himself, the Valencia forward can conjure up moments of brilliance which change games – precisely what he did on this occasion.

Despite being quiet for large periods in the first-half, he didn’t let that affect him and that’s important to note because previously, it’s something that has creeped into his game and seemingly dented his creative confidence at times. Winning five of 11 duels contested, he did his part to frustrate the Dutch backline and combined well with Silva and Fernandes in transition.

The matchwinning goal was special, even if Jasper Cillessen should have saved it. It was his first goal for Portugal since last summer’s World Cup against Algeria – 367 days – although he has been increasingly involved in their goals, so this shouldn’t come as a surprise.

Inviting pressure by opening his body up, he left Matthijs de Ligt for dead with a deft nutmeg and Silva was able to exploit the space in behind to devastating effect. Virgil van Dijk had to shuffle across to try and cut off the chance in its tracks, but Guedes made no mistake after being fed the ball back – firing powerfully towards the bottom corner. Cillessen got a hand to the strike, but it was not strong enough to acrobatically palm to safety.

Running out of steam towards the finish, he was replaced after 75 minutes for an inspired Rafa Silva – who performed well on his cameo. We want more of this Guedes next season, because the quality is there but consistency is key for him to continue progressing well. ​ 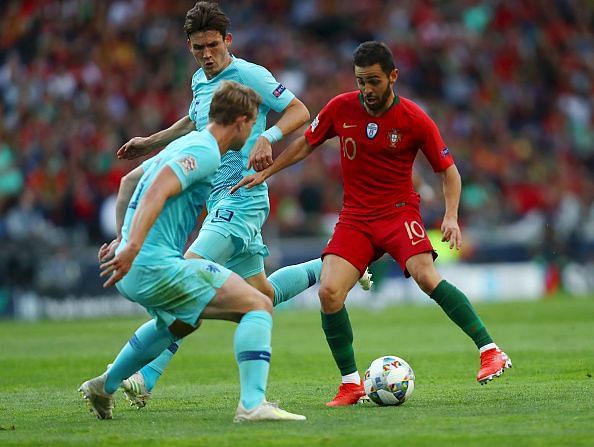 Silva was a constant threat for Portugal, looking to create chances aplenty and did precisely that as usual

If you’ve watched him regularly this season, then you’ll know that this type of tireless display is now what we expect from the Manchester City midfielder. Tipped to be a future captain in Eastlands, he leads by example with his infectious attitude off-the-ball and equally an eagerness to create chances for teammates when on it.

Even with Cristiano Ronaldo being his calculating self, the creative maestro did what he does best: orchestrate. He created a game-high five chances, completed six dribbles, two clearances, one tackle and interception as well as setting up Guedes’ matchwinner.

This season has seen him embrace more responsibility for club and country and this display typifies exactly why he’s an integral figure for both. He’s their driving force and although a 34-year-old Ronaldo may always be their talisman, Bernardo is the real star attraction.

Unsurprisingly won the Player of the Tournament accolade to accompany another piece of silverware in his ever-growing collection, he could get used to this.