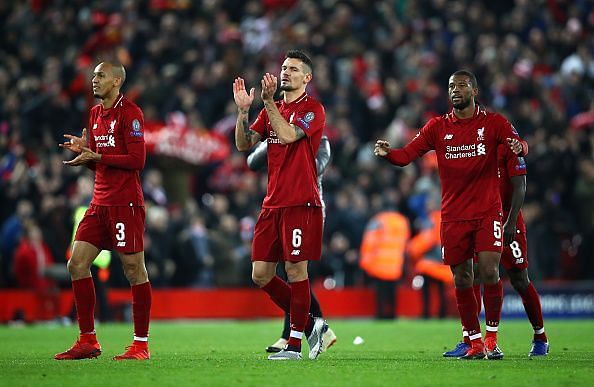 After winning their sixth Champions League title while narrowly missing out on Premier League glory, Liverpool need to strengthen this summer. Here are five players they should offload this summer…

After winning this season’s Champions League and narrowly missing out on their first Premier League title in years, Jurgen Klopp will be looking to strengthen his Liverpool side wherever possible over the summer months.

Having already announced their released list – which included Alberto Moreno and Daniel Sturridge – the Reds still need to account for more first-team departures, freeing up adequate space for new acquisitions on Merseyside ahead of the 2019/20 campaign starting in August.

With all of that in mind, here’s a look at five players they should look to sell this summer – all of whom can garner respectable transfer fees with interested clubs monitoring their futures: 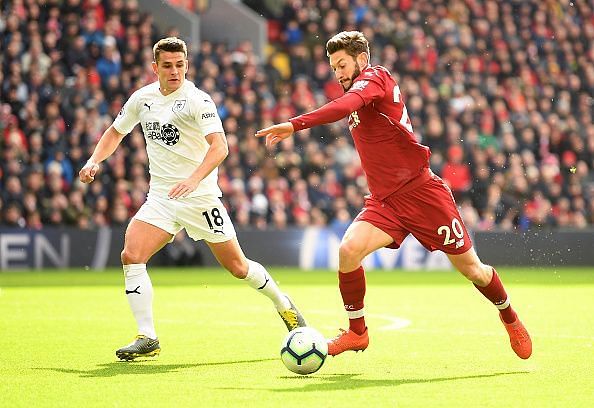 Lallana on a rare Premier League start against Burnley, back in March

It’s fair to say a lot was expected of Lallana after sealing his £25m move from Southampton in 2014, but injuries and inconsistency have seen the Englishman’s progression stall significantly across recent seasons.

The deal itself was five years ago and a lot has changed since then. Having flattered to deceive at times, he hasn’t been the player we saw some promise from at St. Mary’s and with one year left on his existing deal (option to extend), it doesn’t make sense for Liverpool to keep hold of him when he still has some value.

To further reiterate the point, he has made 16 appearances across all competitions over the past twelve months. From those games, he’s played a mere 568 minutes – an average of 36 per game.

That’s not good enough and unfortunately, the playmaker is just not someone they can depend upon as he had to settle for a bit-part role recently. Now 31, he finds himself nowhere near Gareth Southgate’s squad and isn’t good enough to start regularly under Klopp when fit so a move makes sense for both parties. 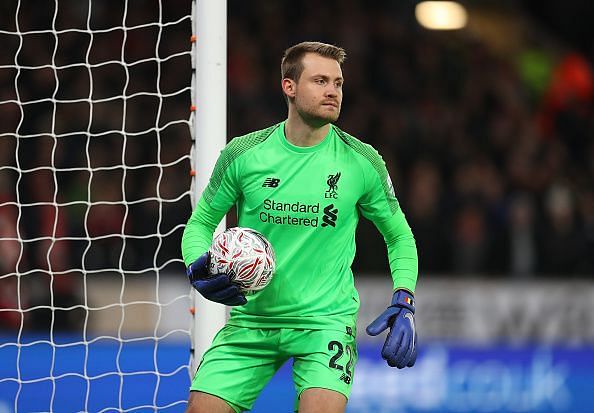 Well, this one is fairly straightforward. How many games did Mignolet play last season? A measly two across all competitions (both in the cup) and at 31-years-old given his pedigree, that’s simply not good enough.

There’s not much he can do to rectify the situation, either. Alisson is the club’s undisputed first-choice and with two years left on his deal, the experienced Belgian certainly has value despite enduring a frustrating campaign at Anfield. 22 international caps, plenty of Premier League experience and a decent goalkeeper for many sides, it’s no surprise Bournemouth and others are said to be monitoring his situation.

From the club’s perspective, they could definitely get something for him. He should leave to earn first-team football elsewhere, taking Lukasz Fabianski’s example as motivation that it can be done, provided he wants to stay in England that is.

His departure would present a golden opportunity for the Reds to grant one of the youngsters a chance to be the Brazilian’s understudy after Adam Bogdan was unsurprisingly released earlier this month – though Cardiff’s Neil Etheridge is said to be also on their radar. 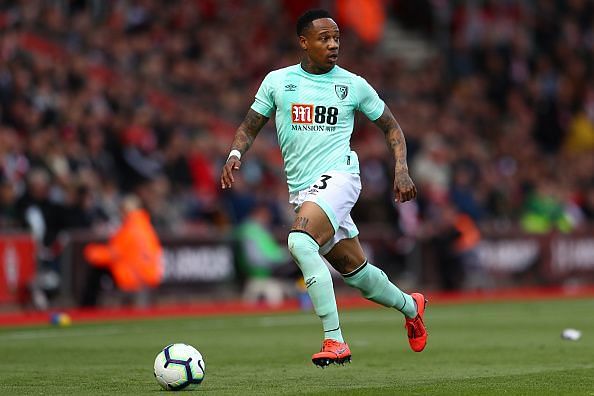 Clyne acquitted himself well on the south Coast with Bournemouth, but would be a mere back-up option

Just like Lallana, plenty was expected of him after joining from the Saints four years ago. Injuries have hampered his development and despite having years left in his prime to enjoy, he doesn’t appear to be any more than a convenient back-up option to Trent Alexander-Arnold after two excellent seasons from the fullback, who has asserted himself as one of the world’s best fullbacks.

Clyne is 28, TAA doesn’t turn 21 until October. So after recovering from an undisclosed long-term injury, it made sense for him to venture out on-loan elsewhere, building up match sharpness.

His loan spell under Eddie Howe at Bournemouth was a productive one, but it doesn’t make sense for him to stay when he can easily play regularly elsewhere in the league – like at the Cherries themselves. Naturally, sides aplenty will be interested even with his injury problems and he’ll hope they are finally behind him.

Over the last two seasons, he played a grand total of 10 games across all competitions for Liverpool. He made 15 appearances for Bournemouth in five months. From that perspective, it’s a no-brainer: he should venture elsewhere and look to rebuild his career, as Liverpool could command £15-20m for him while giving Rafael Camacho an extended look in as Trent’s back-up next term. 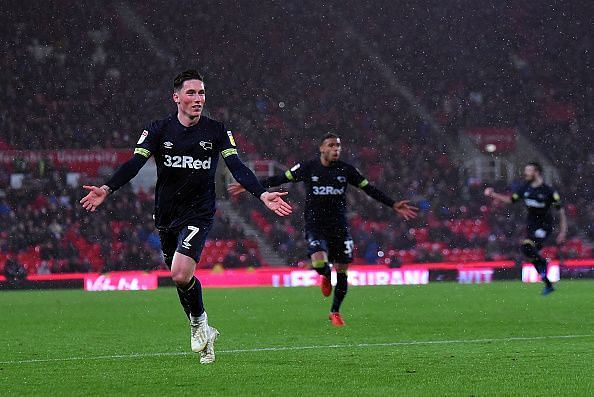 Harry Wilson has impressed on-loan at Derby, but wouldn’t be granted the same chances on his return

Oh, the forgotten gem. This will not be a popular choice but a lot of romantic Liverpool fans have been tracking his progress under Frank Lampard at Derby this term.

Ultimately though, the Rams are set for another Championship season after playoff final heartbreak and for all of Wilson’s technical brilliance, highlight reel plays and connection with Chelsea’s Mason Mount in the final third, none of that would translate on his return to Merseyside.

He wouldn’t be first, second or even third choice in any of his preferred positions and given he’s still young, why wait when you can play elsewhere? It will not be an easy decision to make having been at the club since he was under-9, but David Brooks and James Maddison are just two examples he should look to emulate elsewhere.

It’s very idealistic to suggest he’d be playing in more than a bit-part role under Klopp. Given his ability and potential, they can easily get £20m+ for him with plenty of suitors across the country’s top two divisions prepared to splash the cash. At this stage in his career, he needs continuity and a permanent home. Liverpool, as good as they have been to him, isn’t yet it. 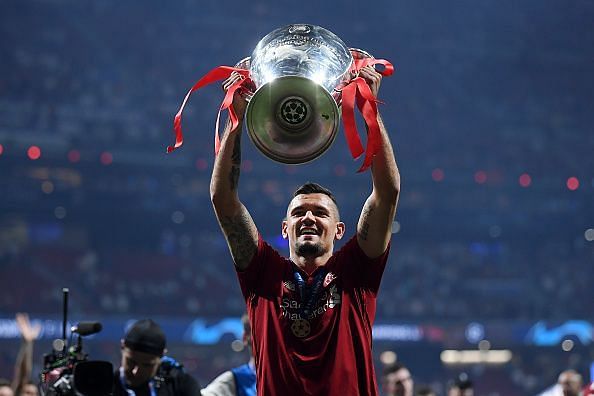 Lovren could be set to leave on a high this summer

This is somewhat controversial but given the circumstances, it really shouldn’t be. If we’re being brutally honest, Lovren just isn’t that good and with two years left on his existing deal, it makes sense for both the club and player to part ways this summer.

After all, he turns 30 next month and again, would present an intriguing option for interested suitors – AC Milan most recently linked – as someone with international pedigree and experience to his name.

With 52 caps and counting for World Cup finalists Croatia, he has endured spells of inconsistency since his own move from Southampton – whether that be through individual mistakes or generally just poor defensive form. The real reason he played as regularly as he did last season was through injuries, before he himself was overworked by their demanding winter schedule.

Virgil van Dijk and Joel Matip are both 27, while Joe Gomez turned 22 last month. Dejan is their oldest centre-back and weakest link, so it makes sense to sell and get an upgrade or integrate from within to oversee another first-team breakthrough. Ki-Jana Hoever, who came on for an injured Lovren to make his senior debut at Wolves, is a prime example.