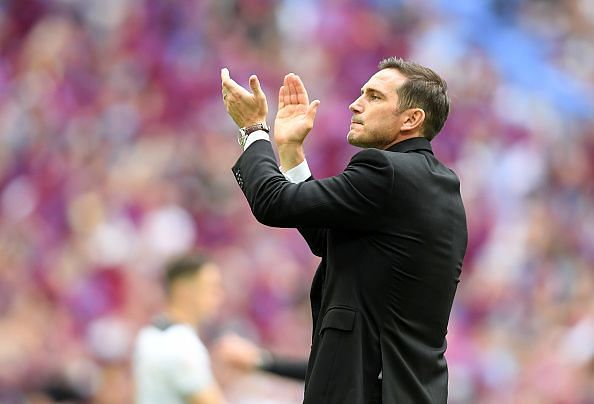 With Maurizio Sarri officially departing for Juventus on Sunday, here’s a look at three reasons why Chelsea’s new boss should not be Frank Lampard this summer…

After an excellent first season in management with Derby County, the Rams suffered playoff final heartbreak with a 2-1 defeat by Aston Villa a few weeks ago.

That hasn’t fazed Chelsea, who reportedly see their legendary midfielder Frank Lampard as the frontrunner to take over and become first-team boss this summer – with Maurizio Sarri having joined Serie A champions Juventus over this past weekend. It’s inevitable we will get a definitive answer on who will take the hotseat in west London sooner rather than later, with 2019/20 pre-season set to start in a matter of weeks.

Yet, as impressive a start to his managerial career has been, Frank just isn’t the man to take the Blues forward right now. So with that in mind, here are three reasons why he should not be their new boss this summer: 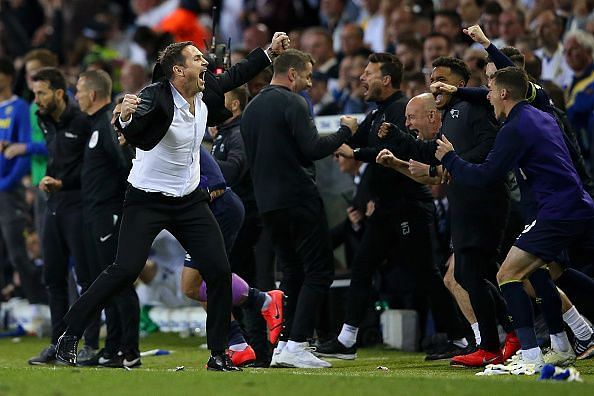 Starting with the most obvious point, Lampard’s inexperience – despite a promising start at Derby this past season – is important to take into account when analysing pros and cons. He has only been in full-time management for twelve months and has not yet learned enough, nor gained adequate experience and know-how to succeed at a club of Chelsea’s stature.

Naturally, you can argue he has experience from his playing days which does sometimes translate in management, but it’s not a seamless transition. He returned to the Blues in 2017 to earn the necessary coaching badges, working on his B and UEFA Pro Licence which was a year-long process in itself. As part of the curriculum, he worked with the u18 and under-23s, so it wasn’t long before links with managerial vacancies arose – such as Oxford United and a few others besides.

Joining Derby alongside Jody Morris represented a risk, but equally a welcome one for the Rams. They were bringing in a famous, highly respected name though if things went awry early in the season, they probably would have maintained a patient stance nonetheless.

They narrowly finished in a playoff position last season under Gary Rowett, so would have been hoping for similar success under Lampard. His appointment galvanised the squad, who enjoyed excellent form at times and were flying high alongside the top sides for most of the campaign. However, it’s clear that he’s just not as experienced right now. It seems an easy excuse but is justifiable, especially when considering the situations and issues he’s yet to deal with.

As good as Chelsea are, are not at that level right now where he can just slot in and capitalise – instead it’s high time for a rethink and they will not match the heights of Zinedine Zidane’s Real Madrid (2016-18) for at least a few seasons.

With Cristiano Ronaldo or Eden Hazard in your ranks, things are more convenient and straight-forward. Lampard would be inheriting a squad with plenty of work to be done and right now, needs more luxuries than the sentiment of a heroic return – which can quickly fade.

#2 Will have very high expectations, despite what might be promised 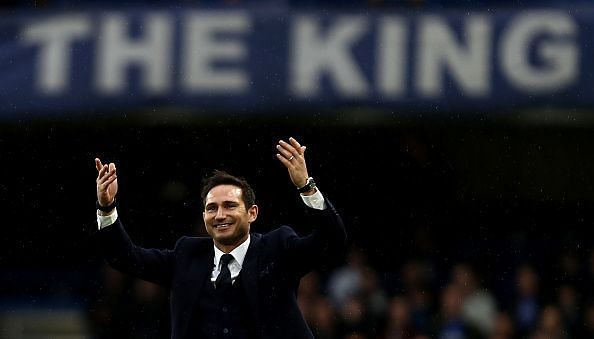 Despite being a Chelsea legend, there’s a chance promises will be made to reassure Frank of his job security

Given the volatility that comes with taking the Chelsea job, there’s likely to be a set of promises outlined for whoever eventually takes the hotseat. The existing transfer ban, coupled with departure of talisman Eden Hazard means that although it’ll be a tough ask to steady the ship, Roman Abramovich will expect the new boss to provide Champions League football and challenge for some silverware in 2019/20.

The notion that there is limited pressure on Lampard’s shoulders should he take the job is, frankly, nonsense. It’s the exact opposite: football being a results-driven business and their ruthless methods arguably make it the world’s most risky job.

The Blues themselves are aware, too. Over the last decade, they have been unforgiving with regards to managers and your job is constantly on the line at Stamford Bridge. So what happens should they lose their first few games of the new season? Murmurs about job security and whether his appointment was wise will begin to surface among the media.

Abramovich has a machine-like process where there is no time for sentiment nor second thoughts when it comes to hard-hitting decisions. Either the job is done properly and to his high standards, or you’re out looking for your next venture elsewhere. It has garnered criticism aplenty and while proving successful at times, this method has also proven problematic too. Whether that be Jose Mourinho, André Villas-Boas, Carlo Ancelotti, Roberto di Matteo and more besides, there is a high chance it will happen again before long.

It’s very romantic after his illustrious career came to an end just a few years ago, but he still needs two-three seasons before making that step-up in responsibility and quality. Look at it from this perspective: what happens if he gets sacked, 12-18 months down the line?

He wants to remain there long-term, like Sir Alex Ferguson did with Manchester United or Pep Guardiola at City. That’s not exactly how it works anymore, but wanting to replicate Eddie Howe et all, Chelsea’s patience is increasingly thin with regards to underperforming and defeats. They will say whatever needs saying to get you in the door but once you’re in, it’s hunt or be hunted – not the right mentality for Frank to have at this stage of his managerial career. However, the big question is: will his heart rule his head? 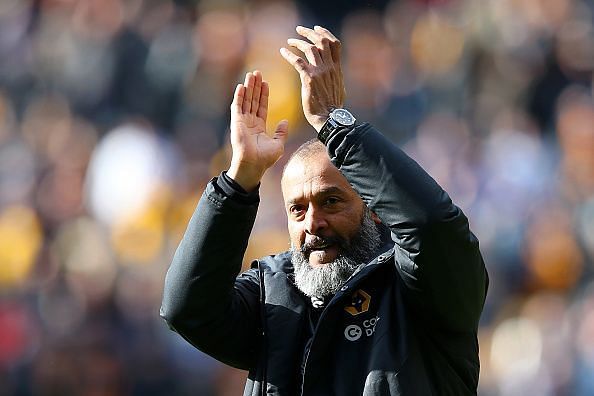 Last but not least, there are better options available for Chelsea to choose instead. If you look at the reported managerial shortlist, Lampard simply isn’t the best or most promising option right now. The likes of Ajax’s Erik ten Hag, Watford’s Javi Gracia, Nuno Espirito Santo at Wolves and departing RB Leipzig boss Ralf Rangnick all being mentioned.

Juventus’ Massimiliano Allegri has already announced he’s not in the running – with the Italian set to take a sabbatical year after five years in Turin.

Immediately, Gracia doesn’t stand out as an attractive pick being Watford boss. But when you consider what the Hornets have done this past season in the post-Richarlison phase, it’s been impressive to say the least by the Spaniard. With more consistency, they would have earned a Europa League berth for their troubles too.

That’s precisely what an overachieving Wolves did, in their first season back among England’s top-flight no less. Nuno has established them as a tricky opponent and one tough to beat at Molineux, while investing well and importantly playing good football with impressive results to boot. What would happen if the Portuguese was granted more financial freedom in future at Chelsea?

As for ten Hag meanwhile, got Ajax to the Champions League semi-finals – the club’s first time since the 1996/97 campaign, while focusing on striking the balance between youth and experience. Establishing a youth core there, the 49-year-old impressed while winning plenty of new admirers after leading Holland’s dark horses just minutes away from this month’s final in Madrid. ten Hag, appointed in December 2017, has a 74% win rate with Ajax and earned admirers this term

Steve Holland, Gareth Southgate’s assistant manager with England, is also said to be in the running. After eight years coaching Chelsea’s reserves (2009-2017) while also learning the ropes as a first-team assistant to various managers, that approach too makes more sense. So when you compare them all with Lampard, it’s quite evident how he’s still just getting his feet wet in managerial terms.

For all of Derby’s great storylines, they haven’t been in any trouble or faced much adversity during his reign thus far. Spygate wasn’t their own issue and with limited egos packed in that squad, you can only wonder how he would deal with things in trickier circumstances.

It’s unfair to thrust him in at Chelsea while ignoring others who are credible and arguably better suited to the job at present – he shouldn’t just get first refusal based on his name, even if he’s a club legend. That’s why it is imperative they give him some time and are patient with his managerial development from afar: otherwise it will end precisely the way fans don’t want it to, in tears and frustration.