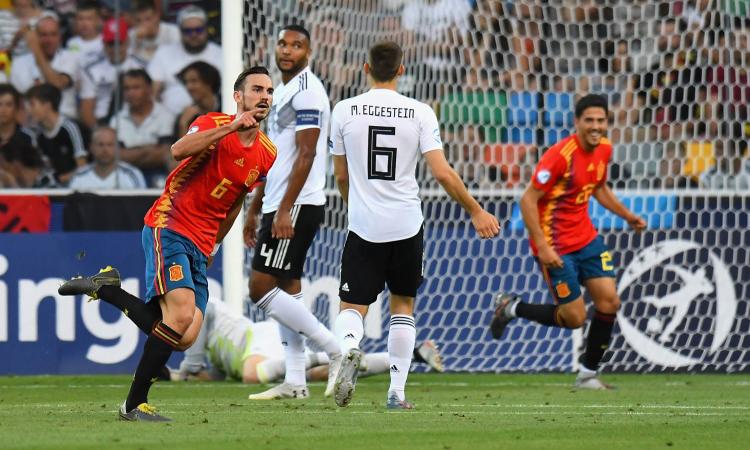 Napoli creative midfielder Fabian Ruiz starred as a classy Spain side were narrow 2-1 final winners over defending champions Germany to record their fifth trophy at this age-group in Italy.

In a repeat of the 2017 Final, Spain exacted revenge against a bullish Germany side who continued until the final whistle – even with the odds increasingly stacked against them.

On another evening though, this match would have been turned on its head midway through the first-half. Real Madrid defender Jesus Vallejo was fortunate to only receive a booking after a high, reckless challenge which caught an onrushing Gian-Luca Waldschmidt as he broke with speed.

Vallejo fortunate to stay on after reckless tackle

VAR reviewed the incident and ruled referee Srdjan Jovanovic hadn’t made a mistake and that a booking was the fair decision. After several replays, that certainly was not the case. That flashpoint came at a crucial moment in the game, 25 minutes after Ruiz broke the deadlock with an excellent strike from distance – capping a mazy dribble to perfection.

A 3-1 defeat by Italy in the first group game was undoubtedly a blessing in disguise for Spain, who have gone from strength-to-strength since – scoring at will while recovering from 1-0 down to thump France in Thursday’s semi-final.

There were a handful of half-chances in the first-half, but not much besides. Germany needed a second-half response and after an enthralling 4-2 win over Romania saw them book their final berth in midweek, could conjure up some magic at any time. They dominated possession in Spain’s half, though the team infront were too enjoying their own passing spells. It frustrated them, while also opening up space aplenty to create more chances.

Schalke goalkeeper Alexander Nubel could only parry Ruiz’s strike from distance, allowing Dinamo Zagreb winger Daniel Olmo ample opportunity to slot home a rebound. His deft flick into the corner was subtle and equally brutal, serving as a knife in German hearts as Nubel’s teammates stood watching on, motionless.

It could and probably should have been more: Carlos Soler hit the crossbar after a well-worked move, while Jonathan Tah and Benjamin Henrichs especially made important interceptions to keep the scores at 2-0.

Manchester City forward Lukas Nmecha came off the substitutes’ bench and made an impactful cameo – one that should have been rewarded with more. He created two chances, both of which were wasted by teammates in the box, the second with the goal gaping at Waldschmidt’s mercy after a clever backheel.

Borussia Dortmund’s Mahmoud Dahoud didn’t do enough and was often passive in Germany’s midfield, but Hoffenheim’s Nadiem Amiri certainly did. If not for his stinging strike from distance, there would not have been a frantic finish in Italy. He blasted one in over Antonio Sivera’s acrobatic dive with a few minutes plus stoppages left. That his effort took a wicked deflection off Vallejo was perhaps poetic justice, watching it loop over the Alaves man who had no chance.

Spain were managing the game fairly well up to that point but with player of the tournament Ruiz having been replaced for the more defensive Mikel Merino, you could have excused them for a few nerves late on.

It was the opposite: they controlled possession where possible, bided their time while the clock ticked down. It was a nervy finish and things could’ve been completely different, but Luis de la Fuente’s men were ultimately worthy winners and cap an enthralling tournament with another impressive display.