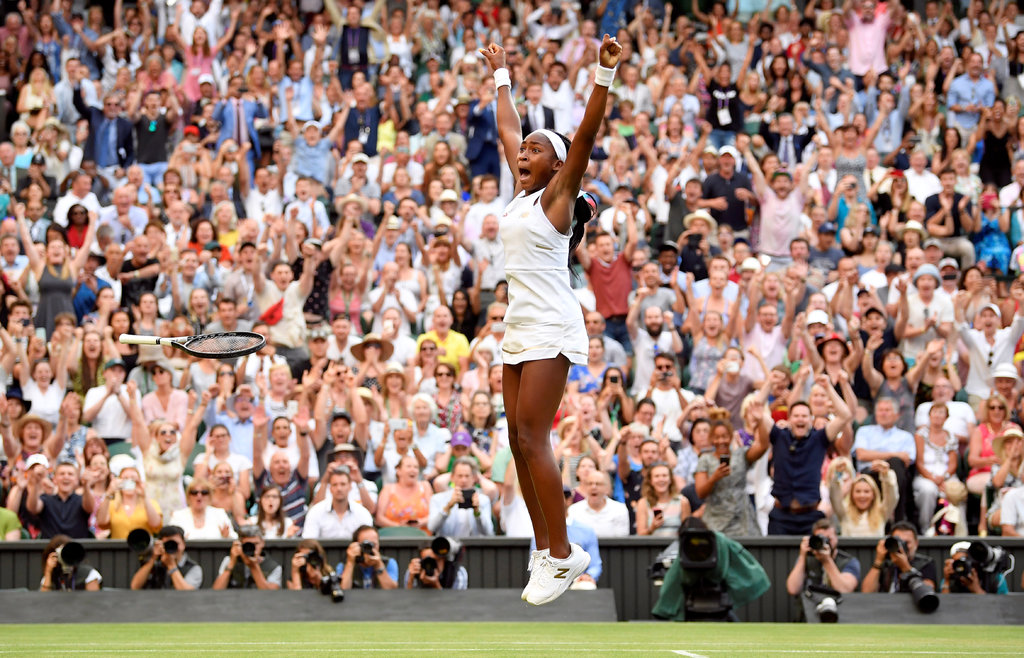 She had to save two match points and win a tense second-set tiebreak, but Cori Gauff battled hard to beat a tricky opponent in Polona Hercog 3-6, 7-6, 7-5 – booking her place in the second week at Wimbledon: where she’ll face world number seven Simona Halep on Monday.

After wins against Venus Williams and Magdalena Rybarikova earlier this week, Gauff had nothing to lose. Up against Hercog, who herself hasn’t been in the last-16 of any Grand Slam during her eleven-year professional career to date, the pressure was firmly on the Slovenian’s shoulders.

Neither started well as they got underway on Centre Court. Level at 3-3 in the first set, the tide shifted dramatically shortly afterwards. Cori made a number of unforced errors and her serving was patchy, which added to her frustrations.

Hercog meanwhile, was on hand to take full advantage with some aggressive shots, varied shot selection and frankly excellent serving – which is what you’d have expected from Rybarikova in midweek.

Her consistent serve speeds of 110-120mph allowed her to force Gauff into uncomfortable situations, manoeuvring well across the court as things suddenly were looking very ominous as she took the first set 6-3.

During this spell of dominance, she won six games without reply and despite Gauff’s best efforts, she was getting overpowered at times. It didn’t last long though, as the teenager’s persistence paid off as things drastically shifted once more midway through the second set.

Gauff finally got a game on the board at 3-0 down and although it was initially seen as futile, she continued varying her shot selection and began chipping away at closing Hercog’s lead.

Frequently approaching the net has its pros and cons, as Polona spotted the spaces in-behind and began exploiting them. However, Cori didn’t shy away and instead grew in confidence with the odds stacked against her. After all, she had nothing to lose at 4-1 down.

Her persistence paid off, as she was forcing errors, simple volleys, forehand winners and promising opportunities for Hercog to close out points. This was where Cori’s excellent shot defence came to the fore, as she intensified her pursuit of an unlikely comeback and made things more difficult for Hercog – challenging her to hit winners to finally close out the match.

Gauff made a number of ridiculous defensive responses, frustrating Hercog while keeping in rallies as the match wore on. (Picture source: Getty)

The crowd fed off that and 4-1 quickly turned into 5-4, as Gauff defended two match points and secured a crucial break point to level the scores at 5-5. All of a sudden, the match was on a knife edge. Hitting cleanly and with more conviction, some impressive winners – backhand and clever disguised drop shots – helped her to eventually win a tense tiebreak 9-7. It was game on again.

Hercog received medical treatment with her back and leg in some discomfort, but that was the least of her immediate problems. All that pre-match pressure had just intensified, infront of a partisan crowd eager to see a fairytale story continue, one she was aware of. Two match point opportunities squandered, she had frozen in the game’s biggest moment to close out and was a shadow of the player who was seemingly dismantling Cori less than an hour before.

Instead, things continued to worsen for the Slovenian. The game was up for grabs and that fact certainly motivated Cori, who clinched an important break point at 2-1 up and profited as Hercog’s unforced error count continued to rise. The shift was startling as the teenager’s serving consistency improved and needed to, given how successful her opponent was when benefiting from the same earlier on.

Cori continued to feed off the SW19 crowd as she grew in confidence and continued cutting the deficit. (Picture source: Getty)

The longer rallies went on, you just believed Cori would prevail as her good shot defence was again on show – but then another moment to solidify her position went begging. Hercog quickly recovered a 4-1 third set deficit to level at 4-4, winning successive games along the way.

Gauff was struggling for the same power and depth on her forehand strokes, while also overplaying at times. Just as momentum appeared to shift away from her grasp though, two timely aces – she only had five in three hours here – proved crucial in restoring a slender 5-4 advantage. Hercog responded with two perfectly-weighted volleys on her serve and levelled again at 5-5, before Cori edged another love-hold service game and the end was nigh.

It was telling that Hercog delivered her first double-fault of the deciding set late on, before the pair were engaged in a gripping back-and-forth and ultimately blinked at 40-all with another miss into the net. Cori’s remarkable recovery was sealed after Hercog lobbed her at the net, but the ball bounced out of bounds to complete an enthralling encounter.

Frankly, Cori had no right to win and could’ve easily folded with the odds stacked against her – not least when match point down twice in a 70-minute second set. Instead, the resilience on show was clear for all to see and her defiance proved pivotal after dropping her first set of the Championships.

Any question of conditioning was answered emphatically, while her persistent nature forced more mistakes even if signs of inexperience were evident at times. Cori becomes the youngest player to reach Round Four at Wimbledon since Jennifer Capriati in 1991 and with her latest win, is now ranked 139th in the world.

Halep, who beat Victoria Azarenka in straight-sets, represents a completely different challenge altogether and there won’t be much time for her to process that with a mixed doubles match to play tomorrow, but that’s part of the intrigue: just how long can this fairytale last?