Tanguy Ndombele sealed a club-record £63m move to join UCL finalists Tottenham this week and the French midfielder’s arrival in north London reiterates a signal of their lofty ambitions.

Fresh from their UCL Final heartbreak in Madrid last month, Mauricio Pochettino ventured east of Spain to Barcelona for a well-earned holiday among home comforts. The manager recharged his batteries after an arduous campaign, which saw Spurs exceed their European expectations while failing to make progress among their league rivals.

Despite some promising spells, they ultimately finished fourth and a whopping 27 points behind champions Manchester City, with inconsistency and poor squad depth proving detrimental to their development under the Argentine in England’s top-flight.

An eyewatering 13 defeats from their 38 matches was the highest tally among the league’s top six sides, which speaks volumes for the issues that were quickly apparent after another summer without transfer business this time twelve months ago.

So with that in mind, coupled with the unveiling of their impressive new stadium back in April, Pochettino reportedly outlined a number of transfer targets he trusted Daniel Levy and his higher-ups within the club hierarchy to approach this summer. Lyon’s Ndombele was his number one priority and following the 22-year-old’s displays this past season, you’d quickly understand why. It wouldn’t be easy either, for a highly-rated French midfielder being courted by a number of Europe’s elite sides – both in England and abroad too.

However, it was inevitable he’d complete a big-money move. You could be forgiven for thinking the club in question would be anyone but Spurs. So the fact they unveiled him as their club-record signing in midweek and have managed to snatch him under the noses of other interested clubs is a coup in itself. One that Pochettino, widely regarded as one of the world’s best, was ultimately key to convince Tanguy’s decision.

“It’s true. Tottenham are a big club, they finished fourth place in their league, were Champions League finalists – which player would not be interested in a big club?” – Ndombele when quizzed about his future last month

Reports claim Ndombele visited the club’s facilities in early June and Pochettino had contacted the France international, stressing their intentions to build a side capable of winning next season’s Premier League.

After such a significant drop-off, winning it all may seem far-fetched. But challenging for it is more of a realistic target, as they look to emulate Liverpool‘s success in recent years while closing the gap at the top in the meantime.

Pochettino has been outspoken about the type of player he wants to attract in recent seasons and is finally being backed for big things in the transfer market. He wants them to match his lofty ambitions, which is fair given the progression he has overseen despite limited transfer resources. 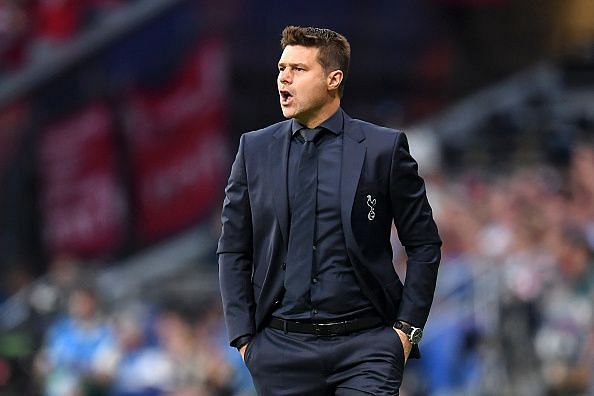 Barcelona, who unveiled Frenkie de Jong after his £65m move this weekend, were said to be interested. City too were linked but had their sights set on Atletico’s Rodri, while Juventus captured free agent Adrien Rabiot and his former club PSG signed Manchester United’s Ander Herrera.

The latter two were free transfers, albeit on lucrative long-term contracts – but the point remains the same. Their seeming reluctance to spend money in an area they need quality reinforcements is naive, though it’s also to Tottenham’s benefit.

Davinson Sanchez (£40m, 2017) was previously their club-record signing and that both were born in 1996 is no coincidence for a team eager to mould a younger base. It makes sense to continue targeting younger players with potential to fulfil, like Leeds’ Jack Clarke – while representing a risk that often pays off.

The club were said to be eyeing a long-term replacement for Moussa Dembele, even before his surprise move to China in January. They’ve finally got that man in Ndombele, who will instantly become one of the club’s highest-paid players on a considerable wage increase from his reported £45kpw Lyon deal. But is he worth the hype?

Ndombele: just how good is he?

Comparisons to compatriot N’Golo Kante are lazy but unsurprising given their similarities, though Tanguy thrives more in a creative sense while the World Cup winner relishes his defensive duties. With that being said, he’s equally capable of embracing those defensive responsibilities when called upon.

It goes without saying he must concentrate and adopt the same mentality in every game he plays, regardless of the opposition. That was identified as a potential caveat in recent seasons, though he’ll quickly learn England is an entirely different beast to Ligue 1 football.

“I believe my style of play is well suited to English football and Tottenham are giving me the opportunity to show that, so I am extremely happy to be here.

It’s been a dream since I was a kid to play in the Premier League, now I can make that come true. I hope to bring what I know I can do, my bit for the team and achieve great things. I am here to win silverware.” – Ndombele during his first interview with his new side

Club captain Hugo Lloris and fellow midfielder Moussa Sissoko are both international teammates with Les Bleus, so while acclimatising to a new country could take time, he should have no issues settling in.

His impressive form quickly attracted the attention of Didier Deschamps, granting him a first senior appearance last October against Iceland. He hasn’t looked back since, establishing himself as a permanent fixture alongside Paul Pogba, Blaise Matuidi and Kante in a stacked France midfield. Tottenham have ambitions to challenge at the top and signing players of Ndombele’s quality is precisely what they need to bridge the gap – something Liverpool did by acquiring Fabinho and Virgil van Dijk within six months of one another.

The circumstances are different, but paying a premium at this stage is not to be baulked at, not least given his world-class potential and longevity to boot. That could in turn prove money very well spent, as many tipped him to be the first €100m-rated player sold from France.

What’s next in store for both clubs?

Lyon, who tend to sell some of their best players every summer, continue to replenish their squad with shrewd young talents and benefit significantly in the long-run. They finished third in Ligue 1 last term, three points off Lille in second but 19 points behind winners PSG.

Club president Jean-Michel Aulas maintains his reputation as a tough yet fair negotiator after acquiring a capable replacement before allowing Ndombele to leave. They did precisely that with Flamengo defensive-midfielder Jean Lucas for €8m (£7.1m), just like Ferland Mendy’s Real Madrid departure last month.

A top-four place has been their ceiling recently, with PSG too strong to relinquish their grip on a league they’ve dominated for a decade now. That doesn’t limit their scope for progression after an encouraging campaign on all fronts. Reaching the semi-finals and quarter-finals of their two domestic tournaments, coupled with a valiant effort over two legs in their Champions League last-16 tie against Barcelona is nothing to dismiss lightly.

As for Tottenham, the signs are promising. They made no signings since January 2018 and within days, completed two moves. Clarke, set to return on-loan to Leeds, is one for the future. Ndombele is an immediate upgrade on their current midfield options and the type to build a team around.

Fulham’s Ryan Sessegnon and Real Betis midfielder Giovani Lo Celso are reportedly among their other targets, while this deal cements the club’s faith in Pochettino’s project-building in north London: increasing chances he stays there long-term after some revealing comments in May. Toby Alderweireld and Christian Eriksen are two key players within Poch’s system, though both may depart in big-money moves over the next month or so. There’s plenty still to improve, which they’re certainly aware of.