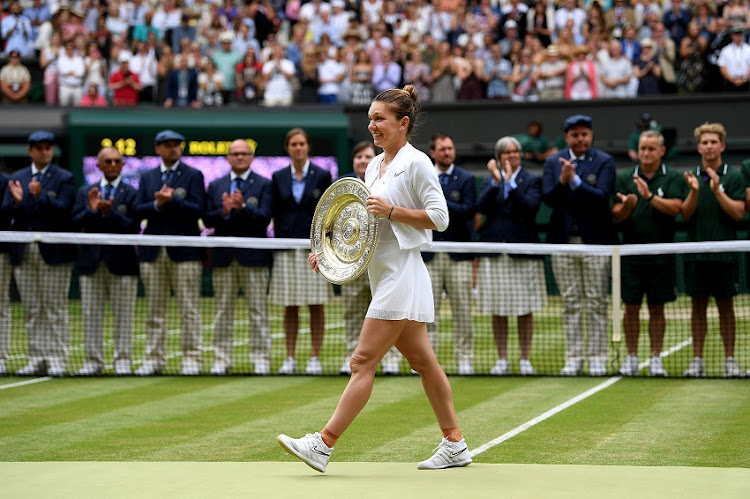 Simona Halep was in imperious form as she stormed to a 6-2, 6-2 win over Serena Williams, to win her second Grand Slam title after just 56 minutes on Centre Court. Meanwhile, the wait for a record 24th Slam triumph continues for the American, who turns 38 in September…

This wasn’t meant to happen. But that’s the beauty and unpredictability about sport: anything can happen and things can drastically shift at a moment’s notice.

Serena’s serve was broken twice in quick succession as Halep flourished during one of her career-best displays to date as a stunned SW19 crowd watched on. The American’s sluggish start was duly punished by the purposeful Romanian and after just 15 minutes, she was 4-0 down with a mountain still to climb.

Halep was unforgiving and unapologetically brutal – precisely what she needed to be. After all, a 1-9 H2H record vs. Williams isn’t something to be proud of, even up against arguably the greatest female tennis player of all-time. Despite winning two of the next three games and saving a set point, the damage was already done. Halep sealed the first set in 26 minutes and yet there was more to come.

Experience can only help you so much when you’re being pushed to uncomfortable situations and forced into errors galore, Serena was reacting after the fact and looked dishevelled. Three aces and one return ace midway through the second set, she looked bemused – as if to question where this was from her when it mattered more during the first?

If you don’t start matches well, you need something different to dig out points and overcome tricky moments. But whenever there was an opportunity to gain separation and truly stretch Halep, she struggled and an error-laden display only boosted the Romanian’s confidence.

That’s not to say Halep wasn’t deserving, far from it. Having won Roland Garros last year, she finished the year as world number one in successive years (’17, ’18) and became the first Romanian to win the Wimbledon Final. The way she swallowed surprise package Gauff in Round Four, overpowering her nonchalantly, was a similar display here. The type of performance we’ve come to expect from Serena herself over the past two decades.

To her credit, Serena responded with added fire to start the second set. It didn’t last long though, having relinquished another game on her serve at 2-2 – which energised Halep as the unforced error count continued to rise with frustrating frequency. Serena tried to get herself back into the match with brief flashes of her quality, but they were too far and few between

Serena recorded 26 unforced errors and relinquished control during key moments which were ultimately match-defining. No player has recorded fewer errors than Halep in a Wimbledon Final, posting an impressive three in 56 minutes – which reiterates her high levels and consistency under pressure. There was no time for emotion and rather than tire or see those levels drop-off as the match wore on, she continued like the relentless athlete she is.

3-2 quickly became 4-2 and Serena’s last efforts typified her losing effort: not for want of trying, nothing she did was going right. Missing simple forehands, overhitting shots at the baseline and poor shot selection saw Halep dominate rallies while frustrating Serena into making the net a common occurrence during a memorable win.

Williams lost her serve to gift a 5-2 advantage, missing two clear chances to end the game and suddenly Simona found herself with three championship points. She only needed one to make more history.

Halep moves up to world number four after her second Grand Slam triumph, while Serena returns to the top ten, 400-odd points behind compatriot Sloane Stephens in eighth place.

This performance was a microcosm of how she’s gone about business this fortnight – from battling compatriot Mihaela Buzărnescu in R2 to Zhang Shuai in the quarter-finals, she’s taken everything in her stride.

Her straight-sets win over sister Venus at the 2017 Australian Open was Serena’s last Grand Slam win, two-and-a-half years ago. It feels like it’s been longer than that after her pregnancy break and whatnot, though she lost twelve months ago at this stage against Kerber with a similar display before Naomi Osaka prevailed during a telling US Open Final last year.

She revealed she’d been making subtle adjustments to her game, improving all the time – citing doubles play with Andy Murray and Venus for her approach play at the net, though it didn’t matter much on this occasion. There were shades of her last two final performances creeping in, with unforced errors galore – 30 against Kerber and 21 vs Osaka.

Her quest for an elusive 24th continues and set to turn 38 in two months, time isn’t on her side any longer. Earlier this week she revealed that questions over her recent finals record weren’t a hindrance but after another underwhelming display at the final hurdle, how long can she sustain this? If opponents like world no.1 Ashleigh Barty, Osaka and Halep are more consistent, that answer could prove a definitive one.