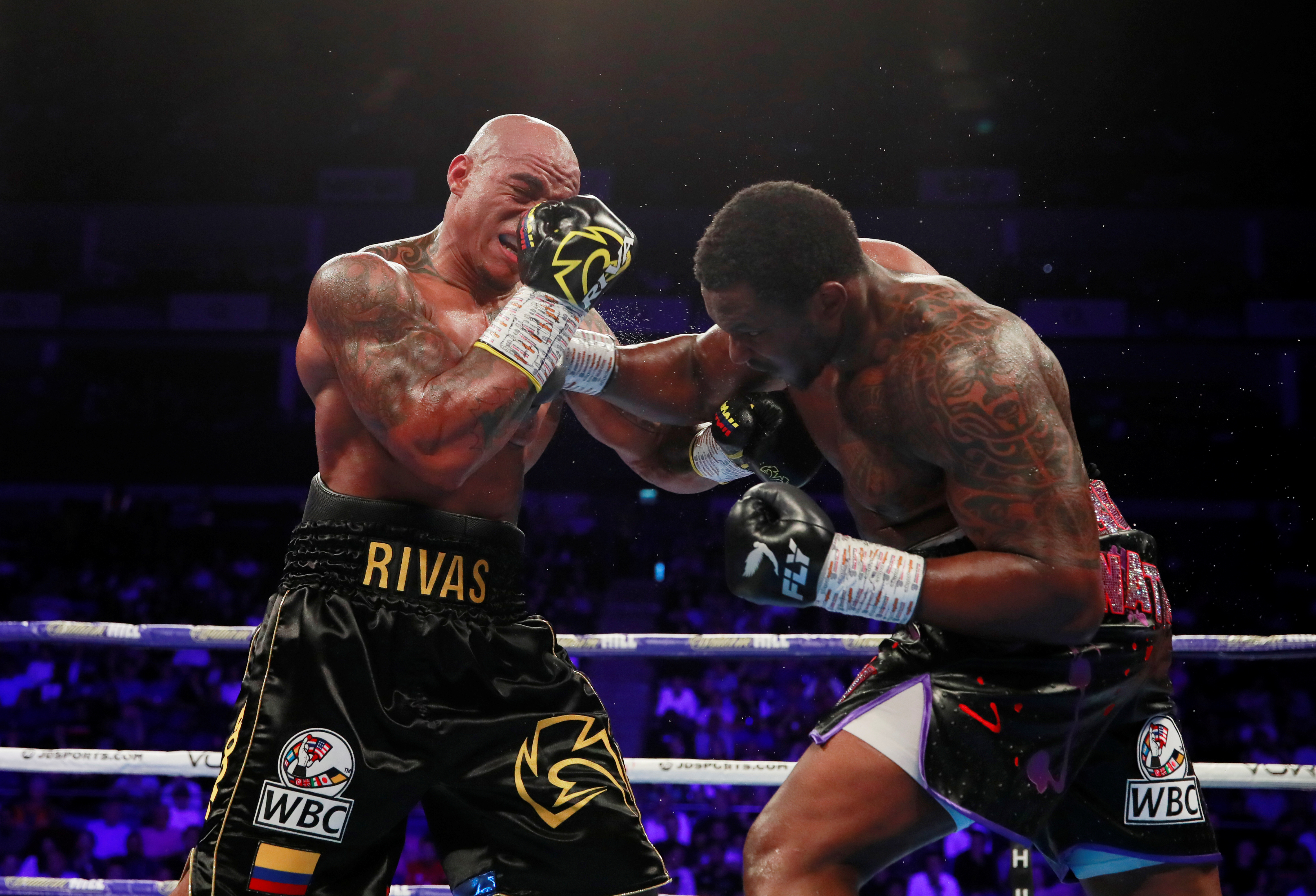 Two of the three judges scored it 115-112, while the other had it 116-111 in Dillian’s favour, during an enthralling battle between two with plenty on the line. Whyte, who has been number one contender for over 600 days now, was certainly taking a significant risk by opting for this bout – against a heavy-handed unbeaten Colombian with much to gain from an impressive display on this occasion.

He started purposefully as expected and was eager to push the pace against Whyte, who was calculated in his attempts to suss out the 32-year-old early on. However, Rivas definitely respected Dillian’s power after being rocked by a stunning right hand in the second-round, though his shot defence came to the fore as he avoided a brutal finish to survive.

The third round was somewhat of a breather for both fighters: Whyte had expended plenty of energy searching for the killer blow, while Rivas’ defensive weaving and recovery phases were in play. However, both the third and fourth rounds went Whyte’s way as he began to take control of the fight. Oscar’s gung-ho approach was less forceful and more methodical, perhaps after being hit hard one too many times early on.

With good head movement and an eagerness to come forward, he continued to lose rounds against a refreshingly versatile Whyte – one who continued switching up stance and strategy, which was frustrating and left him little opportunity to counter-punch. 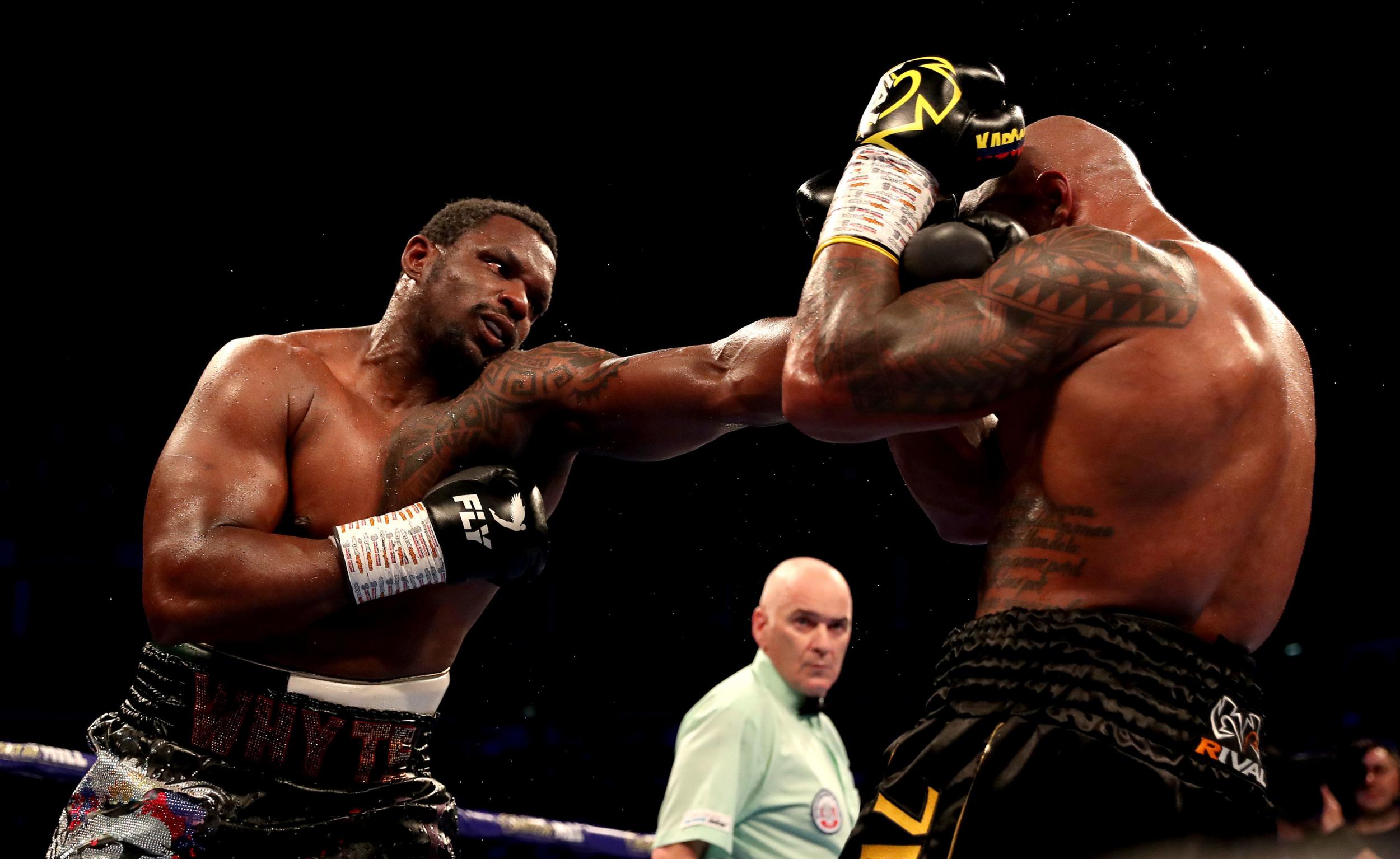 Rivas was fearful of Whyte’s power as the fight wore on and rightly so, given Dillian’s success with the jab and right hand combo. (Picture source: Evening Standard)

His hand speed and shot selection was good too, catching Rivas with multiple stinging jabs as he suffered a cut near the left eye. Rivas’ trainer Marc Ramsay gave him an earful in the corner ahead of round seven, which saw him return to the same high-intensity approach he started with. It fluttered in stages though, given Whyte’s defence and fearsome body shots while opening up uppercut opportunities.

Those one-dimensional tactics were too easy to counter and despite his hard-working style, it wasn’t exactly smart against a fighter of Dillian’s quality, playing to his strengths.

That was up until round nine though, when that same relentless pressure saw him rewarded with an emphatic knockdown. Whyte had won the previous seven rounds and despite a tough scrap, was controlling the fight. Within an instant, it threatened to crumble into nothing.

Whyte was rightly stunned as he got back to his feet and attempted to recover, though Rivas could smell blood and pushed for a shocking knockout victory. Persistence and ring-craft proved pivotal, as Dillian held firm while landing some fierce shots of his own in retaliation – this wasn’t over just yet. In round ten, both were going for knockout punches and it was a remarkable comeback round from Whyte: the type of defiant display fans are used to seeing from a likeable character who relishes these high-calibre fights, after all.

In round eleven, both were clearly fatiguing as their defensive reflexes and posture was down – though Rivas wasn’t attacking with the same intensity needed to force a big shift on the scorecards, even with the R9 knockdown.

As round twelve came and went, one thing was apparent: Whyte had passed another necessary acid test, effectively killing any Rivas momentum in its tracks while showing his ever-improving abilities as a world-class fighter.

His versatility and intelligence continues to impress critics and during a must-win bout, he came out on top with flying colours – even despite being knocked down and without a knockout victory to boot. That speaks volumes. Now, he’s the mandatory challenger for Deontay Wilder’s WBC belt and will face the champion – whether that’s Luis Ortiz, Tyson Fury or Wilder himself – at some stage between now and May 2020.

“The man was undefeated, he had 100 amateur fights… I had seven. This [training] camp wasn’t great, I won’t lie there was a lot of stuff going on in the background but I’m a professional. Oscar is a great fighter, a tough man and I have a lot of respect for him. Thanks for him, he helped me improve.” Whyte during his post-fight interview

Whyte revealed Eddie Hearn is already in talks to schedule a fight at some stage in November/December time for him, while he refused to get drawn into the politics that surrounds his status as number one contender – a rank he has held for almost two years.

“We’ll see, in boxing a lot of things get said and not a lot happens. We’re all in this to be world champion, everyone writes me off but I’ve just outboxed a world-class fighter and dominated the whole fight.”

What about Rivas then?

Rivas never stopped trying, which is testament to his character, but his one-dimensional tactics were effectively isolated and he consequently found himself outboxed against a better opponent in Whyte, who continues improving with more fights like these in his repertoire.

For someone who beat both Andy Ruiz Jr and Kubrat Pulev as an amateur, there’s plenty of work for Rivas to do to avenge this defeat – the first in his pro career – and a necessary one to learn from, given the quality of his previous opposition.

At 32, time isn’t exactly on his side as far as competing among world-class opposition goes in the hunt for championship opportunities, so it’ll be intriguing to see how he reacts.

What else happened on this card and what’s next?

There were also contrasting wins for Dereck Chisora and David Price, the former wowed with an emphatic second-round knockout over Poland’s Artur Szpilka while 36-year-old Price displayed a boxing masterclass to cruise beyond a lacklustre David Allen.

Allen was stretchered off to hospital and is receiving medical treatment after a tough loss, where he sustained multiple blows to his face after lacklustre shot defence. He posted on social media afterwards in reflective mood revealing that given health worries, his career might be nearing its eventual end.