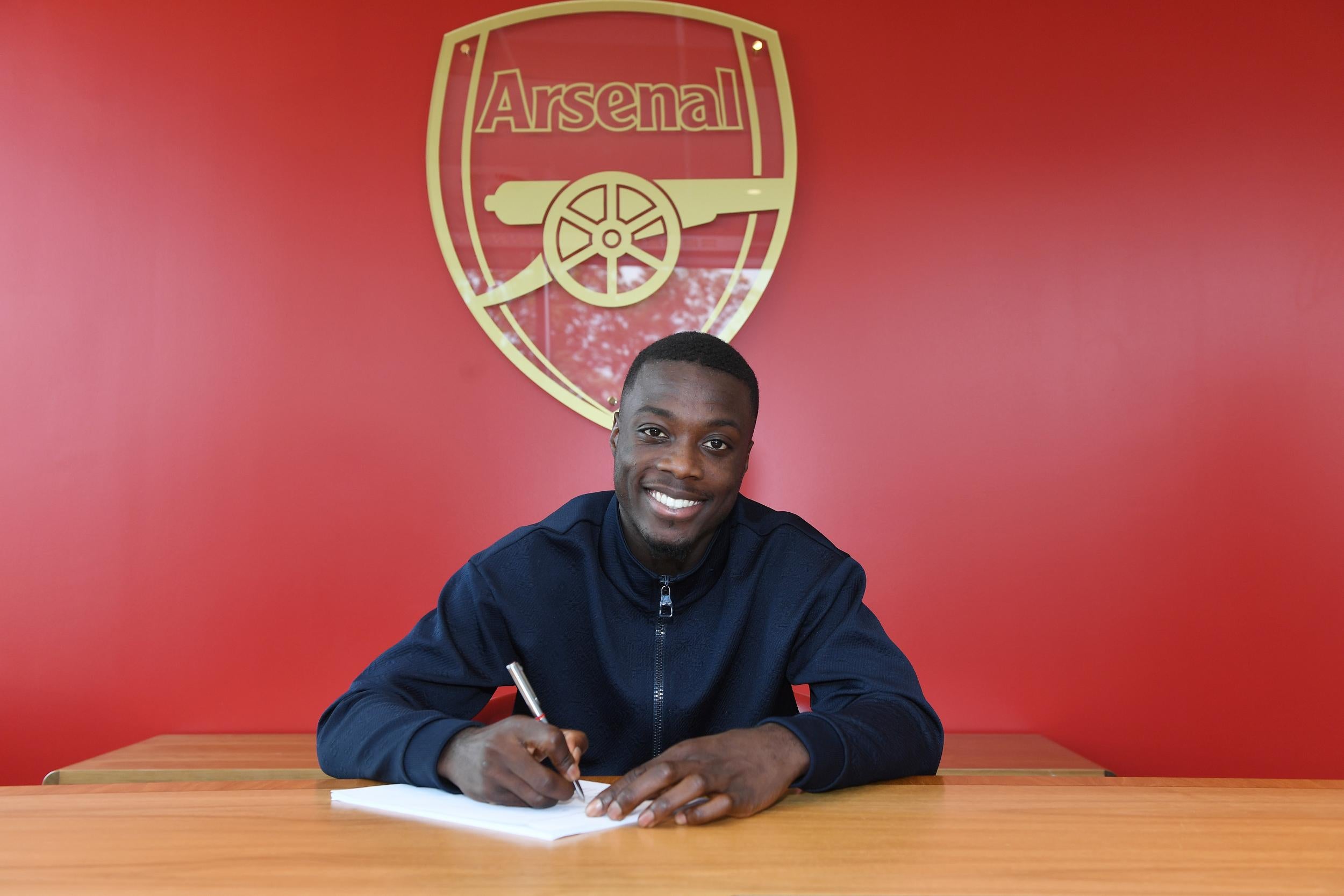 With a whole host of Europe’s elite clubs chasing his signature, Arsenal have stunned critics to complete a club-record £72m move – structured with instalments – for the highly-rated winger on the eve of the 2019/20 campaign.

Well, so much for that then. Arsenal’s reported £45m transfer budget has already been shattered during a busy summer of change at the Emirates – Nicolas Pepe’s arrival the latest in an intriguing list of incomings bubbling under the surface.

Putting pen to paper on a five-year contract, the £72m fee will be paid in yearly instalments but ultimately eclipses their previous club-record signing, Pierre-Emerick Aubameyang from Bundesliga giants Borussia Dortmund in January 2018.

He completed a medical on Tuesday and the possibility of a deal intensified over the weekend, as highly-respected BBC journalist David Ornstein tweeted the following on Saturday morning:

Arsenal have reached an agreement with Lille to sign Ivory Coast winger Nicolas Pepe for ~€80m, paid by instalments to fit #AFC budget. 5yr deal, agent agreement still needed but set to be closed in next 24/48hrs. Napoli also have agreement with #LOSC but agent rejected proposal

Lille are happy to receive the Pepe fee over a number of future seasons as it means they will comply with the financial checks enforced by the national organisation responsible for monitoring and overseeing football clubs in France.

On the move itself, after it was announced on Wednesday evening: “Being here is very emotional, I have come a long way, struggled a lot and so signing for this great club is a big reward. It was important to make the right decision and I’m convinced Arsenal is the right choice.”

Highly-rated teenage defender William Saliba will spend the 2019/20 campaign back with Saint-Etienne after agreeing a £27m move, so Pepe and winger Gabriel Martinelli (£6m from Ituano) are their two immediate first-team players.

Who is Nicolas Pepe?

The 24-year-old, who has 13 international caps with his native Ivory Coast, set Ligue 1 alight with 22 goals and 11 assists last season. Those goal contribution numbers were only bettered by PSG’s Kylian Mbappe in France’s top-flight, who has already asserted himself among the world’s best players at just 20.

Pepe, capable of playing on either flank and also as a centre-forward, started his career with Poitiers before joining Angers and making his mark before an upgrade also came his way. Lille signed him for £9m two summers ago and all things considered, this will be a bittersweet feeling for them – massive profits for a prized asset they were resigned to losing at some stage.

Napoli, Bayern Munich and Liverpool were all heavily linked, though Arsenal – the only club that cannot offer Champions League football next season – have come out on top. He’s a left-footed player who tends to operate from the right-hand side, though it’s unlikely that versatility will really be tested much given the lengths they have gone to secure his services.

His new boss Unai Emery was understandably pleased to have signed his man, saying: “Nicolas is a highly-rated and talented winger, who was wanted by many of Europe’s top teams.

Signing a top-class winger has been one of our key objectives in this transfer window and I’m delighted he’s joining. He will add pace, power and creativity, with the aim of bringing more goals to our team.”

Pepe featured during their African Cup of Nations campaign, as Les Éléphants were eliminated by eventual winners Algeria with a dramatic 5-4 penalty shootout victory at the quarter-final stage. He was a surprise omission on that evening, with Crystal Palace’s Wilfried Zaha – another strong Arsenal target – starting in his place.

What does this move mean?

This deal means that although Emery will still be looking to add defensive acquisitions before the deadline on August 8, any slight chance Zaha had of a dream move to Arsenal this summer is now certainly off the cards.

The Gunners previously saw a £40m bid rejected last month, while Everton also had an improved offer rebuffed before publicly denying their reported attempts at a renewed bid with swap players involved. It appears increasingly likely that Zaha may have to venture abroad if he’s to play continental football this season.