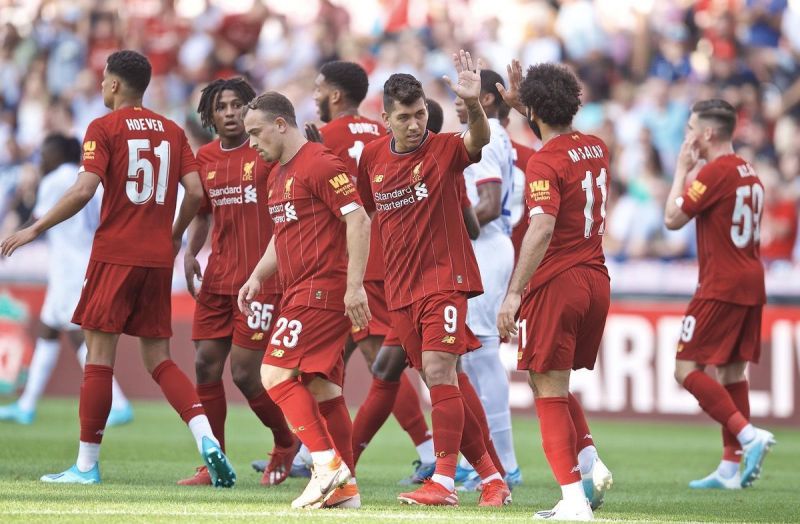 Goals from Roberto Firmino, a Joachim Andersen own goal and Harry Wilson’s wonder-strike proved enough for Jurgen Klopp’s Liverpool as they recovered from an early deficit to finish their pre-season travels with a win in Switzerland against Ligue 1 side Lyon. Here are five talking points as the Reds finished their pre-season campaign with a morale-boosting win.

It was far from an impressive start though, as first-choice goalkeeper Alisson made a succession of errors before the deadlock was broken after just four minutes. He made a mess of a backpass, completely fumbling the ball which allowed Moussa Dembele a goalscoring chance in the area unchallenged. Panicking, he hauled down the forward and gave away a spot-kick – which Memphis Depay dispatched with aplomb.

That was as good as it got for Lyon though, as the Reds responded quickly despite an early period of nervy defensive moments. Firmino equalised after 17 minutes with a clever finish from a tight angle after promising work from Xherdan Shaqiri in the box saw the loose ball trickle into the Brazilian’s path.

Just four minutes later, Ki-Jana However earned an assist after drilling a teasing inswinging delivery from the right. Joachim Andersen got his angles all wrong and led with the wrong foot, slicing an attempted clearance into the far corner.

Both sides made substitutions aplenty at different stages over the 90 minutes but Harry Wilson doubled Liverpool’s lead after letting fly with a fantastic strike from 25 yards out on 53 minutes. It was one of his final moments of the evening and proved a decisive one, as a new-look Reds team took to the field for the final half-hour, holding out for a comfortable 3-1 win.

With league champions, Manchester City to come in Saturday’s Community Shield, their display would have given Klopp plenty of thought ahead of the traditional curtain-raiser this weekend. With all of that in mind, here’s a look at five talking points from Liverpool’s latest win:

#5 Last-chance for Lallana? Is there a future in the No. 6 role… 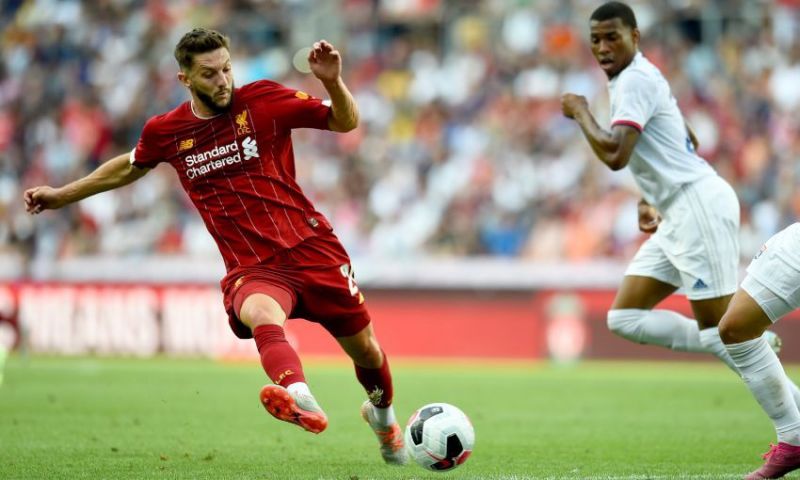 Utility man? Lallana has enjoyed an encouraging pre-season and needed to, given his uncertain future

If there’s anyone that needs an excellent 2019/20 campaign, it’s Adam Lallana. Now 31, the injury-prone Englishman has struggled to justify the high expectations placed on his shoulders after a £25m Southampton move. That was five years ago.

With just under a year left on his existing Liverpool deal, Lallana remains eager to fight for regular minutes under Klopp. Pre-season performances suggest his versatility will be tested, not least given the ever-increasing squad depth in midfield at the German’s disposal.

Alex Oxlade-Chamberlain‘s return to full fitness adds extra competition for places, while Naby Keïta is said to have finally shrugged off persistent injury issues and will be targeting a breakthrough campaign at Anfield this coming season.

On this occasion, he delivered an encouraging display and looked comfortable operating between the lines of a No. 6 and an No. 8. Linking the midfield and attack well, he stood out with purposeful passing and an infectious work rate that many haven’t usually seen from him.

But given the aforementioned factors, some supporters and journalists alike are ignoring one crucial thing: it’s still only pre-season. Too early to judge player development, Lallana hasn’t just suddenly made significant strides to progress in more of a holding-midfield role like Fabinho because of an eye-catching performance during a low-pressure environment vs. Lyon.

Recency bias is a recurring theme here too, as those same fans and critics seem to have forgotten all the criticism left at Lallana’s door after sub-par performances in the past.

Determination to stand out is one thing, but he hasn’t transformed into a world-class player overnight – even if LFCTV commentators try to convince you otherwise. I get it, this is potentially his final chance to cement a Liverpool future and everyone wants him to do well. None more so than me, to prove me wrong. But temper your expectations, is all. 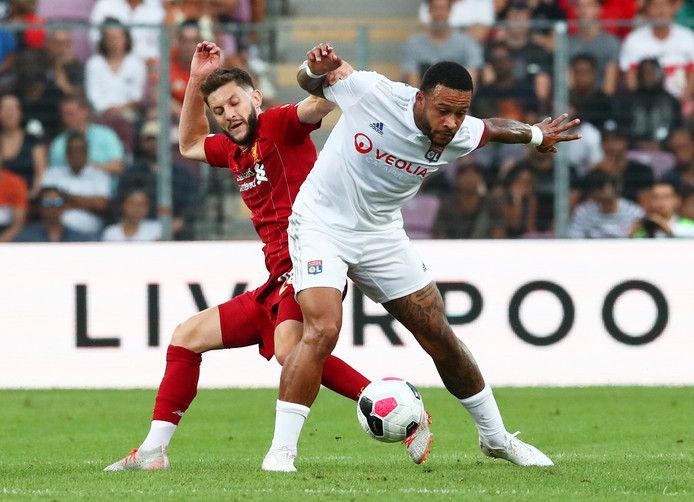 If there was anything that Depay needed to start this game, it was a pick-me-up. Alisson’s blunder gifted him one and yet again, the talented Dutchman faded as Liverpool grew in confidence and began to control proceedings.

It was a frustrating display before he was replaced after 63 minutes, with many suggesting they forgot he was even still on the pitch after the two sides returned for the second half. When he tried to make things happen, Depay was embroiled in a few honest but forceful challenges with Hoever, which saw him looking bemused by his younger compatriot on the turf.

It felt like that was his cue to stop trying, as he didn’t get much success in possession after that and was fairly subdued afterwards. For someone who is supposedly Lyon’s best player, Depay doesn’t tend to do himself any favours. He has impressed in flashes over the past two seasons with OL but appeared increasingly intent on securing a big-money summer move.

It’s understandable in a market which demands quality forwards, thoughts are undecided on Memphis. On his day, he can be fearsome and an ever-present threat to any opposition defence. But that’s the crucial phrase because, for a multitude of reasons, his blistering form has become more infrequent and measured at Lyon.

Nabil Fekir’s departure for Real Betis last month will not have helped matters, while Houssem Aouar emerges as their only bonafide playmaker – though fellow forwards Bertrand Traoré and Moussa Dembélé appear more happy to help themselves rather than their teammates. It’s a difficult situation for Depay but remains one he must respond accordingly to, justifying the hype once and for all.

#3 Alisson’s errors creep back into play 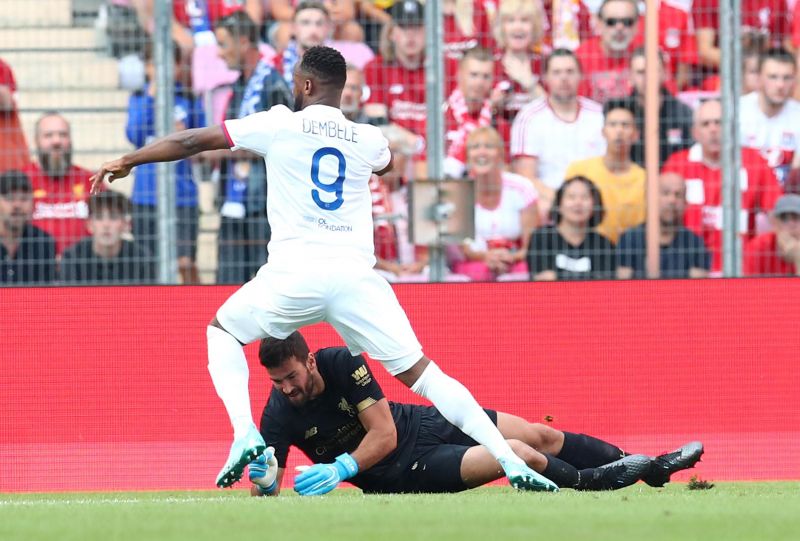 Alisson Becker and Roberto Firmino made their club returns on this occasion and while one scored an impressive equaliser during an encouraging cameo, the other was forced to recover from another rather grim individual mistake which gifted Lyon the lead.

Alisson, a surprise snub from FIFA’s ten-man shortlist for World Player of the Year on Wednesday, has been heralded as one of the world’s best goalkeepers since his switch to Anfield last summer and despite a few hairy moments, done nothing but enhance an impressive reputation.

An integral figure as Liverpool won their sixth Champions League title in June, he played every game and kept five clean sheets as Brazil won the Copa America last month too. So you could excuse the collective surprise when he made a serious mess of a backpass and gifted Moussa Dembele an easily preventable chance so early on in their final pre-season friendly.

He reacted in disbelief once the referee awarded a spot-kick and despite replays showing contact, if at all, was minimal, he gave Dembele a chance to go down with a rush-of-blood lunge at the ball. Had he stayed firm and held his position even in that situation, it’s unlikely the 23-year-old would have converted the chance with such little time to react.

He had no chance at saving Depay’s follow-up penalty but his distribution and body language was fairly ruffled for a sustained period afterwards. Understandable, he would have been reeling after conceding such a poor goal, but he eventually calmed down and was able to settle as Liverpool saved his blushes before being replaced by Simon Mignolet just after the hour mark.

From the Premier league’s top six sides, only Manchester City’s Ederson (58) made less saves than his 76 last term and he’s not immune to an individual mistake either. All Klopp can hope for is those forgettable moments are ironed out of his system before they face Norwich on August 9.

#2 Lyon with plenty of work still to do 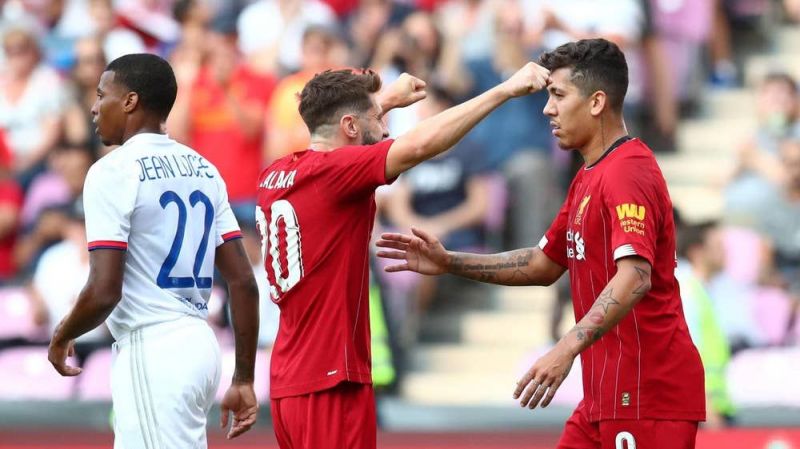 It’s fair to say that Sylvinho certainly has his work cut out as Lyon‘s new manager. The 45-year-old, formerly of Arsenal and Barcelona as a player, is venturing into his first managerial job and the timing couldn’t be more volatile with Les Gones.

After all, overseeing the departures of three prized possessions in Ferland Mendy, Tanguy Ndombele and Nabil Fekir certainly would have hurt. He signed a two-year deal last month but will need to rebuild their squad, which cannot always be an immediate solution even with promising summer signings.

Thiago Mendes (£20m) and Jean Lucas (£7m) have bolstered their midfield ranks, though the latter is an unknown quantity and they kept Lucas Tousart to partner Aouar as part of their midfield next season.

Even with £27.3m club-record signing Joachim Andersen’s arrival, the backline remains shaky. This unconvincing defensive display is evidence of that and supporters continue to list a handful of names they expect to be sold this summer, with the Ligue 1 deadline still a full month away on September 2.

There should be more transfer movement, both incomings and departures, but Sylvinho certainly has a tricky test on his hands if they are to maintain their top-three standing in France while improving upon a plucky Champions League campaign last year. 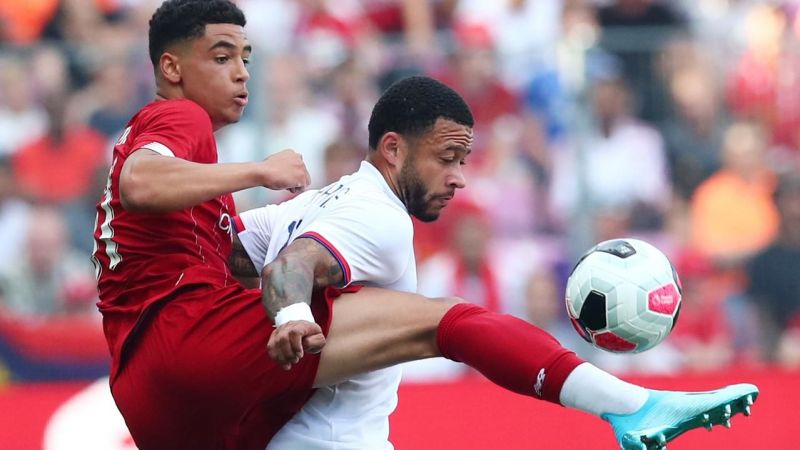 Just hours after penning his first professional contract on a long-term deal, Ki-Jana Hoever stood out as Liverpool’s best performer and again didn’t look out of place in a backline packed with different storylines.

The 17-year-old’s path has just begun on Merseyside after vowing to make the club proud and repaying their faith in his ability. Operating at right-back, he impressed with his tough-tackling nature and was unafraid to bomb forward with a handful of teasing deliveries which posed questions of the Lyon backline before creating the assist for Andersen’s own goal.

He was quoted as saying: “I need to be realistic – I hope to make some first-team minutes this year, of course, but I know I will probably play more games for the U23s. I will just train hard with the first-team, show them what I can do and if there is a chance I will be ready. That’s what I am hoping for.”

Having made his senior debut after replacing an injured Dejan Lovren against Wolves in the FA Cup back in January, then still only 16, the talented Dutchman is refreshing unfazed and will only keep improving as part of Klopp’s plan to integrate their talented teenagers into the first-team picture.

He kept Depay at bay, made some incisive runs in support of his more forward-minded teammates and despite being booked for an overzealous sliding tackle, that crucially didn’t stop him from persisting in his efforts to frustrate a tricky Lyon side.

Yasser Larouci, who has made a full recovery from a horror tackle against Sevilla last week, impressed in stages on the opposite side to Hoever. His one-on-one defending was tested and you can tell he too will benefit, learning from close quarters under supervision between squads. Defensively he was tested, which is important for a young fullback with experience still to gain – though the 18-year-old didn’t seem out of place which is always good to see.

Bobby Duncan and Adam Lewis linked up well to eyecatching effect, while summer signing Harvey Elliott also caught the eye when introduced midway through the second-half. Meanwhile, Harry Wilson popped up with a stunning strike from distance to double their lead before their mass substitutions were complete.

It was typical of the playmaker, who enjoyed a successful loan spell at Championship side Derby County last season, though his Liverpool future remains uncertain. Bournemouth and Newcastle are said to be among the top-flight clubs ready to complete a move for the Welshman, though Klopp is keeping his cards close to his chest on whether he’ll depart permanently before the season begins next weekend.