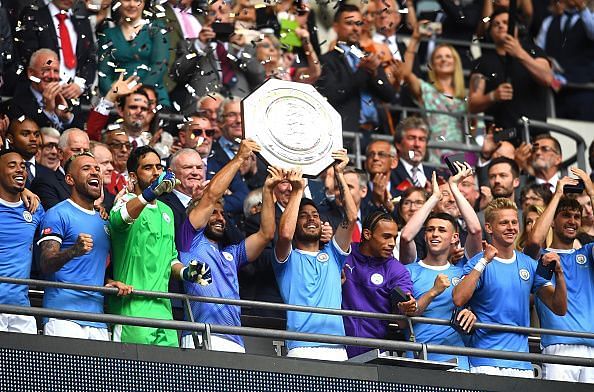 New season, same old Manchester City: Their domestic dominance has resumed as they lifted the season’s first piece of silverware with a 5-4 penalty shootout win over Premier League runners-up Liverpool for the Community Shield at Wembley.

Goals from Raheem Sterling and Joel Matip saw the two sides finely poised after 90 minutes during a less-than-friendly encounter between England’s top two sides, with just a week before the new campaign begins.

Liverpool midfielder Georginio Wijnaldum saw his spot-kick saved in the resulting shootout by an inspired Claudio Bravo, which proved pivotal as Gabriel Jesus dispatched past compatriot Alisson to seal their narrow victory. With all of that in mind, here’s a look at five talking points from an intriguing encounter which could have swung either way:

#5 Raheem Sterling with divisive display against his former side 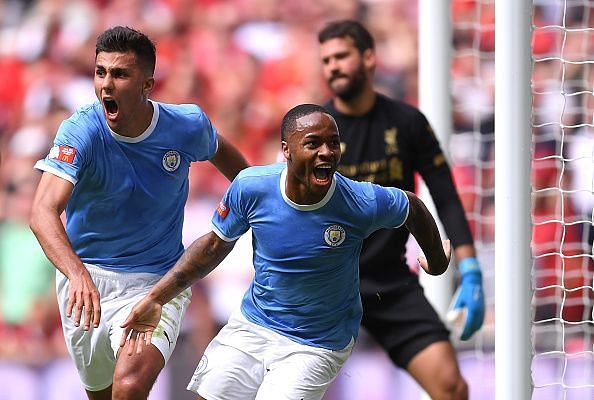 Sterling finished a well-worked move to break the deadlock against his former club after 12 minutes. A cute finish from close-range, it was one that Alisson should have done better to keep out – but the type of goal that you wouldn’t complain scoring either way.

On his 11th appearance against his former side, he finally netted his first goal and this should have propelled him further during the type of encounter where matchwinning moments are often at a premium.

However perhaps at a different stage in the campaign, Raheem would have netted a hat-trick on this occasion. Instead he settled for one, squandered a promising opportunity to essentially kill off Liverpool’s comeback hopes and it almost cost them the victory altogether.

At times he threatened with trademark slaloming runs into the box, excellent dribbling and the like – though at crucial moments his decision-making wasn’t razor-sharp. That indecisiveness is why many continue to criticise, while others are still aware there’s more to come from a player who enjoyed his most productive season to date in 2018/19.

He’s at his best when faced with challenges he can respond to instinctively, whether that be a promising opportunity or otherwise. When presented too much time to think, he often tends to choose the wrong option or rushes into a mistake he wouldn’t usually make under pressure.

#4 Mohamed Salah bright but crucially wasteful when it mattered most 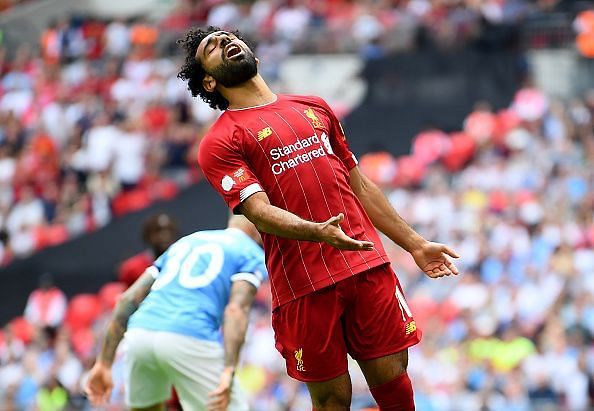 Mohamed Salah meanwhile, was Liverpool’s brightest spark in a real game of two halves for Jurgen Klopp’s side. However, despite flashes of the brilliant skill and movement to bamboozle City’s backline in transition, Salah endured a frustrating day in front of goal.

Similar to how he was playing during the second-half of last season, Salah was often selfish and seemed overly keen on going it alone where possible. That can be justified when you’re on top form, scoring goals and having success galore but Salah was ridiculously wasteful in front of goal. Rather than to see that and take a backseat, it fuelled further motivation within him to finally beat an impressive Claudio Bravo and the City side.

His movement was brilliant and he ended up a nuisance for City to contend with, but he hit the woodwork twice and ended up taking 10 of the Reds’ 17 shots over the 90 minutes. For a world-class forward, that’s simply not efficient nor sustainable enough to justify such numbers – while being dispossessed on seven occasions and failing to really set the tone with Roberto Firmino-type pressing out of possession.

Admittedly, the season hasn’t truly begun yet so you can make the argument that he’s yet to find his goalscoring range. However, time waits for no man and after a frustrating AFCON campaign with Egypt last month, he’ll be longing for more club silverware going forward. As their talisman, he must start firing and soon – not least with the quality of promising chances that he squandered on this occasion. 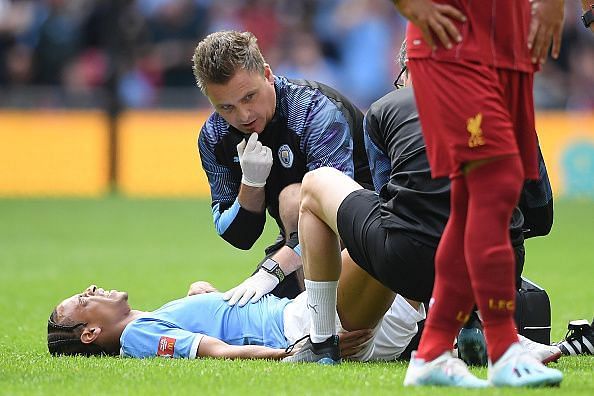 The incessant speculation linking Leroy Sane with a return to the Bundesliga continues to intensify, even after the winger limped off in serious discomfort 11 minutes in on this occasion. According to German news outlets, Sane shouldn’t have even featured – in an attempt to save himself for prospective future employers Bayern Munich – but the 23-year-old’s future remains undecided for now.

It’s a shame though, that his game was cut short in such abrupt fashion after leaving Trent Alexander-Arnold for dead on a promising break. Unceremoniously hauled down by the fullback, he landed awkwardly and buckled under his weight which certainly didn’t look good on the replays.

There were initial whispers that he might have sustained serious ACL damage, or a long-term knee injury, but we’ll have to patiently wait and see. After the excellent campaign he had in 18/19, even amidst his frustrations for both club and country, a long injury layoff is the last thing he needs.

Whether or not he’ll continue playing under Pep Guardiola for much longer remains to be seen if Bayern table a bid City cannot refuse, but they obviously want to keep him and they’d be silly to sell in any case. 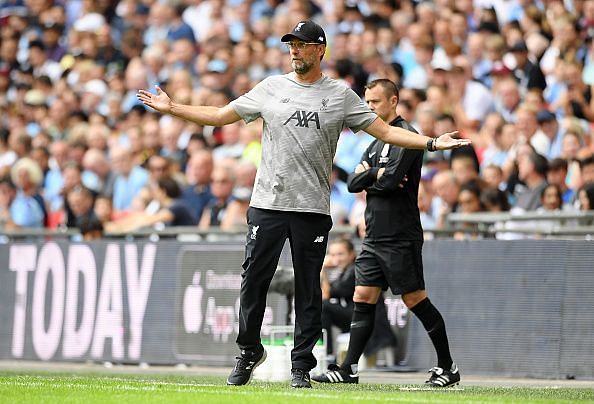 Klopp was often animated in a competitive, telling defeat by their fierce rivals on this occasion

Liverpool were second-best and rightly trailing going into the half-time interval, so whatever Klopp said at the break certainly did the trick. They responded well, buzzed around persistently in their attempts to disrupt City’s rhythm and it ultimately paid off – so much so that Sterling squandered a match-defining chance, Virgil van Dijk was inches away from an equaliser and Kyle Walker‘s acrobatic goalline clearance prevented a stoppage-time winner.

You could see as much in the players’ faces, City were tiring and Liverpool were increasingly energised. The fact they made five substitutions, to City’s two (sorry Phil Foden!) would have naturally played its part, but nonetheless the Reds were the better side in a second-half which could have swung either way.

City responded well to their pressure but given the amount of chances they were conceding, it was only a matter of time before Liverpool found a breakthrough. Alexander-Arnold’s set-piece deliveries were regularly hit deep into areas which proved harmless and the first time he hit one differently, they almost scored.

van Dijk’s neat assist for substitute Matip saw the momentum swing in their favour with just over 10 minutes to play, but City ultimately survived thanks to Liverpool’s profligacy and an acrobatic Walker. Klopp knows their pre-season campaign has been difficult for different reasons but once the proper season starts, there will be no time for excuses. Time to knuckle down. 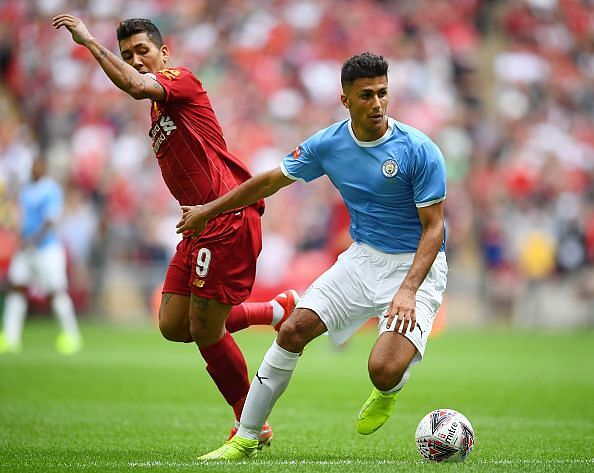 Rodri was imposing, composed in possession and unafraid of midfield battles against a determined side

Imposing and comfortable in possession, Rodri already looks the part in City’s midfield. The litmus test will show its true colours once the season begins but their £63m man was ever-present as the base for attacks and protector of a solid backline who have error-prone tendencies as we begin the post-Vincent Kompany era.

Constantly available to receive possession in pockets of space, he had 73 touches and recycled the ball well. 91.9% pass completion rate on 62 passes was only bettered by Salah (95.8% on 24) while winning three clearances, two aerial duels and tackles as well as one interception over the 90 minutes.

Tidy and composed, he didn’t shy away from challenging the likes of Jordan Henderson and Fabinhowhenever they approached him. He won possession more times than any of his teammates, read the game well and provided some much-needed bite in a City midfield renowned for their technical brilliance.

The only blip on this showing was a heavy touch from Kyle Walker’s attempted pass out of defence, which slipped pressing Liverpool players forward through on-goal. The chance was squandered but an early reminder that concentration is paramount at all times, even in the most harmless of situations where teammates might take a second or two extra before passing – increasing the chance of error under pressure.

With a player like him there, it allows Kevin de Bruyne and Bernardo Silva more creative freedom to roam forward while lessening the Citizens’ reliance on Fernandinho, who is now 34 and has less than a year left on his existing deal at Eastlands.