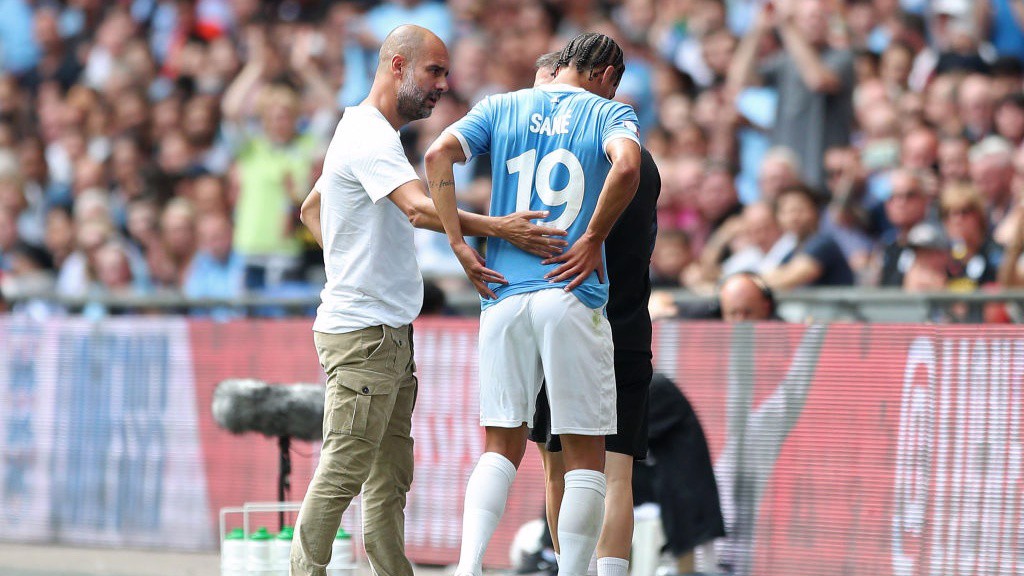 The news has been confirmed and it’s the worst possible outcome: key winger Leroy Sane will be sidelined until early 2020 after scans showed he tore his anterior cruciate ligament during Manchester City’s Community Shield win over Liverpool last Sunday.

Despite an encouraging 10-minute spell at Wembley last week, Sane limped off in agony after an overzealous challenge by Trent Alexander-Arnold – having landed awkwardly on his right knee.

In the immediate aftermath of their penalty shootout win, I said the injury didn’t look good on first viewing and given this game was a precursor to the 2019/20 campaign, a very worrying sign.

This week, the 23-year-old Germany international underwent testing throughout the week to investigate the extent of his injury. Next week, he’s set to have surgery to repair the damage at the clinic of Ramon Cugat in Barcelona (per The Guardian).

During his pre-match press conference ahead of their trip to east London on Saturday, Pep Guardiola revealed disappointment at the news.

“Normally this kind of injury is six or seven months – hopefully in February or March, he can be back. It’s bad news as in three seasons, we’ve had three ACLs [Benjamin Mendy and Ilkay Gundogan previously].

He’s young and he will recover well hopefully in terms of the surgery. All the people will help him, though he will feel alone at some moments and we must help him feel as comfortable as possible.”

Sane was heavily targeted by Bundesliga champions Bayern Munich as the Bavarians were hoping they could persuade him into returning to Germany’s top-flight. Despite tireless speculation suggesting a big-money switch was all but done, Pep defiantly refuted those claims.

“I didn’t think about him leaving – I always said he’s our player and he didn’t tell me he wanted to leave. He was always ours.”

Bayern will now focus on other targets, after failed approaches for Sane and Chelsea’s Callum Hudson-Odoi – who is close to signing improved terms in west London. Inter Milan’s Ivan Perisic is reportedly on the verge of a season-long loan move (option to buy included).

This setback will mean increased responsibility on the shoulders of Riyad Mahrez, fresh off an influential African Cup of Nations campaign with Algeria – captaining them to their first title in 27 years last month. He struggled for consistency in 18/19 despite flashes of the ability which saw them sign him for £60m last summer, so time will tell whether he can take advantage now.