Defending champions Manchester City turned on the style during an inspired second-half display to dismantle an encouraging West Ham display in their season-opener, ultimately winning 5-0 at the London Stadium.

Raheem Sterling netted his third career hat-trick, while there were also goals from Gabriel Jesus and substitute Sergio Aguero as the Citizens flexed their creative muscle to devastating effect against Manuel Pellegrini’s side.

West Ham, buoyed by six acquisitions and £71m spent this summer, enjoyed a positive start to proceedings in east London but City’s pressure ultimately told after 25 minutes. As time wore on, they only continued exploiting a vulnerable Hammers backline while keeping a clean sheet despite conceding a few promising chances in an impressive victory.

VAR made its Premier League debut: overturning a goal and causing a penalty to be retaken for the first time in the 2019/20 campaign, causing controversy and confusion aplenty among some players in the process. With all of that in mind, here’s a look at five hits and flops from an intriguing watch: 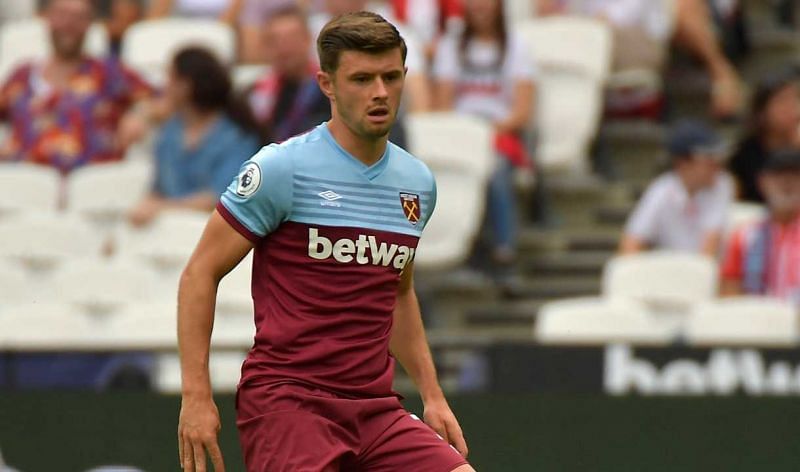 Cresswell struggled defensively and was exploited against a rampant City attack

As previously mentioned, West Ham started brightly and matched City in the early stages. Naturally this gave supporters plenty of optimism but it was short-lived to say the least. Aaron Cresswell’s inability to effectively defend up against Riyad Mahrez and an overlapping Kyle Walker proved pivotal as the visitors gradually asserted their dominance.

Granted, it’s easier said than done. But it’s not as though the 29-year-old doesn’t have ample top-flight experience – 158 league games and counting – nor that the combination play between Mahrez and Walker isn’t preventable.

He should have had more support from teammates further forward but even still, Mahrez left him for dead on far too many occasions and this only boosted the Algerian’s confidence to roam forward. So much so that Walker too was flying forward with regularity, because they knew they could exploit his tentative nature out of possession.

Mahrez could have scored before City’s first goal, which too came directly down his side. Despite a fortuitous deflection into Jesus’ path, he should have done more to prevent Walker flying past him (with a head start!) into the box to deliver the goal-creating cross.

Only Fabianski and Michail Antonio – who came off at half-time – had worse than his 74.2% pass completion rate, while only completing one tackle and block over the 90 minutes. 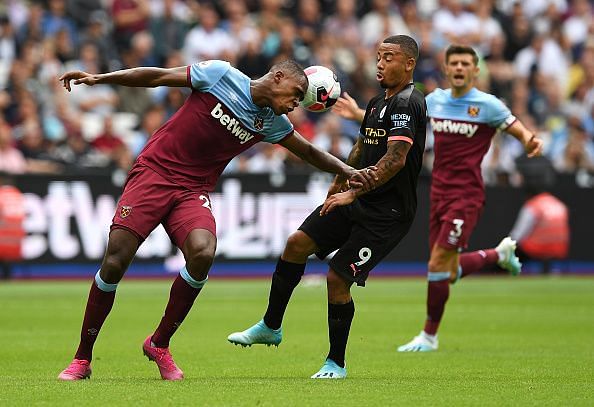 Fresh from an impressive Copa America campaign with Brazil last month, Jesus picked up where he left off with the Selecao in this affair. Starting in the lone centre-forward role as Aguero watched on from the substitutes’ bench, the 22-year-old again proved why he too has an important part to play in City’s juggernaut.

Clever hold-up play and linking midfield with attack well is what he’s capable of, so much so that he’s prepared to drop deeper to receive possession. Surprisingly, he only had 18 touches in 70-odd minutes on the pitch but with 90.9% pass accuracy, he won two fouls and was assured on-the-ball.

He reacted quickly to slot home from close-range as the hosts were caught ball-watching and duly made them pay. The most encouraging thing about him is there’s still areas to improve upon and that would’ve been the underlying case when critiquing his missed opportunity on the stroke of half-time.

West Ham dithered in possession, goalkeeper Lukasz Fabianski was in no man’s land and with the goal gaping, he rushed the effort while failing to apply clean contact on his eventual strike.

He should have completed his brace after a nonchalant close-range finish following good work again by Sterling, though VAR controversially ruled the goal out for offside. Nonetheless, his all-round display was more productive than talisman Aguero after he’d been replaced midway through the second-half. That’s got to be something, right? 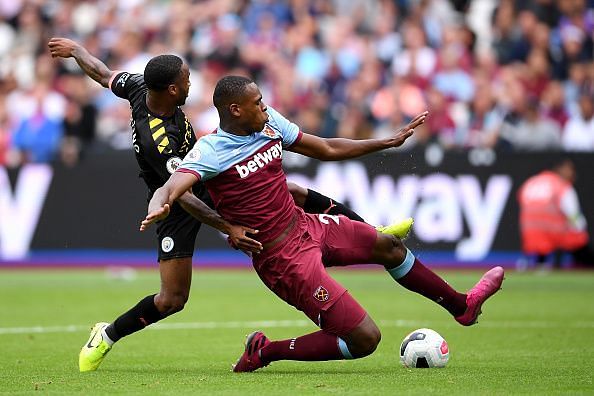 Diop endured a tough afternoon’s work against Sterling and co

A toss-up between Fabian Balbuena and Diop for the game’s worst performer, given his involvement in City’s rampant second-half display, this berth must go to the Frenchman.

He, like the rest of West Ham’s team, were fairly solid early on. That soon changed after Walker displayed Olympic-type pace to leave Cresswell in his dust after overlapping Mahrez down the flank and the hosts were simply stunned.

Diop reacted too slowly in transition and found himself having to recover as City broke at speed, his sliding block attempted inadvertently teed up Jesus to his left and made the Brazilian’s job easier.

de Bruyne bypassed Balbuena like he wasn’t there for City’s second, though Diop’s deliberate attempt to catch Jesus offside proved futile. VAR kept the scores at 2-0, though he conceded a penalty for their fourth goal by upending Mahrez as the winger attempted to weave beyond him in the box.

Then for goal number five, he was their deepest defender playing Sterling onside and crucially didn’t intercept Mahrez’s pass into the Englishman who advanced through on-goal unchallenged before leaving Fabianski looking silly to seal his hat-trick. With two interceptions and clearances, one tackle and block completed, Diop was kept busy but was simply overrun as part of an underwhelming defensive display. 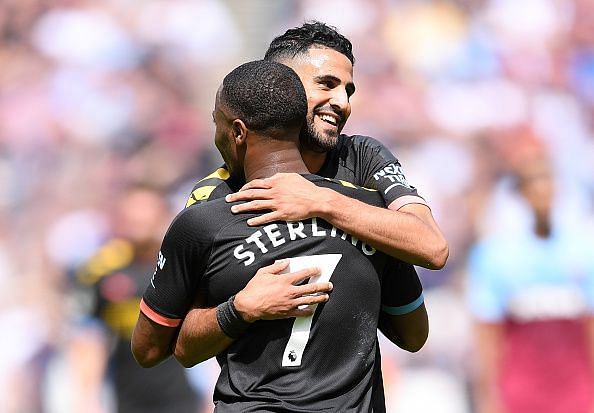 In the aftermath of Leroy Sane‘s serious ACL injury, 2019/20 has now become Riyad Mahrez‘s most important campaign to date. He endured some struggles following his £60m Leicester switch with consistency the biggest question mark, not least against top sides.

Sane will be sidelined until February-March at the earliest, meaning more regular minutes and opportunities for the Algerian to shine. Having spearheaded his nation to their first African Cup of Nations title in 29 years last month, the 28-year-old will have ample confidence to improve upon a season where he netted seven goals and created four assists in 27 league appearances last term.

For a player of his ability, those numbers simply aren’t good enough and it’s why he has divided opinion on Eastlands since the big-money switch. New summer acquisition Rodri (£63m) has since broken their club-record transfer fee, though he’s six years younger and excels in more of a niche role than Mahrez ever will.

However, the saying is start as you mean to go on. Mahrez created two assists and probably should’ve added his name to the scoresheet too during a game where West Ham’s defensive deficiencies were exposed by the champions, who weren’t even at full-strength.

It was his beautifully-weighted lofted pass which fed Sterling’s intelligent run for his second of the afternoon, before winning the penalty for their fourth goal after baiting Issa Diop into a needless challenge.

Then, he teed up Sterling again – this time to complete his hat-trick in stoppage-time to make it 5-0. He now has 12 goals and 14 assists in 45 appearances (across all comps) for City, statistics he’ll be looking to improve upon quickly as part of a dangerous attack packed with chances galore. 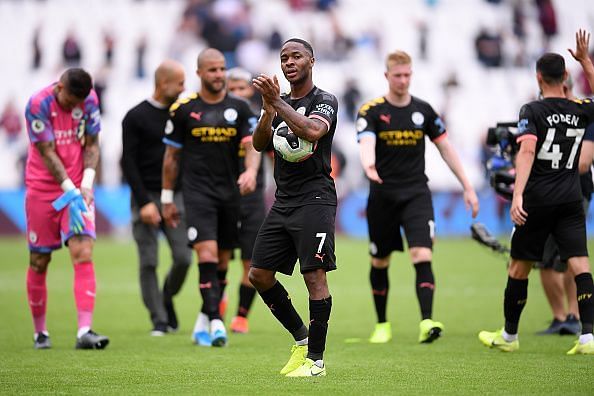 How many times will you see Sterling top this list over the course of this season? If he continues playing like this in the final third, expect it to be a regular occurrence.

We’ve said time and again that Raheem continues improving and for a player who turns 25 in December, it seems he’s been around forever. His decision-making and finishing were both razor-sharp on this occasion during a second-half packed with chances, against a West Ham backline who seemed there for the taking.

Kevin de Bruyne displayed moments of individual brilliance as usual before recording his first assist of the new campaign, launching a marauding forward run before passing across to Sterling in space. He slotted home into the bottom corner, making his finish look easier than it was in the process.

VAR cruelly ruled out an assist after he teed up Jesus but was adjudged to have been marginally offside, even though new rules state player arms and hands are not included when judging offside positions. Sterling’s movement proved pivotal as Mahrez found him with an excellent lofted pass. His deft chip over an onrushing Lukasz Fabianski to finish the move in style was his 50th City league goal.

On for a hat-trick, he was understandably frustrated when substitute Aguero asserted himself as their spot-kick taker after Mahrez won the penalty. But importantly, that only fuelled his fire to add another on the scoresheet before full-time, applying the finishing touch from close-range in stoppage-time, leaving Fabianski for dead.

After his goal in last Sunday’s Community Shield win, he now has a Premier League hat-trick to kick off the new season in style with. Not bad at all!