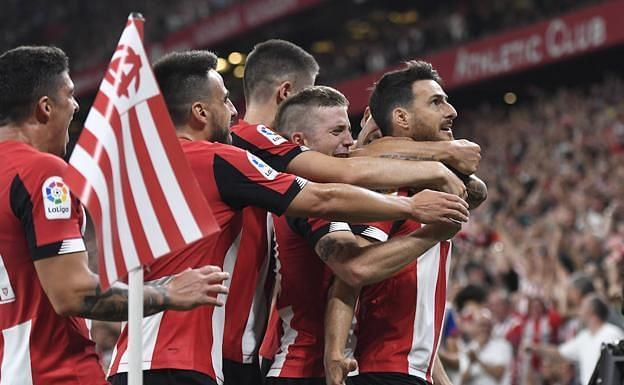 Aritz Aduriz came off the substitutes’ bench and instantly turned matchwinner for Athletic Bilbao with a brilliant scissor-kick strike to stun a lacklustre Barcelona side 1-0 late on as the 2019/20 La Liga campaign kicked off in style at San Mamés.

The defending champions started without talisman Lionel Messi while centre-forward Luis Suárez limped off before half-time – having hit the post from close-range after Unai López’s mistake in possession.

Iñaki Williams came close on a handful of occasions for the hosts, while substitute Rafinha forced Spain under-21 goalkeeper Unai Simón into an excellent reflex save just before the break but it looked certain to finish a goalless draw.

Aduriz, who is set to retire at the season’s end, replaced Williams with two minutes plus stoppages to play. Within a minute of being introduced, he wheeled away to celebrate his superb finish which left Marc-Andre ter Stegen helpless. With that in mind, here’s a look at player ratings from a memorable season-opener in Bilbao:

Didn’t have much to do in the first-half, before producing an excellent reflex save to tip Rafinha’s goalbound effort onto the crossbar. Slightly more busy under waves of sustained pressure in the second-half, but an accomplished display and deservedly kept a clean sheet to start the new campaign.

Dangerous on the overlap and left Jordi Alba in his wake a few too many times. Should have had an assist to his name before half-time after teeing up Raúl Garcia, though the eventual effort was tame and easily smothered.

Eventually earned an assist after delivering a looping cross which Aduriz reacted quickest to, finishing in spectacular fashion late on.

Booked in the second-half for a cynical block on Rakitic, which was truly a silly foul in transition that he didn’t need to make. Thankfully for him, he wasn’t targeted and kept his cool during a largely solid defensive effort from the hosts.

Went about his defensive work quietly alongside Núñez but both were prepared to put their body on the line to keep a hard-earned clean sheet. He made two clearances, one tackle, block and interception but the main criticism was his poor passing (68.2% completion rate)

Displayed his quality on both sides of the pitch – teeing up Inaki and looking threatening on counter-attacking moves, while tenacious in the tackle when called upon as Barca aimed to grow into the game.

Ultimately though, his end product in the final third lacked consistency under pressure, otherwise he’d have earned a higher rating here too. 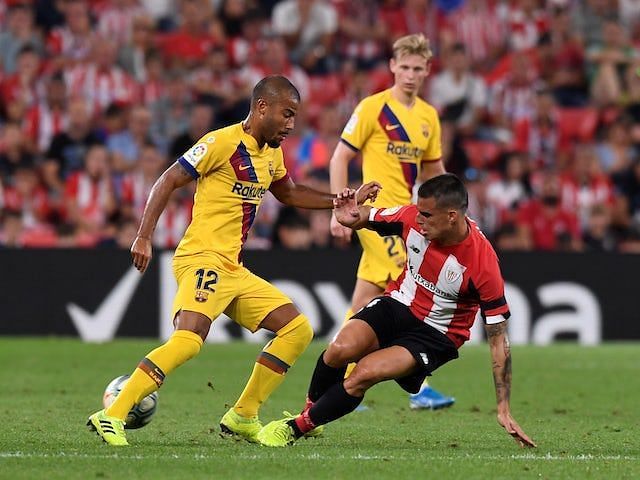 Reacted well when called upon to stifle Barca out of possession and sweep up loose passes, was kept busy but relished the challenge against a disjointed Barcelona midfield with talented players but seemingly little cohesion between them. Won nine duels while completing five clearances, three tackles and two interceptions over the 90 minutes.

On his first appearance as Bilbao captain, Muniain delivered a decent display – but one leaving fans hoping for more to come in future. Aware of Barca’s threats, he was more focused defensively and this wasn’t going to be the game to watch his creative abilities shine through.

Did well to win free-kicks and relieve pressure upon his teammates, while also getting stuck in when out of possession. Won 10 duels, possession back on four occasions, completed two dribbles and created a key pass during a busy evening on both ends of the pitch.

Headed over early on from a promising set-piece delivery and it rather typified his game in truth. Missed another opening after weak contact on eventual shot, though he harried and closed down passes well out of possession and did his utmost to frustrate Barca.

Tested ter Stegen from distance courtesy of a respectable but audacious effort, before his blushes were saved by the post after inadvertently teeing up Suarez with a backpass. Solid but unspectacular display before being replaced late on.

Ran tirelessly down the wing, making a number of troublesome runs into the final third, while providing defensive cover for Capa behind him to prove an ever-present thorn for Griezmann to contend with. However, questions over his creative efficiency continue: he lost possession on ten occasions and had just 55.6% pass completion success before being replaced. 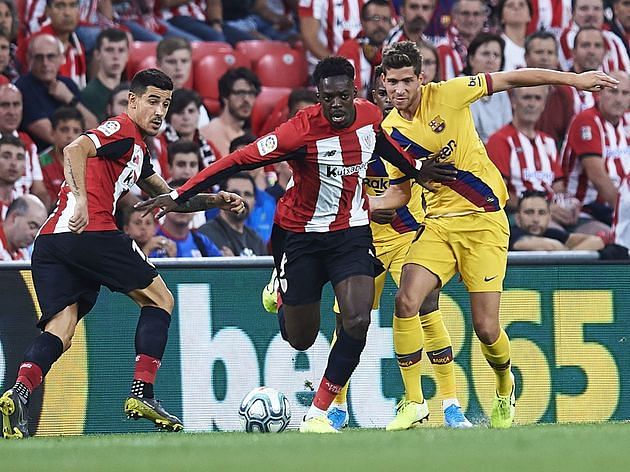 Inaki worked tirelessly, both in-and-out of possession, to create chances from nothing for Bilbao

The hosts’ key danger man. Stretched Alba and Clement Lenglet throughout, tested ter Stegen from various angles but will naturally be disappointed not to have broken the deadlock after three efforts on-goal.

Nonetheless, held up play well and brought others into play, working tirelessly off-the-ball and 9.5km distance run (after just 45 minutes!) reiterates that infectious work ethic from the forward. Decision to replace him with time winding down wasn’t well-received by home supporters, though Aduriz proved an inspired replacement late on.

The 19-year-old midfielder made his competitive debut to rapturous applause by the home support, replacing a jaded de Marcos after 65 minutes. Was forced into doing more defensive work than he would have liked ideally, but nonetheless didn’t seem out of place.

How could you not give Aduriz a ten? Came on with the scores finely poised at 0-0, seemingly the points would be shared in another draw between these two sides. Alas, the 38-year-old had other ideas – beating Nelson Semedo to Capa’s delivery before unleashing a brilliant scissor kick which flew into the bottom corner with aplomb.

The matchwinning goal means he has now scored in 15 successive La Liga seasons, joining none other than Lionel Messi as the only players to do so. A fantastic start to his farewell campaign as a professional. 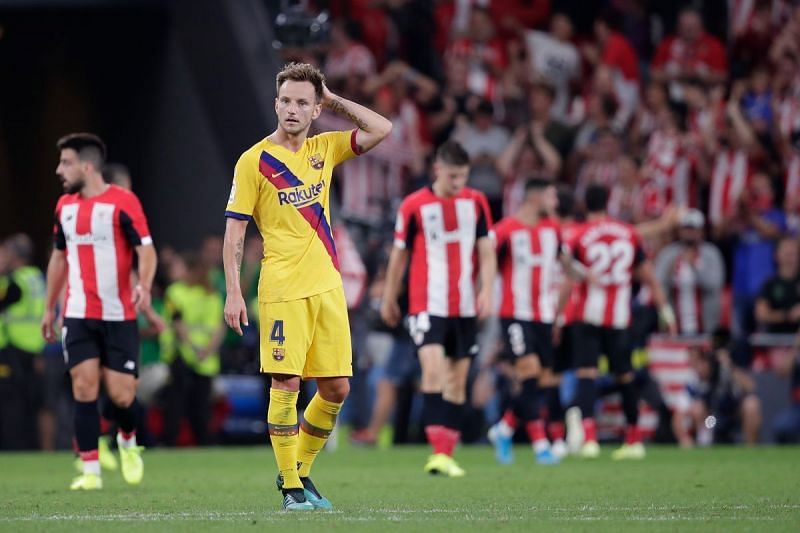 Forced into two smart saves in opening 15 minutes, thwarting Inaki from distance and again from close-range as Bilbao began much the better side. Made two further saves, distribution was composed as usual and he proved brave enough to claim an aerial delivery under pressure from Raúl García but helpless to stop Aduriz’s special strike in the dying minutes.

Just like Pique, Lenglet was kept occupied by Inaki’s ever-present threat on the counter-attack and his supporting cast too. One tackle, two clearances, seven duels won and 85.7% pass completion rate, he’ll ultimately be frustrated after squandering a big headed chance.

After 46 Barca appearances, he has two goals to his name. But with chances coming at a premium in tight, tough games like these, there’s still scope for improvement.

Was kept busy by Inaki et al and although recovery pace has never been the Spaniard’s forte, he defended well enough to lead by example as usual at the back. Made a number of crucial headed clearances and interceptions, though he probably could have done better to latch onto one of those teasing deliveries when unmarked in the box second-half.

Appeared lost without Messi ahead of him and was visibly discouraged by a lack of forward movement whenever he looked to overlap in a weird first-half. Things gradually improved after the interval, but his defensive frailties were again exposed and relinquished possession too cheaply (16 times over 90 minutes), a stat he will not want to see again.

Frustrating with his final ball and unconvincing out of possession, that was partly his own doing and equally that of his teammates after their sluggish start to proceedings continued.

Ultimately culpable for Aduriz’s matchwinner, caught ball-watching and reacted too late to the cross as it came in – which saw the forward beat him to the ball, which should have been cleared.

He started okay and to his credit, aimed to keep things ticking over in midfield, which was easier said than done given Bilbao’s pressing tactics out of possession. As a result, his passes (28, 90.3% completion rate) were often too heavy or demanded too much from his teammates. Replaced for a more experienced Rakitic at half-time. 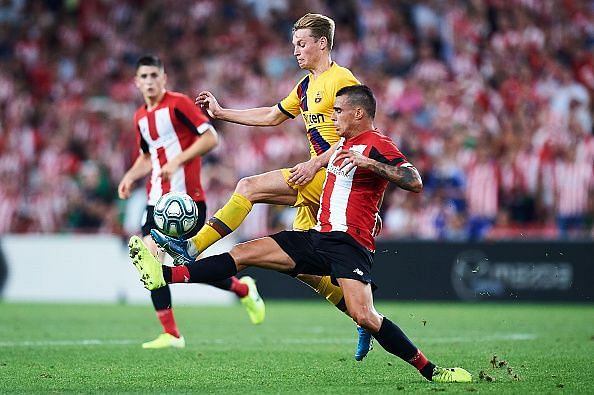 Went about his business, quietly doing the basics right on his La Liga debut but it was apparent early on that this midfield trio will not last long together. Regularly demanding the ball at his feet, looking to orchestrate but that proved tricky against a stubborn Bilbao side.

93.9% pass accuracy, 11 duels won, two interceptions and completed dribbles in 90 minutes. Next step in future is to not be so creatively shackled by those alongside him, but nonetheless there were some encouraging signs.

Started in his preferred role, partnering de Jong and Aleñá as part of Valverde’s midfield trio, but this wasn’t the type of game that suited such a position switch. Still worked hard defensively but differing responsibilities take some getting used to.

Griezmann dropped into deeper positions to receive the ball and was clearly frustrated playing in a role he’s not best suited to. Suárez’s injury saw him shifted to their lone centre-forward position, where he was increasingly isolated on a forgettable league debut for Barca.

With the goal gaping at his mercy, the Uruguayan struck the post after an inadvertent backpass went unpunished. It turns out he had already picked up an ankle knock moments before missing that chance, though the opportunity was squandered and proved match-defining as he limped off following futile medical treatment on the sidelines. 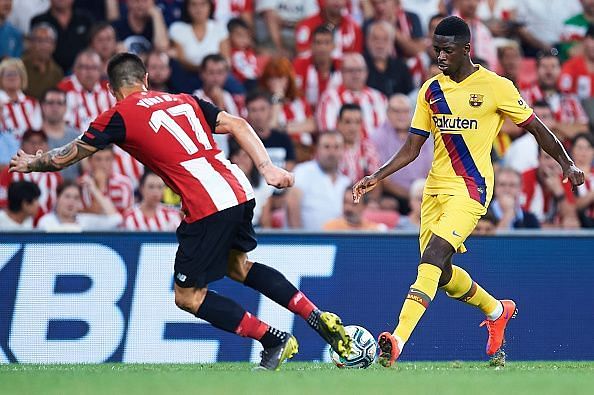 Dembele started sluggishly and endured another frustrating display against Bilbao

Started slowly and failed to retain possession high up the pitch, the Frenchman’s decision-making was questionable to say the least before switching wings after a lacklustre defensive effort in transition had been exploited.

Bright in flashes during the second-half, teeing up Rafinha with a clever reverse pass in particular, though those same individual moments of brilliance were few and too far between. No player on either side lost the ball more regularly than him over 90 minutes.

Replaced Suarez and immediately looked to create chances in midfield, drove forward and produced a brilliant strike destined for the top corner on the stroke of half-time. Unfortunate not to score that one, but should have done better to test Simón after Dembélé’s pass in the second-half before his levels gradually dropped.

Surprised he didn’t start ahead of Alena/Roberto in the heart of midfield but upon his introduction, Barca improved and gradually earned a foothold in the game. Unable to help them break the deadlock, but it was not for want of trying.