He scored ten minutes in with a deflected strike which slipped through Craig Cathcart’s legs before flicking off Craig Dawson on the way through. Evading Ben Foster’s attentions at his near post, it was a welcome finish having left Kiko Femenia trailing in his wake during the build-up.

The goal was provided courtesy of Lucas Digne’s clever lofted pass, one which split Watford’s backline and duly punished by the Brazilian winger – netting just his second league strike after leaving Shakthar for England’s top-flight this time last season.

Dominic Calvert-Lewin led by example working tirelessly out of possession in attack, while midfielder Jean-Philippe Gbamin delivered an encouraging display on his home debut for the Toffees.

Deulofeu a persistent pest as Watford aim to recover

Gerard Deulofeu, who was on-loan at Goodison himself five years ago, started brightly for the visitors and posed a real threat in transition. Javi Gracia’s men were eager to respond after a 3-0 home defeat by Brighton last weekend but their final ball was regularly disappointing despite time and again finding space to exploit.

Craig Dawson hit the crossbar from a dangerous corner, while Jordan Pickford was forced into a few precarious situations, denying Etienne Capoue before watching the Frenchman just inches away from netting an equaliser at the back post before half-time.

Two penalty shouts were waved away too, one apiece. Calvert-Lewin was hauled down by Dawson but referee Lee Mason waved play on, before Deulofeu was seemingly brought to ground by Yerry Mina during a promising opportunity at the other end.

On first viewing, both appeared like penalties. The latter was reviewed by VAR and a corner-kick eventually awarded, though multiple camera replays suggest Everton were wronged with their spot-kick appeal.

As the second-half began, Watford persisted in their attempts to equalise. Troy Deeney forced Jordan Pickford into a brave stop from point-blank range after an excellent Deulofeu pass but they were fortunate to not see their deficit worsen. 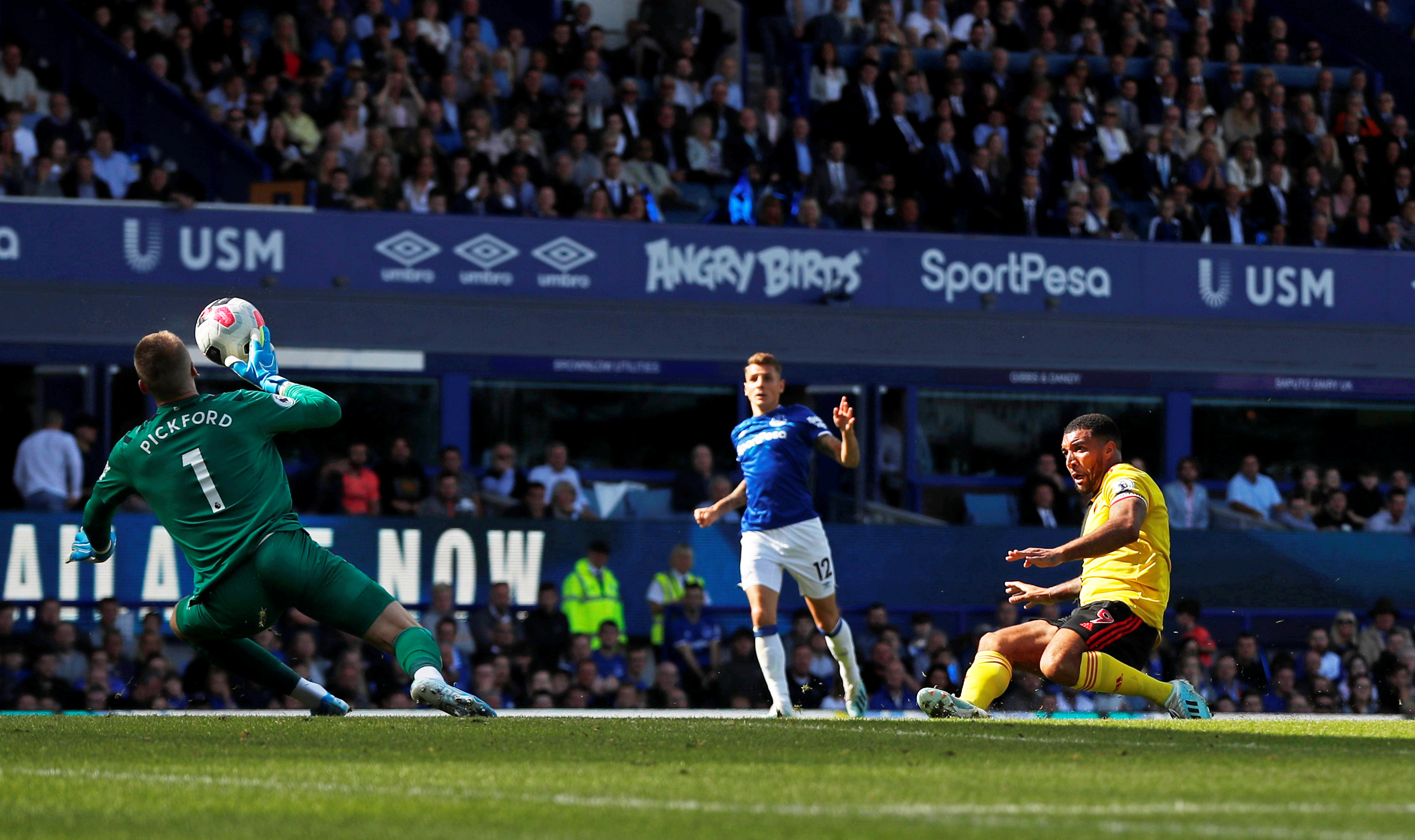 Deeney forced Pickford into an important point-blank save after an excellent Deulofeu pass. (Picture source: BBC)

Richarlison, again appearing against his former side, headed over the crossbar from an excellent Gylfi Sigurdsson pass having won a free-kick in a dangerous area. It was a frustrating game for their £50m man, who drifted in-and-out of the game, winning fouls and industrious out of possession as usual.

With the ball though, he was largely wasteful and squandered two promising chances to gift the hosts an unassailable lead after lax Watford marking. Replaced by Theo Walcott with 25 minutes to play, the game was gradually getting feisty and the hosts’ nerves intensified as time wore on.

Moise Kean and Danny Welbeck were introduced for their respective sides in attacking alterations, while Digne (hamstring) limped off to a standing ovation after picking up a knock – one Marco Silva was eager not to risk. There were impressive flashes of Kean’s physicality and flair in possession, while Bernard was close to topping his earlier effort with another marauding individual effort.

Eventually crowded out in the area, Everton were looking to close out a hard-fought win but that proved troublesome. Abdoulaye Doucoure spurned an opportunity to apply the finishing touch as a promising Watford counter fell to his feet, though Kean missed two chances after being teed up by Bernard up the other end. Firing the first one high and wide, his second squirmed narrowly past Ben Foster’s far post after the goalkeeper’s poor clearance.

Everton held firm despite five nervy minutes of stoppage-time to secure their first win of the new campaign, having drawn away at Crystal Palace last weekend.

Everton held firm despite five nervy minutes of stoppage-time to secure their first win of the new campaign, having drawn away at Crystal Palace last weekend.

Marco Silva’s men face Aston Villa and a League Cup trip with Lincoln before the month of August is over. The scoreline flattered Watford who need to improve quickly with tricky fixtures coming thick-and-fast: West Ham, Coventry (cup), Arsenal, Manchester City and Wolves are their next five games between now and mid-September.