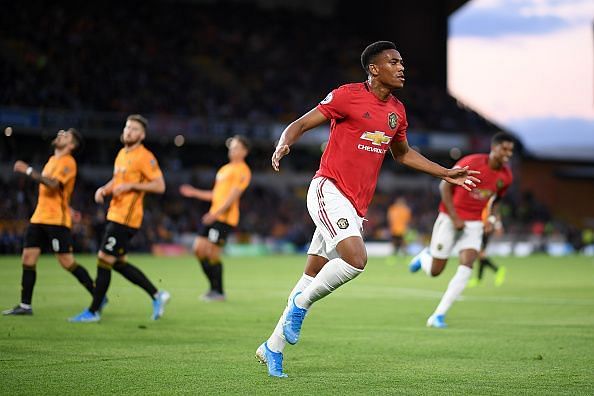 Ruben Neves’ stunning second-half strike ensured the points were shared during an intriguing watch at Molineux on Monday evening as Wolves drew 1-1 with Manchester United to end the week’s Premier League action in style.

Marcus Rashford teed up Anthony Martial, who netted his 50th United goal with a first-touch finish to break the deadlock after 27 minutes. During a tense first 45 not packed with many goalscoring opportunities for either side, the Frenchman took advantage and applied the finishing touch to a well-worked team move.

Raul Jimenez was causing the visitors all sorts of problems before watching his guided header cannon back off the post. A matter of moments later, Wolves were celebrating Neves’ superb effort from distance after it flew in off the crossbar to equalise after 55 minutes.

Midway through the second-half, Paul Pogba won a penalty after accelerating through a hoard of challenges on a marauding run being being tripped by Conor Coady’s trailing leg in the box. He stepped up to take it but Rui Patricio made an excellent diving stop to thwart the influential midfielder, moments after some spot-kick discussion between himself and Rashford: who took and scored one against Chelsea in their opening fixture.

Despite both teams pushing for a winner with time continuing to wear on, a draw was ultimately how it finished. Wolves continue to prove a bogey side for a resurgent United and with that in mind, here’s a look at five hits and flops from this game: 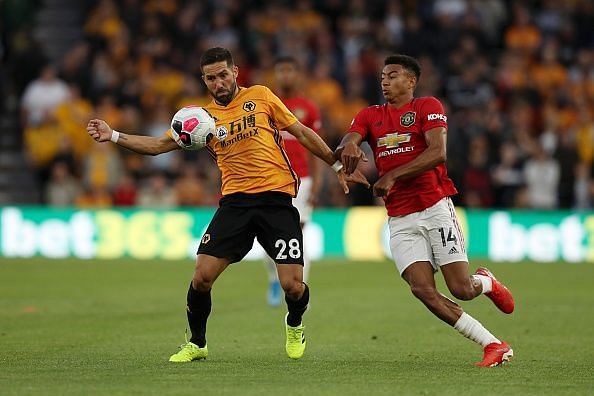 Well, where to start with Lingard? His heat map rather typifies what was wrong with his all-round display over the 81 minutes he featured before being replaced – something which should have happened sooner in truth. Operating in the number ten role, he started in too much of an advanced position to really affect things against a solid Wolves backline who packed their midfield to protect their backline against counter-attacking moves.

Once he dropped deeper and received touches in possession, you could see the Englishman gradually getting more comfortable under pressure and that was evidenced by the part he played in Martial’s opener. However, that’s about the only good thing he did throughout this encounter. For someone with as much creative responsibility as him, scarce promising moments of attacking link-up play is just not good enough. Especially away from home against a tricky bogey team who United haven’t beaten in their last four meetings.

He had 87% pass completion, won possession on six occasions, but only won three of his nine duels contested and lost the ball ten times. There were particular sloppy instances where he either miscontrolled possession or gifted it to a grateful Wolves player, while Jesse seemed almost bemused and found himself effectively stifled.

Skewing an effort well wide at 1-0 up proved crucial while he also failed to adjust quickly enough to react after Willy Boly’s deflection on Wan-Bissaka’s pass meant the pass moved just outside his shooting range inside the box. If he’s going to keep his starting berth, lacklustre displays like these are not helping his case. Having netted a well-taken brace against Chelsea last time out, Rashford turned creator on this occasion while displaying the qualities to justify why his versatility is a welcome addition and not a hindrance for Solskjaer against Wolves here. He created nine assists across all competitions last term and has already got off the mark in the 2019/20 campaign, though can consider himself unfortunate not to have more than one to his name from this encounter.

Operating ahead of Luke Shaw as a left-sided winger, the 21-year-old combined his pace and vision to good effect while retaining possession well and proving a nuisance for Wolves defenders too. 84% pass completion rate, he completed two crosses and one long ball while winning all three of his duels and drawing two fouls too.

He didn’t shy away from his responsibilities out of possession either, winning possession on five occasions while teeing up Martial perfectly with Shaw lurking closely midway through the first-half. His quick feet and invention near the byline saw him create a superb chance for Martial minutes beforehand. Having left Ryan Bennett for dead, he delivered a devilish cross but the 23-year-old was unable to connect before it swerved out for a goal-kick.

Like many, he drifted in-and-out of the game as time wore on before being replaced by Andreas Pereira in the dying minutes. After this display though, questions will continue to intensify: is it time Ole plays both up-top together? 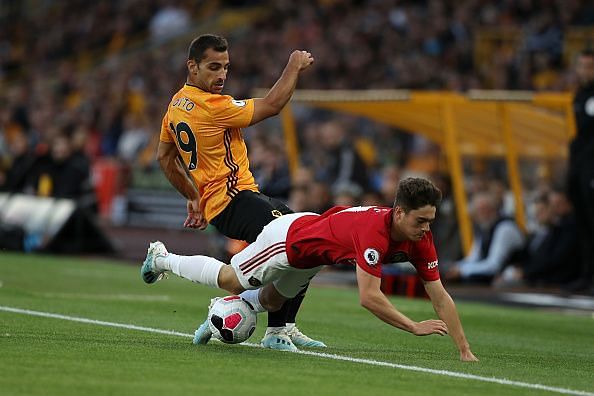 Even after a memorable cameo display on his debut against Chelsea last time out, Daniel James was a surprise starter on this occasion. It was either going to be a Solskjaer masterstroke, a naive selection or somewhere in-between.

Although he clearly tried, the Welsh winger largely disappointed and quickly provoked the ire of home supporters for his diving antics. Booked midway through the first-half for simulation after being doubled up on by Jonny and Diogo Jota, the 21-year-old flattered to deceive and decision-making was regularly poor to boot.

Despite having just 53 touches over the 90 minutes, he lost the ball a whopping 16 times and you could see Wolves players growing in confidence with their pressing tactic forcing him into mistakes or safe play to avoid playing teammates into trouble. To his credit, he won eight of 13 duels contested and was fouled on six different occasions: testament to just how rapid and troublesome he can be, once he gets going.

However, his crossing was dreadful. Six attempted balls into the box, none completed – while he only completed one of three dribbles attempted too. This was not good enough and not necessarily a surprise either, given how the Premier League is a completely different beast to Championship football. Nonetheless, a first league start to forget and one that will give those watching from the substitutes’ bench confidence for their first-team prospects going forward. 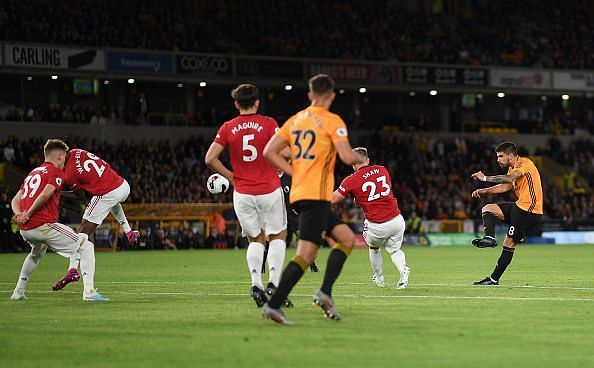 Perhaps the most scary thing about Ruben Neves is that he didn’t have one of his best games on this occasion. Yet he scored a beautiful finish at a pivotal moment, looked to keep things ticking over as usual in midfield and was tenacious out of possession against a United side stifled by Wolves yet again.

An honourable mention goes to Neves’ compatriot Joao Moutinho, but I’d be wrong if I didn’t put Ruben in after another quietly effective display – up until his rocket of an equaliser. He won three of nine duels, committed three fouls (only receiving a booking, Marco Verratti-style), made two clearances, tackles and interceptions while winning possession back on ten separate occasions over the 90 minutes.

Rightly kept busy alongside Moutinho and a less effective Leander Dendoncker as part of Nuno’s central midfield three, they soaked up pressure well and defended in numbers against a team who didn’t have a plan B in store and relinquished two points for their troubles.

Neves, 22, has an uncanny knack for knowing when to pop up with important strikes and goal-creating contributions when Wolves need him most. With that in mind, he also continues establishing himself as one of the PL’s best distance shooters too. Having been extensively scouted since flourishing with Porto in his teenage years, it will not be long before United and more of Europe’s top sides begin launching eyewatering bids for his services. 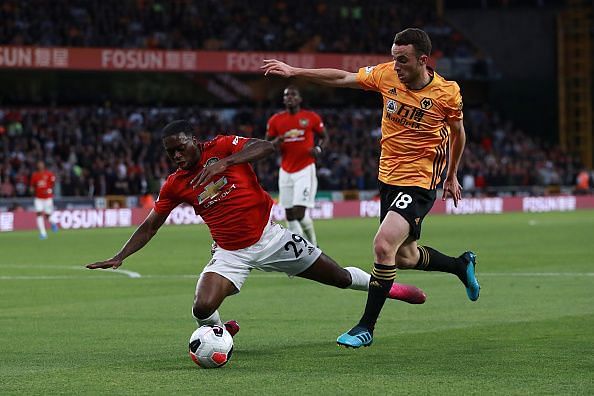 After an encouraging debut display last time out, Aaron Wan-Bissaka went from strength to strength during a difficult away trip on this occasion. Proving his worth while justifying the Spider nickname with his rangy long legs in full flow, the 21-year-old oozed class defensively while showing an added eagerness to work on the creative side of his game – often overlooked given his world-class defensive qualities.

Running tirelessly up and down the pitch, he battled hard against Diogo Jota and regularly came out on top against the Portuguese forward. He needed to be confident and composed with Daniel James looking shaky and vulnerable ahead of him, he did so with a nonchalant swagger beyond his years.

His match statistics speak for themselves: 11 of 14 duels won, nine tackles completed, won possession three times, two successful dribbles, one interception and clearance made. A game-high 115 touches proving he’s quickly becoming comfortable in possession and on another evening, he would have had an assist for his troubles but for Boly’s important deflection on his probing pass into Lingard after the break.

The only blemish on another impressive showing? He picked up a booking, albeit harsh from referee Jon Moss after a handball late in the second-half.