Liverpool maintained their 100% winning record to start the Premier League campaign with a 3-1 win over Arsenal, as Joel Matip and Mohamed Salah’s second-half brace gifted the Reds all three points at Anfield.

Despite the hosts’ early dominance, it could have been a completely different story for Jurgen Klopp’s men had Arsenal taken their chances before half-time. Pierre-Emerick Aubameyang spurned a chance with the goal gaping after an Adrian error, Nicolas Pepe squandered two promising opportunities and yet they found themselves a goal behind at the break.

Salah netted a ten-minute brace, helped by some characteristically poor David Luiz defending – but substitute Lucas Torreira scored his third Arsenal goal as a consolation with five minutes left, leaving the Reds slightly edgy as their wait for a first clean sheet continues. With all of that in mind, here’s a look at three reasons why Liverpool were victorious on this occasion: 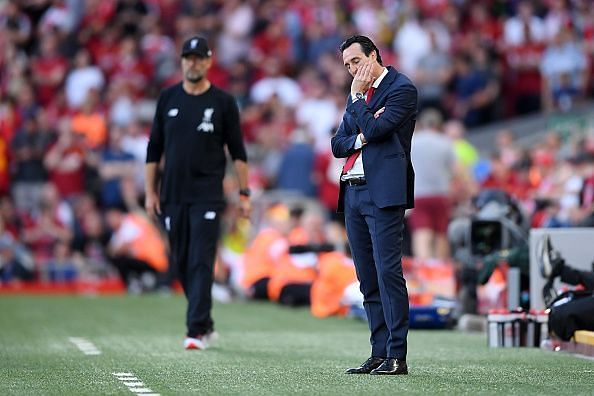 Emery endured a frustrating evening’s watch, having played into Liverpool’s strengths with his decisions

Emery’s decision to start with a 4-4-2 diamond was a pre-match surprise but equally a naive one too, especially away from home up against a team of Liverpool’s strengths. Their expansive style of football was essentially invited upon an Arsenal side who sat deep, were overloaded on both flanks and afforded their hosts too much space to create opportunities from the get-go.

After his encouraging showing against Burnley, £72m forward Nicolas Pepe was always likely to make his first league start here. However, that’s no justification for leaving Alexandre Lacazette on the substitutes’ bench until the 80th minute during a big clash, where you could see they needed the Frenchman’s attributes to link-up attacks better and involve more teammates to stretch Liverpool further.

Speaking of displays against Burnley, Dani Ceballos started in an advanced midfield role within Emery’s diamond but it was quickly evident the Spaniard was struggling to cope against Liverpool’s high-press, energetic style – one which saw him relinquish possession far too easily, far too often.

While Joe Willock acquitted himself well alongside Matteo Guendouzi and the returning Granit Xhaka, there was an overwhelming feeling that Lucas Torreira should have started somewhere in that holding midfield trident – goal aside – as the Uruguay international possesses the guile and bite big teams are uncomfortable playing against.

It felt as though Emery set his side out in a damage limitation exercise: counter-attack at speed with Aubameyang and Pepe, defend in numbers and hope for Liverpool errors. If they were to win on this occasion, a lot of things had to go their way. Simply not good enough.

#2 Weary Arsenal their own worst enemy 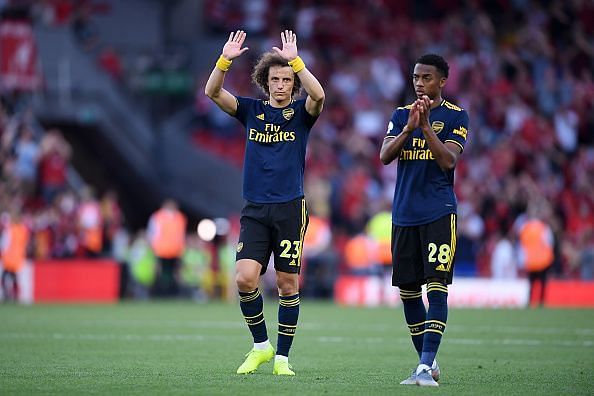 With the previous point in mind, Emery wasn’t on the pitch himself and some of the blame should also be levelled at his players for their largely disappointing displays. Criticism has long landed at Granit Xhaka’s feet and although he doesn’t do himself many favours, the Swiss international shouldn’t be scapegoated for their failures on this occasion.

Instead it’s the in-game approach and how it was applied, which gifted Liverpool a plethora of chances throughout. As previously mentioned, Ceballos was swallowed whole by a prepared Liverpool midfield trio – particularly Fabinho – who stifled the Spaniard’s creative abilities and reduced him to an anonymous role out of possession too.

Willock’s high-energy style was lauded as brave and encouraging to see from the 20-year-old, though he too wasn’t exempt from the same treatment either, barring a few solo dribbles on the counter.

Players looked dead on their feet after the hour mark and understandably so, having been overrun and bettered by a refined, more purposeful version of themselves.

Nacho Monreal was poor, Ainsley Maitland-Niles kept busy and Aubameyang largely ineffective in comparison to a promising Pepe alongside him, who really should have scored. Nevertheless, their biggest concern remains central defence. With Rob Holding (knee) returning in under-23s action yesterday and Calum Chambers watching on from the bench, I’d love to know how they felt watching on helplessly as £8m signing David Luiz defended as he usually does: poorly.

He was at fault for both Salah goals, in different aspects. The first was a needless act of petulance from a 32-year-old that you should really be expecting better from – he tugged at the Egyptian’s shirt in the box, leaving referee Anthony Taylor no choice in truth.

Salah made it three ten minutes later after a blistering run forward, but the Brazilian’s involvement in the build-up was equally grim. Already on a booking, he sprinted out towards him to apply pressure before being effortlessly left for dead. Sidestepping out of the way to show he didn’t touch the forward, Salah took his chance well and fired low into the bottom corner with aplomb. Luiz was again a beaten man. So much for that much-needed leadership!

#1 Liverpool overload, Mane and Salah prove too hot to handle 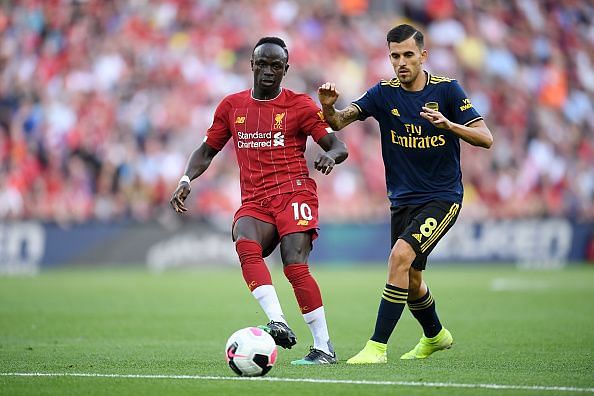 Despite no goal or assist for Mane, he proved a real handful for an Arsenal side who struggled to cope

Well, Arsenal knew they were in for a hard challenge but this proved one too much for Unai Emery’s men. That was something apparent from the opening ten minutes.

Arsenal sat deep, soaked up pressure and despite looking threatening on counter-attacking moves, there wasn’t much structure to their attacks. That made things easier to deal with from a defensive perspective, for a Liverpool backline who still have their doubts after conceding chances aplenty in recent weeks.

Liverpool overloaded them on both flanks with Andy Robertson and Trent Alexander-Arnold delivering a number of teasing crosses. On another day, the Reds would have easily doubled their scoreline just from the pair’s opportunities alone.

It resembled somewhat of a training exercise and seemed all too easy for the hosts, who were only truly in trouble for a ten-minute spell midway through the first-half and again once the game was dead and buried late on.

Despite his brace, Salah is notorious for blowing hot and cold: unselfish and wasteful at times, but ruthless at other points too once he gets going. Regardless though, you cannot afford to gift him the opportunities Arsenal did.

The same goes with Sadio Mane, who provided an ever-present threat down the flank in 75 minutes. Four key passes and tackles won, the Senegal international also won nine duels and probably should’ve headed Liverpool into a two-goal advantage before half-time.

Ultimately, the better side prevailed. Arsenal played straight into their hands though and clearly didn’t do their homework.