Despite conceding early to Nabil Fekir after 15 minutes, a depleted Barcelona side recovered to defiantly emerge as emphatic 5-2 winners over Real Betis at the Nou Camp following their frustrating 1-0 away defeat by Athletic Bilbao on La Liga’s opening night last Friday.

Fekir opened the scoring with a clever close-range finish, having been teed up by Loren Moron outside the area. It was the Frenchman’s first goal for Betis, having completed an £18m switch from Lyon last month.

His compatriot and fellow World Cup winner Antoine Griezmann equalised on the stroke of half-time, latching onto a probing Sergi Roberto pass before flicking past Daniel Martin’s fingertips. Griezmann, who himself sealed a big-money £108m summer move to join Barca last month, completed his brace with a curling strike into the far corner five minutes after the restart.

Carles Pérez doubled their lead six minutes later with a composed finish, stroking home after good work from Nelson Semedo before the wheels came off for the Betis’ backline. Poor defensive work saw Jordi Alba through with the ‘keeper to beat after Sergio Busquets’ defence-splitting pass and the flying fullback made no mistake. 4-1 up, they were not done there. Griezmann turned creator to tee up substitute Arturo Vidal, who tucked away a first-time finish to devastating effect from a tight angle.

For their efforts, the scoreline was harsh on the visitors. They were simply blown away by a 15-minute blitz after half-time but Moron – who assisted Fekir to break the deadlock – silenced the Nou Camp with a deadly finish of his own from distance.

It was merely a consolation but Barca showed significant improvement from their collective display last weekend while managing to survive a potentially damaging situation after conceding early at home. With all of that in mind, here’s a look at five hits and flops from Barcelona’s first victory of the new campaign: 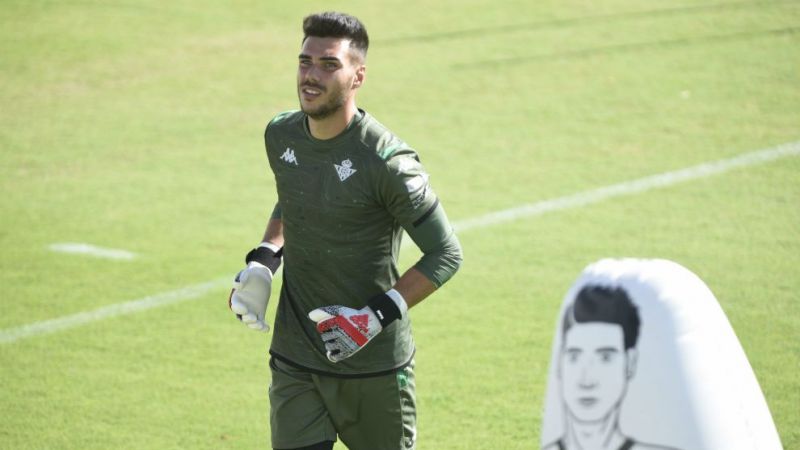 Despite his undoubted talent, Martin ultimately disappointed on this occasion and conceded five

The Spain under-21 international joined Betis on a five-year deal from Sporting Gijon for a reported £4.5m last month but will certainly be hoping to improve in the coming weeks.

Having conceded twice on his La Liga debut against Real Valladolid, he started again at the Nou Camp. Joel Robles, earmarked as their first-choice ‘keeper, is serving a three-match suspension after being sent off in the aforementioned defeat so this presented the 21-year-old with a golden opportunity to cement his credentials as their starting goalkeeper going forward.

Instead, he largely struggled and will have been disappointed to concede five goals against a depleted Barca side without Lionel Messi (calf), Luis Suarez (ankle) and Ousmane Dembele (hamstring) all sidelined through injury.

Barca registered 20 shots and had seven on target over the 90 minutes, though Martin didn’t have much to do in the first-half – barring Griezmann’s goal – and should have reacted quicker to stop a number of their goals.

Antoine’s first was prodded home from close-range and would have travelled at significant pace but despite getting fingertips to the strike, he’ll know he needed to do better there. That overriding feeling of frustration continued in a second-half where Barca peppered the Betis backline with their chance creation, something which was only going to end one way.

His second goal of the night was a tidy finish, as was Vidal’s for their fifth and final goal of the evening. However, Carles Perez’s effort was stroked home a little too nonchalantly while the same can be said for Jordi Alba minutes later to make it 4-1 at the time.

In both instances, had he shuffled his feet and reacted quicker, he would have made important saves to somewhat stifle the hosts’ attacking rhythm. Instead, Betis were comprehensively beaten and their last line of defence failed them when they needed him most on three key occasions. 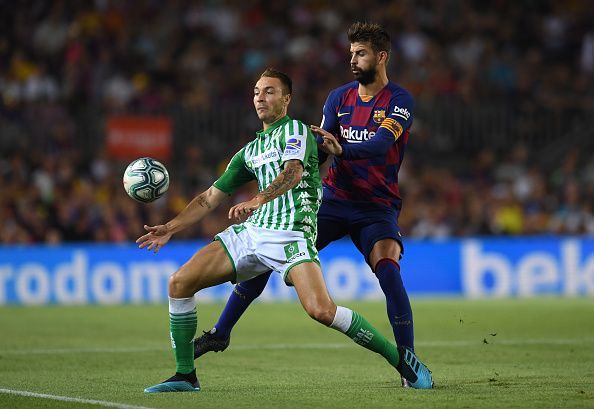 I could have picked a handful of Barca players at #4 but that would be doing forward Loren Moron’s display a real disservice. The 25-year-old created Nabil Fekir’s opener with a defence-splitting pass that left Gerard Pique and their backline in all sorts of disarray, while silencing the Nou Camp after letting fly from distance with a special individual effort after 79 minutes.

The overall reaction from supporters would have been completely different had Betis still been in the game at that point, but most chose to stand and applaud a brilliant finish from one of very few visiting players who persisted working hard despite their increasingly large deficit. Netting his 15th La Liga goal, it arrowed beyond Marc-Andre ter Stegen into the top corner and was just what he deserved.

Elsewhere, he won possession on three occasions, completed one tackle, interception, blocked shot and clearance while also winning four duels and was constantly making himself a nuisance even despite Barca’s second-half surge.

In 33 league appearances last term, he netted six goals and created one assist as Betis finished 10th. This season, he already has two goals and an assist after two appearances. Should he sustain this level of productivity in the final third, Betis have themselves a gem on their hands. 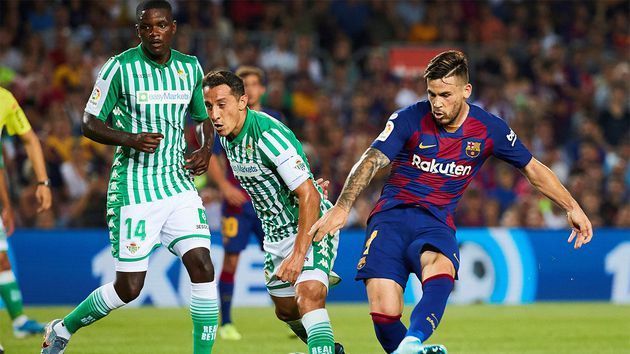 Guardado (left) was bypassed too easily, too often and the visiting captain struggled before being replaced

For this spot, it was between William Carvalho, former Barca winger Cristian Tello and captain Andres Guardado. They were all ineffective in different ways on this occasion, but I ultimately went with their lacklustre midfield general – unsurprisingly hooked shortly after the hour mark.

If you look at the build-up to Barca’s second, third and fourth goals, where is Guardado? He’s either ball-watching and not occupying a defensive position to affect play or being bypassed too easily, left in a player’s wake as they approach goal. It’s part of the reason why he didn’t complete any tackles, only won one duel and struggled as Barcelona overwhelmed their visitors with a relentless stream of attacks.

Losing possession on ten occasions and completing less passes (nine, 64% success rate), makes for grim reading. He was poor and for the captain to struggle in such fashion against an exploitable Barca midfield really set the tone. 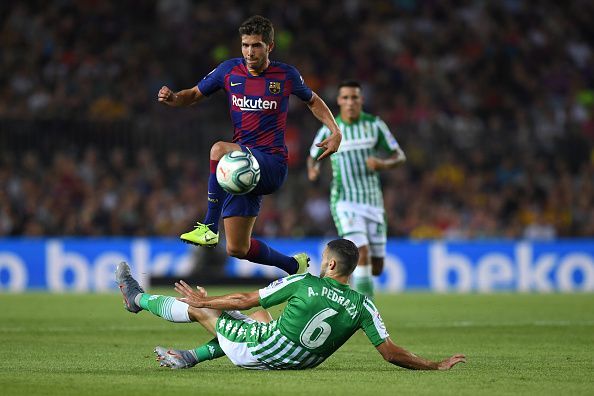 Roberto was busy, creating two important assists at a time where his influence was needed most

After an average display against Bilbao last time out, Sergi Roberto proved precisely why he favours a central midfield berth over the right-back role he has often been shoehorned into in recent seasons.

He created three key passes, both assists for Griezmann’s brace and was kept busy throughout – but relished the challenge against a Betis midfield packed with experience and ability to stifle. Despite a promising start, they failed miserably and that was in large part due to Roberto’s tenacious efforts.

While his second assist was overlooked given Griezmann’s quality finish from range, the inch-perfect delivery he swung into the box for Barca’s equaliser set the tone for their recovery and was begging to be met by a teammate. 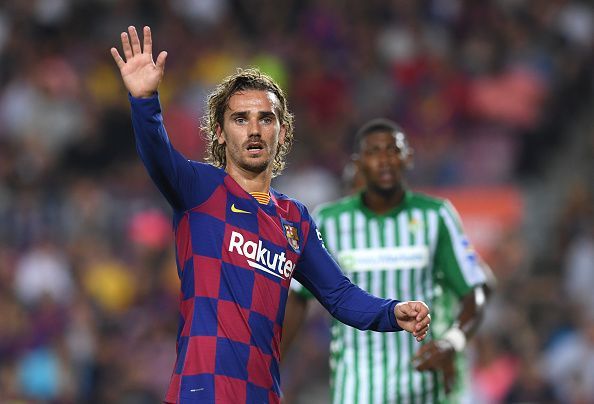 After enduring a frustrating debut last weekend where he regularly dropped deep and found himself constantly isolated, this proved a welcome return to goalscoring form for Griezmann.

He equalized just before half-time with a clever finish – benefiting from a hint of goalkeeping fortune and an excellent Roberto pass that Marc Bartra should have covered better in the build-up.

However, it was a brilliant curling strike which nestled into the bottom corner for Barca’s second shortly after the interval before turning creator with a clever first-time pass to tee up Arturo Vidal in transition on the edge of the area as they turned on the style. With Lionel Messi and Luis Suarez both watching on from the sidelines, he delivered a confident display as he looks to prove he can combine with the pair in attack going forward.