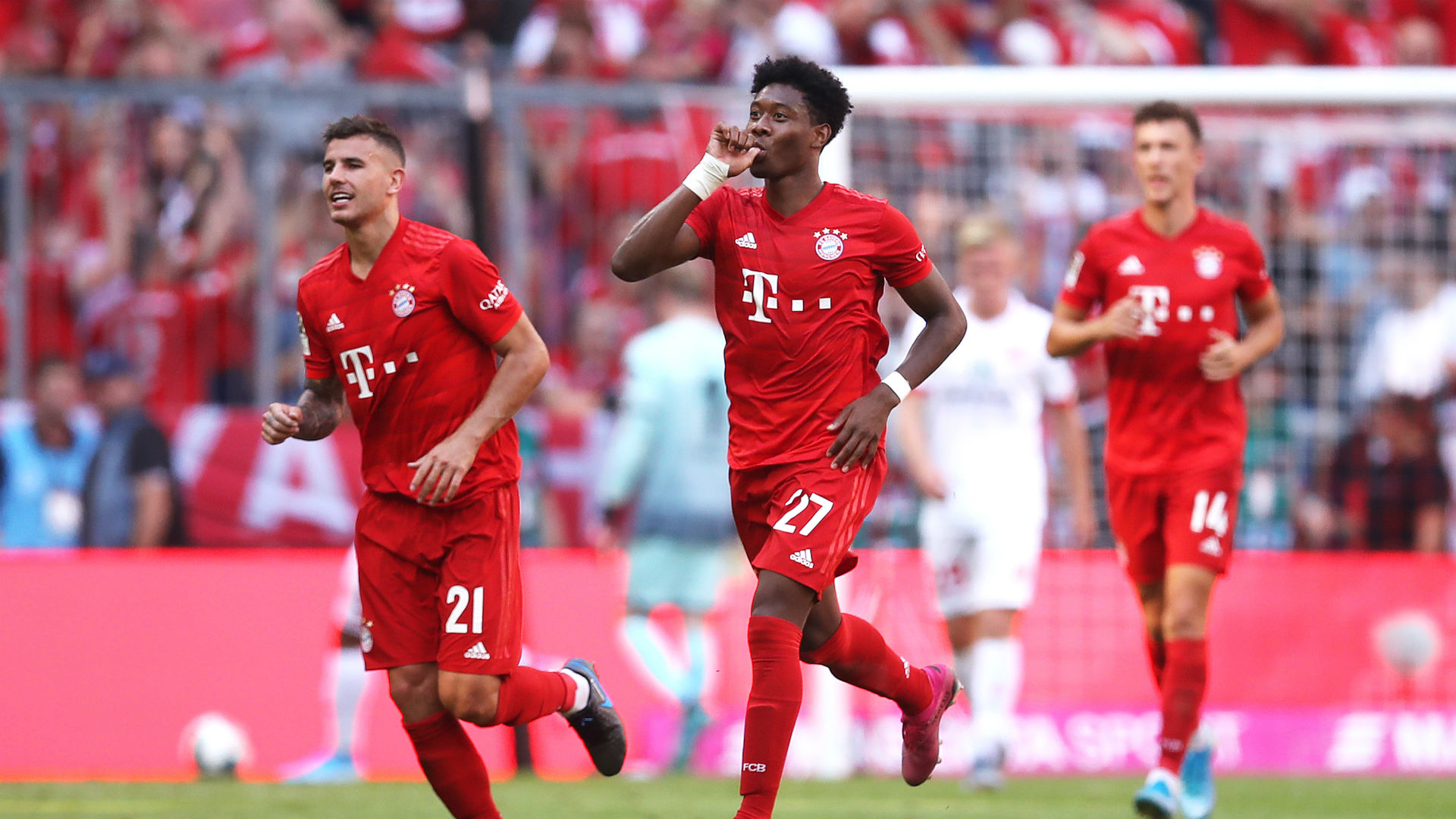 Bayern Munich recovered from an early deficit to thump Mainz 6-1 at the Allianz Arena, earning their second successive Bundesliga victory in style on Saturday afternoon. Goals from Benjamin Pavard and David Alaba propelled the hosts into a 2-1 half-time lead after winger Jean-Paul Boëtius’s headed finish stunned them into silence six minutes in.

Then though, they made their dominance and chance creation count. Ivan Perisic, Kingsley Coman, Alphonso Davies and Robert Lewandowski – who recently penned a new contract extension – all got on the scoresheet as the defending champions put their visitors to the sword.

With all of that in mind, here’s a look at three reasons why Bayern were victorious in such emphatic style in this one:

#3 Incessant pressing from the front set the tone 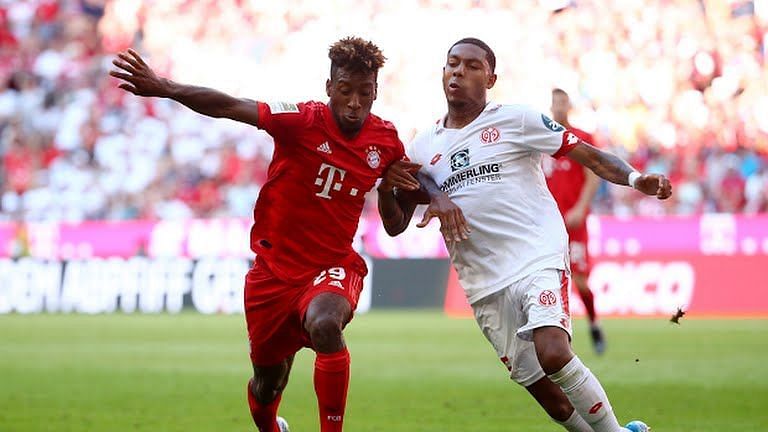 Coman was among the players regularly pressing from the front, harrying Mainz into mistakes aplenty

Niko Kovac’s men set a high tempo from minute one, with the likes of Coman and Perisic pressing from their forward positions out of possession. Naturally, it limited time that Mainz players had on the ball but equally frustrated the rhythm with which they looked to play into open spaces through midfield.

So you could understand the collective surprise around the ground when Manuel Neuer found himself picking the ball out of his net after six minutes, as Boëtius’ header came against the run of play and presented the visitors a slender lead to protect.

Nonetheless, Bayern responded in typical fashion – using the goal as motivation to push harder, probe further and continue in their pursuit of goals themselves. It paid off with a very one-sided scoreline, though it was a collective effort to get themselves back from a potentially worrying situation, even at home with the numerous individual talents they possess. Despite the heavy defeat, this could have been a completely different game. Mainz only registered seven shots over the 90 minutes, four on target – but their lack of total possession (33%) meant their best opportunities often stemmed from counter-attacks.

That’s not to say they don’t possess respectable creative threats either: Boëtius is an excellent player on his day, while captain Danny Latza and former West Ham midfielder Edimilson Fernandes have previously displayed their attacking capabilities in possession too.

It was disappointing to see Alexandru Maxim and Levin Öztunalı again unused substitutes, though 21-year-old right-back Ronaël Pierre-Gabriel impressed despite the defeat on his Mainz debut and was arguably their best player on both sides of the pitch.

With all of that in mind, Bayern’s backline needed to stay switched on and prepared to effectively deal with Mainz’ aforementioned threats – as evidenced by their early opener. Pavard and Alaba may have notched up the goals, but between them and centre-back pairing Sule-Hernandez, they made 71 defensive contributions over the 90 minutes to keep their visitors at bay.

Pavard was probably the best and most impressive from that quartet: one clearance and tackle, three interceptions, won possession six times with eight duels won to accompany his first Bayern goal and assist to boot. But they all had their part to play and in comprehensive victories like these, their efforts often go unnoticed. 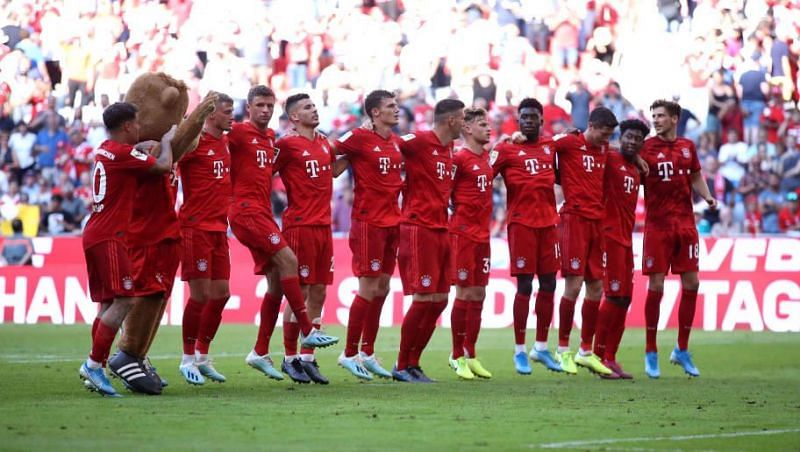 After constant waves of Bayern pressure, Pavard levelled the scoring after 35 minutes with a well-struck downward volley which cannoned in off the crossbar. Mainz were frustrated, but things were about to worsen before the half-time break.

Ivan Perisic and Robert Lewandowski both went close with respective efforts, before the latter was hauled to ground unceremoniously by Alexander Hack as he broke forward in a dangerous area outside the area. David Alaba let fly from distance with the resulting free-kick, watching as his sweetly-struck bullet arrowed into the top corner.

It was the Austria international’s first goal since their title-clinching win over Eintracht Frankfurt on the final day last term and he couldn’t have picked a more opportune time to score it either, on the stroke of half-time. But they were not finished there.

Perisic made no mistake to head home from Pavard’s inviting delivery ten minutes after the restart, capitalising on some sloppy defensive marking to convert beyond a helpless Florian Muller. Ten minutes later, Coman got on the scoresheet – slotting into the bottom corner with a neatly-placed first-time strike after Joshua Kimmich’s clever cutback. It was suddenly getting ugly and Kovac made a double alteration soon afterwards, with Thomas Muller and Alphonso Davies being introduced.

Lewandowski got the goal his tireless hold-up play deserved, having been teed up by Muller. His first touch was immaculate and he let fly, watching it take a little deflection on the way through as it cannoned in off the far post. Davies made it a super six after a well-worked team move rewarded his movement with an open goal finish across goal, again being fed by Muller.