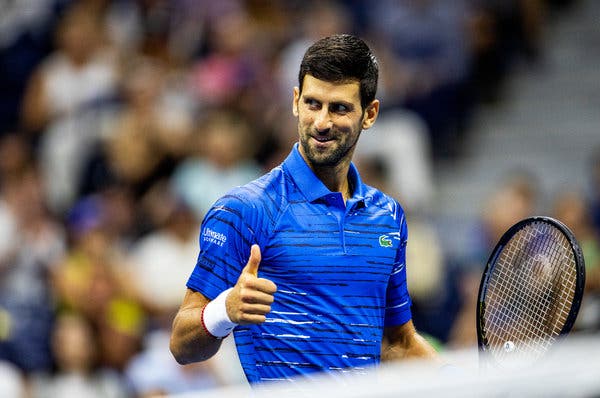 Questions over Novak’s shoulder injury were understandable, with many fearing it could affect him too much ahead of this encounter. Within minutes, he silenced those fears against a bullish Kudla – who currently at world no. 104 really should be ranked higher – while proving his championship mettle.

He applied the finishing touch during a fantastic rally to go 3-1 up early in the first set, while displaying the type of swagger that we’ve grown accustomed to from the world number one. It could have easily turned into a procession and the match could have been completed in around 90 minutes, though Kudla stuck around to force the Serb into some difficult spots.

That was evident at 4-2 up, as Novak lost three successive points and gifted his American adversary a break back opportunity. Fortunately, he dug deep to save two points on serve and earn a 5-2 lead – a theme which continued throughout when he found himself in precarious situations.

Despite not exactly playing his best tennis, Djokovic importantly found a way to win. He made 10 unforced errors in the opening set – most of them careless – while his serving consistency was still patchy, despite a tendency to hit harder on second serve attempts. Looking at the statistics, he would have been pleased by his second serve success, winning 9/13 points (69%), in comparison to Kudla’s disappointing 33% (3/9).

The second set continued in similar fashion, despite an encouraging start from the American to earn a quick service hold. He saved two break points at 1-1, but Novak was more aggressive as he intensified his pursuit of a break. Despite a few difficult stretches, the 32-year-old earned his way ahead at 3-2, with some deft drop shots, eyecatching winners and regularly finishing rallies with an emphatic stamp on proceedings.

For all his efforts, Kudla looked in disbelief. Djokovic came back for more, his on-court awareness and awe-inspiring defence on display – making him fight harder to win points.

Kudla held firm on his remaining service games, though the damage was already done. Despite a few potential hiccups on serve, which would have given the 27-year-old renewed confidence, Novak delivered some timely aces. Whether he had just lost a rally, double-faulted or made a surprising shot-selection error, Djokovic knew precisely when to raise his level that bit higher to push Kudla out of contention, maintaining control.

Despite pushing too hard to finish the set when up 5-3, he eventually earned a two-set lead not long afterwards. Kudla’s fast feet and good anticipation proved key to help him win some long-lasting rallies but it was only delaying the inevitable.

Having earned an early break of serve, Djokovic put his foot on the proverbial pedal. Kudla’s level hadn’t dipped either, he was just too good and oozing confidence against a potential banana skin – injury or otherwise. Kudla rallied back to 3-2 in the third after failing to convert more break point opportunities.

He swiftly went from 3-2 to 5-2 down, losing his serve once more despite promising half-chances to claw his way back into proceedings. Djokovic served for the match and gratefully completed the job after two hours five minutes, booking his place in Round Four without any issues.

As previously mentioned, Novak will face Wawrinka in a rematch of their 2016 US Open Final. On that evening, he lost in four tightly-contested sets but must hope that he can capitalise against the Swiss star. They haven’t played in the three years since but Djokovic boasts a very favourable H2H record, currently standing at 19-5.

Post-match, Novak revealed he played this one with less pain than Wednesday, but it still lingers. Naturally he will not want to make excuses, particularly as we go deeper into a Grand Slam tournament, but his durability hasn’t been fully tested yet – nine sets, no trouble yet. That could all change on Sunday.

Anything can happen, but Stan is highly motivated and eager to silence those doubters – having picked his moments to shine when called upon against the better ATP players in recent seasons. It makes for a tantalising clash.