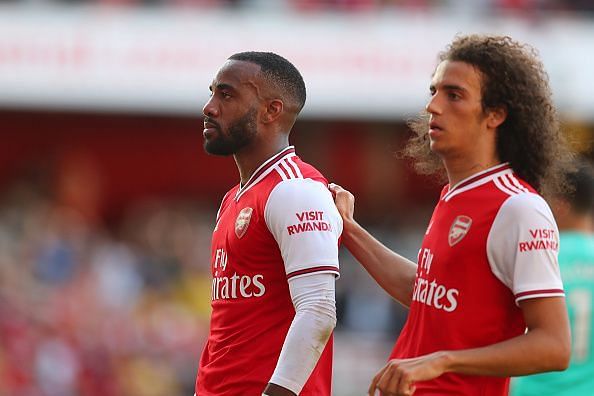 Arsenal recovered from two goals down to earn a hard-fought point against Tottenham during a frenetic north London derby. Goals from Alexandre Lacazette and Pierre-Emerick Aubameyang salvaged an important point for Unai Emery’s men ahead of the international break, after Christian Eriksen and a Harry Kane penalty gifted Spurs a 2-0 cushion.

The Gunners thought they had completed the ultimate comeback, though centre-back Sokratis saw his close-range finish correctly ruled out for offside as Sead Kolasinac strayed beyond the last defender before fizzing a cross across goal, while Kane had a penalty appeal waved away late on with tempers flaring in an unpredictable second-half.

Goalkeepers Bernd Leno and Hugo Lloris were kept busy as both sides pushed hard in their attempts to snatch a late winner, though the points were ultimately shared and bragging rights even for now.

The result means Arsenal miss the opportunity to go third before the two-week break, while Tottenham record their second draw of the campaign after four games – they are level on points with Manchester United, Sheffield United and Chelsea in ninth place. With all of that in mind, here’s a look at three reasons why the Gunners drew on this occasion:

#3 Their second-half persistence paid off 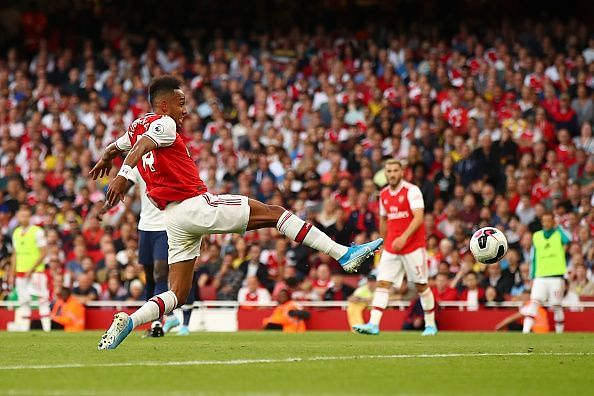 Arsenal have an age-old tendency to be reactive, rather than proactive, when it comes to big games. They find themselves in difficult situations and are forced to respond, having conceded or finding themselves under the kosh at moments through some self-inflicted issue that should have been prevented.

With that being said, they also can flatter on the eye without having goals to show for their dominance. They were almost victims of that same fate on this occasion, even with an inspired Hugo Lloris eager to keep them at bay – despite some hairy moments from the World Cup winner himself. However, their persistence proved pivotal to rescue a point during a match they should have earned all three in, with the match stats speaking for themselves.

The first-half was fairly even, but the second was dominated by the hosts. Spurs fashioned the bulk of their opportunities from counters, where Arsenal players were wearily getting back and caught out by pace and incisive passes. However, they registered 17 shots, far more dangerous attacking moments and Tottenham were overwhelmed by the waves of pressure in their half. Action zones showed for the match was largely played in Spurs’ own half (60%), while constant pressing and increased pass combinations between Arsenal players meant they had to work harder to win back possession.

Lacazette, Matteo Guendouzi, Nicolas Pepe, substitute Dani Ceballos and Kolasinac all had great chances to score. That is ignoring Sokratis’ goal, ruled out by VAR and Aubameyang’s equaliser with 20 minutes still to play. Opportunities were regularly created but they failed to take them against a grateful Tottenham side in survival mode for sustained periods.

Despite their successful efforts to get back into the match, Arsenal shouldn’t have found themselves in that situation to begin with. Sure, they were busy defensively during specific spells – but that’s to be expected, given Spurs’ attacking prowess.

Nonetheless, that doesn’t excuse the effortless way they gifted two goals against their north London rivals. On another day, they would have been duly punished to a point of no return. Fortunately though, Tottenham have been increasingly poor defensively in recent times and that was again the case on this occasion.

Christian Eriksen broke the deadlock from close-range after nine minutes, netting his 50th Premier League goal by doing so. It was undoubtedly his easiest and most straight-forward finish, the subsequent celebration showing the Denmark playmaker could not believe his luck. His anticipation and movement in transition proved key, reacting quickest to pounce after Bernd Leno‘s weak parry from Heung-Min Son‘s effort saw the ball trickle across into the 27-year-old’s path. With the goal gaping, the wantaway midfielder made no mistake.

Then for the visitors’ second, enter another inexcusable individual error. Last week it was David Luiz being given the run-around at Anfield. Leno should have done better to either clear his lines or smother the danger from Son’s effort, but Granit Xhaka‘s involvement in Spurs’ second strike was naivety at its finest.

He lunged in with a needless slide tackle, as the Switzerland international so often does, missing the ball completely and scything Son to ground in the box. Kane slammed home from the resulting spot-kick and Tottenham found themselves a comfortable cushion without truly breaking a sweat inside 40 minutes. Worrying isn’t quite the word to describe the way Arsenal concede goals.

#1 Excellent displays by Lacazette and Guendouzi 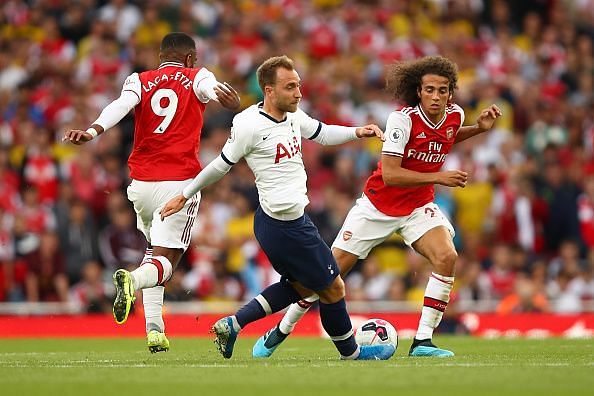 The pair pressing Eriksen out of possession typified their performances, infectious and effective throughout

Lacazette halved the deficit with an all-important, emphatic finish just before half-time, leaving Lloris with no chance at his near post. That goal gave Arsenal forward momentum at a decisive moment as supporters’ restless energy could have transferred to the players and seen them struggle to recover after the break.

Instead they returned purposeful and full of relentless running, propelled by a Frenchman who didn’t start last weekend but played a part in their consolation goal at Anfield mere minutes after being introduced. He won countless duels, held up play well and frustrated an unconvincing Tottenham backline, while doing his bit defensively and winning possession on seven occasions – while coming out on top in 19 duels too.

If for better anticipation from Kolasinac, he would have earned a matchwinning assist after a clever headed flick-on across the box and although still not 100% fit, the chorus of boos reverberating around the Emirates when substituted for Henrikh Mkhitaryan (67′) reiterates just how important he is to Arsenal.

Despite his excellent passing, Granit Xhaka was poor. Lucas Torreira was typically solid, though the youngest of Emery’s midfield trio proved the integral component here. Matteo Guendouzi, who divides opinion over his role in the team, was fantastic and relished battling against a Tottenham midfield who have already been exploited this season, while tirelessly pressing and being methodical with his passing too.

Many have claimed the 20-year-old is too defensive-minded to thrive in a central role, but this display proved he can do more than just defend: creating a Mesut Ozil-esque defence-splitting assist for Aubameyang’s equaliser. Quietly brilliant up to that point, he delivered another workmanlike display while covering ground effortlessly and keeping a level-head, which isn’t always easy when most of your teammates do the opposite. Instead, he channelled his passion into an infectious midfield performance and impressed throughout.